I’ve been playing the same fight in Thronebreaker, Gwent’s standalone story, for a few hours now. I still haven’t beaten it. In most games, that would make me frustrated with myself or furious at the designers. But thanks to Thronebreaker’s unique mechanics, I’m itching to keep trying.

Thronebreaker is the single-player standalone accompaniment to CD Projekt Red’s Witcher card game Gwent. You play as Meve, the queen of Lyria and Rivia, as she repels invading forces and solves murky moral issues around her kingdom. These play out as either dialogue choices with suggested far-ranging consequences (your standard Witcher fare) or, more frequently, as card-based battles against humans, non-humans, and monsters.

You navigate the world by clicking around and occasionally coming upon nodes that give you the resources you need to craft your Gwent deck. The isometric world is gorgeous and detailed, and the characters you encounter are well-acted and have interesting stories to tell. I haven’t found myself bored while watching cutscenes of 2D static characters and their scrolling dialogue, thanks to the strong writing and brevity of the scenes. The world navigation itself can get clunky and a little repetitive—go here, click this, go there, click that—and I’ll admit that I’m a little less invested in The Witcher universe overall when I’m not playing Geralt. But I’ll take a little pointing and clicking to get to Thonebreaker’s battles. 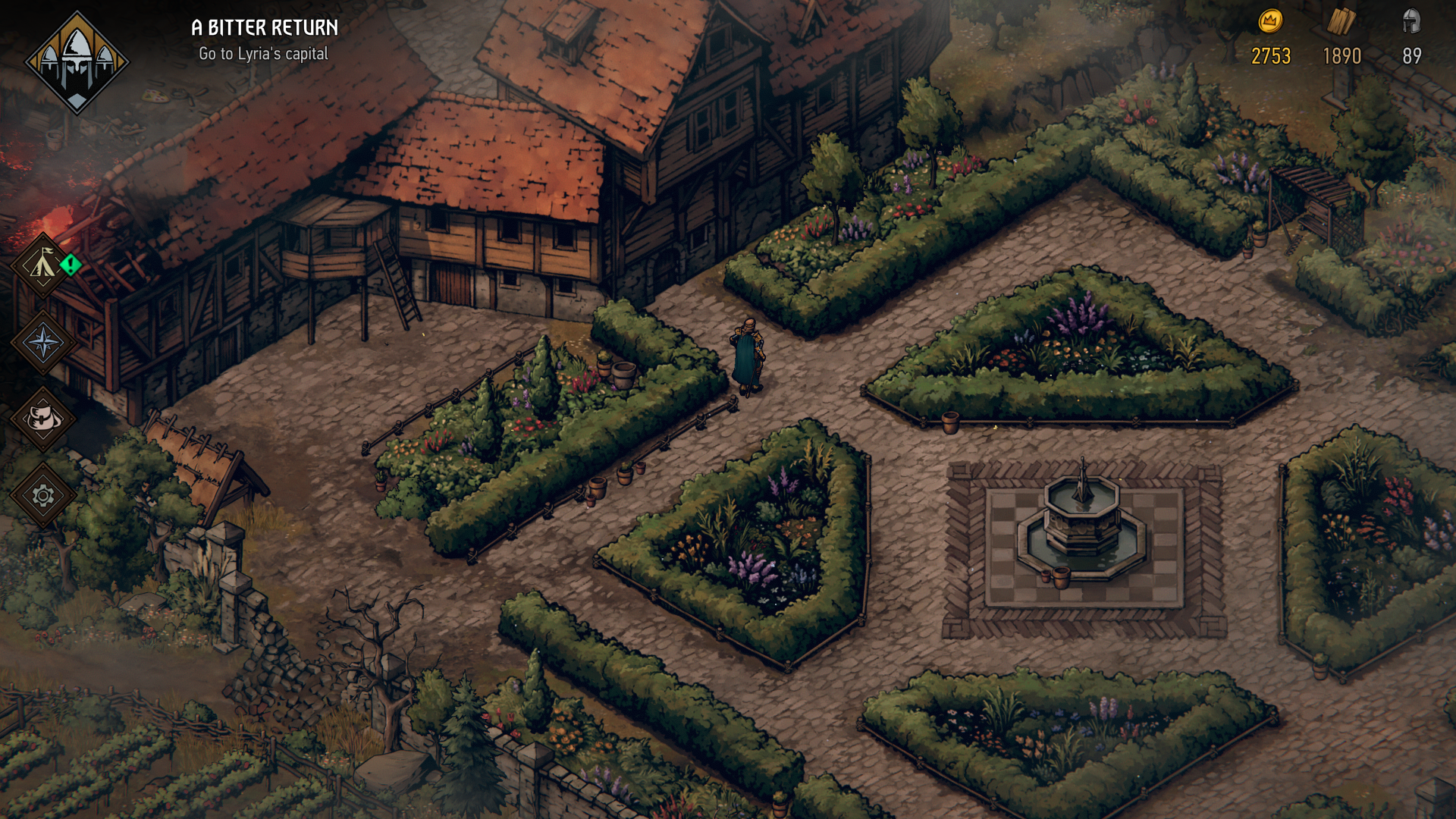 Since the launch of its closed beta in 2016, Gwent has mostly been a multiplayer game, with occasional special events featuring matches against AI opponents that have unique mechanics. In Thronebreaker, these special games are the stars of the show. In my 10 hours with this new single-player game, I’ve encountered only a few standard three-round, highest-points-wins fights. Some of the battles are puzzles; you’ll have to stop boulders from falling, or reduce all enemies’ health to a certain amount without killing them. Many of these puzzles have been optional, as well as quite tricky, but they’re clever and satisfying. I’ve managed to beat most of the ones I’ve encountered after a few tries, but a few still have me scratching my head.

These puzzles tend to give you a unique deck to play with, as opposed to letting you choose your cards. Usually, Gwent is heavily based on crafting the right cards and arranging them just so in your deck, but the special decks used in these puzzle sequences guarantee that you have all the tools you need to triumph. That can make defeat all the harder to swallow, but it’s a nice change from getting trounced in multiplayer because I don’t have the right units. Gwent itself has also changed a lot since I last played, with a smaller board to play on and new mechanics that make my head spin. These puzzles have been a good way to learn about and experiment with some of these changes, though I’ve barely scratched the surface of what the Gwent overhaul has to offer. 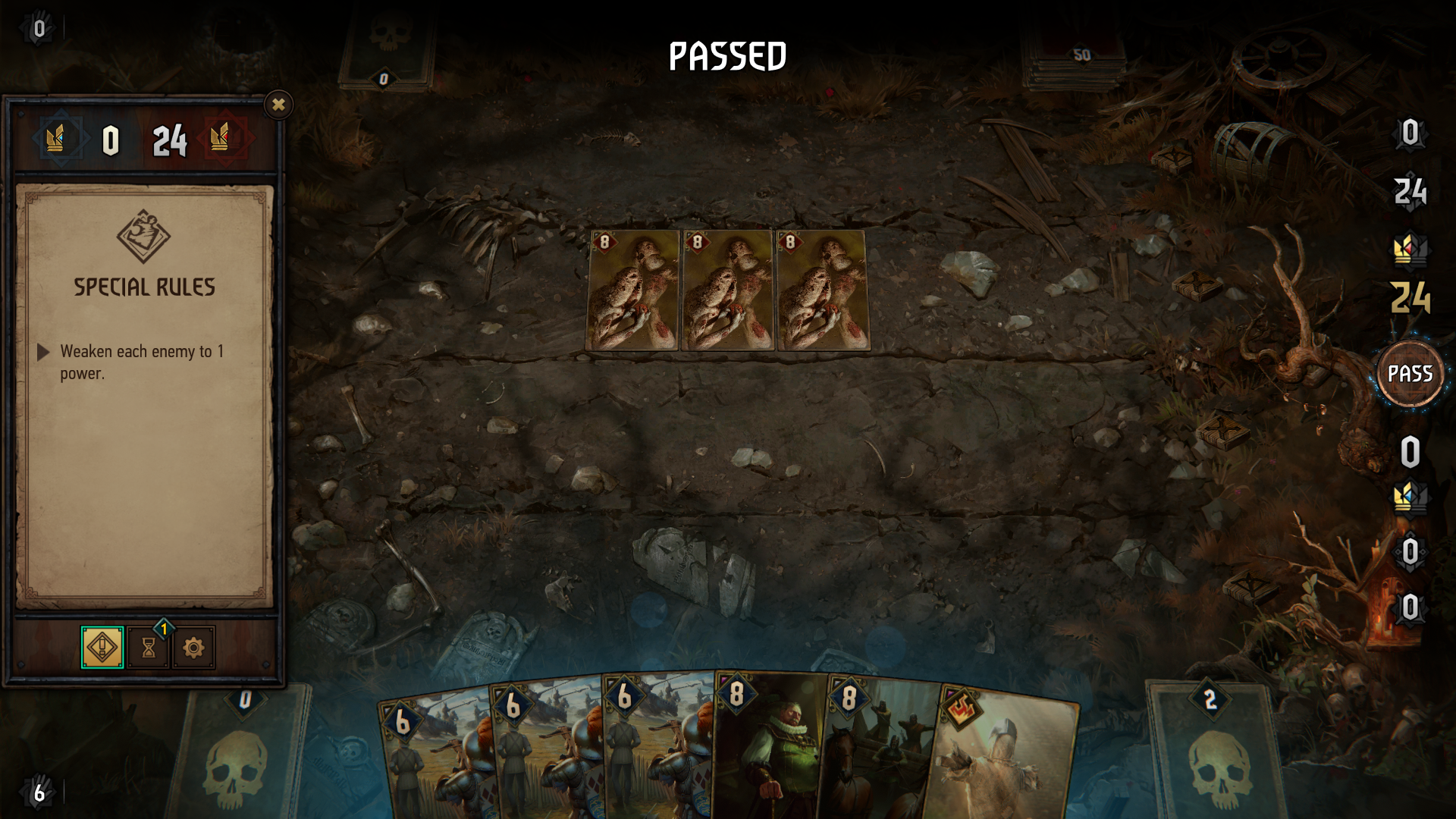 Outside of puzzles, many of Thronebreaker’s battles also have unique mechanics. The fight that I’ve been stuck for a while now is against the forces of Skellige, whose ranks include an enemy who starts at 150 strength. Each turn he battles the highest unit on the board, whether on your side or his, and takes damage equivalent to their strength. According to the special rules of the battle, beating him is optional, but given that he can destroy my highest units and the rest of his compatriots buff themselves, I’ve been focusing (perhaps to my detriment) on targeting him.

I’ve been playing this battle over and over, deploying my units in new orders and configurations, backing out to change up my deck, trying to suss things out. Buff my own units? Nope. Try to focus on getting him to fight his own guys instead of mine? Not working. Watch a video of CDPR’s community manager beating the battle and try to learn something? Only makes me feel a little bad about myself when I can’t quite copy his strategy. This battle is pretty early on in the game, and I’ve been chalking up my struggle to my own misplays and the way that my passion for Gwent far outweighs my skill.

In a straightforward multiplayer battle, losing this often would be frustrating, but in Thronebreaker, the challenge is exciting. The special rules and the game’s guidance (I haven’t been able to craft my deck much at this point in the game) mean my success comes down to me, and I can’t blame my failings on my deck. I know I can do it, I just have to figure out how. Even as I write this, miles from where Thronebreaker is sitting on my PC, I just want to run home and give it another shot. That’s a rare feeling for me when I’m stuck in a game.

When Homecoming, CDPR’s major revision to Gwent, launches next week, I think Thronebreaker will take its place as a welcome companion to multiplayer. Through focusing on special fights, CDPR has taken one of multiplayer Gwent’s strongest features and added it to the world-building and storytelling that make The Witcher series so captivating. Combined, they’re an intriguing, challenging game all their own.

Thronebreaker and Homecoming both launch 23 October for PC, with console versions to follow on 4 December.