Adapting A Magic: The Gathering Card Into A Life Size Cosplay Weapon Is Cool

By Cameron Kunzelman on at

There are quite a few equipment cards in Magic: The Gathering that get players excited, but the ever-scary Bonesplitter has been cleaving through enemies since it was printed in the Mirrodin set fifteen years ago. And now you can see how you might recreate it in real life.

The YouTube channel Odin Makes is generally centred on cosplay builds and prop recreations, and so it is particularly inspiring to see host Odin take a 2D image from a Magic card and transform it into a short, brutal foam and wood axe. 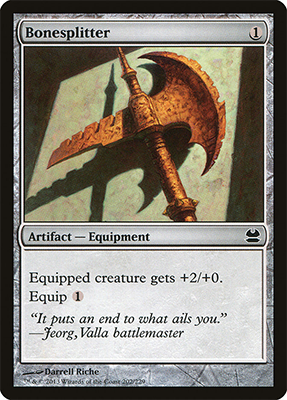 When you play Bonesplitter in Magic, you’re generally putting it into the hands of a flying fairy or a rambunctious goblin. It makes a creature more powerful, so it can “trade up” by destroying creatures bigger than it or by flying over blockers to smash your opponent in the sky. And wouldn’t you know it, but this physical version of that axe looks exactly like it belongs in that exact scenario. Just imagine handing it off to a avian human who will use it for big air battles.

Odin Makes has done several game-centred builds, including a Super Sledge from Fallout 4, a Pip Boy, and the Leviathan Axe from God of War.