Thoughts From a Destiny 2 Latecomer

On my PlayStation 4, it’s still the late summer of 2017, because I’m in the early stages of Destiny 2. So far it’s both better and worse than I expected.

I also waited a year to play the first Destiny, which meant I missed out on the Loot Cave, the first disappointing early expansions and something else about engrams of one colour decoding as items of an inferior colour. I must be remembering that last part wrong, because surely no one would have implemented such a silly system.

When I got to the first Destiny, I loved it. I was playing right after a big patch and right before the Taken King expansion that rehabilitated the game’s rep. I don’t play competitive multiplayer, but I spent dozens of hours running through that game’s PvE missions and quests and co-op strikes. I even did a couple of raids. Great game!

Waiting a year had gone well for me the first time, I figured I’d do the same thing in Destiny 2. It’s too early to say if I made the right choice again, because I’m still very early on. My character’s power level is a little over 100. I’ve cleared a few missions on Titan. I only have one exotic piece of gear and am mostly stocking green and blue class weapons.

Here’s a running tab of my observations as they arose for me in the past week, pro and con:

Liked - The Instant Nostalgia: One of my favourite things about Destiny 2 so far is how it began with some reminders for me about all the good times I had with Destiny 1. Here’s a sampling of the things it flashed before me when I finally booted the game up on 30 August.

There was my colleague Kirk helping me through the end of one of the original game’s expansions... 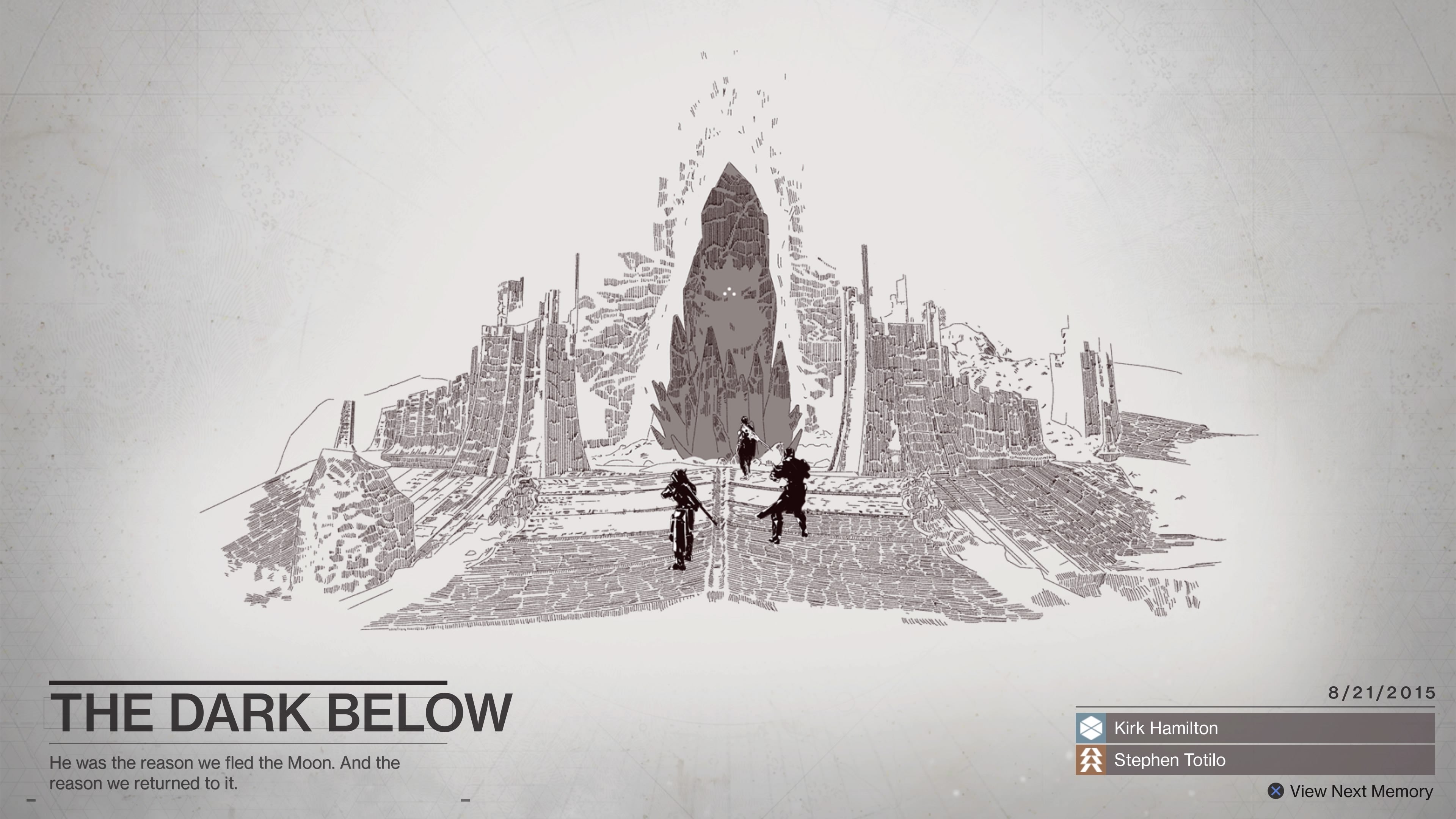 There was the time some current and former Kotaku colleagues (and some other guy) ventured through the Vault of Glass. I have a vague memory of Kirk getting persnickety. 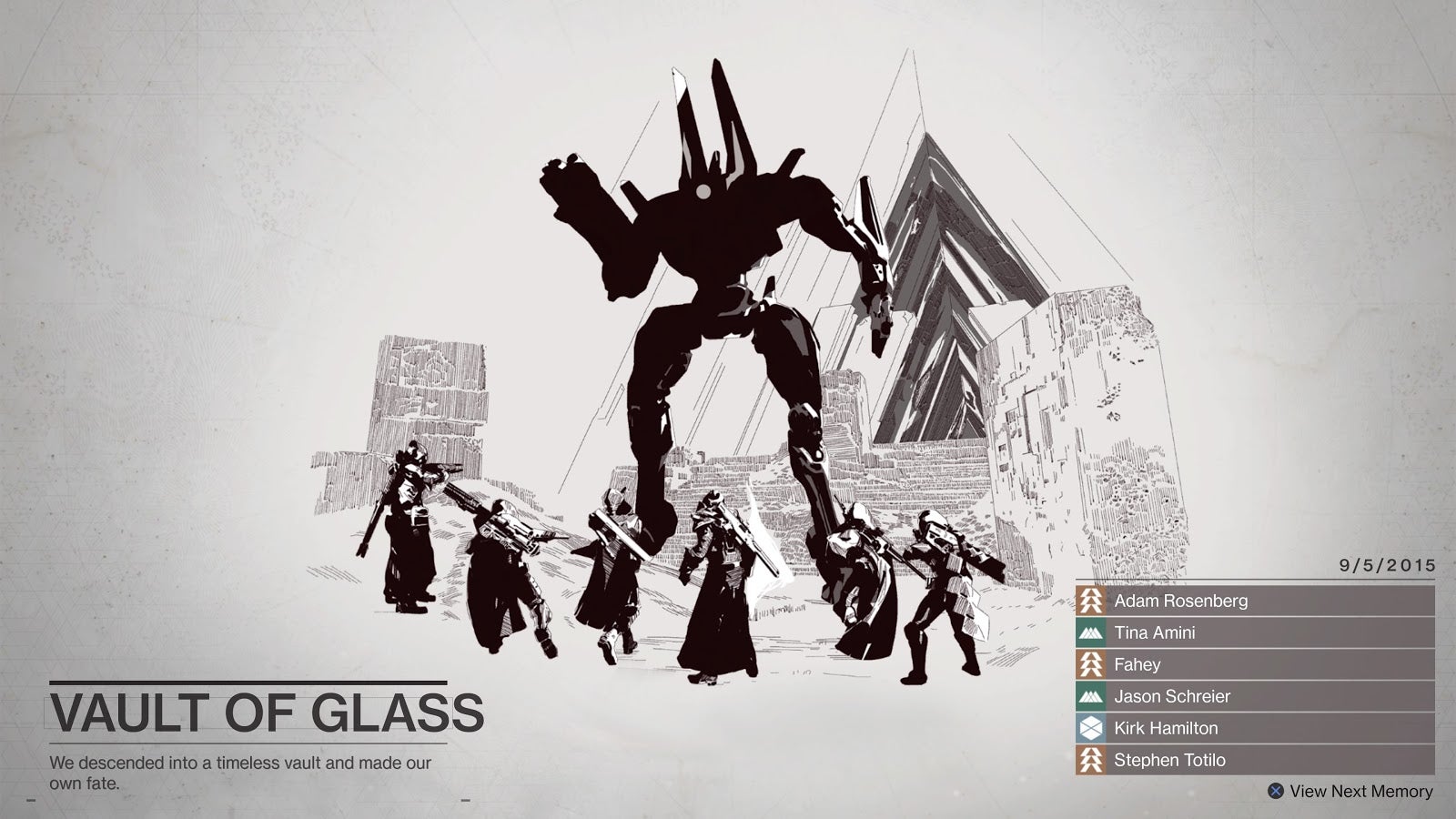 Then, there was the last major thing I did in the first game before largely putting it aside, though I did take it for one final spin in September 2017, by which time players had largely abandoned it. 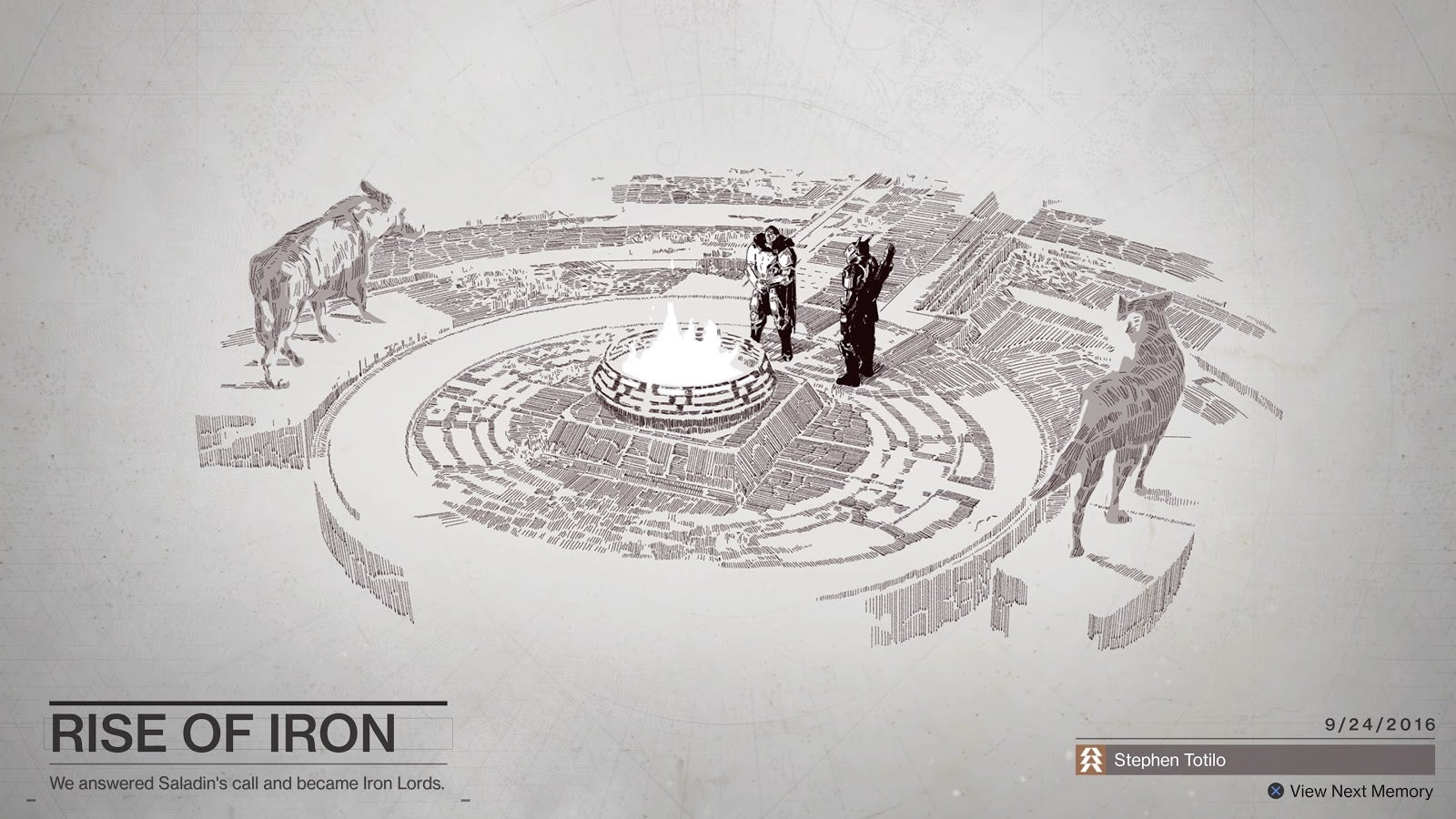 Mixed feelings - The characters: I’ve liked most of the old and new characters in Destiny 2. I’m shocked I even remember most of the old ones, but they stuck and it helps that they are reintroduced well. There’s Cayde! There’s the guy Lance Reddick plays! That robot who sweeps! There’s the lady who I could buy ships from! The new sniper guy with the accent!

I’m just not into the Speaker. He’s boring, and he’s the main reminder for me about how bland a lot of Destiny’s main lore is: travellers this, darkness that, and a masked guy I can hardly care about strung up by a new villain who looks like an obese version of the 1980s Transformer Jetfire. 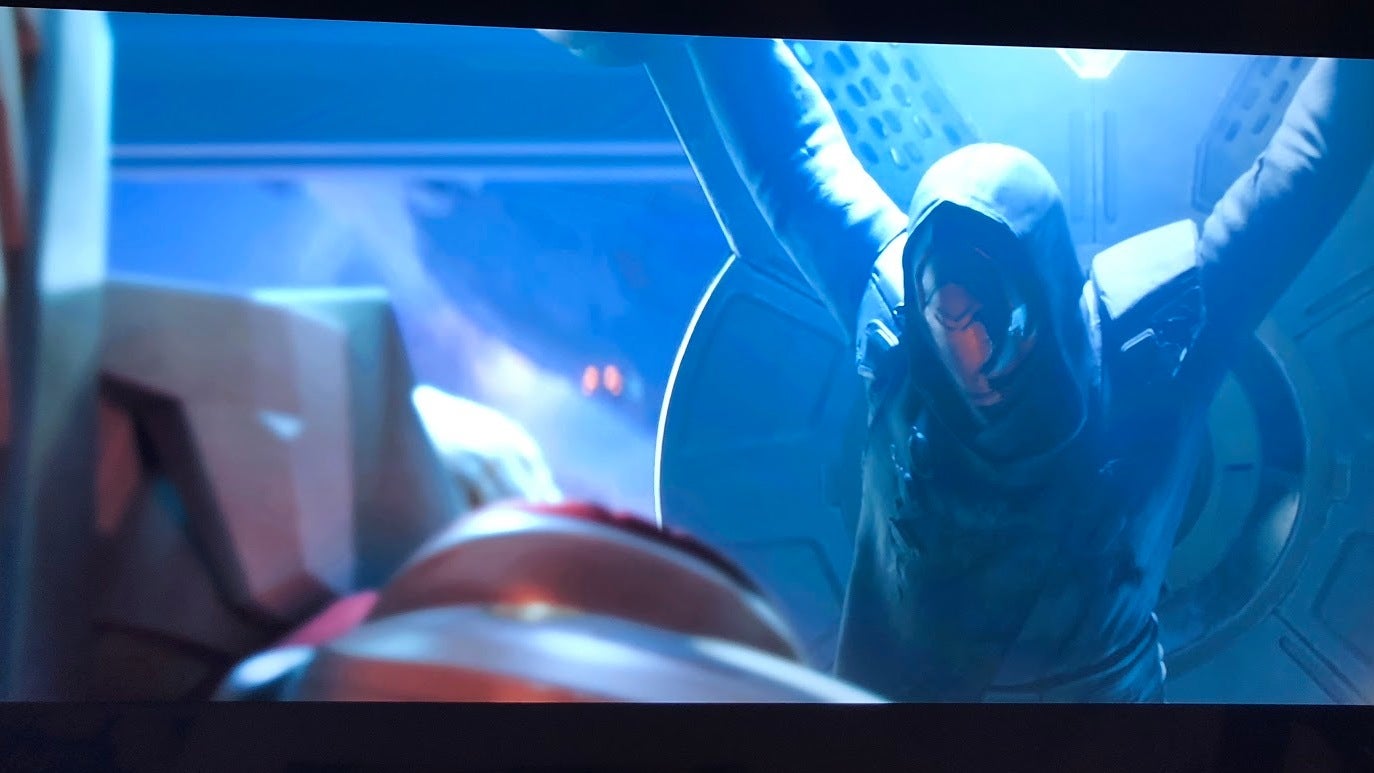 I quickly took a photo of this guy so I could upload it to our staff’s Destiny chatroom and voice my disdain.

Liked - The map and the new stuff in it: I’m a big fan of Destiny 2’s improved map and its abundance of clearly-marked treasure chests and Lost Sectors. Those Lost Sectors are little pockets of conflict that you won’t come upon without first finding their hidden entrances. Your map shows the general area where a hidden entrance may be. Search and you may notice, say,a basement stairway in a building you’d otherwise run past. Try going down it. Once you find a Lost Sector, you’ll get about five or 10 minutes’ worth of linear level design that leads to some loot. I’ve enjoyed these, so far.

Liked - Adventure missions: They’re smaller than story missions but bigger than Patrols. Adventure missions have sent me all over the first couple of planet maps I’ve unlocked in Destiny 2, giving me fun side quests that don’t feel integral to the main storyline but have helped the game world feel alive. I did one on Earth that had me trekking back through an area I’d cleared in a story mission, only this time the area was full of explosives and laser trip wires. I first had to figure out how to get around them, then activate a teleporter, then teleport the explosives to a mountainside where enemies would be dropping in from their flightcraft, then watch as the traps mostly killed the bad guys, leaving me just a little mop-up to do at the end. I hope the game has a lot more of this.

My character, at the moment. She’s got some levelling to do.

Mixed feelings - A sense of constriction: This isn’t really the game’s fault, as best I can tell. If you start Destiny 2 and do the main and side missions the game assigns to you, you don’t get to see much of the early Earth and Titan maps. You’re not yet getting the vibe I enjoyed in Destiny of vast, open battlefields with tonnes of things to do in them. I expect the game will open up more as I get through the main campaign. Kirk has assured me that that’s when Destiny 2 actually begins.

I do get a kick out of running into really high-level enemies, which I assume got added to the game as DLC and are far too tough for me now. They also limit where I can roam. On Saturday night as I veered a little off the beaten path on Titan, I ran into someone unkind called Hirak’s Familiar who was supposed be fought by players at power level 360. I’m at 107. Needless to say, he killed me in one shot. After that, I steered around him. I had a similar encounter with a wandering high-level enemy when I started the first Destiny and enjoyed the eventual revenge I got on him when I levelled up. I’ll be back for you, Hirak’s Familiar.

Disliked - The new Shader system: In the first game, I enjoyed obtaining colour-shaders that would allow me to match the gear with which I adorned my character. I experimented with lots of shaders in the first game, so I was excited to get some in Destiny 2. Then I found out on Saturday that shaders in Destiny 2 are items with limited use and have to be applied manually to each piece of gear your character wears. Hoping I got that wrong, I texted Kirk. I was, unfortunately, correct. My reply: “Wow. This is horrible...What a downgrade from the last game.” 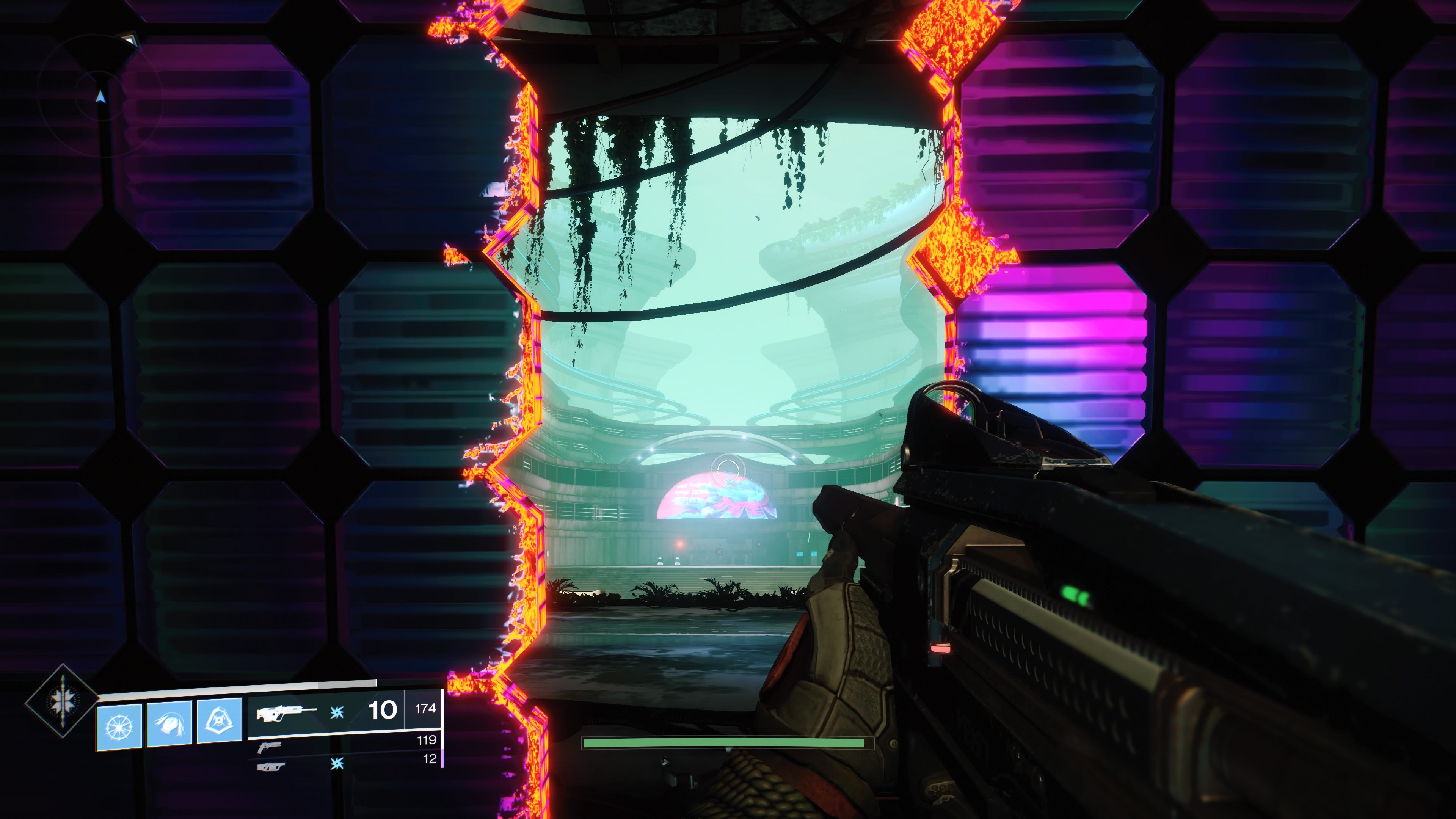 Liked - The Solarium: This area I just blasted my way through in Titan is one of the coolest areas I’ve seen in a Destiny game. It’s a huge arcology, sci-fi-mega-mall-looking thing. You get to it by shooting a hole in stained glass or something. 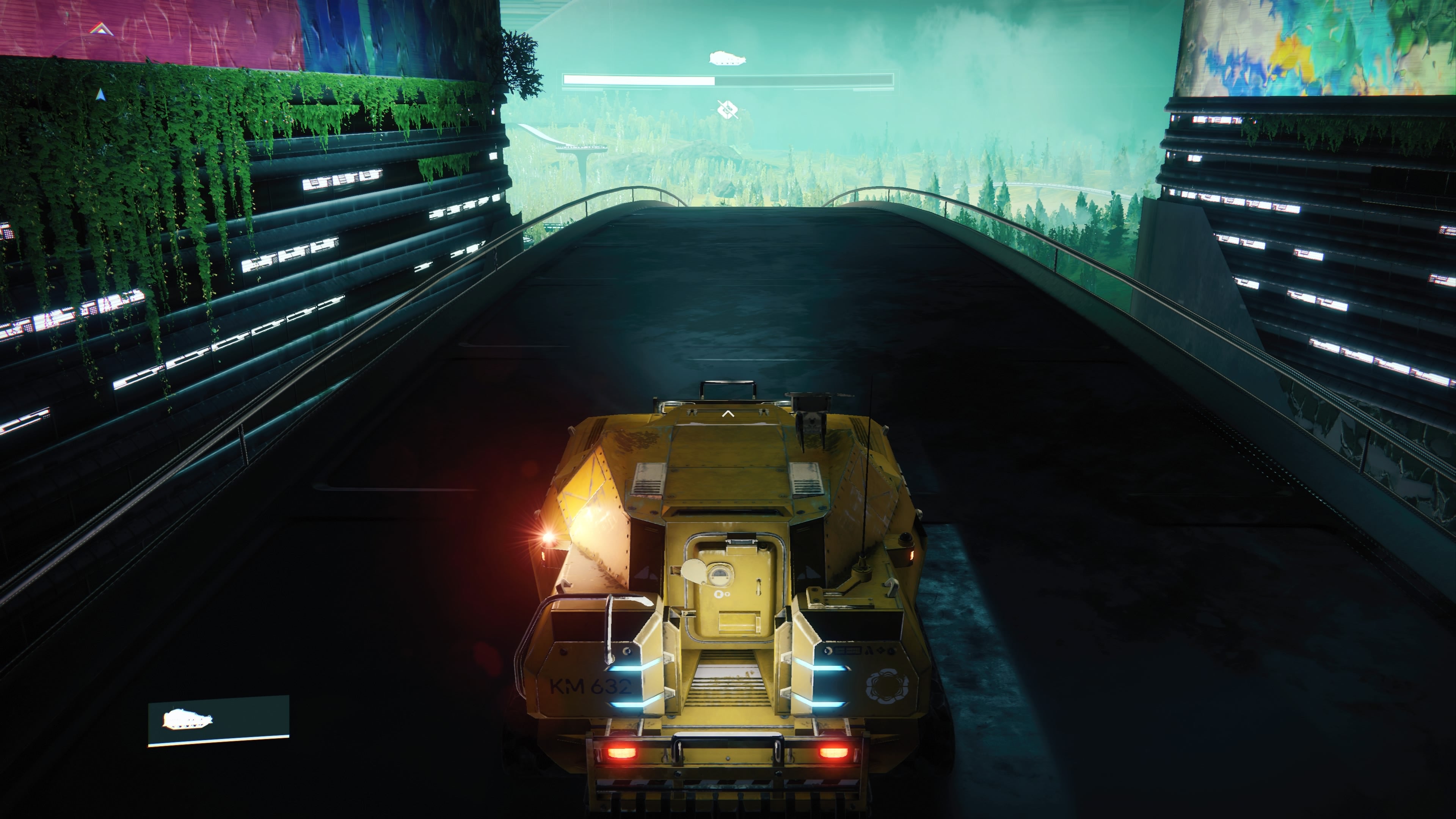 Disliked - Driving stuff: A truck-driving sequence briefly gave me final-level-of-Halo flashbacks. That’s a bad thing, by the way. Hoping there isn’t more of this.

Most Destiny 2 players are far, far past me. That’s fine. I had a great time playing as a latecomer to the first game and would joke to my colleagues that they beta-tested the game for me. I’m hoping for the same experience this time. So far, mostly so good.