By Lewis Packwood on at

Before we start chatting about Boundless, let’s acknowledge the enormous elephant in the room. That elephant is Minecraft, and this awkward pachyderm is so big it’s blocking out the sun. Even a cursory glance indicates that Boundless is a shameless Minecraft ripoff ['Homage' shurely - ed], right down to the hunger meter.

Like Minecraft, Boundless has spent a long period gestating in Early Access — four years, in fact. But the game finally breaks out of beta on 11th September when it officially launches on PC and PS4, with Square Enix handling PC publishing duties (weirdly the developers Wonderstruck will be self-publishing on PS4, seems odd that Square didn’t step in there too.) Wonderstruck is based in the development hotbed of Guildford in Surrey, home to Media Molecule, Criterion, Hello Games and numerous other classy outfits, and was formed in 2012 by a cabal of coders from (among others) Lionhead, EA and Sony. With so much talent behind it, not to mention Squeenix taking an interest, the expectations for Boundless are sky-high. The question is whether it's different enough to what already exists to stand on its own. 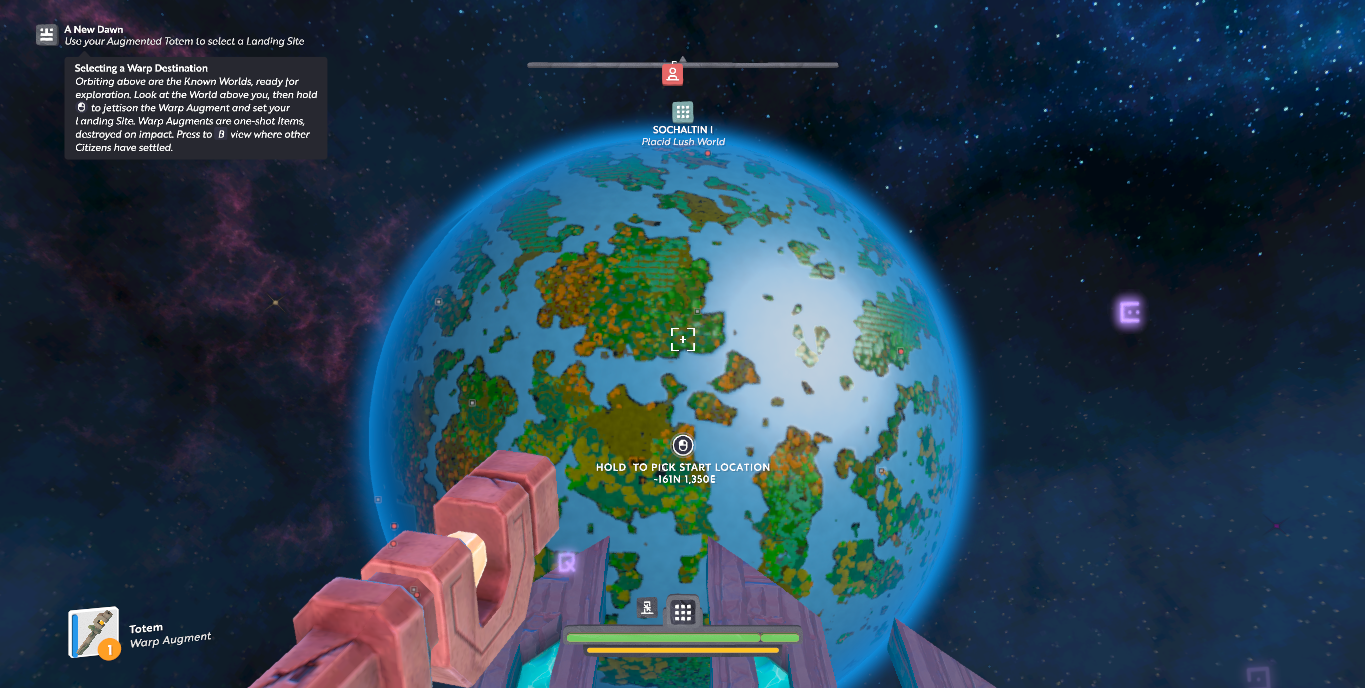 You can pick anywhere on a planet to set up your initial home.

The biggest difference between Minecraft and Boundless is the gaudy MMOG coat that the latter is swathed in. Boundless is Minecraft but in a persistent shared world, where players are encouraged to build cities together and craft resources to sell in shops that, naturally, players build themselves. And it’s not just one world, either — look up, and the heavens are dotted with other planets to be explored, from benign Level 1 worlds, with friendly creatures and pleasantly breathable atmospheres, right up to Level 5 worlds, which are host to hostile lifeforms and toxic hazards. The more extreme the planet, the rarer the materials that are found within it, providing players with incentives to explore harsh landscapes. So if you want to make a house out of pure titanium, you’d better craft yourself a very big stick first in order to see off the horrors that lurk on those resource-rich terror planets.

I was invited to try out Boundless ahead of its official launch, though my initial impressions were underwhelming. To begin with, the character creation tool seems incredibly limited. In any MMOG there’s a natural desire to make your character stand out, yet the options available essentially boil down to changing the colour of your little goblin character and giving it a different hairstyle. It’s bizarre that in a game where you can build entire cities, you can’t even give your avatar clothes. 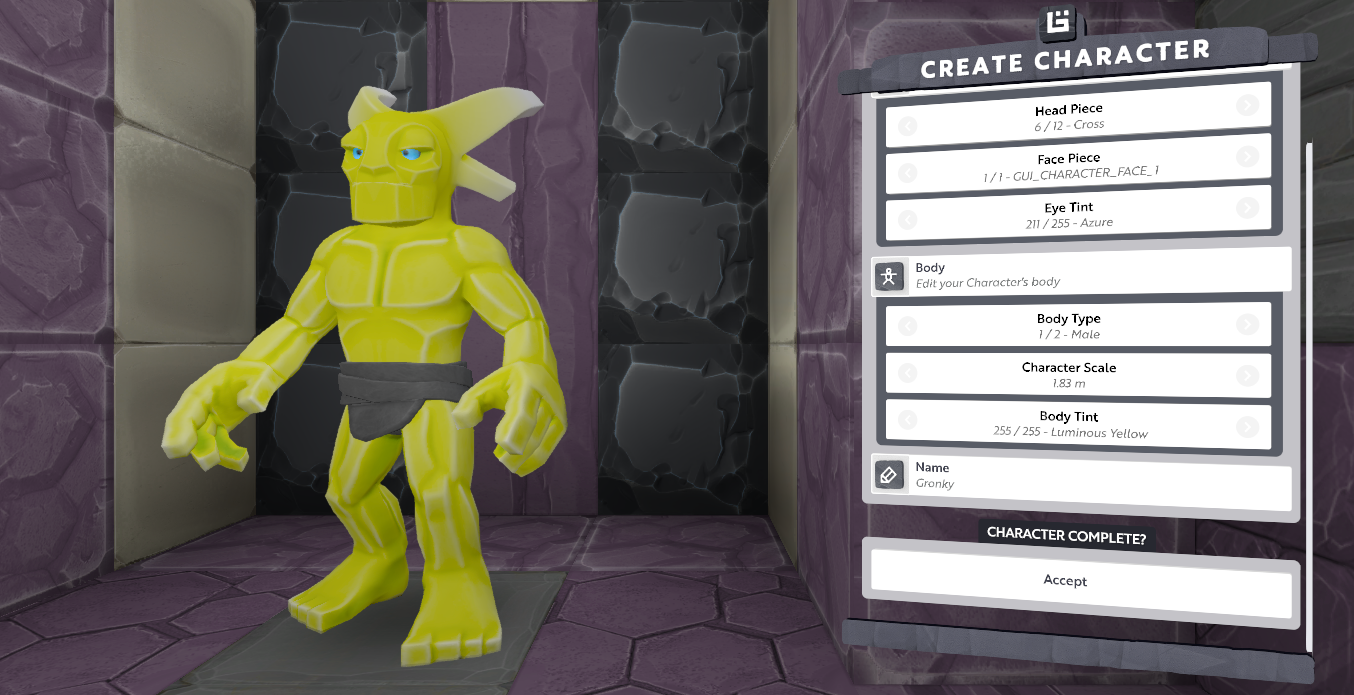 I hope you like nappies, because Boundless has a lot of them.

The lacklustre character creation leads to one of the most boring and charmless tutorials I’ve ever had the misfortune to experience. Needy text in the top corner commands the player collect X of that and craft Y of t’other, while dragging them through endless menu screens of skill points, crafting recipes and god knows what else. After an hour, all I had to show for my efforts was a crafting table and a campfire, alongside a steadily declining will to keep playing. I even found myself longing for Peter Dinklage to float in and bumble out a few lines of tutorial to spice things up a bit.

This opening seriously needs sorting out, because it's a confusing mess, no fun at all, and does more to make you dislike the game than explain it. It could easily be improved by simply giving players a few building blocks to play around with at the start — enough to build a small house, say, so at least they can achieve something fast. Chucking players into the wider crafting system immediately only means they think the game is about hacking down endless trees for little reward.

The disappointing fruits of my labour — plus a Beacon I built later.

Feeling dispirited, I abandoned my unfinished house and decided to do a bit of sightseeing instead — and that’s when Boundless suddenly got interesting. A Steam friend beamed into the game and, noting his position a couple of kilometres away, I set off to meet up with him. It was on the way that I saw my first other player. LIFE! I rushed over to greet them but, just as I got there, they were mauled by a wild animal and died. Perhaps there’s some sort of lesson there, but I have no idea what it is. 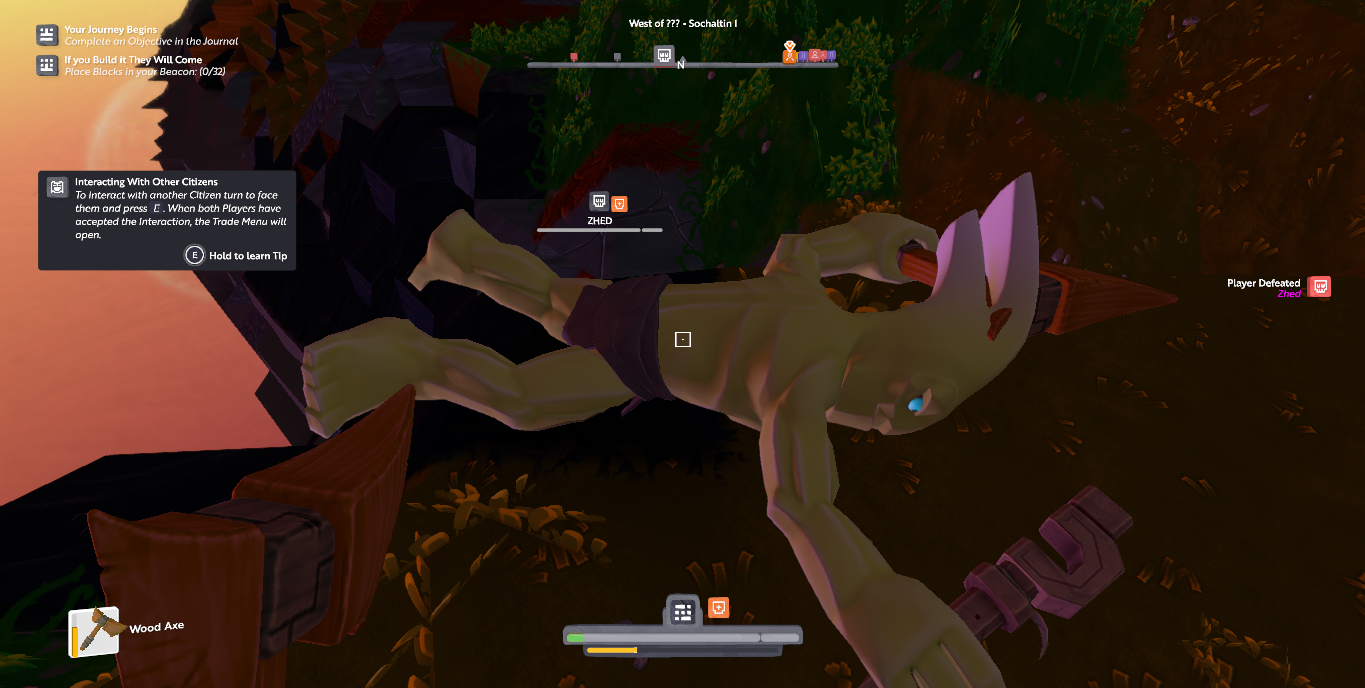 Just then my friend gave an excited shout: “Oh my god come and look at this!” I scampered over a ridge to his location, and I was taken aback to find a vast city. “How long did it take to build that?” I stammered out, ashamed of my own meagre hovel. The name of the metropolis flashed up on screen: The Sunken City, the mayor of which was apparently a chap by the name of HarryHotpants. We set off to explore.

Cities like this one are formed when players lay out plots of land near to one another, causing the game to recognise them as a settlement. Then the player with the most prestige — i.e. the best — becomes the mayor and can choose a name for the conurbation. We strolled through the streets of The Sunken City in the hope of glimpsing Mayor Hotpants, but it was eerily quiet — we guessed that the inhabitants might be US players and hence still at work as we pootled about in the early UK evening. Still, there was plenty to admire — enormous, strangely shaped towers and beautifully laid out buildings, my favourite of which was a Swiss Family Robinson-style treehouse.

Hey, the tower lights up at night!

Eventually we came across HarryHotpants in what looked like a James Bond-esque lair, complete with several underground levels and a 12-foot metal door that was presumably guarding Harry’s Most Precious Things. You can generally wander through anyone’s home in Boundless, but there’s an option to restrict access to certain areas, and other players can’t build, mine or take anything within the perimeter of your Beacon. Speaking of Beacons, these have to be refuelled every month or so — if you don’t log in to refuel, your land is no longer protected, so anyone could just come and grab your stuff.

Mayor Hotpants tinkers with his basement.

I complimented Mayor Hotpants on his impressive lair through text chat, which elicited a cheery ‘thx!!’, but he seemed keen to carry on tinkering with his enormous underground vault — pausing only to eye us suspiciously as we went near his Big Door. We spotted one other player running a shop a bit further down the street, but again he didn’t seem interested in chatting, scurrying off upstairs as we approached. I guess when you’ve got a city this big, there’s too much work to spend all day chinwagging.

It did make me wonder how social Boundless will be. That is, after all, kind of important in whether this works as an experience or not. Will everyone be too busy working on their own creations to interact with other players? These fears may be unfounded — I noticed The Sunken City had a billboard advertising its own Discord channel, so clearly there’s an effort to collaborate in creating the city. And the game also offers meteorite hunts which can be tackled in groups (take down the waves of enemies surrounding the meteorite and claim the rare loot within). 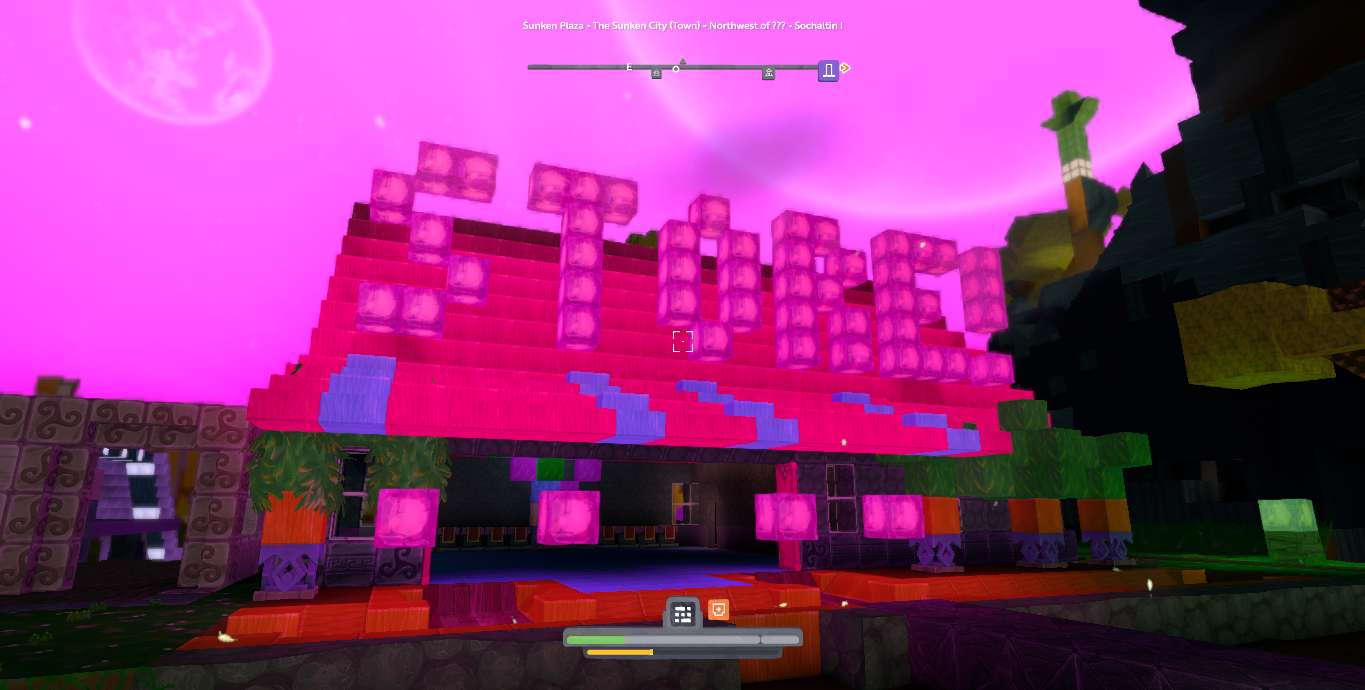 Boundless gets off to a terrible start, but eventually blossoms into what feels like an exciting take on Minecraft, albeit more of an iteration than a next step. There’s scope here to make some phenomenal constructions in collaboration with other players, and elsewhere on the internet you can find images of grand metropolises that dwarf the impressive Sunken City. But like any MMOG Boundless also demands an awful lot of your time, and exacerbates this with busywork like the need to log in and refuel your beacons every now and then. As might be expected there are microtransactions that can speed up the grind — the game’s currency can be bought in various sums, the most expensive of which costs over £80, and this can be spent on things like larger plots. None of this is necessary to play the game, but given this is also a pay-upfront experience that's the least you'd expect. 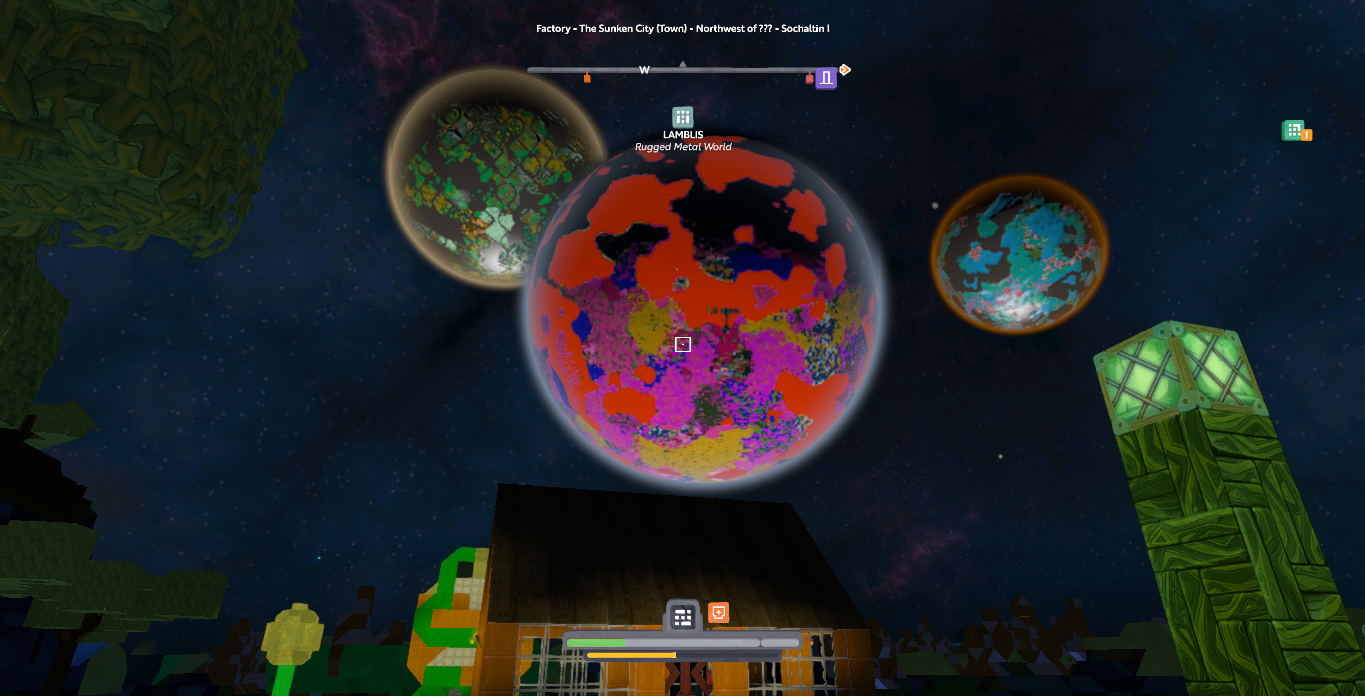 Look at all those worlds to explore...

Having looked at the magnificent blocky creations displayed on this page, you're likely thinking one of two things: “Wow I want to build something like that!” or “My god, how do people have the time to do all this?” If you’re in the former camp, Boundless will cost £32.99/$39.99/€39.99 and is out on PC and PS4 (with crossplay!) on 11th September. As a knackered parent and frazzled freelancer I’m very much in the latter camp — just looking at the magnificent Sunken City was enough for me, while the thought of what it would take to build something similar was exhausting. This may be an experience with endless potential, but that's only the case if your free time is boundless too. Now if you'll excuse me, I have to stop a toddler eating LEGO.

Lewis Packwood is a freelance writer and chief editor of A Most Agreeable Pastime.