Souls Games Are Great, Except For the Sexist Messages From Some Players

By Ario Elami on at

Since the release of FromSoftware’s Demon’s Souls in 2009, it and its spiritual successors—the Dark Souls trilogy and Bloodborne—have acquired reputations that are both built on the games themselves and players’ responses to them. Demon’s Souls and its descendants are as dependent upon their mechanics, level design, and art direction for effect as they are upon narrative obfuscation, and audiences have happily engaged this by spending years picking at details to assemble interpretive webs. These are lushly mysterious worlds that people, including me, want to emotionally invest in. And yet, time and again, that mysteriousness has been degraded by player messages being used for sexist ends.

When Demon’s Souls came out, it had several interesting ideas about how to utilise online interactivity. One of these was its messaging system. Any player could choose from a small bank of words and phrases to construct sentences, represented visually as a strip of glowing runes on the ground. The game was largely played solo, but messages made by one player could be seen by others, who had the option to rate a given message and give its author a health boost.

Messages could be used to mislead inexperienced players by, for example, placing a vague “If you jump down from here...” beside a lethal drop. Their main intent was to make the game easier by way of publicised tips. If upcoming terrain were dangerous, then you might see “Beware of the floor ahead.” “Sniper’s perch” might alert less experienced players to a good location for long-range attacks. Or a well-placed “If you use the lever, you can proceed” could draw your attention to a mechanism. 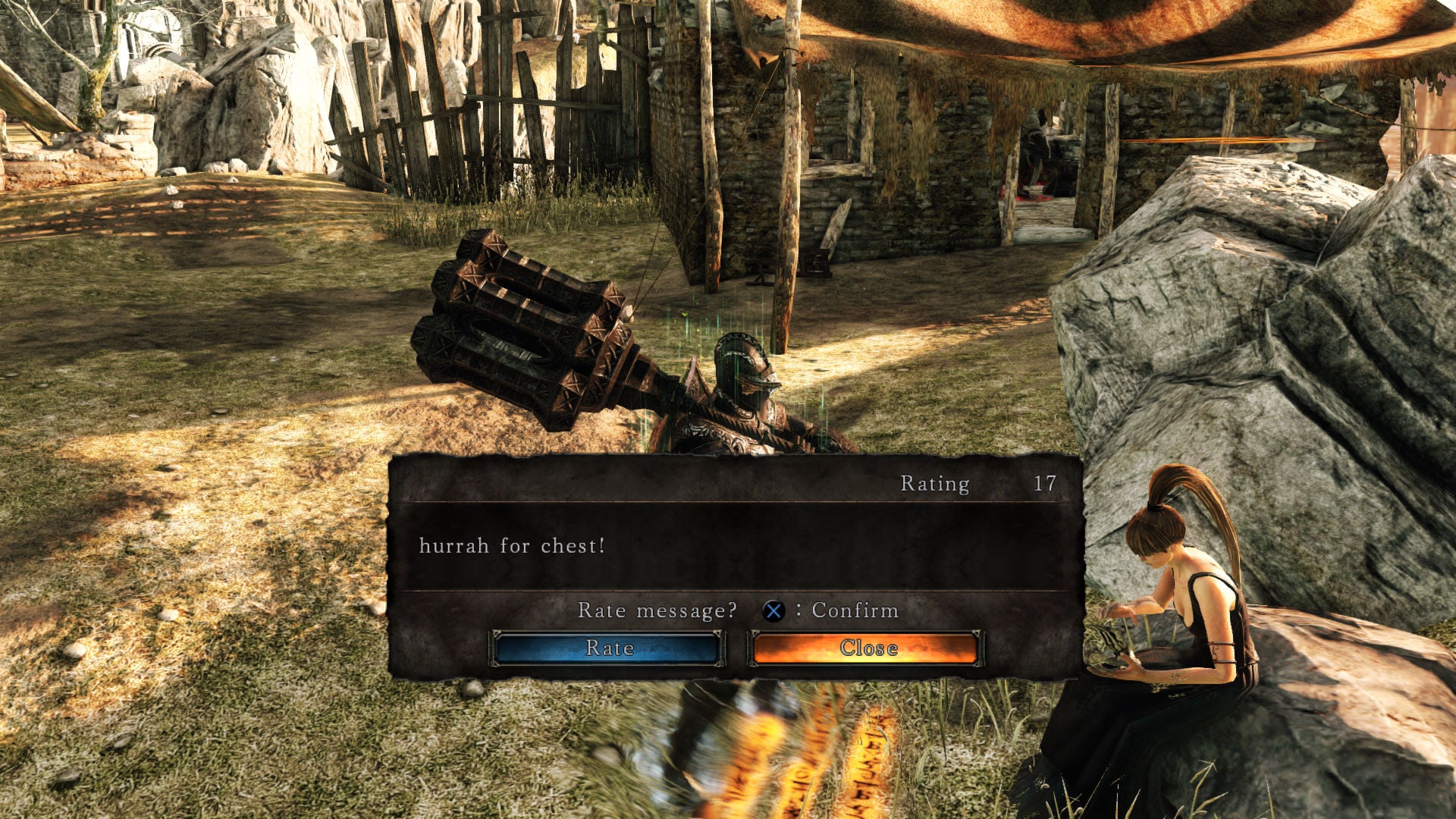 From Dark Souls 2: Message left next to Chloanne. 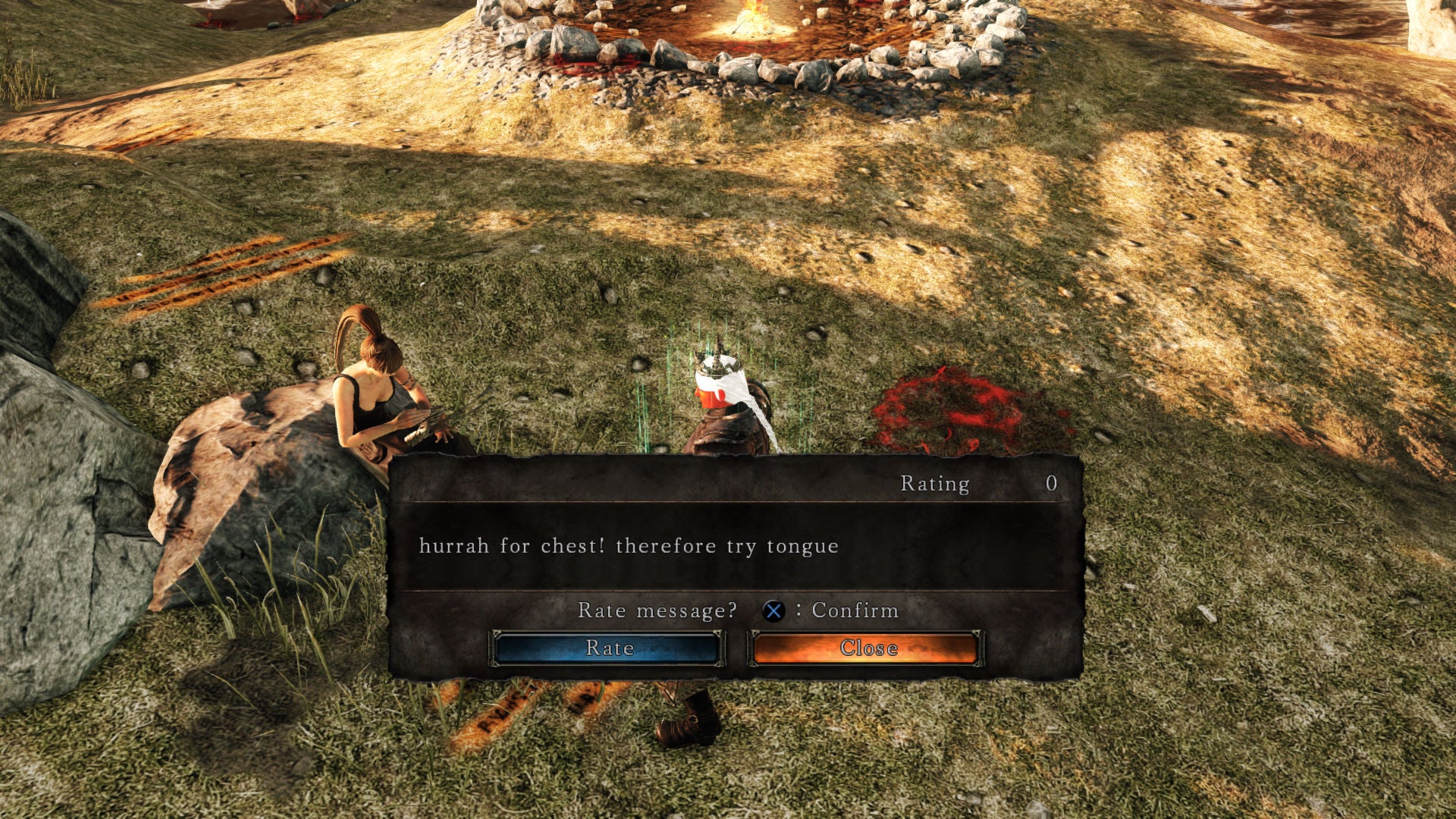 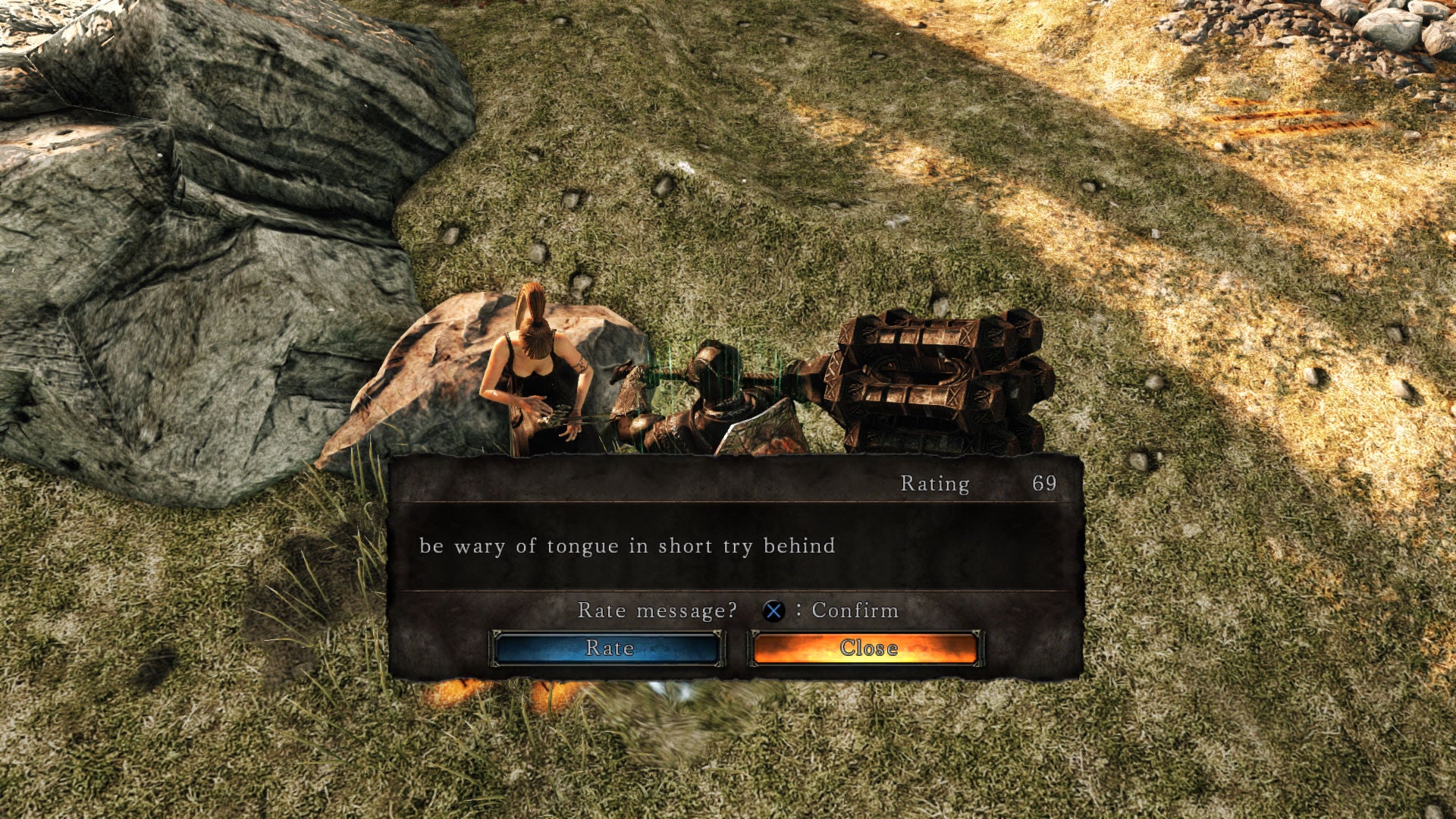 Humans being humans, a bit of crudeness crept in, aided by some of Demon’s Souls linguistic ambiguities, such as the unassuming noun of “Head.” Give people a blank wall and spray paint and someone will eventually draw genitalia. Crucial to this metaphor is the fact that such anatomical graffiti, at least in openly public spaces, is nearly always of a penis. In one sense, it is a juvenile joke; in another and more serious sense, it is a territorial, gendered assertion of power. Such has been the evolutionary trend of the grosser Soulsborne messages, with an important distinction: their targets.

As Demon’s Souls’ messaging system became a trope, utilised by the Dark Souls trilogy and Bloodborne, so too did its hub, which is always inhabited by a significant female character. For Demon’s Souls, it is the Nexus and Maiden in Black; for Dark Souls and Dark Souls 3, Firelink Shrine and Fire Keeper; for Dark Souls 2, Majula and Emerald Herald; and the Hunter’s Dream and Doll for Bloodborne. Each of these has come to bear the brunt of sexist messages, with other female characters sharing most of the rest.

Things weren’t too bad at the earliest stages. In Demon’s Souls, spots where the Maiden in Black might be standing or sitting were indeed complemented by messages, but the tone was more often romanticising—“You’ll find true love ahead”—than outright sexualising. From area to area, there appeared to be a general willingness to roleplay along with the game’s bleak atmosphere. Messages left near the Maiden Astraea, a saint who cared for the deformed and sickly—and who also served as a fairly harmless boss whom the player was nonetheless required to kill—tended to be things like “My heart’s breaking...” rather than anything crass. In fact, over the past near-decade, Demon’s Souls’ messages tended to be fine, maybe owing to unexplored differences in playerbases or the plainer designs for most of the women. The most sexually suggestive message devisable may have been “Sticky White Stuff,” a badly localised name for a magic-infusing item.

In one sense, it is a juvenile joke; in another and more serious sense, it is a territorial, gendered assertion of power. Such has been the evolutionary trend of the grosser Soulsborne messages, with an important distinction: their targets.

It got worse. Perhaps it didn’t help that the post-Demon’s Souls titles’ promotional material and press coverage emphasized the trial and error design. The subtitle for Dark Souls’ PC release was Prepare to Die Edition. A cover of Edge magazine read, “How the creators of Demon’s Souls are making the most hardcore game of 2011.” This was influenced by, but also fed into, the commentary of many players themselves until there was a perfect loop of word-of-mouth and branding. During Dark Souls 2’s development, co-director Tomohiro Shibuya talked about making the game more “accessible,” and this invoked an outrage only warily quelled when it was clarified that such accessibility involved quality of life adjustments.

All of this recalled videogames’ earlier advertorial and critical periods that stressed difficulty and presented the medium as an exclusive club, where entry was dependent upon performative abilities. Implicitly and explicitly, this was a boys’ club. Since this gatekeeping has come under threat as the medium’s reach has expanded, we’ve witnessed escalating hysterics by men to protect their space and consumerist identities. It’s not such a leap to hypothesise that this tough-as-nails branding of the Soulsborne games drew in a portion of the “git gud” contingent: anxious, angry, and arrogant men who derive entertainment from surrounding fictional women with ghostly perimeters of misogyny.

When Dark Souls 2 hit,any factors mitigating the presence of toxic gamers seemed to evaporate, creating an open season for female characters. They, and the Emerald Herald most of all, were so aggressively targeted by player messages— “weakness: hole therefore man required ahead”, “try plunging attack, rear…”, “try two-handing and then destroy”, etc.—that I have, to date, never loaded a file in Majula and not found a swamp of textual harassment. Its range extended all the way to the world’s near-deepest parts, where sheltered, mysterious women sang lonely songs.

The women in the hubs of the Souls games are, to varying degrees, depicted as subservient. The Maiden in Black is pigeon-toed, and she and Dark Souls 3’s Fire Keeper have a sort of binding over their eyes. Anastacia, Dark Souls’ Fire Keeper, has a mutilated tongue and cannot speak. If attacked, the Emerald Herald simply says, “If that is your wish,” and, like the others, will not resist attempts at her life. But it would be a mistake to cast blame upon the women themselves for inviting harassment, as if they, like shamed victims of rape, were “asking for it.” Rather, we should observe that this seems to be a perfect storm of subservient female characters, a portion of an audience eager to reinforce this subservience, and a mechanic which gives them the ability to do so (with a degree of crudity perhaps befitting the messages’ content). 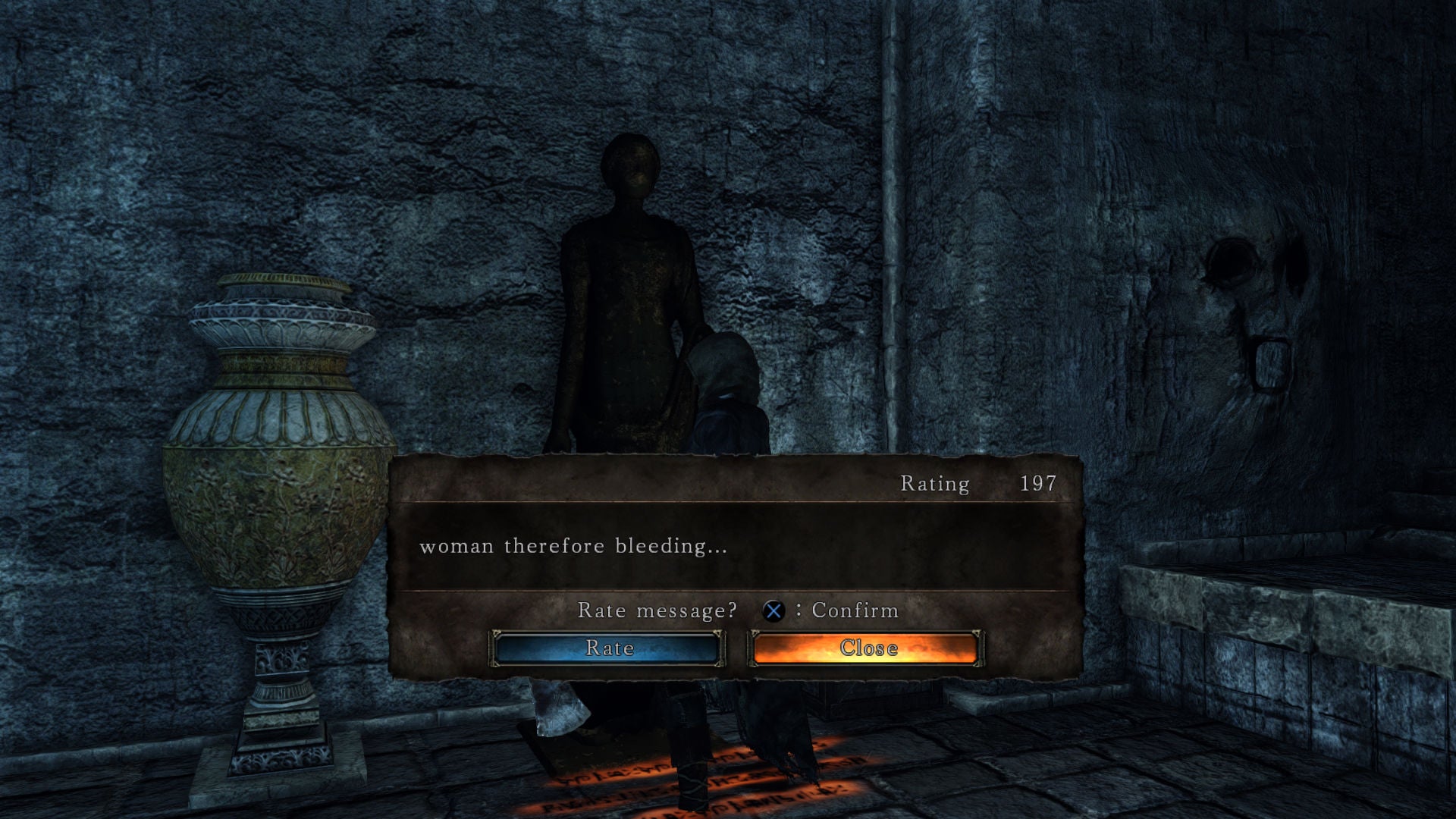 From Dark Souls 2: A message left next to a statue of a woman in a storage chamber.

By Dark Souls 2 and 3, it was clear that sexist messages didn’t even require women to be present. It could be enough just to have details which allow a stereotypical association to be made. A message in front of some bowls in a kitchen area of Dark Souls 3 might say, “Woman required ahead.” A generic female statue in Dark Souls 2 could have, “woman therefore bleeding…” written next to it, the implication being that even the representation of a woman is reducible to her menstrual period or torn hymen. Beneath paintings of the goddess Gwynevere in Dark Souls and Dark Souls 3 you’d often find, “Try holding [her breasts] with both hands.” Many players are also likely familiar with how Dark Souls’ deific character of Gwyndolin, who can be interpreted as a transwoman, often has nearby messages employing “trap” in the transphobic sense; i.e., if an ostensibly straight man finds himself attracted to someone who turns out to have a penis, he’s been maliciously deceived.

Anyone who has played these games will know that the majority of players’ messages don’t fit into the discussed paradigm...Yet the sexist messages’ exceptional nature arguably heightens their presence.

It’s hard to know what to do about any of this now besides point it out and call it what it is. A form of censorship was introduced with a list of censored words for character names in Dark Souls 2’s PC release, but the list was poorly compiled. For example: no one uses “bisexual” as an insult, the idea of censoring “lucifer” is bizarrely outdated, “beastiality” isn’t even spelled right, and the banning of “hole” conflicts with its inclusion in the messages’ word bank. Moreover, it only drew attention to slurs and expletives within otherwise decent words or names. For example, the common title of “knight” would show up as “k***ht” because it contains “nig”; or, if your title were “holy”, the censoring of “ho” would make it into “**ly.”

With Bloodborne and Dark Souls 3, players were finally able to downvote messages, and such messages would then be less likely to appear for other players. What motivated this option’s introduction, however, is unknown. If it was an indirect way of addressing sexist and asinine messages, it was naive, as these messages tend to be among the higher-rated ones around. Democracy, in this form, hasn’t had a positive effect. 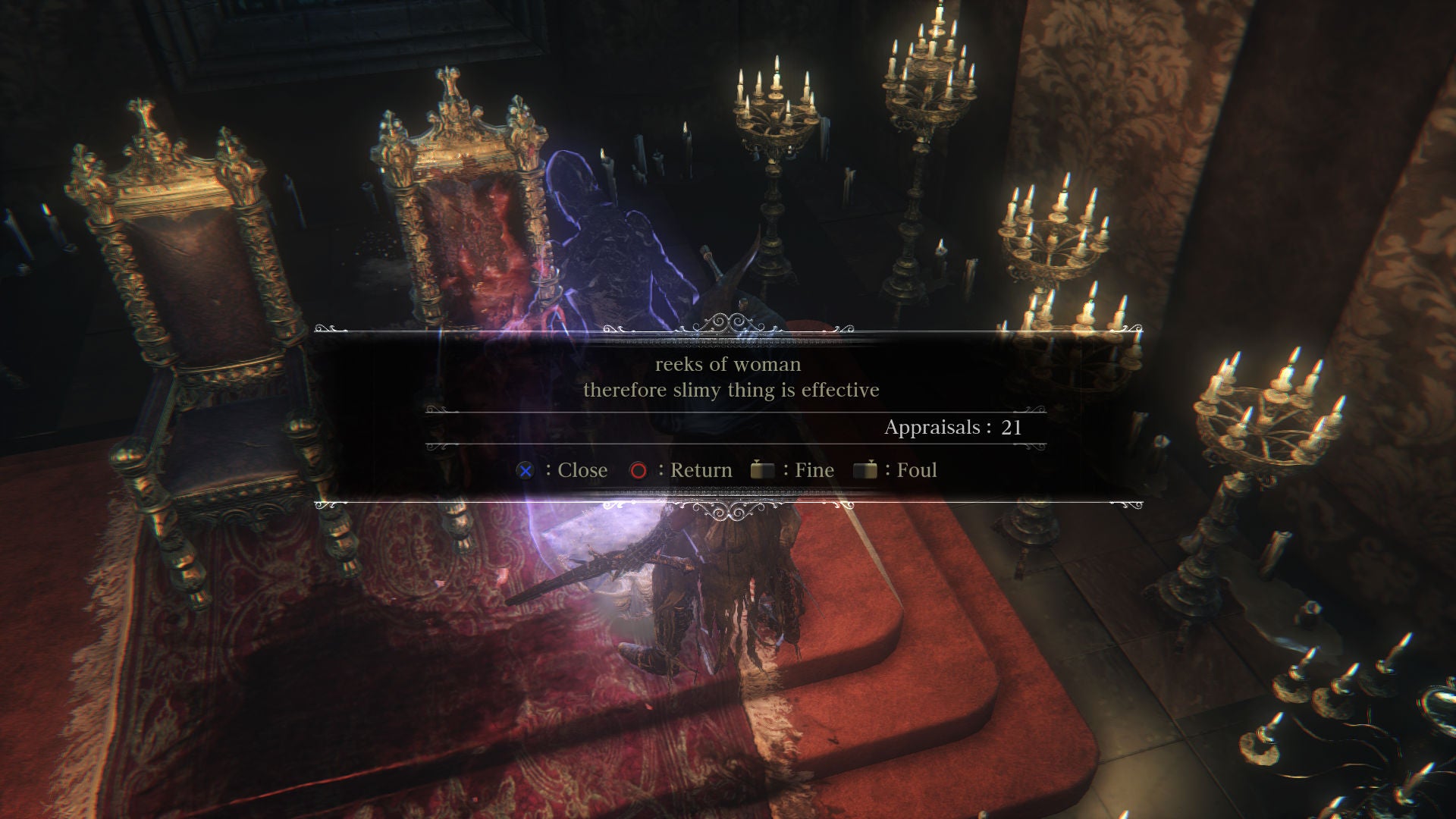 From Bloodborne: Message beside the throne of Analise, Queen of the Vilebloods (her remains seen here after her murder by Alfred).

Anyone who has played these games will know that the majority of players’ messages don’t fit into the discussed paradigm. They mostly preempt hurdles, proclaim victories, encourage curiosity, and craft humorous, mimetic mini-narratives. Yet the sexist messages’ exceptional nature arguably heightens their presence. Once you can guess what a bunch of messages around a woman are bound to be, it colours your perception of that space. Coming back to a hub after some spelunking is not just a return to relative security, but can be a reminder of the cultural toxicity bubbling beneath the games’ surfaces. YouTube user Jameserton’s video, “HAPPY SOULS”, has accrued nearly 17 million views since 2016, and, as good-natured as it is, even it contextualises the sight of the Emerald Herald encompassed by “Try thrusting” and “ambush behind.”

The general response has been to either tolerate or embrace these messages as a dependable cultural signifier, like a thing that just came with the territory. In one Reddit thread about celebrating player messages, a rare dissenter who clumsily says they’ve tired of the sleaze is called a “salty kid who needs to git gud” and is told to “lighten the fuck up.” In another thread elsewhere, a person who specifically voices their disgust for the sexist messages is replied to with, “You’ve always been able to play offline.” But just because you’ve averted your eyes doesn’t mean the thing has disappeared. Willful ignorance is not a solution.

Ultimately, it is unclear if FromSoftware is aware of the issue. Through a rep for the game publisher Bandai Namco, which published most of the Soulsbourne games, they declined to comment for this article. They did at least refrain from including the term “Sticky White Stuff” in the games since Demon’s Souls. The item’s equivalent didn’t reappear until Dark Souls 2 as “Aromatic Ooze,” and this term was absent from the word bank.

When Demon’s Souls’ servers shut down this year on 28 February and, later, the upcoming Sengoku-themed Sekiro: Shadows Die Twice was revealed to have no online component, both carried a sting for many people. It is disappointing for those who view FromSoftware’s modern output as inseparable from the multiplayer elements. For myself, though, I couldn’t help but feel a sense of relief.

Ario Elami is an artist, writer, composer, and architectural enthusiast who lives in Boston.