Hollow Knight And the Art of the Video Game Joke

More than a dozen hours into Hollow Knight, the 2D Metroidvania played a joke on me. It was a really good joke, and also kind of a mean one. Then again, most good video game jokes are a little mean.

A few hours into Hollow Knight, you meet a bug named Millibelle. She’s a banker. She’s got a little kiosk in a safe little corridor of Fog Canyon, offering banking services to adventurers. For a small initial fee, you can deposit your precious Geo with her and, should you die, you won’t risk losing it. 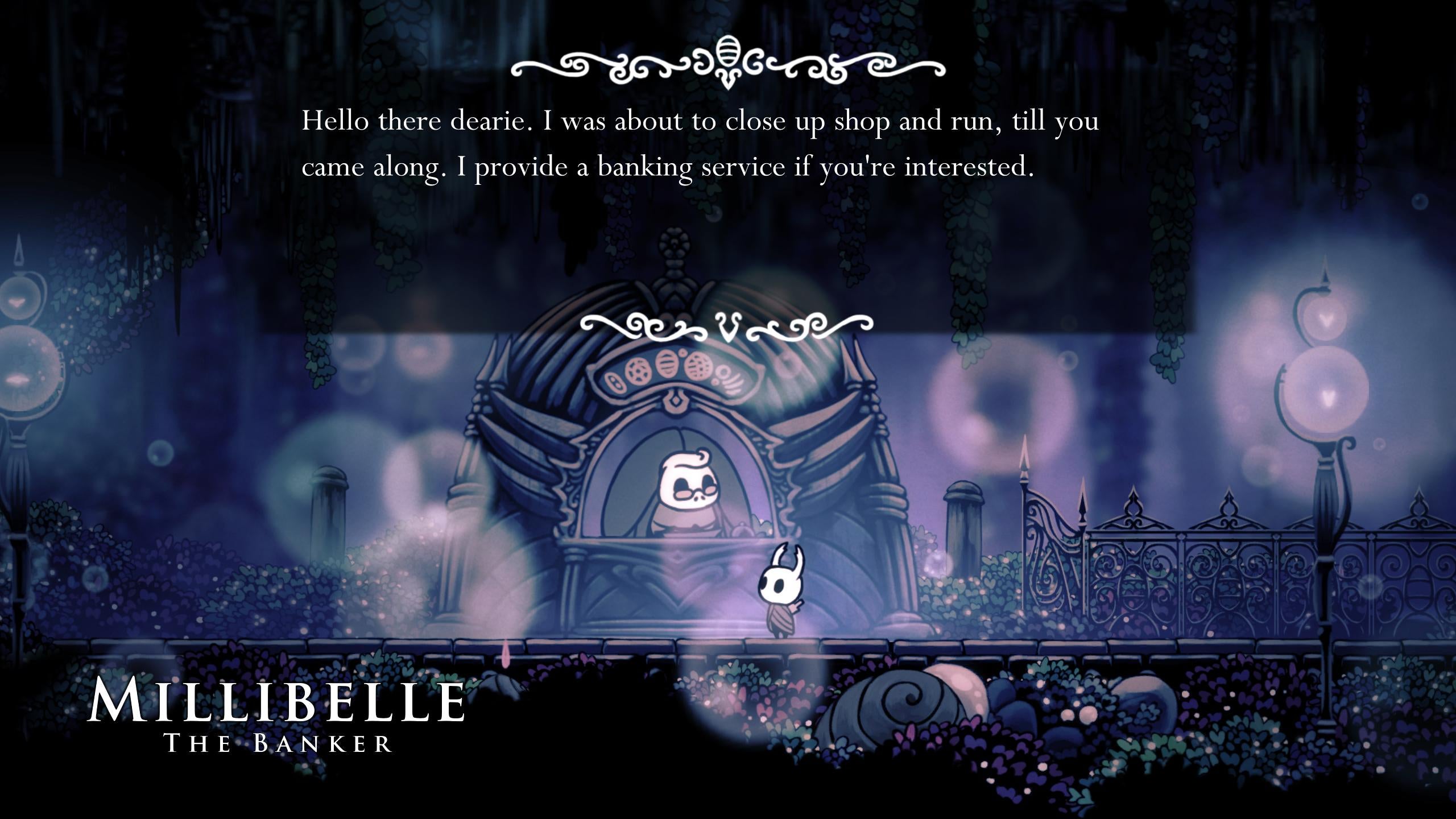 It’s very helpful in the early goings of the game, since you can keep your money safe while adventuring to get more money. That makes it a lot easier to save up to purchase the first several charms and charm notches.

Before too long, I had deposited several thousand Geo with Millibelle. I went out adventuring and returned to make another deposit and… hang on. Her bank was empty. She wasn’t there. 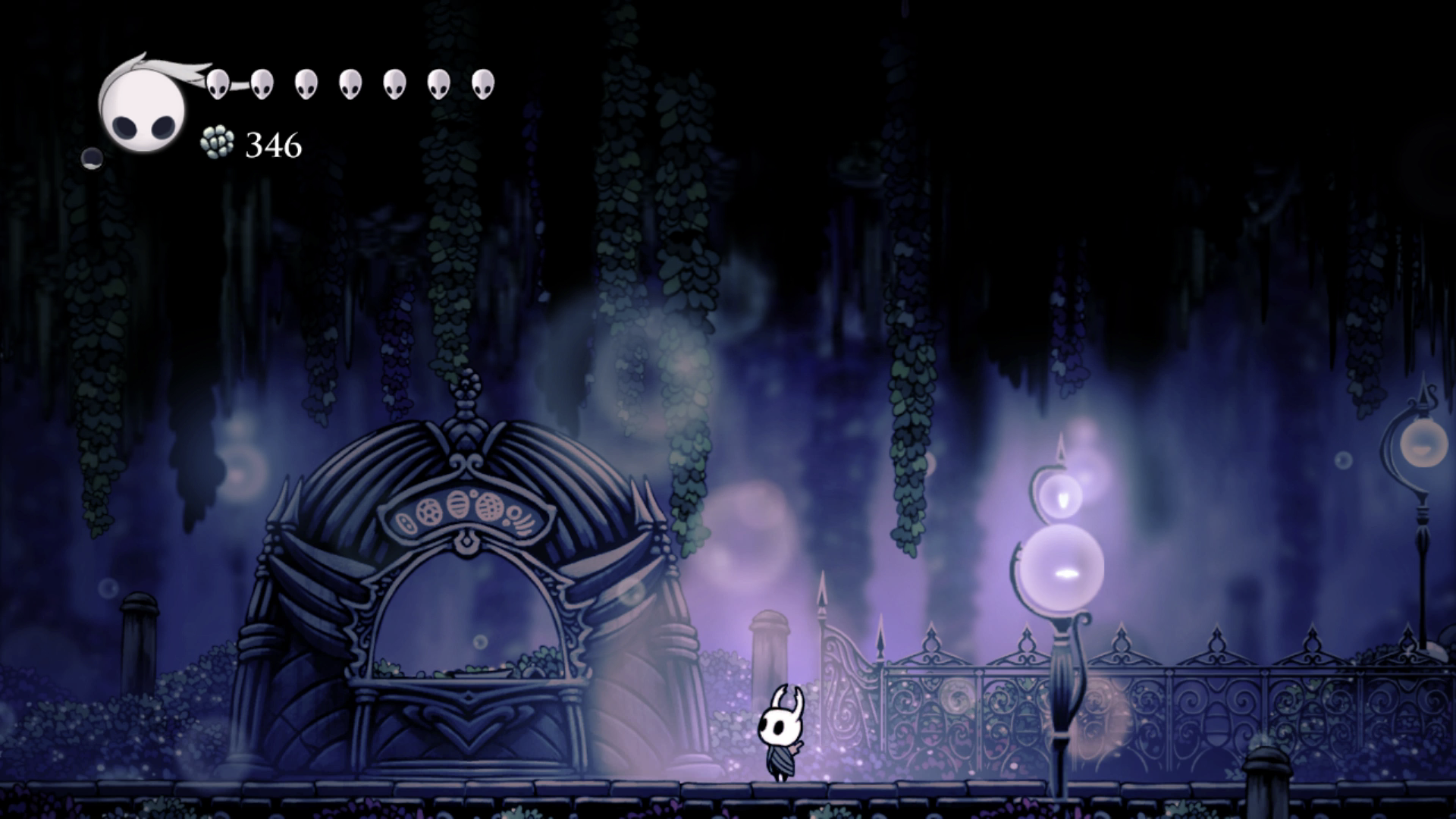 If I swung my sword at her kiosk, it… fell down! Because it wasn’t a building at all, it was just a cardboard cutout. Millibelle was gone, and so was my money.

When I realised what had happened, I laughed. I didn’t want to, but I had to admit that it was funny. Millibelle had seemed a little shady when I first met her, trailing off when describing her bank: “You’ll be glad to know your Geo’s safe within my shel... er, my vault.” Everyone knows only shifty people correct themselves like that. But I hadn’t expected the game would actually steal my hard-earned money.

If this happens to you, all isn’t lost. Keep playing and explore every possible area, and you’ll probably eventually find Millibelle. She’s retired from her life of crime and is relaxing in the hot springs atop a tower in the City of Tears. Her title caption has shifted from “Millibelle the Banker” to “Millibelle the Thief.” 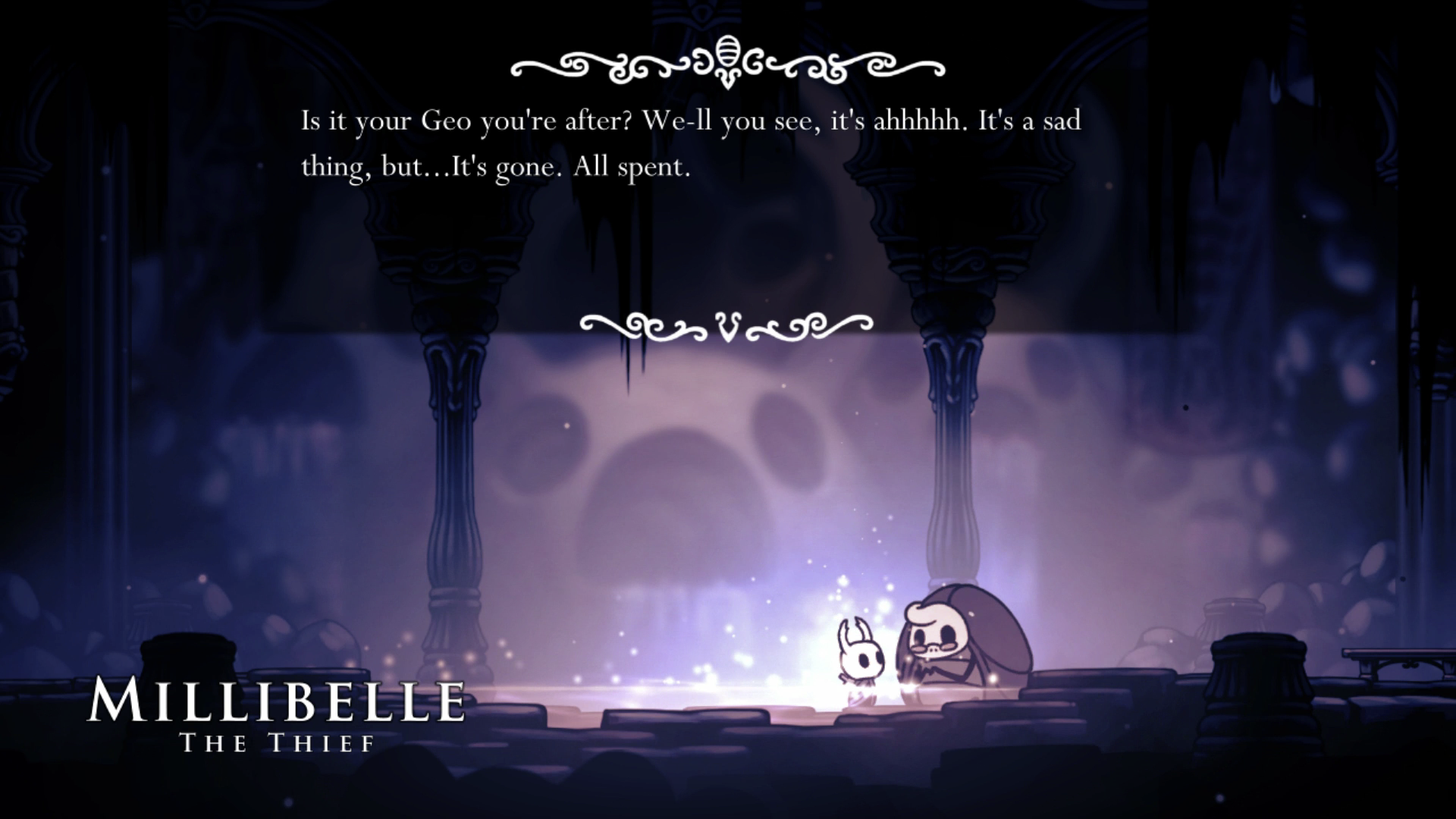 WHAT DID YOU EVEN SPEND IT ON, I ALREADY CLEANED OUT ALL THE STORES

Chagrined to be discovered, she stammeringly explains that she doesn’t have your money. It’s all gone. “Perfectly legitimate,” she says, “Just part of the whole banking deal.” Like everything else in Hollow Knight, your only non-speaking way of interacting with her is to attack. If you do…

Millibelle retracts into her shell and Geo begins to dump from it. You can bat her shell around the room as the coins pile up. Eventually, she drops all of the Geo she stole and then some, giving you a couple thousand extra as a bonus for tracking her down. She then pops back out of her shell returns to the bath, more or less unharmed, and you leave her to stew. 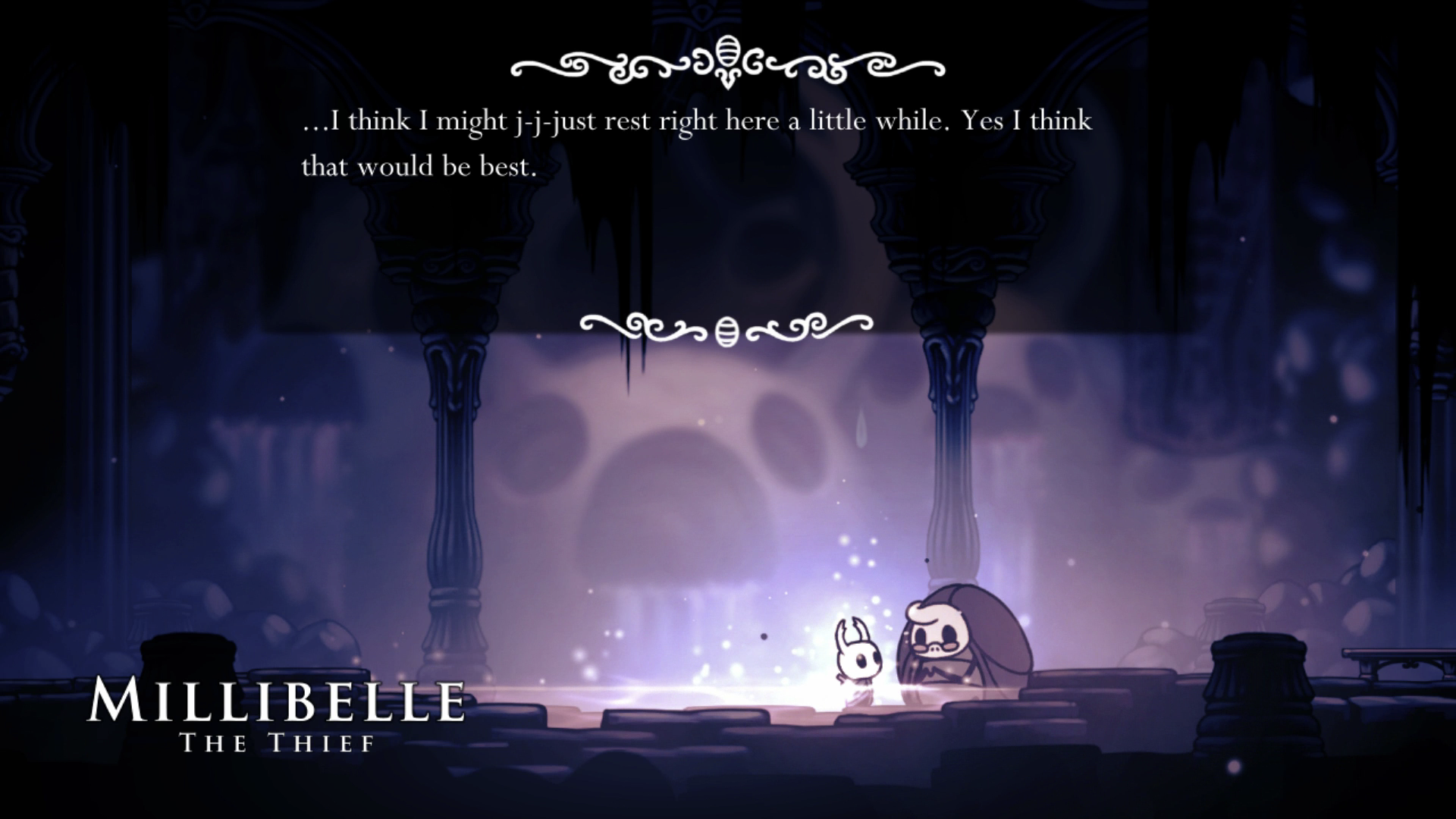 Video game jokes must involve the player in some way, which usually means making the player the butt of the joke. It’s a fine line to walk and an easy thing to screw up, particularly given that the makers of Hollow Knight decided to fuck with your precious Geo. It’s also dicey to have the final act of an interactive joke involve the player-character beating up an unarmed character until she drops money. The goofy slapstick of the bath scene, combined with the fact that Millibelle is a beetle and you can’t actually damage her, served to offset the premise enough that I didn’t mind, but I can understand why some might.

It’s difficult to break down a joke without ruining what makes it funny, but let me give this one a crack: the Millibelle joke is funny because the game is messing with your progress in a way you didn’t expect, and because it gives you juuust enough warning that something’s hinky about Millibelle that you’ll probably kick yourself for not being more cautious. It’s also funny because it resolves in an unexpected way, some time after you’d likely given up hope of ever finding her or getting your money back. On top of that, it’s neat that the bank does work for the first few hours of the game, giving you a safety net when you’re still getting your feet wet, then yanking it away once you’ve earned and deposited enough Geo to demonstrate that you can stand on your own.

Hollow Knight’s saga of Millibelle the Thief is just cruel enough to players to make a shocking impression, but ultimately forgiving enough that most people will look back on it and laugh. (Unless, of course, you never found her at the hot spring!) As a bonus, it’s a clever and creative way for the game to increase difficulty without just making the enemies tougher. Like pretty much everything in this terrific game, it was clearly crafted with great care.