I went into Chasm searching for something that would knock me on my arse. What I found was entertaining, but nothing more. Plenty of secrets, hidden dangers, and mysterious evils lurk deep within Chasm’s side-scrolling labyrinth, which is made lively and vibrant thanks to some truly amazing pixel art. Halfway through 2018 though, there’s almost nothing in Chasm I feel like I haven’t seen before.

I’ve been following Bit Kid Games’ metroidvania RPG for years, from its original Kickstarter campaign back when the studio was named something else to its many demos at gaming conference, a period of just over five years. Every time I saw a screenshot from Chasm or a few minutes of someone trudging through one of its dark corridors, I was desperate to know what lay just beyond the edges of the frame. It turns out the act of getting me to wonder was the game’s best and only unexpected trick.

Chasm is a 2D action platformer in which you explore a sprawling concourse of interwoven tunnels, caves, and ancient ruins buried within a mine. Above ground is a small town whose inhabitants have been kidnapped by the monsters below. As you venture down into the deep to rescue them you level up, collect new weapons ranging from swords and spears to whips and maces, discover artefacts that let you traverse the environment in different ways so you can get to new areas, and encounter a series of challenging boss fights that rely on memorising attack patterns and having good reflexes. 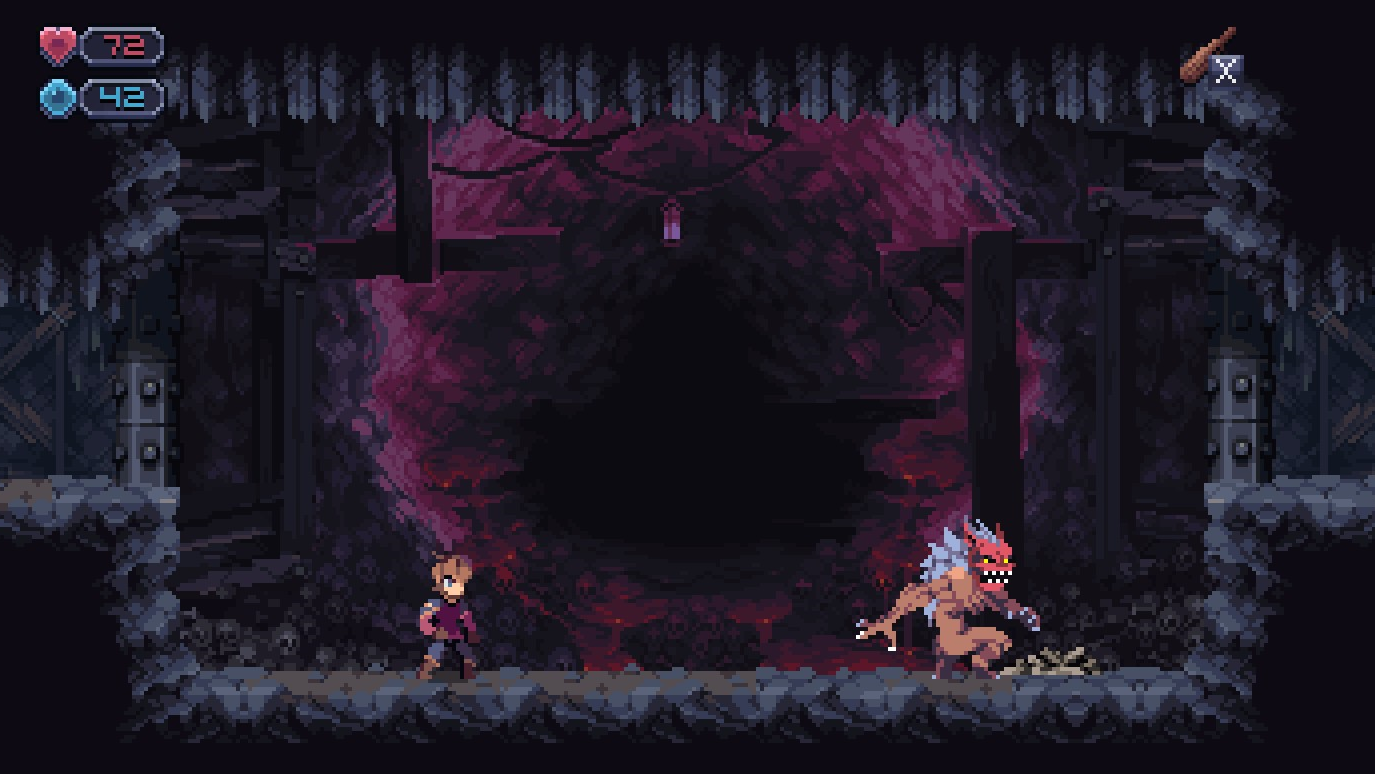 If this all sounds familiar, that’s because it is. New Metroidvania games seem to come out every other week. Many are quite good, like Dandara; some are quite unique, like Yoku’s Island Express; and a few are masterpieces, like Hollow Knight. This makes for a crowded field, and as with any crowd, those who arrive late are punished the most. It’s hard not to think Chasm might have felt more refreshing or exhilarating if it had arrived a few years ago as originally planned, back when high-end retro homages were more difficult to find.

“It’s hard to design something that feels undesigned, but Chasm’s procedural generation succeeds.”

For the most part all of the things that make Chasm fun and interesting to play are borrowed from Konami’s Castlevania: Symphony of the Night, comparisons to which have been made dating back to the Kickstarter campaign pitch. In both games the character you control can wield different weapons with different attack animations depending on what’s best for dealing with a certain threat. The wide-eyed cadet in Chasm has a backwards dash for evading attacks just like Symphony’s Alucard. Abilities gained by both characters over the course of both games allow them to reach new locations. They both have access to an arsenal of spells, which can be upgraded and eventually made to feel overpowered. Lamps hang throughout every part of Chasm’s map, each of which can be broken with a satisfying crack. Often they drop little orbs to refill your magic meter, and sometimes even little pouches of money that can be spent on teleportation scrolls, health potions, and a vast arsenal of other equipment and items. In Chasm there’s even a item you can equip that summons a small bird to fight alongside you, just like Symphony’s bat familiar. It all works very well—the weapon variety, the weight and precision of each methodical movement—it’s an exemplary recreation of a genre-defining classic, but one that struggles to move anywhere beyond the shadow cast by its over two decade old muse.

Unfortunately, the thing that most sets Chasm apart is also one of its most flawed features. The game uses procedural generation for much of its map’s connective tissue. When you start the game you’re given the seed designation for the particular world that’s created in case you want to share it with friends. While crucial screens like the locations of important items, boss fights, and small story beats (to the degree that they exist in Chasm) are all designed and pre-arranged, the levels connecting them, down to the number of enemies and how they’re laid out, are the result of algorithms.

I was originally afraid that this would make large sections of the game feel chaotic and indistinct, but that wasn’t the case. Rather than feel there was someone on the other side of the game trying to tell me where to go, it felt up to me to make my own decisions about which paths to take as I tried to reach new destinations without dying along the way and getting sent back to my last save point. It’s hard to design something that feels undesigned, but Chasm’s procedural generation succeeds. 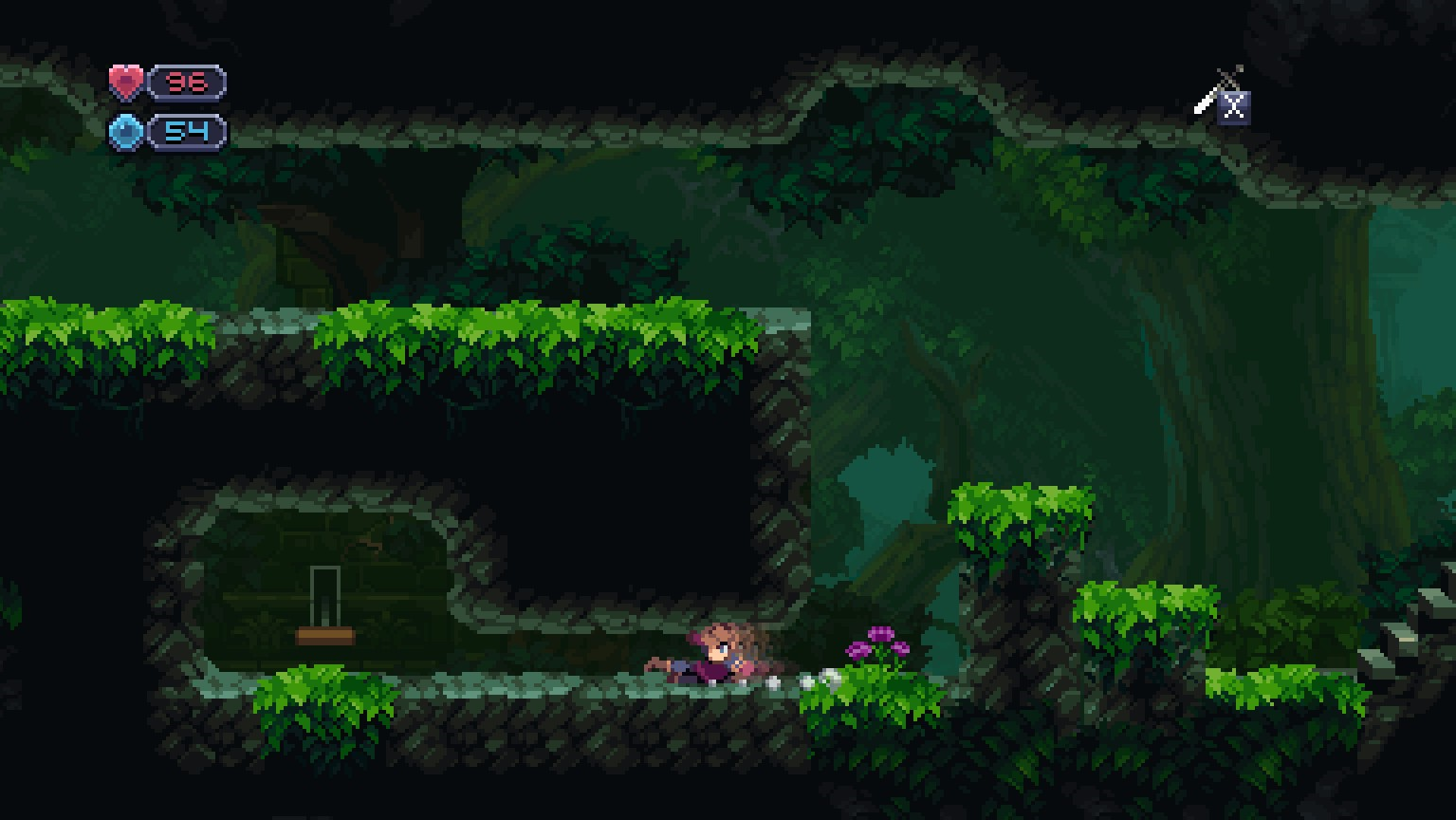 At the same time it feels underutilised. Procedural generation makes sense in roguelikes because players will be replaying the same thing over and over. Making the game different each time is imperative for keeping the experience from getting stagnant. In Chasm though, there’s no real reason to go back and play the game again after beating it. Speedrunners might have a field day trying to unravel the map’s particular complexities, but otherwise it feels like a waste. Bit Kids has designed for untold permutations of the game’s map, but there’s no reason after beating the game to load up another one of them and tease out its differences since the main beats will remain the same. In the end, Chasm’s most unique idea ends up feeling more like an encumbrance.

“This doesn’t make Chasm bad, it just makes it derivative.”

In the beginning of the game I thought the starting area was just a tutorial to let me get a feel for the game before progressing to other areas with bigger problems to solve. Retrieving a few people from a mine shaft—how hard could that be? An hour in I realised how wrong I was. The mine shaft ran several levels deep and eventually gave way to other areas—a series of undead-infested catacombs, an underground jungle—all of which connect to one another at various points through shortcut passageways to make backtracking easier. The sense of always being able to go deeper, where the enemies take more damage and kill you faster and the platforming puzzles get less forgiving, is thrilling. The wall grappling, double-jumps, and ground slides are each responsive and make exploration feel dynamic, but not so quick to execute that I ever felt like an invincible acrobat. 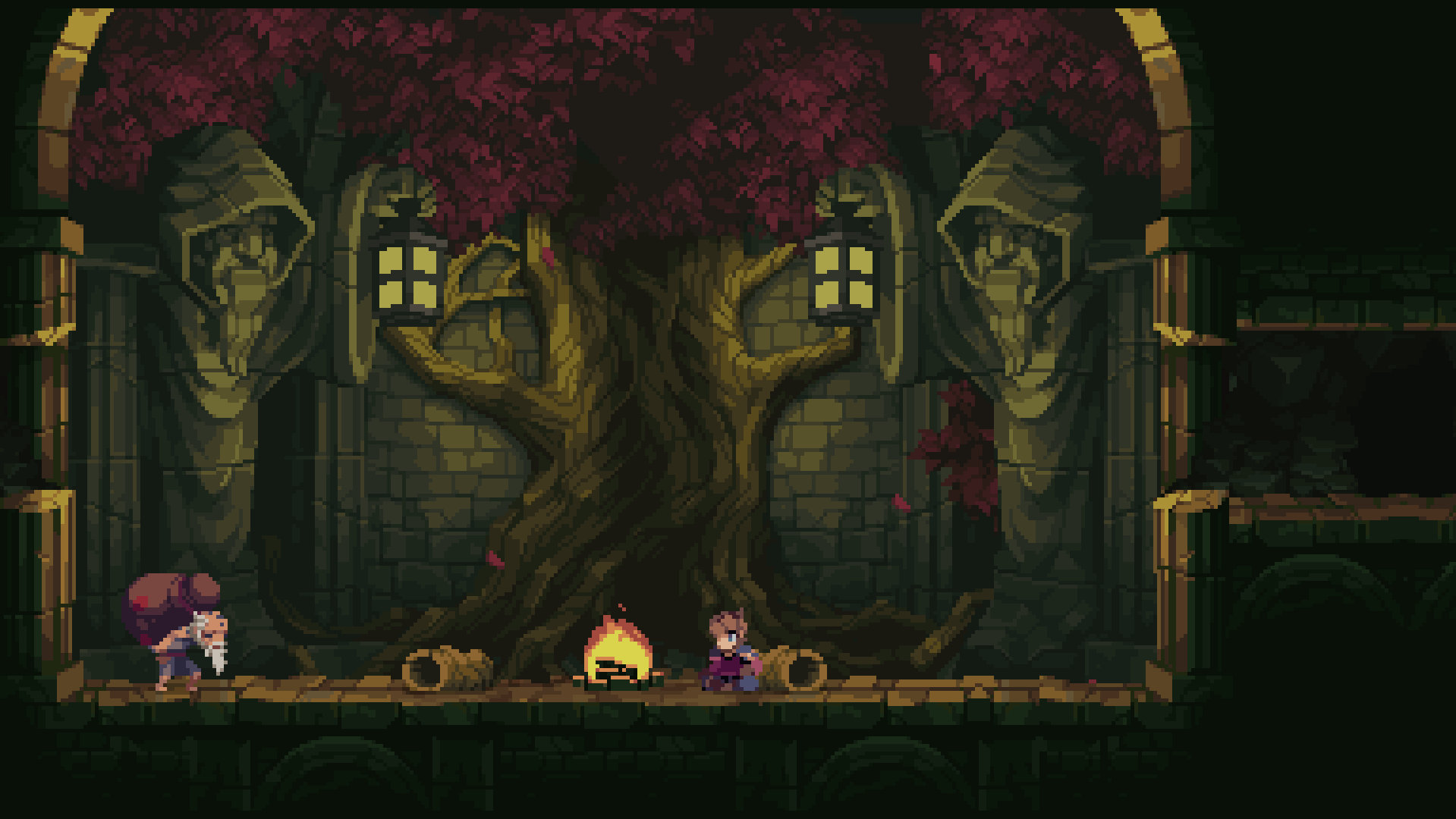 That sense of mystery and foreboding soon faded though, giving way instead to an incredibly soothing and enjoyable sense of methodically overturning every stone and looking through every corner of the game’s subterranean network. The game has no other tricks up its sleeve, and though I love its bespoke animations and detailed backgrounds, it never feels like there’s anything below Chasm’s extremely refined surface.

This doesn’t make Chasm bad, it just makes it derivative. Imitations have their uses. Instant coffee is great in a pinch. Vinyl floors made up to look like hardwood last longer than their real counterparts. I’m happy there’s another Metroidvania game for me to dig into, especially one that feels as taut and classically inspired as Chasm. It’s just that after such a long wait those things no longer feel like enough.