This Twitch Streamer Gets Revenge on Tech Support Scammers

“How should I get you the money, like, write a cheque?” said the Twitch streamer Kitboga, affecting the frail vocal fry of an 81-year-old woman named Edna.

On the other end of the phone line, a man with a South Asian accent told “Edna” that she would have to pay $200 (£151) for the man to perform the service of detoxing her computer. “Do you have a store near you, like Walmart?” the man asked. Yes, said “Edna.” The man urged the pseudo-octogenarian to drive to Walmart, purchase an iTunes card for $200, and transfer it to him. He thought he was getting away with a scam, but on screen, Kitboga smiled. Under the guise of grandma Edna, he’d kept the scammer on the phone for an hour and fifteen minutes—during which time he was unable to scam any real grandmas. Kitboga was winning.

The Twitch streamer’s voice suddenly returned to normal. “You locked me out of the computer,” Kitboga said sternly. “Man, that’s really scummy. It’s ridiculous what you’re doing. Going through a script to take advantage of innocent old ladies who don’t know about things, locking them out of their computer.”

In response, the scammer also broke character. “You people are fools,” he said. In 2017, victims of “tech support fraud” scams in the United States alone were conned for over $15 million (£11 million). “We are not fixing anything. We are making you fools! We take $1,000. We’re getting a raise. You’re getting poor.”

“Justice porn” is how Kitboga describes his scam-baiting Twitch stream. His mission is to frustrate, troll, and sound the alarm for an industry that makes millions of dollars yearly from lying to people who aren’t tech-savvy. International workers will target individuals, then pose as employees at at Microsoft, Apple, or any other tech giant—or worse, government tax officers—in an effort to convince victims they need to spend their cash to make some bogus problem go away. Often, they’ll read off a script. Sometimes, they’ll ask victims to give them access to their computer, which they will then sabotage remotely. A huge number of these sham services include “preventative virus software” that actually, if anything, installs a virus.

Scammers’ victims are often vulnerable senior citizens. Earlier this year, a woman in the US state of Texas committed suicide, apparently after losing her life’s savings to scammers. Kitboga says his grandmother, who had dementia, fell victim to scammers, too, which is part of why he’s passionate about wasting their time.

During the course of a one- or two-hour call, the entirety of which he streams on Twitch, Kitboga strings scammers along with the promise of big money while slowly and mischievously adding beads of narrative drama. Finally, when the time is right, he makes his reveal. How will the charlatans react? 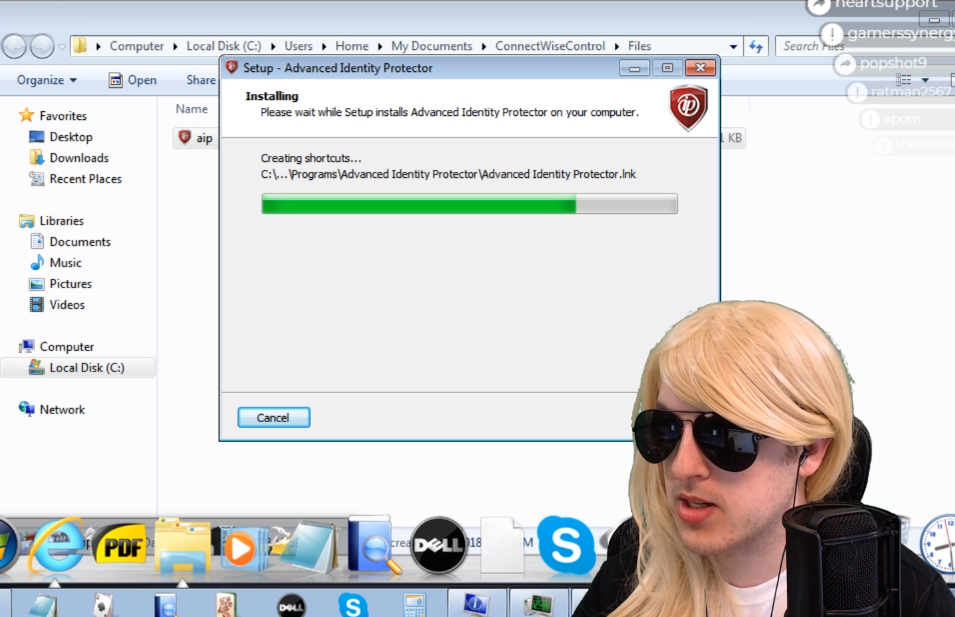 Before he calls scammers, Kitboga lets his viewers vote on that day’s persona. Besides Edna, there’s Nevaeh, Brochacho, Jebidiah, Viktor, Chad, and Dixie. Over the course of a call, Kitboga slowly reveals details about these characters, like an improv actor in a bit of performance art. Viktor, for example, is learning how to rap. In one call, using thick Russian accent, he challenged a scam company’s floor manager to a rap battle: “You’re not a technician/ you’re just fishin’ / for my info, bro. . . If I give you my computer you’ll lock me out / you type a Syskey, you think you’re gonna trick me / but you’re just a fake Microsoft technician / I’m not giving you any [of] my permission.”

Valley girl Nevaeh loves Shakira so much, she sings “Hips Don’t Lie” to the technician. Edna’s grandson has a folder of his girlfriend’s “nudes” on her computer which, when the technician clicks on it, reveals glamour shots of naked mole rats.

Against the background of his desktop, Kitboga is a brown-haired former software engineer who, with his huge aviators and an ever-present smirk on one side of his mouth, looks like he might have once pulled me over for doing 85 on the motorway. Behind him is a projection of an office or some other untraceable backdrop. He stays totally anonymous for fear of repercussions—not from the people he calls on the stream, but from the people running the scam operation, who could be vindictive career criminals.

“Everyone always asks, how old are you, where do you live, what’s your real name?” Kitboga said when we started our interview. “I’m not gonna tell you those things.” What he did divulge was his background in software engineering and digital marketing, which he quit to pursue scambaiting-as-entertainment full-time last year.

At first, Kitboga’s prank-calling hobby was something he’d just told a few friends about. He’d seen a YouTube video or two about these fake IT scammers’ tactics—reading off a script, opening a notepad, writing down some fantasy virus code. Then, he set up what’s called a “virtual computer,” so if he invited a scammer to take over his computer and “fix a problem,” nothing valuable would be damaged. As Kitboga learned more about the industry, he learned how to better troll it. Now, an average of 5,500 concurrent viewers will tune into his Twitch channel to watch the slow-motion car crash.

“A lot of people can relate to this,” he said. “Either they know someone who has been affected by this or they know someone who would be.” That’s why Kitboga can attract a broader audience than most Twitch content, he said. “There are certain Twitch streams—let’s pick on Fortnite for a minute—my mom’s not gonna watch a Fortnite stream. This content is so different. She can relate. Whether you play games or not. Whether you’re tech savvy or not.” Even if you’d never be scammed by one of these tricks, Kitboga said, you might want to watch and learn anyway. “There’s a, ‘Whoa, those are those robo-calls I ignore! Those are the emails I delete!’ You realise billions of dollars are stolen through this thing,” he said.

Unjust as the practice is, there isn’t much else Kitboga can do aside from waste workers’ time and call them out. At first, Kitboga took the fake IT scam industry at face value, imagining that nefarious forces were knowingly, eagerly taking advantage of old women like his grandmother. He’s come to learn that “it’s not black and white.”

“I don’t think a lot of these folks woke up and said, ‘I think I wanna lie to old people,’” he said. The industry is deeply entrenched in parts of the world where good-paying jobs aren’t easy to come by. Even worse, he believes that a lot of the people on the other end of the line don’t know that they’re scammers. They just take a job, cash their cheque, and don’t ask questions. Many are being monitored or recorded and can’t speak freely about the industry on Kitboga’s channel. Countless hours talking to these scammers—even under humorous guises—has taught him that his best chance at fighting back is taking up enough bandwidth that they can’t con anyone else.

“Initially, if I’m honest, I thought there’d be one phone call where I’d shut down the scammers for good,” he said. “At this point, I don’t think I’ll have that call.”