No One Knows If People Eat Pokémon

One question has always haunted me during my years playing Pokémon. If people eat meat in the Pokémon universe, and there are no other animals that players see or interact with but Pokémon, what are they eating? Series director Junichi Masuda says not even he knows.

Masuda has worked on every single Pokémon game at Game Freak, so when I recently went to a press event to ask him about Let’s Go Pikachu and Eevee, I saw my chance to finally get an answer to my burning question.

When I started playing Pokémon games as a child, it didn’t even cross my mind that people would eat Pokémon, but some inconsistencies in the anime piqued my interest. In early instalments of the anime which began in 1997, you’d see Ash and his friends eat meat. Sometimes they’d have a big leg of ambiguous animal meat, other times a hamburger. My coworker Cecilia D’Anastasio sent me this image of Brock and Ash daydreaming about Magikarp Sashimi today, and while I cannot confirm which episode this came from, it’s sometimes referenced as proof that people do in fact eat Pokémon. I also think it’s just horrifying to look at. Don’t do this to Magikarp! 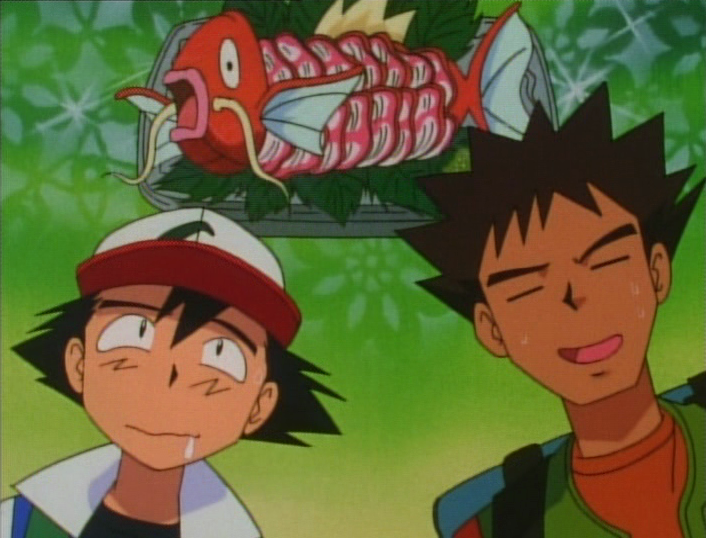 As the show went on, though, these references to meat eating and real world animals diminished, probably because the creators realised they’d disturbed enough children like me. In Pokémon fandom, the anime, especially the early instalments, are not strictly considered canon. Even if Ash eats a Pokéburger, that might not mean they eat Pokébabs in Alola.

The games are more ambiguous about whether or not Pokémon are okay to eat. There are instances of people consuming Pokémon by-products in the Pokémon games. When the Pokémon Miltank was introduced in Pokémon Gold and Silver, its Pokédex entry reads, “It is widely known that drinking Miltank milk when you’re young helps you grow up to be strong and healthy.” In many games, Pokémon poachers also cut off the tails of Slowpokes and sell them, as they’re apparently considered a delicacy. Cutting off Slowpoke tails to sell them was what Team Skull was getting up to in Pokémon Sun and Moon. Even more confusingly, Pokémon are often described in the Pokédex in relation to animals we’re familiar with. Pikachu, for instance, is the described as similar to a mouse, even though you’ll never see a mouse in a Pokémon game. But do people actually eat Pokémon like you and I would eat a steak?

When I asked Masuda what kind of meat people in the Pokémon universe eat, he laughed and said, “I’m actually curious about that as well.” If someone with such a fundamental role in shaping the Pokémon world doesn’t know, maybe we never will. Or maybe Masuda is trying to shield Pokémon fans about a harsh truth about the survival of the fittest.