The Most Irritating Character in Dragon Age: Inquisition

When I first met Sera it was hate at first sight. She’s a member of the enigmatic Red Jennies, a group of subversive agents trying to undermine abusive nobles. She leaves you letters in various places around Val Royeaux and instructs you to meet her late at night for a rendezvous. There, you run into a haughty noble, which she promptly arrows in the throat. I was on board. Then she opened her mouth.

“Name’s Sera. This is cover, get round it,” she says. “For the reinforcements. Don’t worry, someone tipped me their equipment shed. They’ve got no breaches.”

When the reinforcements come out, indeed, they aren’t wearing trousers. “Why didn’t you take their equipment?” my inquisitor asked, quite reasonably.

“Because,” Sera sputters, laughing, “no breeches!”

There’s a breach in the sky, which is what the Inquisition seeks to close. It’s a pun, you see. Sera makes puns. In further conversation with Sera, she will mention stealing their breeches for a third time. You can loot a guard during this quest and find an item. It’s called, “Too Many Breeches.” It contains the looted breeches. Do you get it?

This might be what tickles other people’s funny bones, but it did not tickle mine. Sera, in general, talks fast and talks a lot. She delights in pranks and doesn’t seem to take much seriously. I don’t need all the characters to be serious—hell, I love Iron Bull, who takes the piss out of most things. With Sera, her sense of humour grated. My first time playing this game, I tired of her antics quickly. It was like I was adventuring with a YouTuber who does “social experiments.” My second playthrough I didn’t recruit her at all.

On my third playthrough I’ve been trying to give all the characters a fair chance, so I set out to get to know Sera. I was wrong that there’s not much there for her. What’s under the surface is interesting, but frustrates me just as much as the facade of quirkiness she puts up. 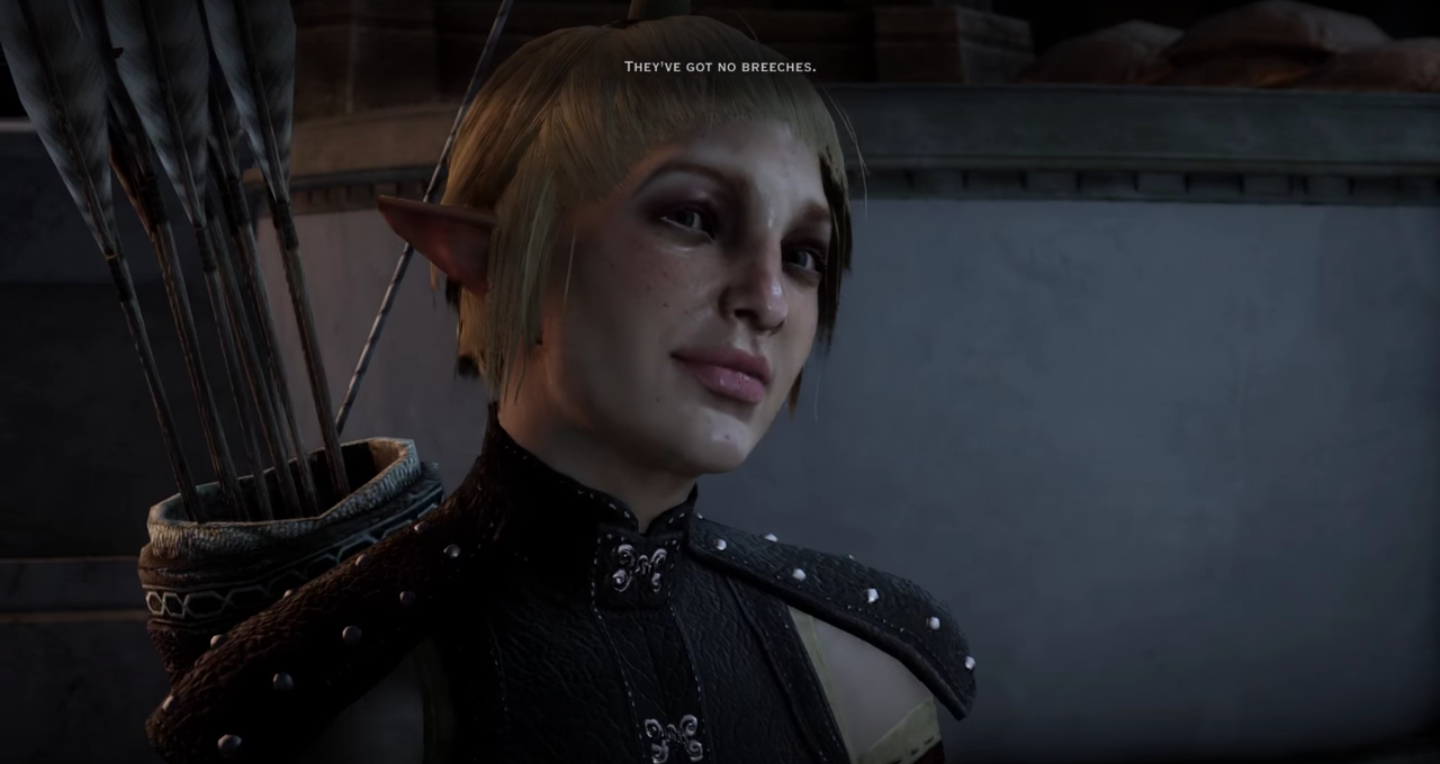 After completing the quest Wicked Eyes and Wicked Hearts, Sera has the most interesting and nuanced things to say. She’s disgusted at the treatment of the servants, who had been casually murdered over the course of the quest. “How many lives are worth one Empress’s arse?” she asks. Even if you try to improve things for the elves and the servants, she points out that it was the vanity of the nobility that lead to the whole convoluted civil war anyway, and we’re just cleaning up their mess. “Lots of people died before there was a hole in the sky,” she says. “That’s who you’re saving.”

No other character I had spoken to had cared all that much about the dead servants, and this resonated with me. The rest of Sera’s character traits made it hard to interact with her.

Take Sera’s personal quest. She asks you, through the War Table, to send the Inquisition’s army on a quick march to stop some nobles from squabbling over a plot of land, with their subjects caught in the crossfire. It reads like a low effort show of power. One of Sera’s many pranks—no one would have expected the Inquisition. After that’s done, we go off with Sera to meet with her informants. Except, because of our actions, one of the nobles was provoked into killing all of Sera’s informants. He’s a real dick, and Sera wants to just murder him. That’s fine with me. What is way more frustrating is the conversation you have afterward.

She refuses to take responsibility for her lack of planning or preparation, which is what got her informants killed. If you push on this at all, she yells at you. She can’t have messed up, she tells you, because the noble was already hurting his subjects. Not doing anything would have been worse! That is absolutely true, but doing something in the way that she wanted, with pranks and little information, lead to a lot of unnecessary death. She has two modes of understanding the world. Something’s either good or it’s bad, and there is absolutely nothing in between. Where was the relatively wise, thoughtful Sera from Wicked Eyes and Wicked Hearts that was so adept at diagnosing a complex political situation? At the end of this quest, she won’t admit that her lackadaisical, prank centric attitude worked against what she has repeatedly stated are her interests: keeping servants alive and away from abusive nobles. Worse yet, if you kick her out, she references that fucking breeches joke for the fifth time.

Sera’s not poorly written. She has a strong point of view and a perspective that makes sense based on her history. She has flaws, giant, glaring ones, that she needs to work past in order to grow. She doesn’t quite have a complete arc, but she makes great strides over the course of the story. Sera’s writing is great—it’s just that her dysfunctions make her irritating rather than interesting. I get exactly where she’s coming from. She’s like a disillusioned 23 year old. I’ve met a lot of those, and even been one. I eventually got over my defensiveness and realised that I didn’t in fact know everything. It took years. Inquisition doesn’t take place over the course of years, though, and while she ends up in a place where she might mature a little, she’s still the Thedas equivalent of a disillusioned 23 year old by the end of the story. 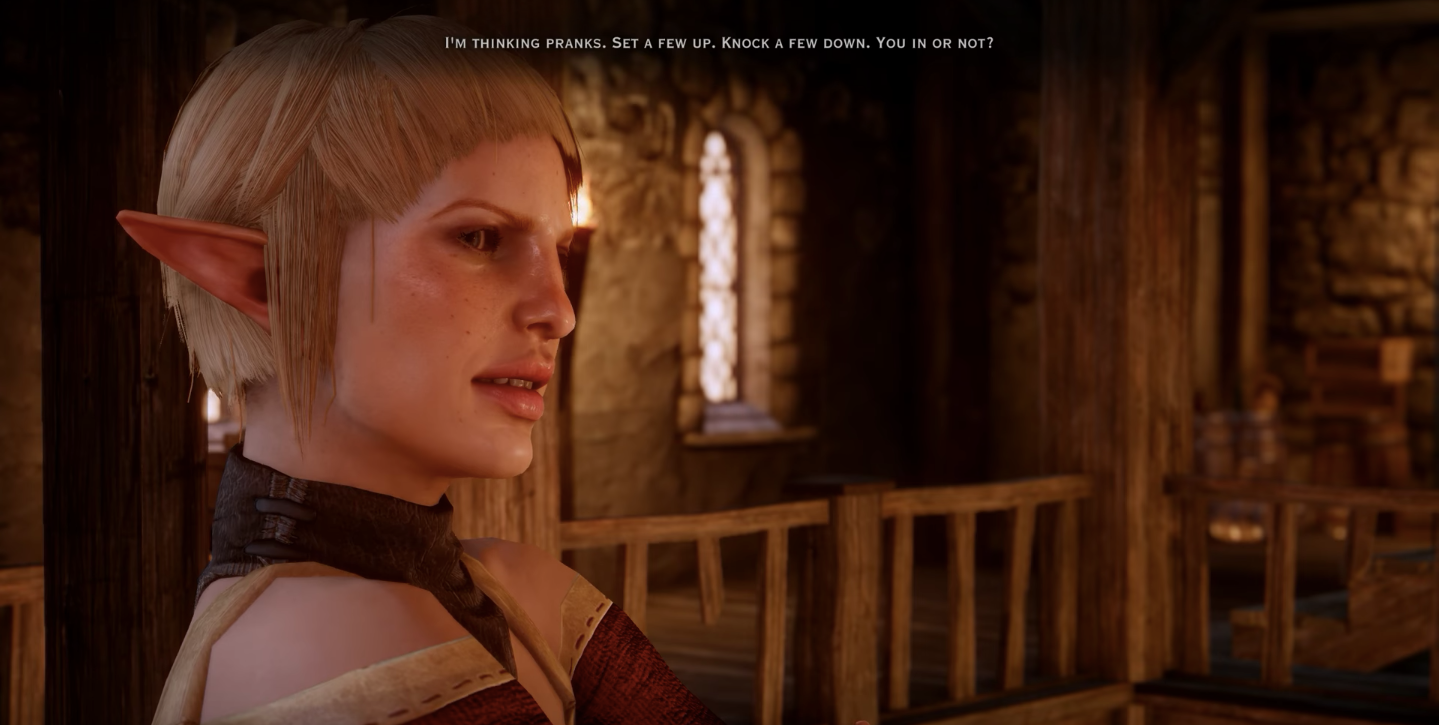 She pushes all my buttons in the same way Xander Harris from Buffy the Vampire Slayer does. Like Sera, he’s a plucky comic relief character with some class baggage that comes off as sanctimonious more often than not. I can see where the narrative is pushing them both, and I can see how Xander does actually change and grow up, even if I never really came around on him either. Sera will probably grow up in a similar way. I just want her to do her growing up far away from me, because right now she is so irritating.

It’s frustrating because I want to engage in the political complications that Sera brings to the table. The oppression of the Elves, the mages, and the bigotry that the Qunari face in Thedas are all well developed. Class issues aren’t as much, and Sera is the only one that cares about them. In order to get some perspective on how the rich subjugate the poor, I have to talk to Sera and deal with her pranks and trousers stealing. As inquisitor, I also have some feelings about class struggle and how to effect change for those who need it. Sera is too self absorbed to have long term plans—her personal issues eclipse the class issues she champions. If you press her hard enough, Sera will tell you that she’s taking back from the rich arseholes, like a Robin Hood figure. Robin Hood, though, had a specific man he wanted to overthrow, to help specific people, overthrowing a specific oppressive system for the betterment of a community. Sera doesn’t have any specificity, nor any real desire to create lasting change for the lower classes.

I kept Sera around this playthrough, if only because I’m trying to see everything that the game has to offer. Later on, when I got back on her good side, I helped her play some pranks on my advisors. She called me an “Inquisitor of the people,” at the end. It felt good to hear her say that, but now I never want to talk to her again.