Secret of Mana: The Kotaku Review

Secret of Mana is a broken game that I will always love. Playing through the recent remake forced me to reckon with why that is.

Originally released by Square in 1993 on the Super Nintendo, Secret of Mana is the textbook example of the “action role-playing game.” Like any RPG, the damage you do to enemies (and vice versa) is all calculated by stats—your level, your weapon’s level, your weapon type, your armour’s rating, et cetera—but to do that damage requires you to get in front of the enemy and take a swing.

At that time, especially here, where examples of the genre were few and far between, it was a surprisingly brilliant situation. It was Mana, and not Final Fantasy, that first made me a Square fan, and I know there are plenty of others who had the same experience.

It also helped that the game had drop-in multiplayer, and was not the solo locked-in-the-bedroom experience that typified most RPGs. I first learned about its charms by jumping into a friend’s game already in progress at his house. I’d just finished A Link To The Past, and all I knew from looking at Secret of Mana is that it seemed like a three-player take on Zelda, which sounded outrageously fun. My brother and I would marathon sessions at his house, and then finally got our own copy later.

Much like the Mad Mallard, Secret of Mana’s helmet-wearing waterfowl, the remake released last month for PlayStation 4 and Vita is something of an... odd duck. (I’ll show myself out.) On the one hand, Square Enix has completely rebuilt the formerly sprite-based game in polygons, re-translated the text and added more lines, and produced an all-new version of its original soundtrack. On the other hand, besides a few little tweaks to the gameplay, it’s a one-to-one recreation of the flow of the original game. The dungeons are the same, the world map is identical, and the plot beats are unchanged. 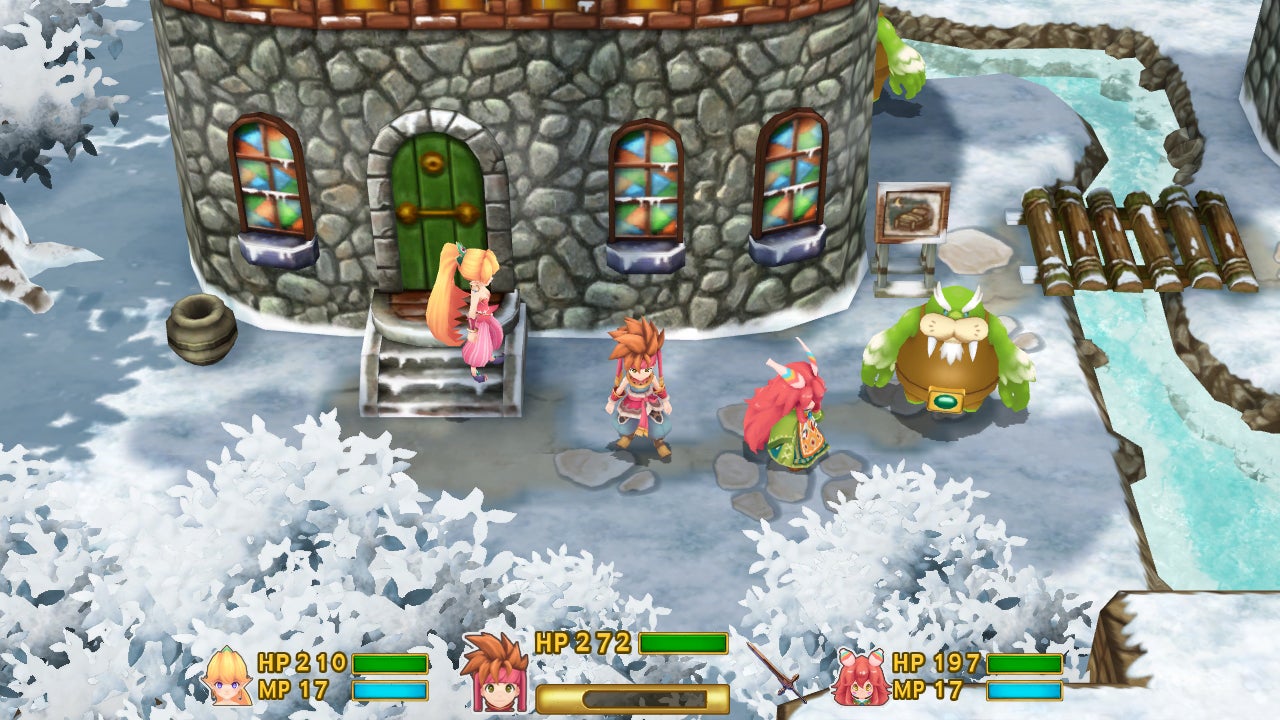 It’s strange to take something that was constructed around the limitations of an early 2D game platform and rebuild it exactly in 3D. To take graphic design elements that you know were created around Super NES features like Mode 7, and render them on the PlayStation 4 as-is. What you end up with is something that feels out of place. It’s a fun game, still, and I think even those who have never experienced the SNES version would enjoy playing this one. But I think just looking at this version, it would be hard to understand what made the original a masterpiece—or how we were able to ignore its flaws.

If I could sum up the appeal of Secret of Mana in a word, it would be “atmosphere.” Square was tremendously skilled at creating sumptuous spritework and soundtracks on the SNES, and in Secret of Mana we see a beautiful combination of the two that creates a cohesive, singular feel to the world.

As it turns out, this was no accident—first-time game composer Hiroki Kikuta carefully tried to compose music to match the magical world the artists were creating, which was an uncommon workflow at the time. He also delved into the SNES’s sound hardware, crafting his melodies around the sound samples that he felt sounded the best on the SNES. So not only did Kikuta create a beautiful set of tunes—which, for my money, is still one of the best game soundtracks ever written—he did it in a way that was inextricably tied to the experience of the SNES. Every few years or so, when I replay Secret of Mana, a big part of the enjoyment is that I can experience that soundtrack again in its proper context.

So it shouldn’t be surprising that an attempt to extricate this magic and put it on PlayStation 4 is not going to have the same impact. The newly-arranged soundtrack is uneven: Sometimes the tracks do evoke the beauty of the originals, but other time the arrangements are totally different and no longer seem to match the mood of the environments. And then sometimes they’re just weirdly bad, as if someone was just sitting in front of a mixing board randomly turning dials up and down:

Fortunately, you can switch back to the original version of the soundtrack in this remake, which I heartily recommend you do. I have a feeling that if someone unfamiliar with the original played the remake with the original sound on, they wouldn’t even know they were listening to 16-bit chiptunes.

Not everything about Secret of Mana gels so perfectly, though. The combat, the very core of the gameplay loop in an action RPG, is notoriously buggy—you can have your weapon positioned right over an enemy, and the attack simply won’t connect. The story doesn’t really hit the complex notes of other Square games from the same time period. It’s a fairly simple tale of a few kids defeating an evil empire looking to exploit the world’s Mana energy: good vs. evil, machines vs. nature, you know the drill.

Some of Mana’s more glaring issues would seem to stem from the development hell it went through. Interviews conducted at the time revealed that the game was originally being developed as a launch title for the Super NES’ CD-ROM add-on, and was cut down to fit on a cartridge once that project was abandoned.

This seems to be why the plot was shaved down to the bare minimum—and also why sometimes when you’re playing the game and you roll up on what looks like it’s going to be a giant complex dungeon, it turns out to be a single room where you’re immediately handed your reward. That said, and cut up as it may have been, one of the sheer delights of Mana is all the different places you go: a forest that changes seasons, a prison ship speeding through the desert, Santa Claus’ house, possibly the moon, the ruins of an ancient technologically advanced civilisation. 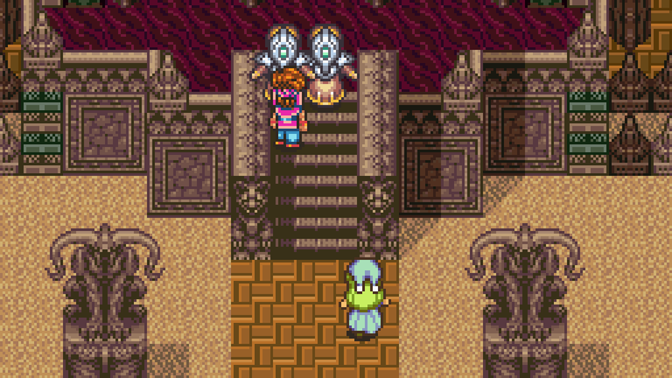 And then there’s the most annoying part of a Secret of Mana playthrough, which is raising your magic levels. Your magic spells get more powerful as you use them, and you need to raise their levels if you want to be able to effectively cure yourself and deal damage to bosses. What might otherwise be an interesting feature is ruined by the fact that the only way to effectively do this is to just hang out by a town for hours draining your MP and then sleeping at an inn, over and over again.

The remake does make a few tweaks to some of these issues. The combat doesn’t seem as buggy. The story’s been fleshed out as best it could be without changing the fundamental beats: Now, when you stay at an inn, sometimes the characters will chat about recent plot developments, or just offer funny non sequitur asides, which gives them much more depth than they had in the original game (while still leaving them as fairly stereotypical RPG heroes).

As if to counter those fixes, the remake introduces new problems. The original game used an innovative and intuitive “ring menu” system—if you wanted to use an item, cast a spell, change equipment, or check on a status during battle, you’d just press the menu button and a ring of icons would appear around your character, in the context of the on-screen action. You’d know which of your three characters’ options you were messing with because the ring would appear around that character. And while the magic system is left as-is, you don’t need to level up your magic nearly as much as you have to in the original game, since this version is much easier. Then again, if you want to get the trophies or achievements for having all your magic levelled up to max, get ready to spend a lot of time in inns again. There’s now a feature that lets you assign shortcut keys to magic spells, which at least makes it a lot faster to cast them repeatedly.

For reasons I cannot begin to explain, it doesn’t work that way in the remake: The ring menu just pops up in the centre of the screen, and there’s no way of knowing whose menu it is. In an update to the game issued as I was playing through it, an icon was added to the centre of the ring showing the face of the character you were on. But even this isn’t nearly as intuitive a UI as the original game had. What’s more, when you opened the menu in the SNES original, it would default to whatever position in the ring you were on last. The remake always starts from the same place, making it more laborious to navigate.

Another thing the remake added: Crashes. I can say without qualification that Secret of Mana is the crashiest thing I have ever played on a console. In my life. It blue-screened and dumped me out to the PS4 menu about 10 different times during my 15-hour playthrough. The patch apparently alleviates this somewhat, but I still had crashes after updating. Fortunately, this version of the game also auto-saves your progress every time you enter a door, instead of only letting you save at inns. So you’re rarely more than a minute or two away from where the game crashed.

If most of the fundamental problems with the Secret of Mana remake are problems that it inherited from the original game, why am I not bothered by them as much when I play the original? Is it because the artistry on display in the original is so exceptional that it helps smooth out those issues, or is it because we all just think the best things ever made were the things we discovered when we were 13? If I’m being honest with myself, there’s some of both in there.

I do think it’s a good thing that the remake exists, and if someone asks if they should play it, I wouldn’t say no. If a remake with a contemporary look on a modern platform can expand the popularity of the Mana series, and maybe even cause more people to take a look back at the original, I’d call that a win.

But if someone expressed an interest in playing Secret of Mana, I’d first encourage them to buy a SNES Classic. (Or the WiiWare version, or the three-game collection for Switch, if that ever came to the West.) If that didn’t work, I’d say, okay, play the remake, but don’t forget to at least change the music to “Original.”