Into the Breach: The Kotaku Review

Into the Breach is a game about the accumulation of small decisions, good or bad. It’s a game that never lets you forget your past runs, especially your failures.

Into the Breach is made by Subset Games, the studio behind 2012’s FTL, the hit strategy game that charged players with keeping a spaceship in flight under increasingly stressful decisions. It shares its predecessor’s need for tactical thinking, its randomised new abilities, and its need to manage power. Into the Breach also shares FTL’s commitment to transparency, to creating a game that gives you all the information you need to succeed or fail based on your own skills. It’s a special game.

We’ve already written about how Into the Breach works, but here’s a recap: turn-based battles happen on an eight-by-eight grid. You control a trio of time-travelling mechs fighting space invaders called Vek, who spawn from the ground. The Vek want to destroy the clusters of buildings that dot the grid; you want to protect them. Your overall health comes in the form of a bar representing your power grid, which ticks down when buildings are destroyed. Lose all your power and you start again, carrying over one of your pilots if you have one left alive.

That power grid stays constant across the game’s four islands, which each have their own biome, overseer, escalating difficulty, and end boss, all building up to a final conflict. There are optional objectives that can restore power and an option to buy power between islands, but the returns are meagre. 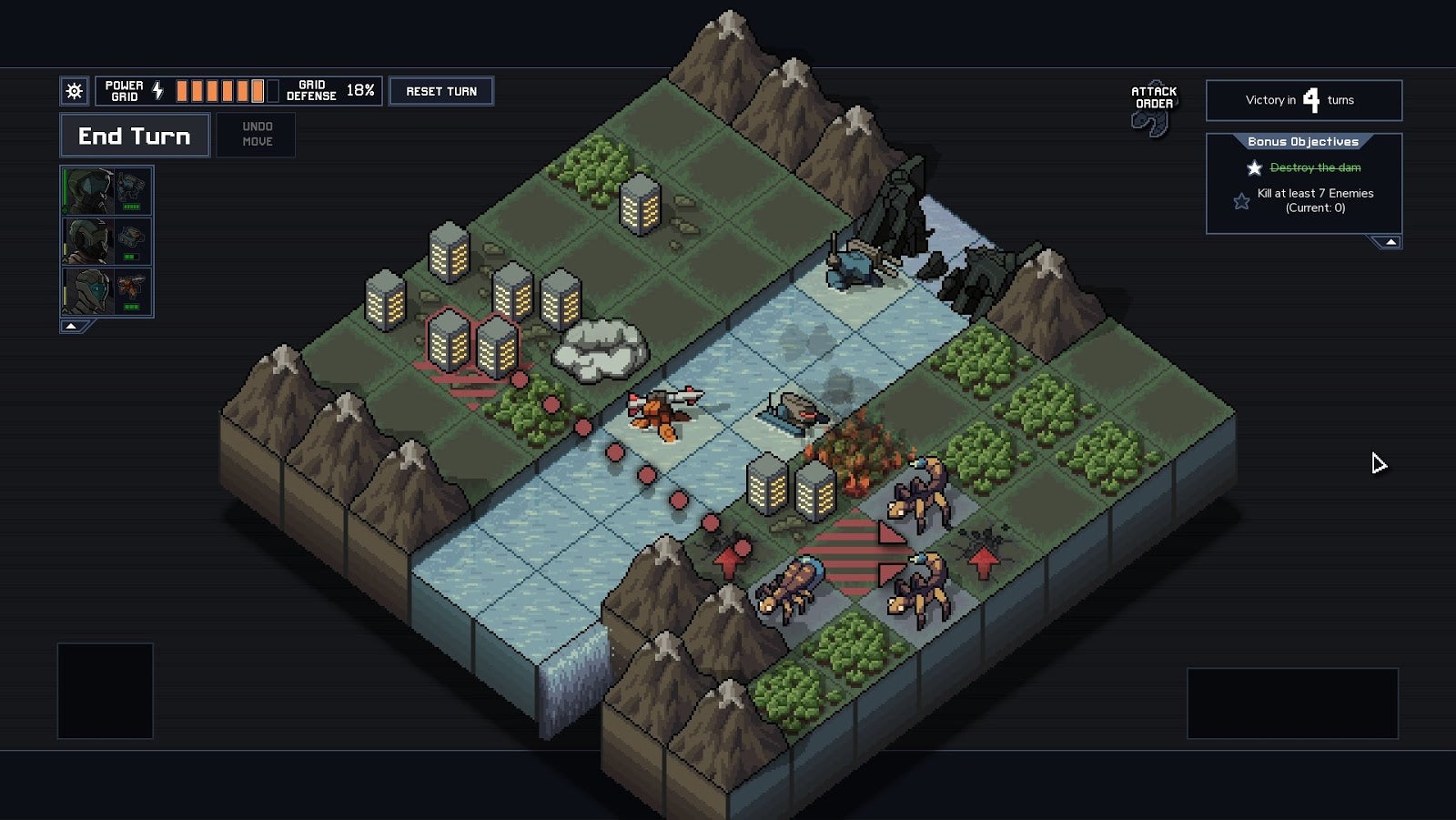 The power grid indicator is a bright orange meter that looms in the upper left hand of the screen. It shows how much power you have across the whole game. It’s a constant reminder of how well or poorly you are doing and how well or poorly you’ve done in the past. The cost of any battle gone wrong is paid in the next fight. Losing too many buildings makes preserving the next ones even more important, contributing to a mounting pressure. Conversely, past successes provide room for failure and a cushion to experiment with pushing the game’s battles to their limits.

The game’s battles are tense and minimalist. On each turn, the Vek move along the grid and then broadcast what they’re going to do: attack a building, attack one of your mechs, spawn from the ground. You then have a turn to stop them, however you can. Each mech has a different ability; they’re unlocked as squads, but you can also mix-and-match by hand or randomly. Some do straightforward damage, while others can push or drag enemies to different tiles, stun them, or create shields to protect allies and buildings. Pods that sometimes drop onto the battlefield can contain new weapons, pilots, or reactor cores that let you add and power new abilities. In one game, I got a pilot who turned a mech’s self-heal into a melee attack. In another, I got a weapon that hurled rocks, doing damage and creating temporary barriers. Adding and subtracting abilities isn’t quite the tactical long-term planning of FTL, and I was never capable of doing enough damage to feel confident. You don’t need to do that much damage, though; your strongest weapon is time. 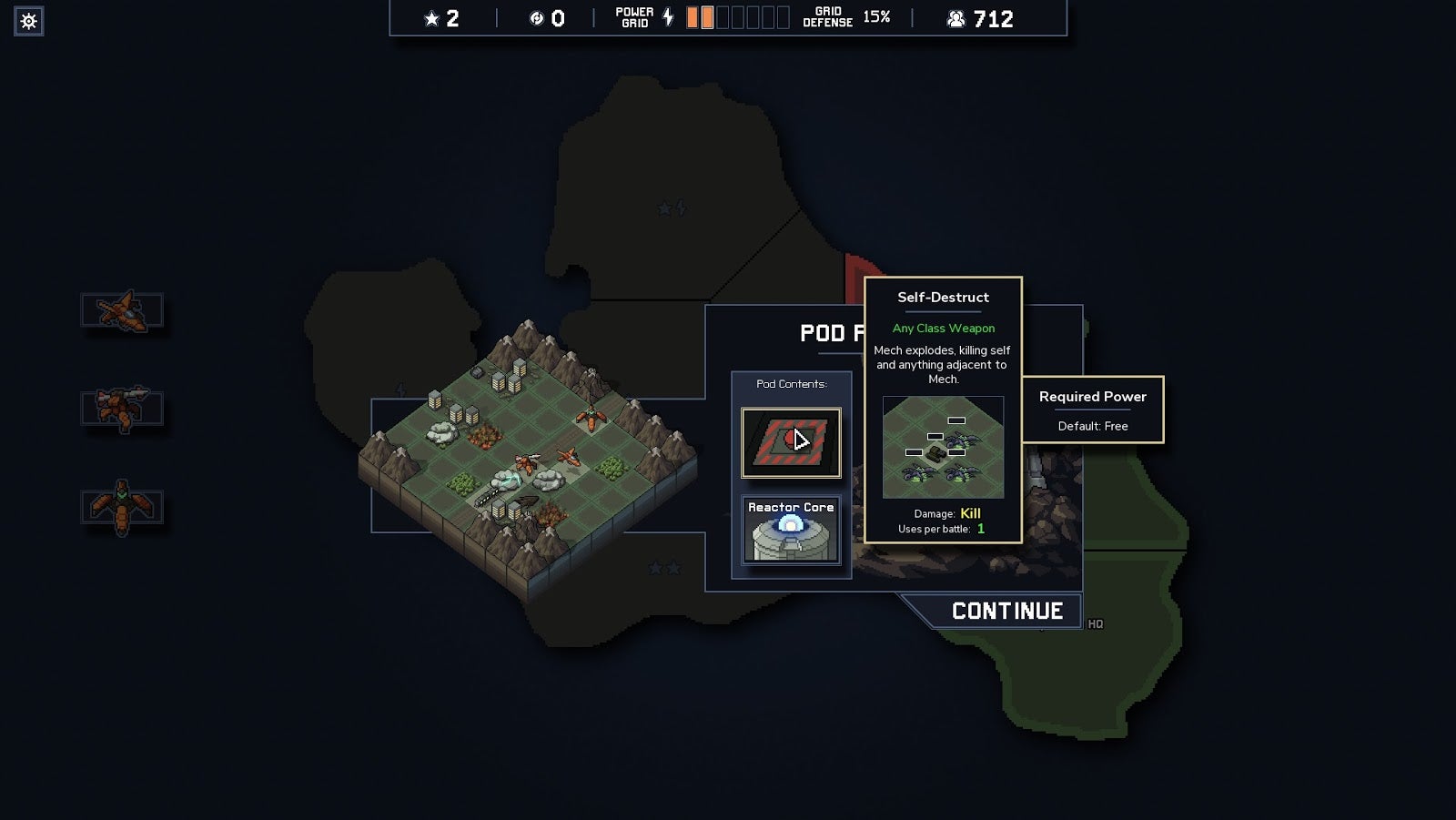 The contents of a pod.

The battles are a bit like seeing into the future. The Veks telegraph their attacks, and there are no XCOM-style misses or probabilities. You take your turn after the Veks take theirs, and they remain frozen in time, committed to their actions as you rearrange circumstances around them. Since you know exactly what will happen, you can use the Veks’ predictability against them.You can knock an enemy over a square, re-aiming its attack from a building to an empty square or, even better, another Vek who will sit there with no idea what’s coming. You can push a Vek onto a block where another one is spawning to damage it while giving yourself some breathing room. I’ve manipulated them into meeting objectives, into killing each other, into falling prey to environmental hazards.

Into the Breach’s clarity makes all of this possible. You can check the order events will happen into see if an environmental factor—lava, lightning strike, parts of the map crumbling dramatically into the void—will kill an enemy before it attacks. You know how many spaces enemies can move and what targets are within their reach. You can check your own and enemy abilities, complete with an animated explanation, at any time. There’s even a countdown of the number of turns left until the Vek will retreat, winning you the battle. No bit of information is hidden; you have no excuse not to know what’s going to happen next. Instead, the biggest variable is yourself.

I’m not the best at strategy games, but Into the Breach lays bare exactly why. The game doesn’t keep any secrets, pull out any surprises, or make any mistakes. Despite everything it gave me, I still messed up. Failed runs read like laundry lists of my most searing moral faults: I lost this game because I got impatient and just acted; I lost this one because I’d been drinking a little and forgot what one mech’s ability was; I lost this one because I was so focused on pulling off a clever move in one corner of the grid that I failed to notice a Vek targeting a building in another corner. These failures turn so many of the emotions games elicit—anger, rage, embarrassment, and, yes, triumph—back on me. Into the Breach lets you know exactly how good or bad at it you are, with no one to blame but yourself.

Into the Breach requires thinking through the consequences of your actions, not just one turn or round but across the whole game. It lets you see into the future, knowing what each enemy will do. With its fluctuating power grid, it lets you see into the past, to remember what you’ve done. But the present—my present, my mindset, rather than the state of the game—always remained murky and unpredictable. Not knowing what you’ll do is part of the fun, the teasing-out of possibilities of a strategy game. But I also didn’t know what I would do to mess it up, what mistakes I’d make, what consequences I’d overlook. You can undo moves before you commit to an action, and once every round you can reset an entire turn. These options seem like a machine’s affordance to your own human nature, but they never quite erased the reminder of my mistakes. 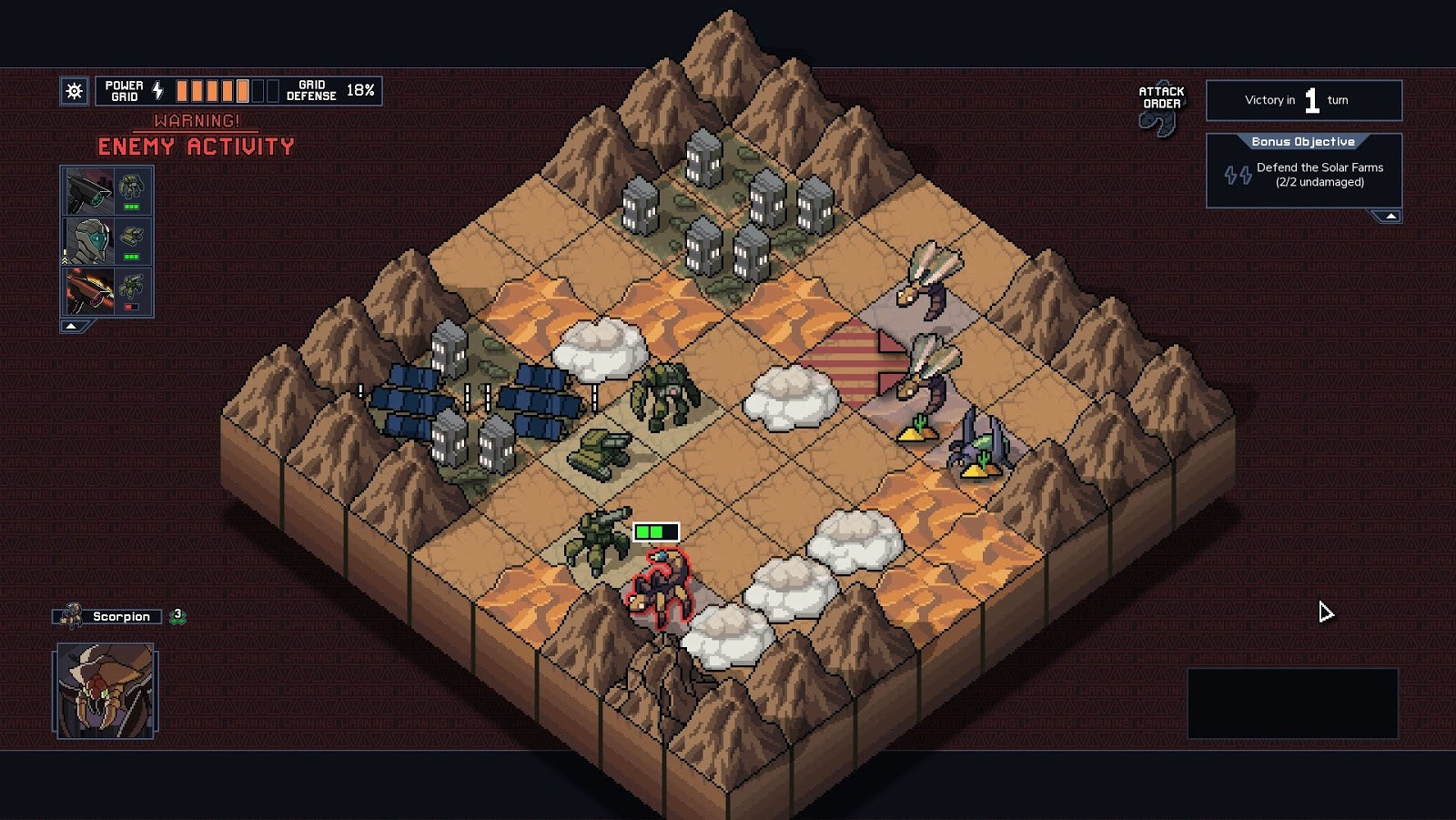 Into the Breach is a hard game, and there will be inevitable losses no matter how well you play. My knowledge built on itself, and I slowly got better. Each of my new runs was inspired and informed by failure; each new success stood atop that. It may be a hard game, but the temptation to improve was irresistible. I didn’t want to stop playing.