There are too many board games about pirates. But Black Fleet is one you should fight through the fatigue for.

It’s similar in scope to other buccaneering board games, since it involves merchants carrying goods across the Caribbean and pirates raiding (or trying to raid) them. But where Black Fleet is cool is that it puts players in control of something else as well. 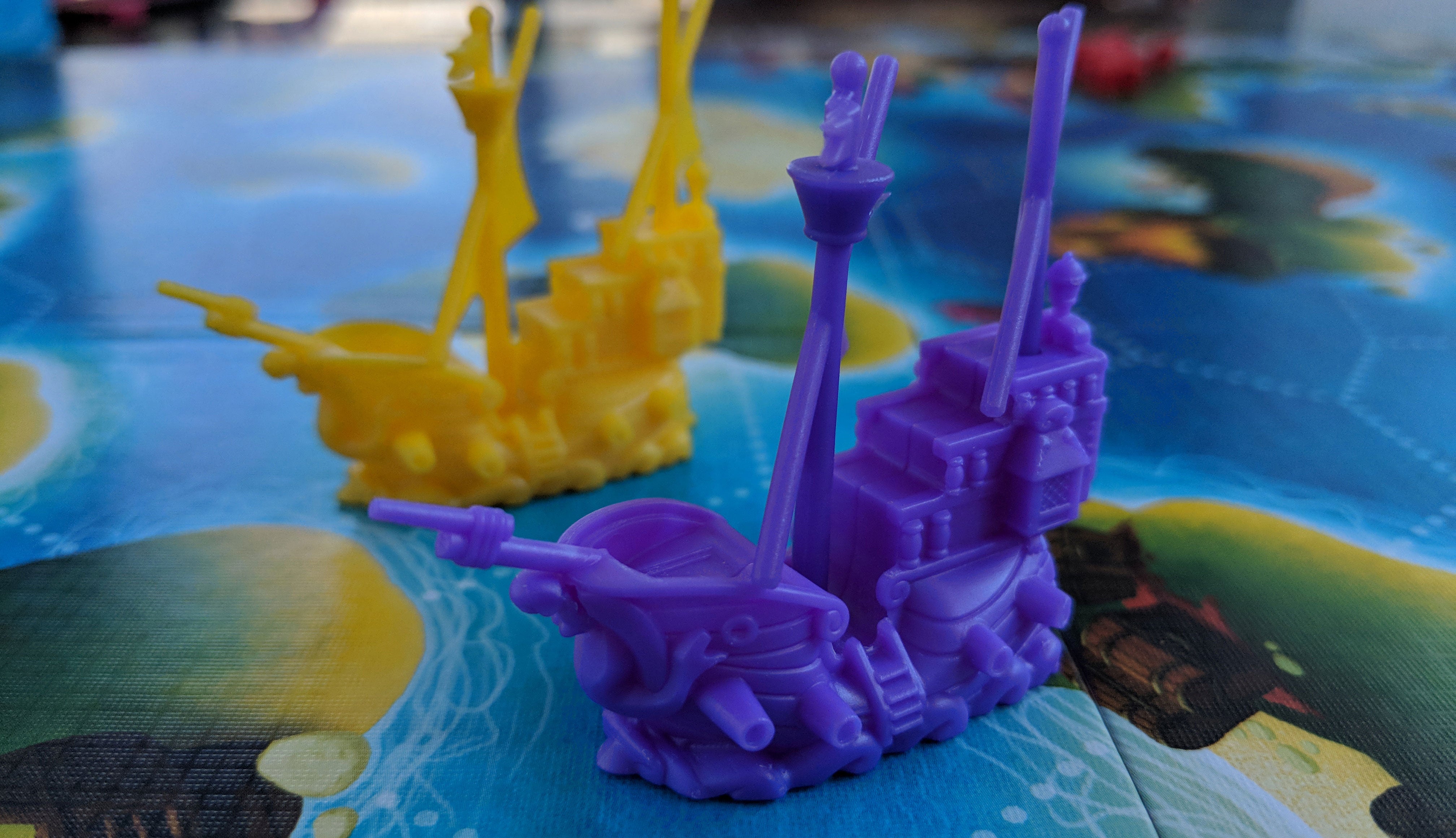 The metal coins included are a nice touch, but the detailed miniature ships are also a joy to play with, especially since they come with special compartments that the cargo slots into.

3-4 people can play, and each person is given control of two ships: a merchant and a pirate. Your merchant ships are designed to pick up cargo from a port and ferry it across the board, selling it at a different port for cash. Your pirate ship, meanwhile, is designed to raid other player’s merchant ships, seizing their cargo.

This creates an intricate zig-zag across the board, as players must simultaneously manoeuvre their pirate ships in for a raid, while at the same time making sure their own merchants are protected (or far enough away to escape harm).

Making matters more complicated, and this is what makes Black Fleet stand out, is the presence of the navy. There are two non-aligned ships on the map that can be controlled by all players, and these are able to engage any nearby pirates, after which the swashbucklers are forced back to the corner of the map, (usually) far removed from the action. 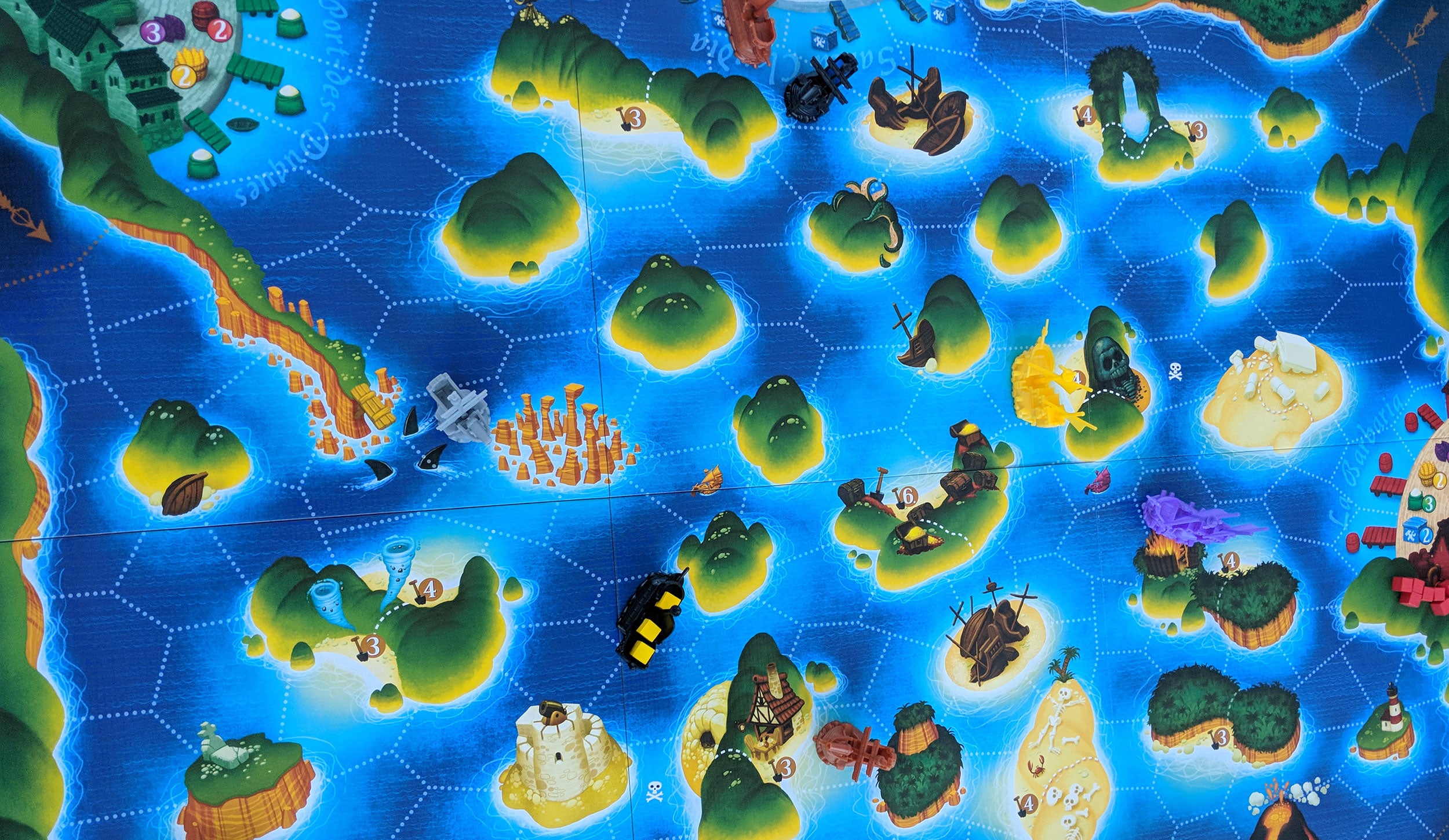 The board looks fairly straightforward, but power-ups you earn through the game allow you to perform stunts like sailing right over islands, helping evade pursuing pirates/naval ships.

The merchants and pirates are directly controlled by every player, every turn, but the navy works a little differently, as only one ship is activated in accordance with a card you can play. So some turns you might get to control the yellow navy. Another turn you’ll get to move the purple one.

Because you can never anticipate which naval ship is going to be moving at any time, pirating efforts get frantic. You might be closing in for the kill with your pirate, ready to plunder some loot, when you notice the yellow naval ship nearby. The players taking their turn before yours might play cards activating the purple navy, leaving you clear to move. Or they could play the yellow and scupper your plans.

And when it’s your turn to move the navy, you don’t just have to try and catch your opponents. Sometimes it’s more beneficial to take control of the nearest naval ship near your pirate and move it away, clearing you a path. 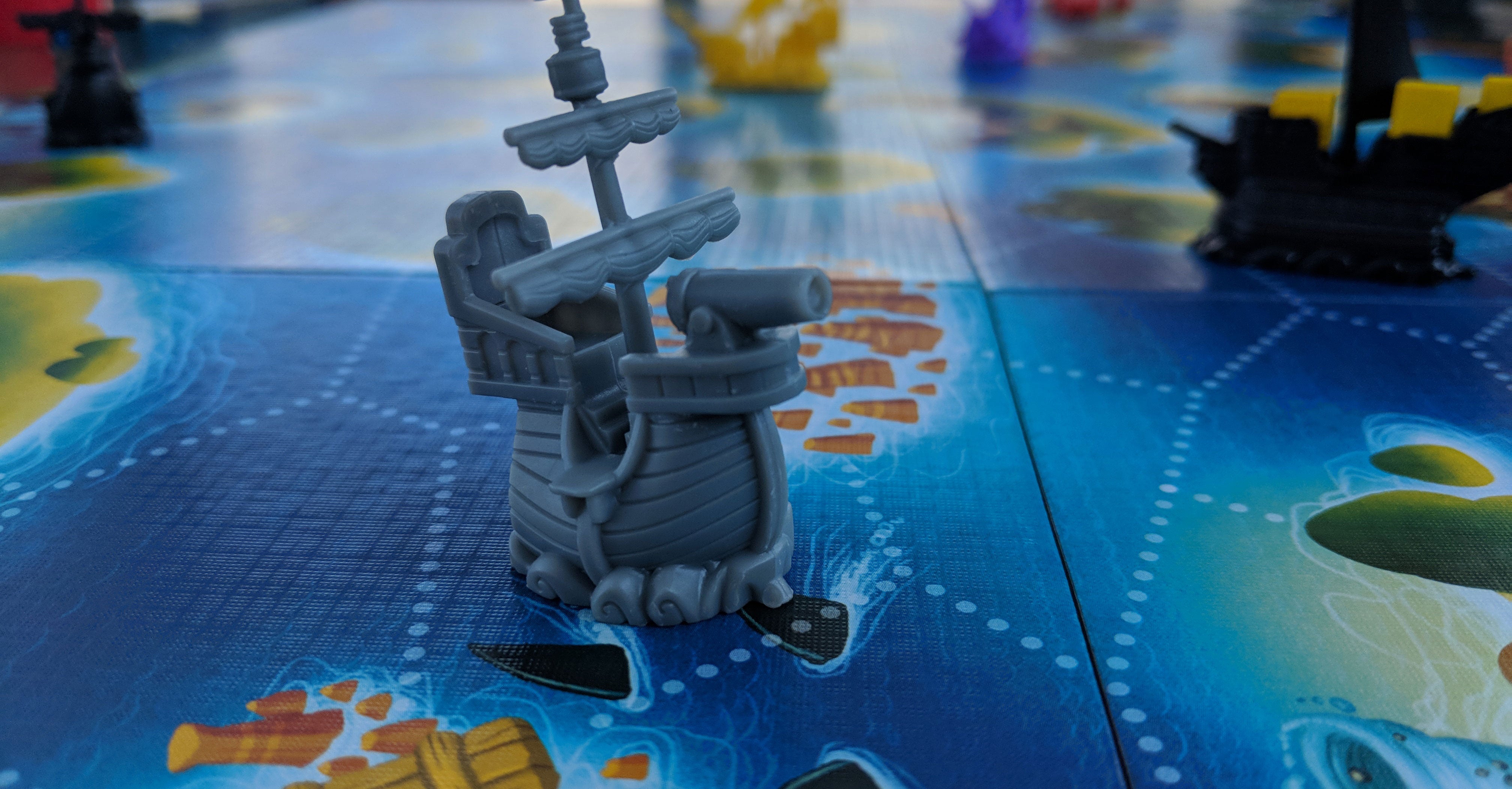 Just look at this li'l guy, tootin’ around the Caribbean on his little plastic wave.

Tying things all together is a progression system built around a number of cards each player has, which are slowly unlocked as you play Black Fleet, giving you access to perks and power-ups that escalate the race to gather enough money to purchase a victory card, ending the game.

Speaking of purchasing, I’d be remiss not to mention the fact Black Fleet ships with that most pleasing of luxury components: metal coins. For a game about pirates and the exchange of plunder, tossing metal dubloons around the table helps make the whole thing just that little bit more fun.

Black Fleet is a fairly simple game, with a minimal number of rules and a short playtime of around 60 minutes. It’s a blast to play though, the competing elements zinging off against each other really well, and while I played it with a bunch of boozy adults I think it’s equally well-suited to a family game night.