A Shooter Where You Risk Losing Your Gear Forever

Escape From Tarkov is a military shooter currently in closed beta all about shooting other players and stealing their loot. Set in a fictional Eastern European city rife with conflict, Escape From Tarkov feels like a mashup of ARMA and Borderlands.

Players embark on raids to different locations and scrounge around for guns and loot to take with them if they can find the extraction point. Tarkov’s most important mechanic is the risk of losing everything you bring with you into a match. It’s not always a good idea to bring your best gear out on missions though, since you’ll lose everything permanently if someone kills you and steals it. Before joining a match, players can gear up with as much gear as they want, but players can take gear off each others’ corpses too. If another player makes it to the extraction point with your gear, it’s gone for good. The entire game centres on a risk/reward setup in which starting a match with a strong loadout gives a significant advantage, but one false step can lead to disaster.

Tarkov is a hardcore shooter that tries to capture all the details of using a firearm. Weapons are highly customizable and can be modified with a variety of stocks, sights, and rail attachments. Each weapon has a distinctive heft and recoil pattern. The level of detail is impressive if a bit fetishistic; players must inspect magazines before reloading and can only be shot a few times before bleeding out and dying. Guns are powerful, frightening things in Escape From Tarkov and each enemy encounter poses significant danger. This turns matches into slow, methodical affairs full of sneaking and sudden death. I streamed it last night on Kotaku’s Twitch channel:

I was still learning the basics but this was an intense match.

In addition to other players, Tarkov populates maps with NPC mercenaries called SCAVs. They patrol maps looking for players to ambush and gunfights to join in. But not every SCAV is AI-controlled. Players can also choose to join matches as SCAVs with random loadouts, and they can take any loot they find. It’s a way to join matches without the risk of losing gear. A small cooldown period prevents players from always joining matches as a SCAV and grabbing risk-free loot. One of the most exciting moments in any Tarkov match is encountering a player-controlled SCAV among a pack of NPCs enemies. 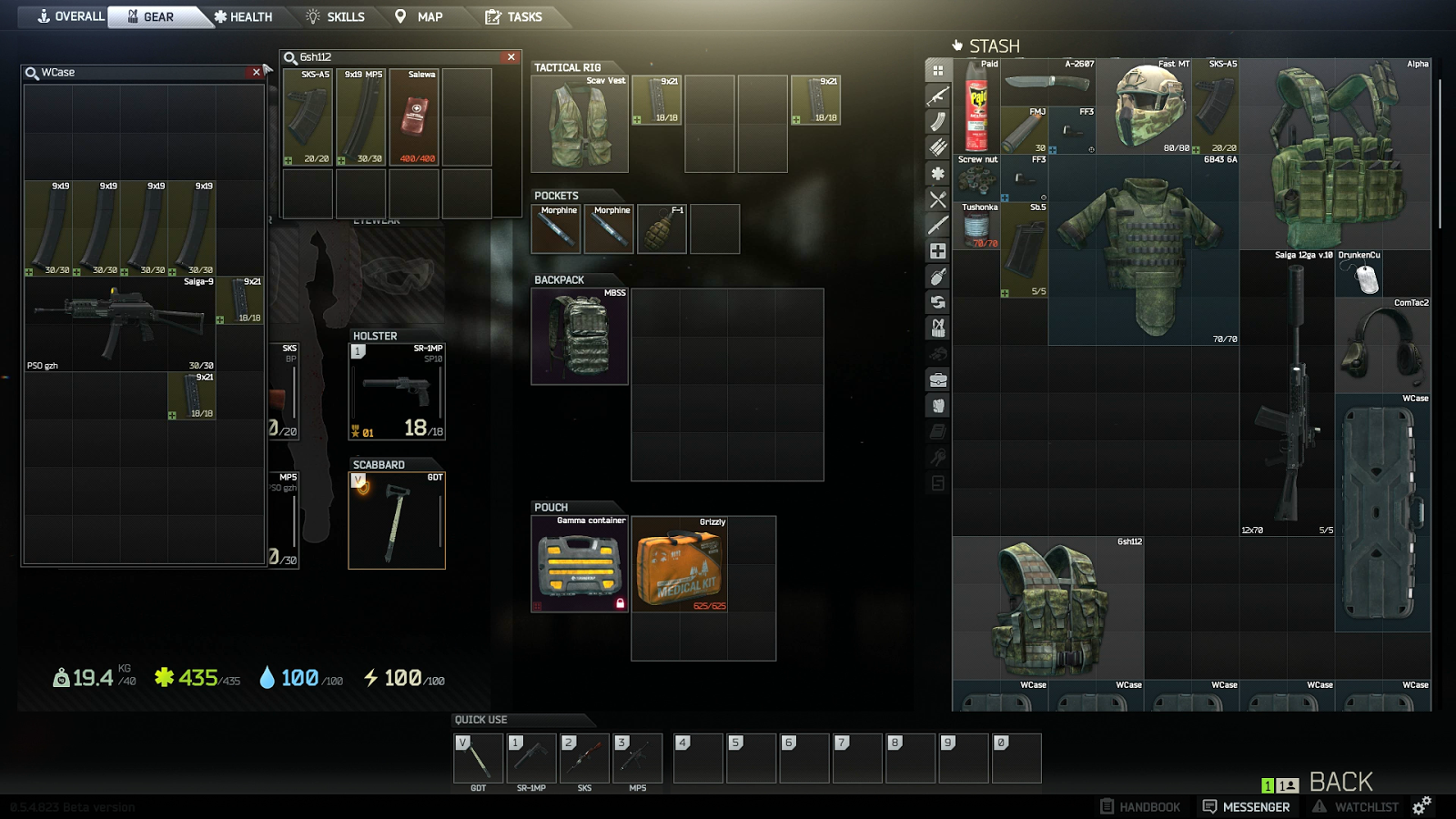 You’ll spend just as much time managing your inventory as shooting baddies.

Another aspect of Escape From Tarkov is inventory management. The emphasis on realistic gunplay and customisation means spending a lot of time in menu screens before matches, finding the best ways to kit out your soldier. Loading the proper bullets into magazines and placing them correctly in your vest pocket might not be the most exciting thing in the world, but it’s a surprisingly meditative process. Mixing armour and backpacks before loading them up with supplies is a tricky cost/benefit analysis. Figuring out the biggest bang with the least amount of cost turns inventory management into a genuine puzzle.

While Tarkov’s various mechanics create a tense experience, it’s currently undercut by various technical issues. This is understandable—the game is in closed beta, after all—but the idea of Escape From Tarkov is currently grander than the execution. Framerate dips heavily on certain maps and matchmaking is incredibly slow, sometimes in excess of three or four minutes. Tarkov’s current state is very rough, and it will take some time before it’s ready for a larger playerbase.

Still, going out on raids and stealing gear before getting into a massive gunfight that you barely survive is a thrilling experience. Tarkov is punishing, but there’s a lot of fun to be found in mastering its complexities and slowly becoming a hardened mercenary.