The Division’s Free 1.8 Update is Better Than Its Paid Expansions

After numerous multiplayer-centric patches and expansions, The Division finally got a big improvement for solo players this week. The new update is shockingly large and shockingly good. It seems designed to make every type of Division player happy.

Update 1.8 adds two new, enemy-filled zones called West Side Piers to the game’s Manhattan-based map, throws in a smartly executed co-op horde mode that uses the game’s setting to great advantage, overhauls its quasi-PvP Dark Zone because the developers were worried that it was becoming only-PvP, revamps its Underground expansion mode and adds a new, pure PvP mode.

I’ve not even tried half of it. I’ve not ventured into the revamped Dark Zone, where players must toggle their player-killing rogue status on before shooting anyone. And I’ve not sampled the new PvP Skirmish mode because I don’t care about PvP. The great thing is, I don’t have to. That’s not the stuff I’m looking for more of in The Division. And the stuff I have been looking for more of? For over a year? They’re finally delivering. 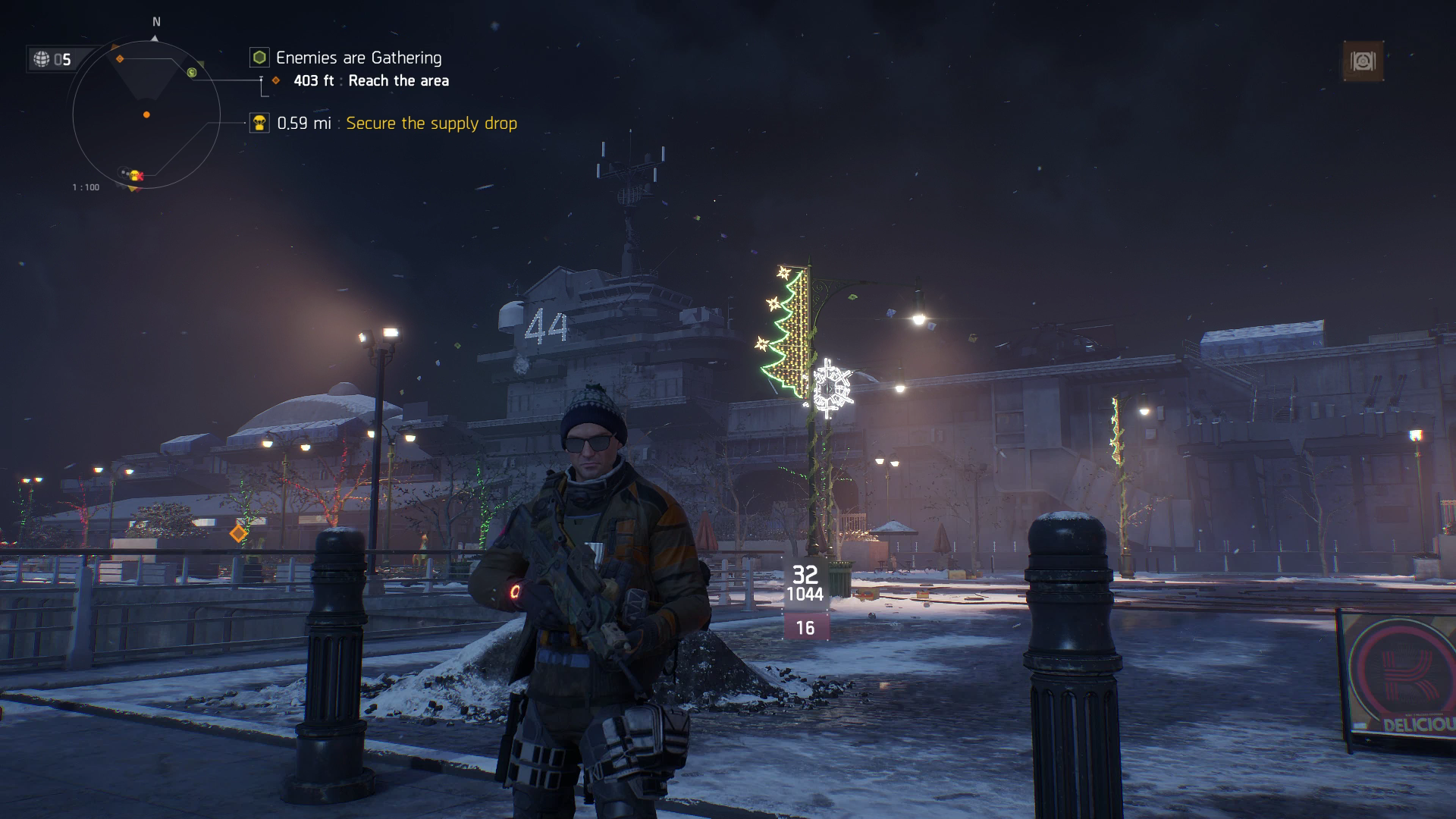 The Division’s version of the USS Intrepid looms large in 1.8 as a useful landmark and a great setting for the game’s new horde mode.

I’m mostly playing through 1.8’s West Side Piers. I’m doing that because I played through The Division’s campaign largely solo. I didn’t play The Division as a social game. I did the game’s missions through random matchmaking, but I trekked through its massive recreation of Manhattan on my own. I played the game as an explorer, hunting down hundreds of audio logs as I listened to interesting side stories about citizens who struggled to survive in a city beset by a biological weapons attack.

West Side Piers is made for players like me. It expands the map to Manhattan’s west side highway, from 46th Street to 60th Street, mostly west of 10th Ave. It adds the highway as well as a car wash, a disco, a park and other zones ripe for conflict with the game’s enemy factions who, by the way, have now started teaming up in these new zones. The new terrain is built for how people like me played the game. It’s been littered with audio logs that tell new multi-part stories. There’s one about a girl leaving her grandmother voicemail updates about the increasingly dangerous actions she’s taking to survive in the city; another about a woman trying to figure out whether an incorrigible radio host is real; and even one set of recordings that’s narrated by the game’s primary antagonist. New audio logs! No snark: this is what I was looking for.

The Piers aren’t huge, but travel through them is slowed by abundant spawns of enemies. The game might actually be spawning too many enemies now, though its improved generosity with loot drops makes them less of a bother. More impressively, West Side Piers is accompanied by a randomised mission system that is repeatedly posing a new challenge to players—fend off waves of attackers on the docks, chase down a drone from the rooftops, destroy a signal scrambler in an alley, eliminate three named enemies marked on the map—even as it also keeps popping up new short term tally goals like scoring a set number of kills at long range or with a pistol or so on.

Many of The Division’s recent additions feel like tests for systems that could be used in a sequel. Like the game’s newish Global Events system, the West Side Piers mission generators would best be locked in for The Division 2. They make wandering through the game’s open world perpetually interesting. They’re set in a small enough pair of zones in 1.8 that their appeal may fade after several more hours, but such a system applied to a game the size of all of The Division in a sequel could have long-lasting appeal. 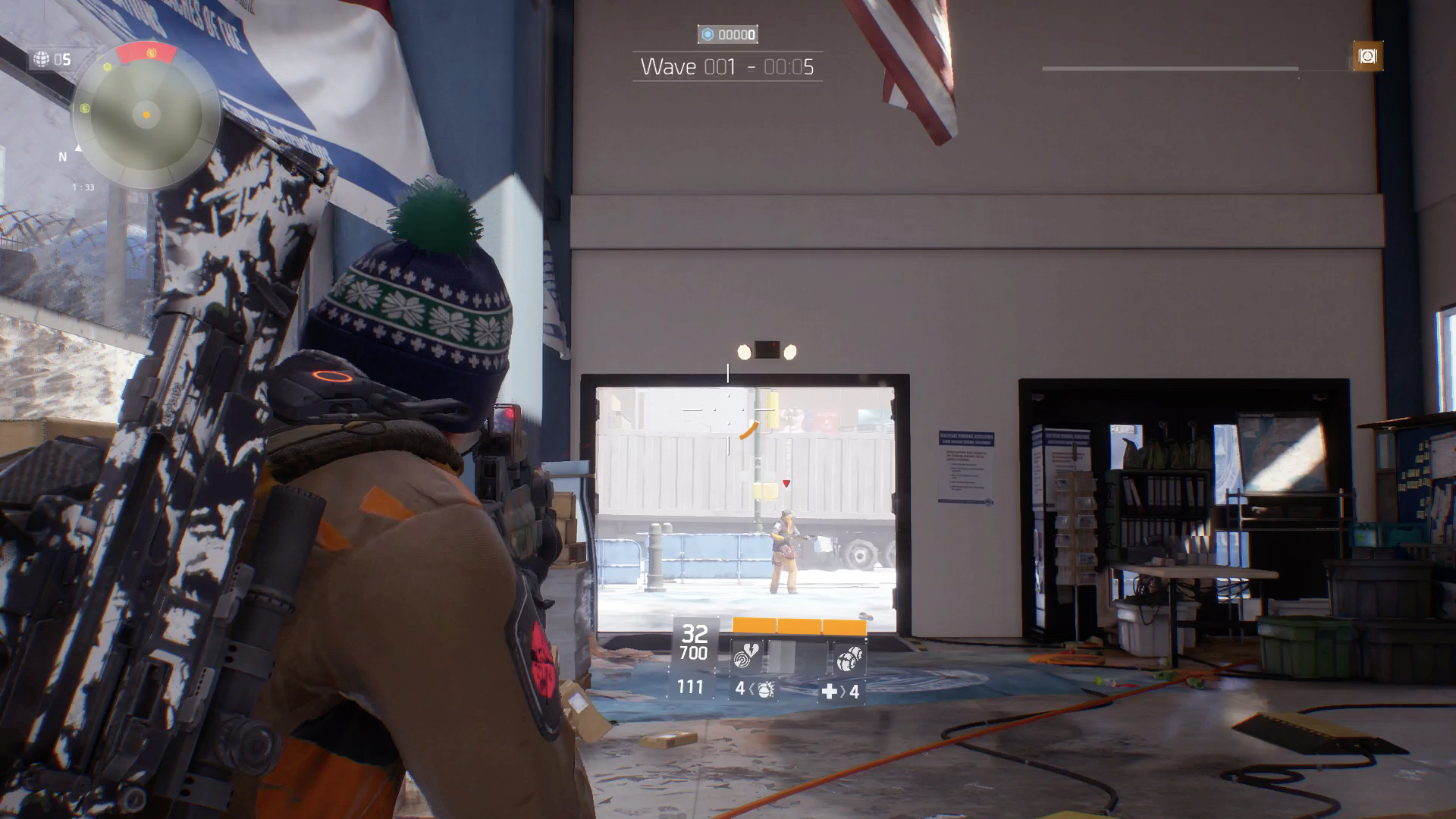 The doors to the game’s open world are about to close, and the horde mode Resistance is about to begin.

On the western edge of West Side Piers looms a recreation of the USS Intrepid, an aircraft-carrier-turned-museum permanently docked on the west side of real Manhattan. To get to it in real life and in the game, you must first walk through a building at the base of the pier. In the game, as soon as you walk into that welcome building, you’re potentially walking into a horde mode match.

You can stop to find people to play with, or you can just stroll on inside. A brief countdown begins, and then the building’s doors close. You’re locked inside. Several enemies spawn in and just like that you’re playing Resistance, racking up kills against waves of bad guys. As each enemy dies, they drop SHD tech points. It costs 1250 SHD to open the doors on the far side of the building to the dock beyond. Once you are fighting on the dock, you’re trying to earn enough points to open the doors to the carrier moored alongside it. Eventually you’re fighting waves of enemies in the carrier itself, to which you’ve gradually progressed from those initial shootouts in the streets the streets.

The Division’s realistic setting has occasionally undermined the game. Enemies that take lots of bullets seem more ridiculous and annoying when they look like bad-guy commandos than they would were they to look like Diablo demons or Destiny aliens. For Resistance, though, the setting is an asset. The concept of a horde mode that involves a battle that expands from building to building and even into a docked aircraft carrier makes sense, is easy to mentally map and is just plain cool.

There’s a second area of West Side Piers reserved for a second Resistance map. I haven’t tried it yet, and I’m not sure when I will. Reaching it requires more combat up through the West Side Piers, and every time I get into the thick of it, I find myself distracted by a new random mission or the chance to discover more of those lovely, lovely audio logs. 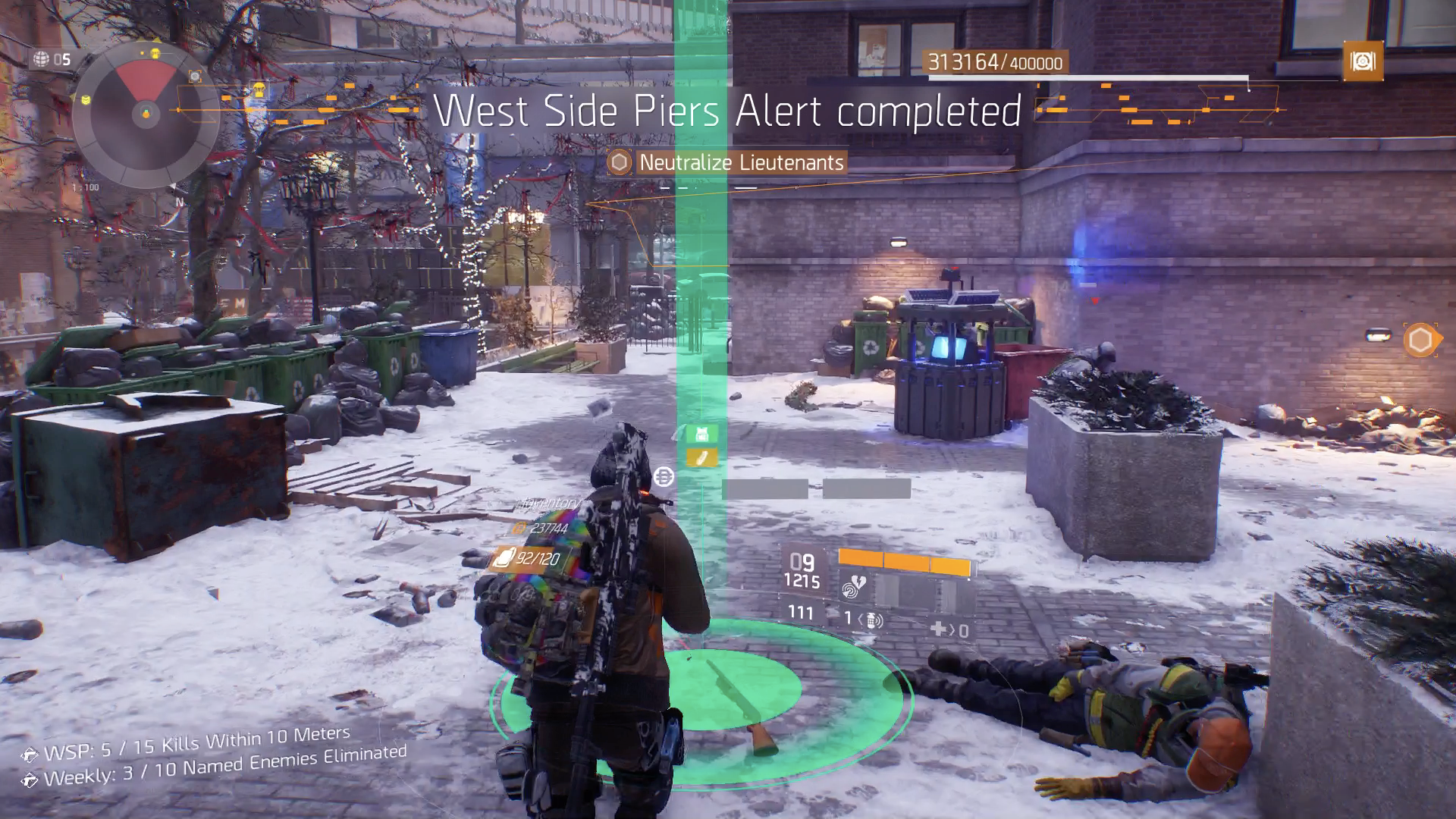 Division 1.8 isn’t just fun. It feels like an apology for the game’s ill-tuned season pass, which experimented with a survival mode but otherwise focused on multiplayer-centric offerings and ignored those of us who wanted more places to explore and more stories to discover. Twenty-two months after launch, we’re finally getting some of that. In an update that also adds and improves multiplayer. For free. Go figure.

From the plague of PC cheaters to those disappointing early add-ons and expansions, The Division has certainly had more low points than high points. The lowest point may be arguable, but the highest point is not. Even just based on the small part of the post-1.8 game that I’ve played, The Division’s high point is right now.