I play a lot of video games, but I don’t see many great glitches.

Say what you will about modern gaming’s abundance of patches, but major glitches are still fairly rare. I fall through the floor of a third-person action game maybe once every two years. I played all of Red Dead Redemption and never met the donkey lady. I wish I’d seen that faceless lady in Assassin’s Creed Unity. It is therefore still oddly thrilling to me, if a little nerve-wracking, when something goes magnificently wrong.

I finally got a good glitch this year while I was playing Assassin’s Creed Origins, the latest in a series seemingly primed to be full of glitches. I’m surprised I didn’t get one sooner. AC games, much as I love them, have long been messy. And this one, relatively polished as it is, has been reported to have bipedal crocodiles and pulled-taffy protagonists. My play clock now says 40 hours, three minutes, and I’d say it was hour 37 or so when I finally found a glitch.

I’d picked a quest that was located on the west bank of the game’s massive Lake Mareotis. I sailed my character Bayek in from the east. As he approached the western shore, I spied two boats that appeared to be dancing in the air:

Assassin’s Creed Origins is intended to be fairly historically accurate. It’s not really a “flying boat” kind of game. That stuff is for JRPGs. Nevertheless, there were these two conjoined boats fluttering like kites, then separating.

At first I simply enjoyed the spectacle. I’m fine with a glitch that looks silly, doesn’t break my game and will surely go away once I restart or fast-travel away. I’m no fan of game crashes, which I do experience several times a year even on console, where you’d expect that kind of thing to be more rare. All was well with my dancing AC boats. Then the framerate crawled, and I began to worry my game would break. I briefly worried the game would crash and lose my progress, but the framerate fixed itself and I just gawked a bit more.

Soon enough I had prepared to warp Bayek to a nearby fast-travel spot. Assassin’s Creed Origins loads when you do that, so I assumed that the boats would reset and all would be corrected. I loaded the game’s map to pick my fast-travel spot and discovered that a glitched airborne boat is glitched and airborne on the map, as well. Neat!

It’s a little hard to make out, but the airborne boat is airborne even in Assassin’s Creed Origins’ map view.

I warped Bayek away. I doubled back. I was now approaching from the west. The sky was clear of boats, but right where the water met the beach, I found a boat that appeared to have been dropped from a high altitude. 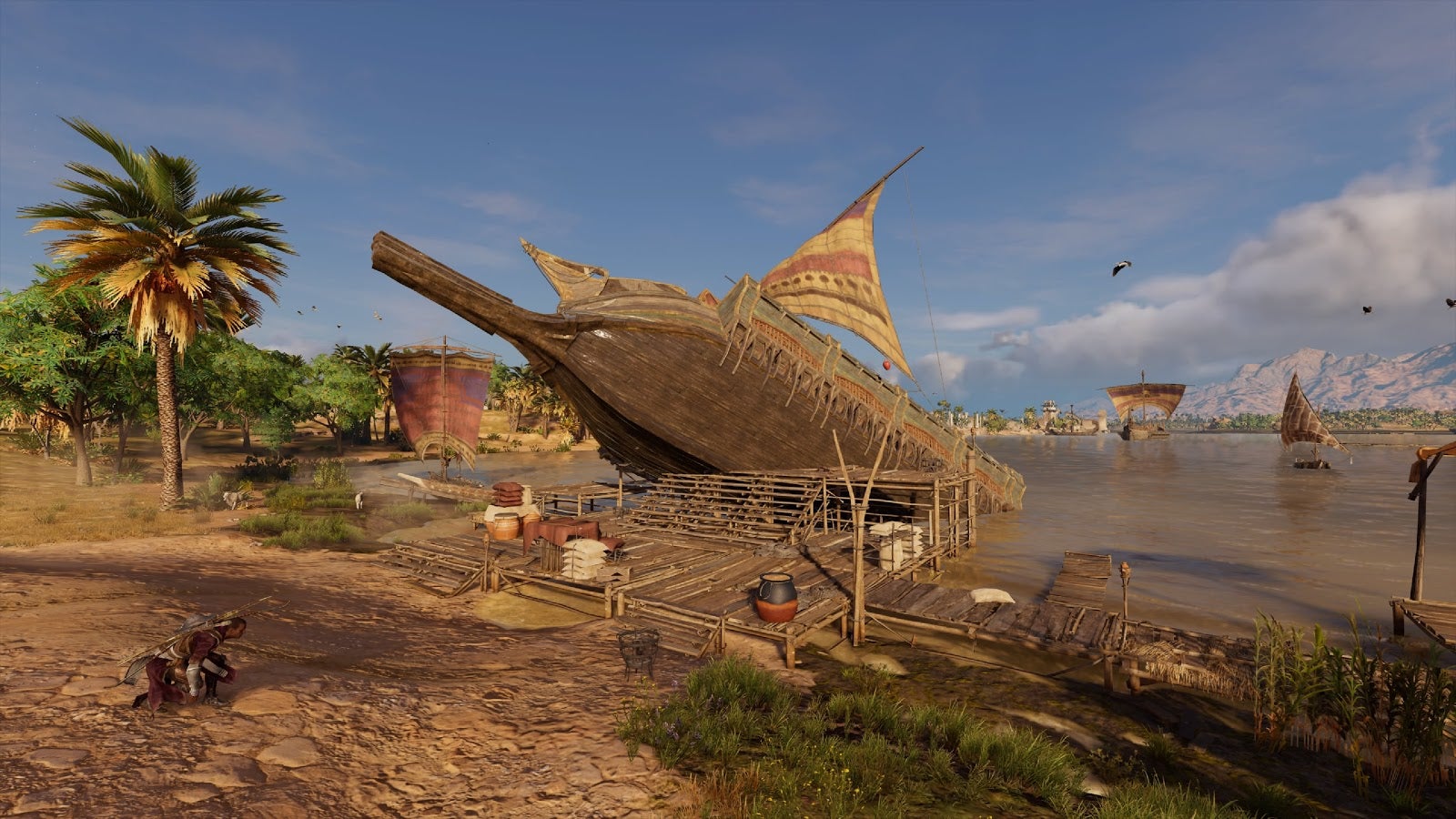 Photo mode is great for showcasing glitches. If only I’d remembered to do this when the boats were dancing in the air.

I didn’t need to climb the boat to do the quest, so I snapped some photos, did the nearby quest and moved on. All good.

On the safari of regularly playing video games, one grand, unintentional glitch a year is sufficient. Too many more would make me worry that my games are breaking. I would, however, love to see more games purposefully adopt the dynamics of a player wandering upon a glorious glitch. It’s an exciting moment, when a game briefly goes on the fritz, and one that’s far more implausible in any other entertainment medium. The imaginative game developers behind decades-old titles like Metal Gear Solid, Eternal Darkness knew this and exploited the potential of a game seeming to break. In the influential Eternal Darkness, for example, the player might suddenly be told their save file was being deleted. It was just a scare meant to convey the lead character’s diminishing sanity. More recently, this kind of thing has popped up in Batman games and Undertale.

Flying boats aside, Assassin’s Creed Origins does occasionally actively appropriate the excitement of a game coming undone. When Bayek travels under the desert sun for too long, weird things begin to happen. You start to hear odd noises. Strange people show up. An oasis appears, then fades. You’ll even get an achievement if you’re lucky enough to have Bayek get pelted with a rainfall of bugs:

Of course, we all want the games we’re playing to work. We don’t want them to break. We don’t want technical issues to cost us progress or otherwise spoil our fun. We don’t even want to see that many flying boats. It can be exciting, though, when, intentionally or not, our games go just a little haywire.