A post on the Ministry of Defence of the Russian Federation’s Facebook page earlier today purported to show photographic proof that the US was aiding ISIS fighters in Syria. It turns out that one of the photographs included was from a video game.

According to the post, Russian air power was used to help Syrian troops take back the town of Abu Kamal from ISIS control. During the operation, the Ministry of Defence claimed it had learned US aircrafts were trying to provide cover for an ISIS convoy. Part of the “irrefutable proof” included in the Facebook post was actually an image from a promotional video for a mobile game called AC-130 Gunship Simulator: Special Ops Squadron. 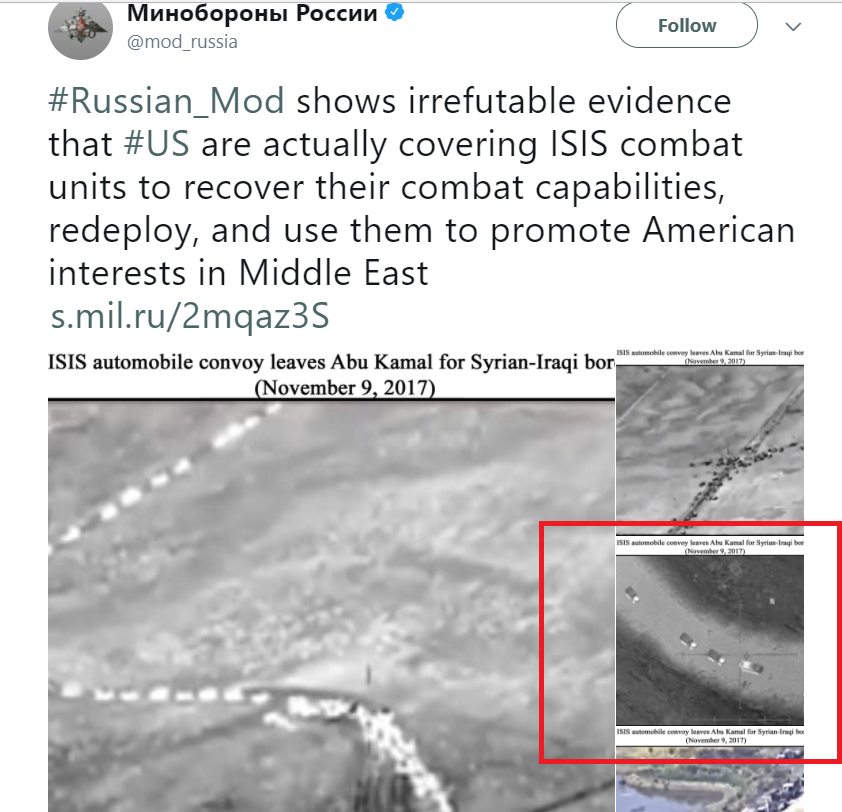 A message in the top right corner of the video reads “Development footage. This is a work in progress. All content is subject to change.” The screencap used by the Defence Ministry failed to clip out the “all content” part.

The propaganda’s connection to the two-year old game was discovered by people on Twitter and laid out in a post by researcher Eliot Higgans, currently a visiting scholar at King’s College. Another of the images used was taken from an existing Iraqi Ministry of Defense video. Russia’s Defence Ministry has since taken the images out of its Facebook post and deleted the tweet they were included in. Of course, their inclusion in the first place casts doubt on the rest of the agency’s claims and “evidence” as well.

AC-130 Gunship Simulator: Special Ops Squadron tasks players with providing air support to troops on the ground during the Vietnam War. It’s not a very well-known mobile game, and the studio behind it, Byte Conveyor, hasn’t updated its Facebook page since December of 2015. The graphics certainly look realistic, though.

In addition to being a terrible tragedy for the people of Syria, the Syrian civil war has also been used by both the US and Russia to try to increase their influence in the war-torn region. While the US allegedly stopped its programme of covertly arming terrorists in Syria last July, the country still maintains a troop presence there, much to the anger and frustration of Russia and the regime of Syrian president Bashar al-Assad. It was only last May that US-led forces hit a pro-Assad convoy. Propaganda on social media has been a consistent tool of Russia’s in that ongoing power struggle.

For all of the hostile actions committed by the US in that country, however, shielding ISIS convoys using AC-130 Gunship Simulator: Special Ops Squadron does not appear to be one of them.