Call of Duty has recently gotten lost in a future of jetpack boosting, robots, and wacky laser guns, leaving the franchise feeling almost unrecognisable. Sledgehammer Games’ latest entry in the long-running war shooter series, Call of Duty: WWII, sends the game back to basic training in more ways than just a simple rewinding of time.

Yes, the World War II setting certainly helps that along, but also the fact that the multiplayer is more balanced and less chaotic than it was in the jetpacks-and-outer-space era. And the Zombies mode is less cartoony and more likely to incite some screams. It’s classic Call of Duty—even if the game obviously borrows some ideas from Activision Blizzard’s other shooters Overwatch and Destiny.

Call of Duty: WWII’s single-player campaign centers on the European theater from 1944 to 1945, focusing on historical accuracy and brotherhood. The campaign puts you in the shoes of Private Ronald “Red” Daniels, a good ol’ boy from Texas. You’ll bond with the soldiers in your platoon during a gory push towards Germany, starting by storming the beaches of Normandy on D-Day and fighting all the way to the Rhine. While most players will by now have seen some cinematic variation of World War II, Red’s story is unique enough to engage you in a campaign filled with very familiar surroundings. 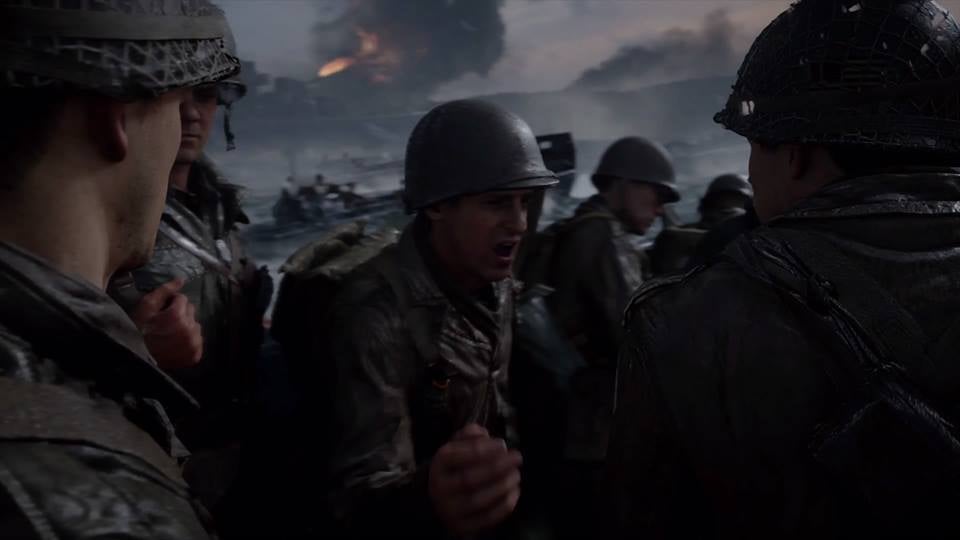 The brotherhood elements of the story carry into the game mechanics, as Red relies on each member of the squad for a different kind of support. You can request squad mates to provide ammo, health kits, resupply your grenades, highlight enemies, or signal smoke to call in mortar strikes. Your health won’t auto-regenerate as it does in recent Call of Duty campaigns, so you’ll be asking for health packs throughout the trek across Europe.

It’s great to see your AI squad be useful with supplies and recon, especially because they’re absolutely terrible at killing Nazis. More than once, one of my squadmates pushed forward to the point where he was standing right next to the Nazi that was shooting at me, and the two studiously ignored each other. But, hey, you’ll likely get a health pack or some ammo from your pal, if you survive!

Each mission has one or more Heroic Actions, which are optional objectives where you have the power of choice in the heat of the battle, saving soldiers or allowing your enemies to surrender. You might be desperately pushing through the dense forest of the Ardennes and hear a fellow soldier scream for help. Do you stop and assist the wounded soldier or keep your pace? Throughout the game, you’ll also have several opportunities to help soldiers by dragging them safely behind cover.

Sometimes you’ll push through locations where you can choose to let enemies surrender or just kill them anyway. Sledgehammer Games did implement some moral code here, because you can’t turn around and kill them after they’ve surrendered—attempting to kill surrendering Nazis will restart you at the checkpoint. 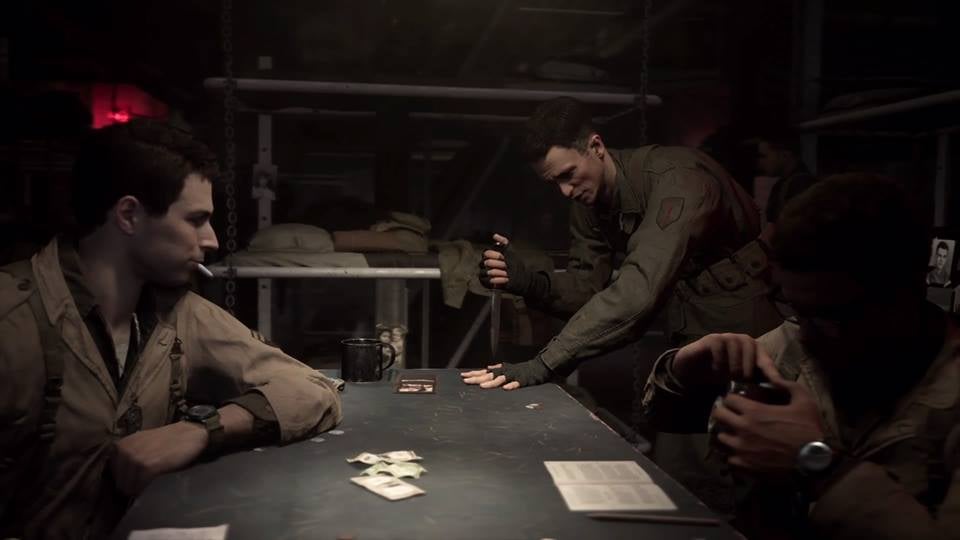 Overall, I think the Heroic objectives are a nice touch, but I found several soldiers died while I was trying to help them. You have to act fast before the game makes you feel horrible for taking too long, but it’s your choice whether you want to help at all. Red is, after all, a good ol’ boy, so I felt that it was in character for him to save as many souls as we could. These small touches and the beautiful yet war-torn surroundings keep you engrossed, giving the game’s events some real emotional impact.

WWII does, if briefly, touch some topics such as segregated squads and the absolute horror of the Holocaust and concentration camps, but mostly those subjects are tiptoed around. There was often the tense tug and pull of moral debates among the soldiers, questions of showing mercy or whether they should risk the mission to save civilians. I would’ve liked more history lessons packed in, but neither did I ever feel like I was just mindlessly killing enemies for fun. There was always enough context to remind me: holy shit, this was real.

Overall, the campaign is about six hours of solid gameplay, and eleven missions will get you from D-Day to The Rhine. (The story doesn’t touch on Japan, or the atom bomb, or anything outside of your journey from France to Germany.) The story still carries all the typical Call of Duty set pieces such as over-the-top driving sequences, a flight mission, and stealth, but there are several moments that deliver more emotion than we’ve seen in recent installments. For me, this was the most emotionally invested I’ve been in a Call of Duty campaign since Black Ops I.

When you first jump into WWII multiplayer, it might feel a lot different than previous installments. The game immediately drops you into a new social space called Headquarters, in which you can find a number of activities to kill time with until you party up with friends or load into a match. This is basically a Destiny-like hub where you can open Supply Drops, pick up multiplayer challenges for extra rewards, duel in a 1v1 pit, and more. 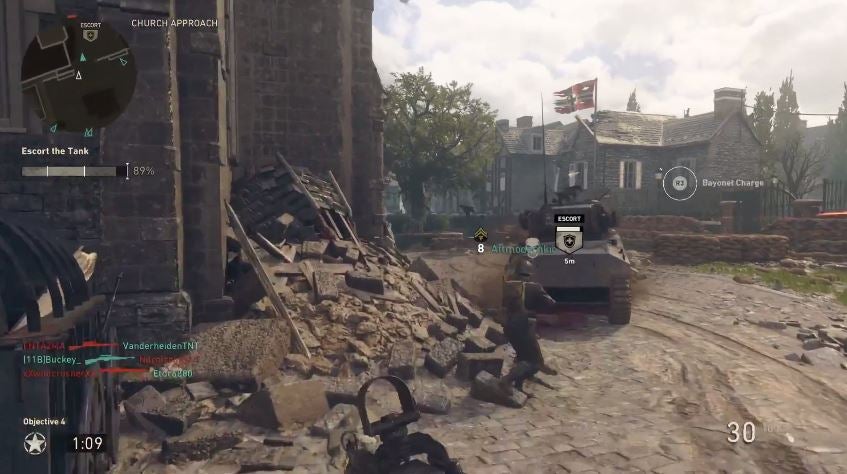 But once you get acclimated to HQ, and the ways that Sledgehammer Games has completely revamped the Create-a-Class and perk system, this is classic Call of Duty gameplay at its core.

Instead of Create-a-Class, where players can select their preferred gun and perks of their choosing, players now enlist into one of five Divisions that each come with a set of unique skills. Infantry is a great starting place, skilled at mid- to long-range combat. This gives you a bayonet charge and the choice to have an extra attachment. Airborne is all about stealthy run-and-gun gameplay, with the option to add and remove a suppressor attachment during the match. The Armoured Division is for players who love toting light machine guns and launchers, also giving them the option to use a bipod to post up and really do some damage. Mountain Division caters to snipers, and Expeditionary is for those who love close-quarters shotgun chaos.

Despite these tailored divisions, you aren’t limited in your gun choice. You don’t have to equip a sniper rifle to your weapon loadout for Mountain, but then again, it wouldn’t really be making use of the unique benefits of the division if you had a shotgun equipped. With that being said, you also aren’t limited to just one division. You can unlock more as you play, and end up with a loadout prepped for each, giving you the freedom to change up your playstyle in the middle of a match.

The new War mode is definitely the most unique game type you’ll find in the multiplayer, with a focus on team-based, objective play. Come prepared to communicate as one team serves as the Axis side and the other the Allies, fighting in a series of attack and defend objectives. There are three maps exclusive to War, but Operation Neptune definitely stands out as players have the opportunity to either storm or defend the beach on D-Day. It’s like reliving the intense opening moments of the campaign with your friends.

Other than War, WWII offers pretty much the standard mix of game modes. Even Uplink, the game of “jetpack basketball” present in the recent future-warfare games, is represented here with a boots-on-the-ground version called Gridiron. Not only does this feel like Call of Duty American football, but you'll even hear shouts of familiar terms such as out of bounds, fumble, and other football jargon as your team runs and passes a ball towards your opposition’s goal. Gridiron even has a similar scoring system: You carry the ball into the goal for 7 or throw it for 3, instead of the 1 and 2 point system used for Uplink.

The series’ now-iconic Final Kill Cam has been replaced with an Overwatch-esque Bronze Star Play, which in this case just feels like a randomly chosen kill from the match. Search & Destroy mode still seems to hold true to the final kill of the match being displayed for the Bronze Star, but in other game modes, the Bronze Star Play never seemed that impressive, unlike the “Play of the Game” in that other shooter. Through a weekend of multiplayer matches, I witnessed many nice triple or quad kills, but the Bronze Star Play always showed just a basic single or maybe a double kill.

For now, WWII’s great game design is being hindered by technical issues. No launch is without some hiccups, but the server issues currently plaguing Call of Duty: WWII are pretty horrendous. The game is so much fun when it’s up and running, but playing is frustrating with an abundance of server issues and awkwardly long load times.

Zombies mode also returned for the fourth year in a row. Over the years, Zombies mode has featured celebrity guests such as Sarah Michelle Gellar, George Romero, and Pam Grier, and Sledgehammer Games keeps up the star-studded cast in the first map The Final Reich. Katheryn Winnick (Vikings) leads the group alongside David Tennant (Doctor Who), Elodie Yung (Daredevil) and Ving Rhames (Mission Impossible).

The group is attempting to recover priceless works of art stolen by the Axis powers, but they arrive at a tiny village in Mittelburg, Germany to find the area is filled with sewers of blood and horrific undead. Seriously, this place is super creepy and gross. 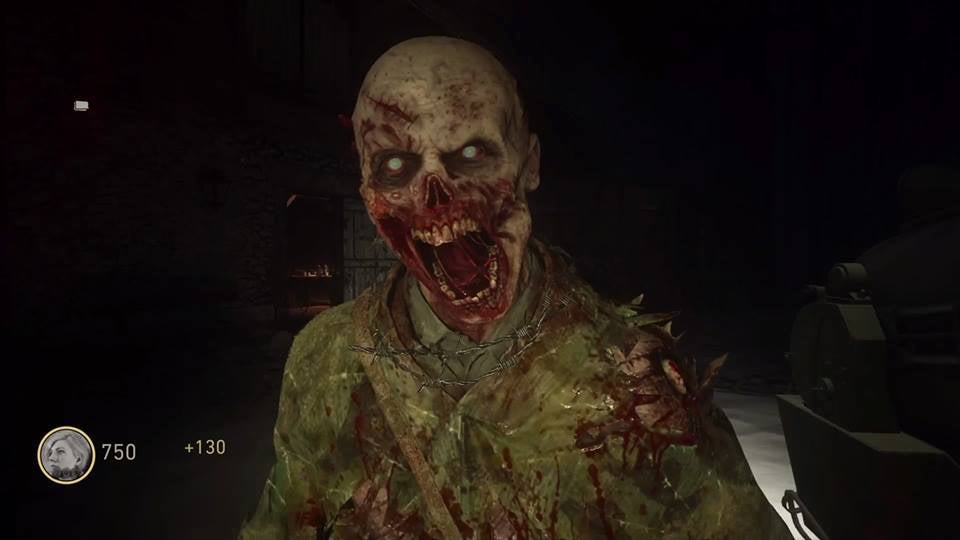 One cool factor is that Zombies finally lets you pick your character. Of course, there can only be one of each character, so it’s up to you to fight for your favorites. You can also pick from one of four roles to play: Offense, Medic, Support and Control. Each role gives you temporary abilities with cooldowns. I enjoy Medic because I can save my ability for when a teammate is down or use when I’m trapped in a sticky situation, becoming invisible to the zombies long enough to revive my friend or get to safety.

Another nice addition to Zombies is a playable story prologue. This is only available when playing solo, but it gives a nice introduction to the characters and provides a basic tutorial for new players. I recommend trying the prologue even if you’re a veteran player as the tiny map can be used as a “starting room” challenge: You can try to survive as many rounds as possible before triggering the end of the tutorial.

If you’re familiar with Zombies mode, most of the mechanics will feel the same with a few minor changes. The currency used to buy guns, perks, and traps is now called Jolts instead of points or dollars, and you can no longer repair broken windows for extra points. However, you can drop some of your Jolt currency for teammates to pick up, so you can help each other stay stocked with the best guns and plenty of ammo.

The Final Reich provides even more horror than the original World at War Nazi Zombies mode. There’s plenty of gore and undead terrors, and the jump scares don’t seem to get old. WWII Zombies is a drastic change from Infinite Warfare’s lighthearted zombies, clowns, and aliens, and it’s a lot of fun to play.

Sledgehammer Games has delivered a polished experience across all areas of Call of Duty: WWII, showing us exactly what a classic Call of Duty game should look and feel like in 2017. This entry shouldn’t disappoint fans, whether their preference is campaign, multiplayer, or zombies, assuming that Sledgehammer promptly fixes the server issues.