The warm sun beats down on a main street in Wolfenstein 2: The New Colossus, just in time for the Victory Day parade. Uniformed SS march down swastika-filled streets to thunderous applause. By the old diner, two members of the Ku Klux Klan practice their German. Everyone is white and happy. And it is so fucked up.

Wolfenstein 2 is set in a world where the Nazis won World War II. In 2014’s Wolfenstein: The New Order, protagonist William “BJ” Blazkowicz is injured during a mission against a Nazi scientist near the end of the war and spends 14 years in a coma. He wakes up in the Nazi-conquered present of 1960 and eventually strikes back at the scientist he failed to kill during the war. Wolfenstein 2: The New Colossus picks up right where the previous title left off, with BJ bleeding out. Awakening five months later, he continues his crusade against the Nazis, joining with resistance groups in America to start a revolution. 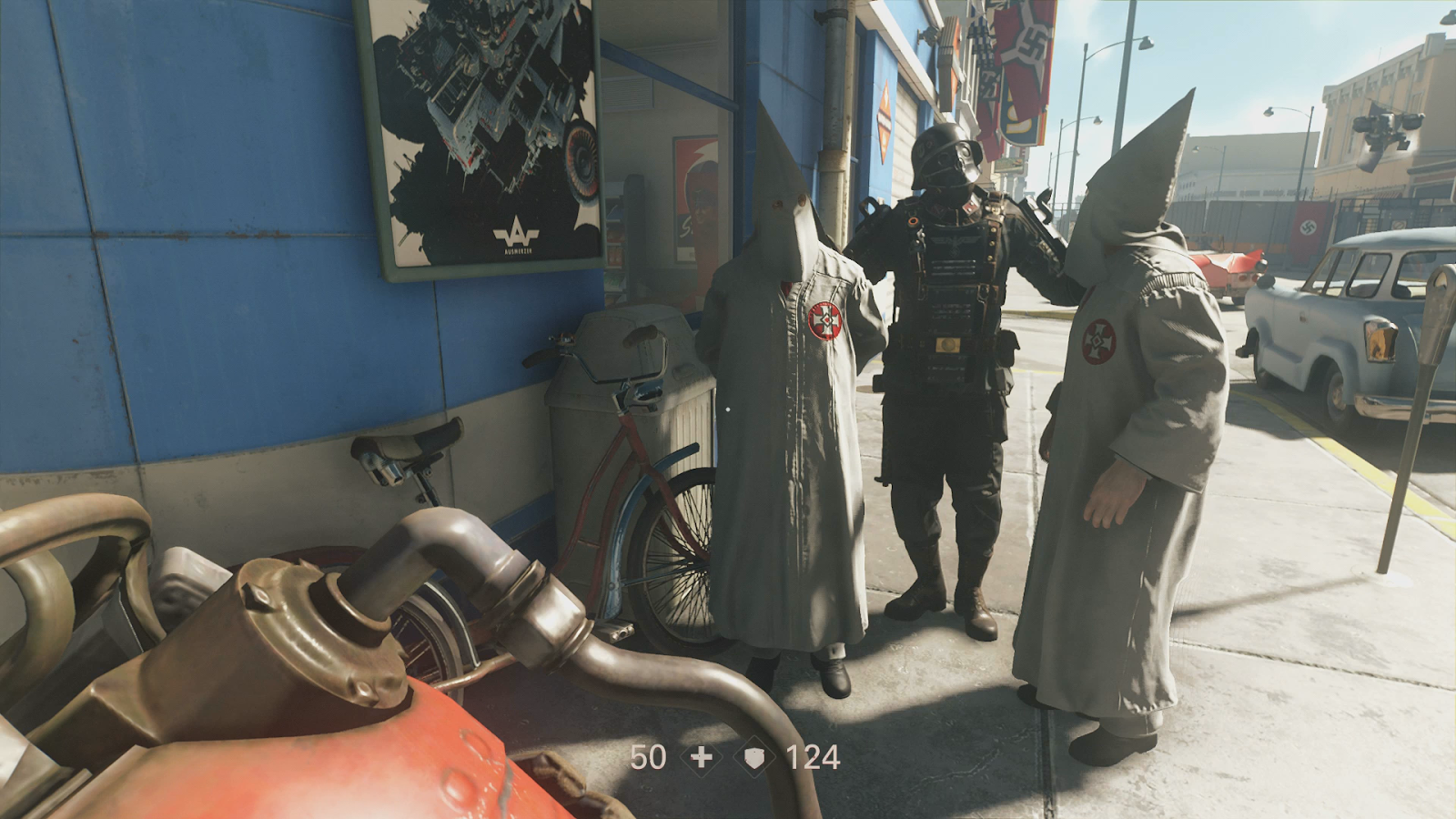 Weaving together scenes of rural Americana and dystopian fascism, The New Colossus’ world is nightmarish. A memorable stroll through suburban New Mexico streets features Nazis side by side with the Ku Klux Klan, while a sojourn into New York, long since irradiated from a Nazi atom bomb, is evocative and dark. The most terrifying aspect of America is just how much the populus has embraced their new overlords, spewing forth nationalist rhetoric and supplicating to the Reich. The world has fully embraced the Nazis, and it’ll take a huge kick in the teeth to knock them out of it. Which is where the gunplay comes in.

The New Colossus plays best when it is angry. While BJ is fragile and can be taken down with a few shots , he has a great deal of mobility and a diverse arsenal for killing Nazis. Machine pistols and assault rifles spew forth bullets with reckless abandon while powerful laser weapons burn enemies to skeletal dust. The New Colossus liberally hands out ammunition and plenty of foes to use it on. The gunplay shares a similar rhythm to 2016’s Doom, punctuating the shooting with gruesome melee kills, though it never quite hits the same confident stride. BJ slides, leaps, blasts, and hacks off limbs with a responsiveness that reduces Nazis into little more than bloody pinatas fit to burst at the next shotgun blast. “Terror Billy” earns his name.

1981’s Castle Wolfenstein placed an emphasis on stealth and disguise that the series has never managed to completely replicate. The New Order successfully implemented sneaking segments with diverging paths and key assassination targets. They were occasionally prone to breaking down as enemies discovered the player, but many of them could be cleared with nothing but a knife and some grit. The New Colossus keeps these segments but lacks the varied level design that helped them shine so much in The New Order. Many of the game’s spaces are claustrophobic and tight; they offer limited pathways and unpredictable enemy patrols. When everything works, stealth sequences are a brutal display of guerilla warfare but those moments are rare. Players are far more likely to stumble into an alert and trigger a massive gunfight.

In the second half of the game, BJ gains access to numerous Nazi combat rigs that dramatically alter both gunfights and exploration. The player can choose from one of three tools, though the other two can be found in the game. Instantly deployable stilts create new angles of attack and boost players to balconies. A constriction rig allows BJ to slide into small crevices and sneak around the battlefield like a Nazi-killing Ant-Man. Massive charging armour can be used to bowl enemies over like pins or bash through weak walls. The rigs dramatically change the game, expanding level exploration to match immersive sims like Deus Ex or Dishonored. The New Colossus’ levels dance a thin line between self-contained arenas and a larger open world, and the introduction of these new upgrades allow creative approaches to problems that were previously tackled with less finesse.

The New Colossus manages to get a great deal of mileage from only a few key locations thanks to a loose mission structure. While the majority of the game focuses on moving from one plot point to the next, BJ can also carry out requests for side characters in missions or at home base. By collecting Enigma Cards from downed Nazi commanders, BJ can use the base’s Enigma machine to unlock extra assassination missions. These side missions lend a grander sense of gravity to the game. BJ is part of an insurgency fighting a massive occupying force, and thinning the Nazi ranks is hard work. These missions can be played at any time once the Enigma Machine is unlocked, and it’s likely only the most determined players will complete these extra tasks.

The New Colossus strikes a balance between high action pulp and self-reflection. The narrative tackles heavy thematic concerns while still finding time for cheesy dialogue and offbeat humour. In spite of Bethesda’s insistence that the game in not meant as specific political commentary, The New Colossus has a lot to say about the nature of violence and autocratic power. The resistance is a diverse band of socialists, ex-Army jarheads, black liberationists and civil rights activists, exiled Jews, and anarchists banding together against the fascist regime. BJ’s all-American patriotism lives side by side with Christian liberation rhetoric and anti-capitalism. Whereas the Nazis strive for a monolith of identity and ideology, the resistance is intersectional and energetic.

There is no ignoring the context of The New Colossus’ release. Fascism and nationalist violence is on the rise across the world. As I finished The New Colossus this weekend, Nazis and other white nationalist groups marched across Tennessee. A group of them entered a local pub and attacked a biracial couple. The Nazis in The New Colossus are broad caricatures, dark armoured soldiers with robotic dog-tanks and deadly laser cannons. But the underlying truth of the Nazis, the hate festering in their hearts, endures to this day. The New Colossus examines this hatred through its pulp storytelling and bloody gunplay, as well as in the toll the resistance takes on its cast. This is a game that wants to show players all the things that can be done with a hatchet and some Nazis but also wants to understand why someone would take up the hatchet to begin with.

Nowhere is this more clear than with BJ himself. The game’s opening focuses on his broken home life in great detail. While he spends most of the game shooting Nazis, BJ also struggles to understand his past and finds just as much racism and hatred in his upbringing as within the halls of the Reich’s power. While The New Colossus has plenty of exciting gunfights, they grow bittersweet as we see the human and emotional toll the mere act of existence takes on BJ. He is trapped in a cycle, thrust into a life of violence by a cruel father and driven deeper and deeper into depravity by the unchecked cruelty of his oppressors.

In spite of this, The New Colossus is not joyless. The game balances its protagonist’s internal struggles and broader examinations of violence with some wonderful sci-fi schlock. There are psychedelic drug trips, a Frakenstein’d cat with the body of squirrel monkey, flying saucers, and more. This wackiness mixes with personal moments: birthday parties, nervously-composed love letters, and long conversations about which boy band member is the cutest. The New Colossus is violent and stark, but it also manages to be funny and human. Every new scene offers fresh surprises.

The New Colossus’ greatest trick is its malleability. At any given moment, the game transforms to provide new experiences. Gameplay ebbs and flows between stealth and action, ramping up tension with new abilities and weapons. It is an old-school action game, a tense stealth experience, and an immersive sim all at once. The story moves from pure sci-fi camp to dark and pained trauma but always manages to make each moment feel equally believable. Wolfenstein is a chameleon befitting its lineage. The Apple II games were subtle and grounded; id Software’s classic 1992 shooter was fast and bloody. The New Colossus is both of these things and more, moving from moment to moment with confidence.

The New Colossus crafts a world that can deliver exciting action and human drama. The messy gunfights give way to something much larger. The New Colossus examines violence, resistance, and the necessity of revolution. It’s bloody and occasionally silly but never stupid or crass. It comes down firmly on the side of punching Nazis and throwing bricks, concluding that such resistance isn’t just cathartic but essential.