Last night, I finished a playthrough of Binary Domain on Kotaku’s Twitch channel. The 2012 sci-fi shooter is rough around the edges but creates meaningful, intelligent interactions between players and their AI companions.

Binary Domain is a 2012 action shooter by Sega. A special forces team is sent into Japan to investigate a corporation that has created human-like robots called Hollow Children. The team, called a “Rust Crew,” is joined by a French robot named Cain, and a late game twist reveals that one of the team members is not entirely human. Using a trust system and voice recognition, the game expresses its thesis in gameplay: humanity is something more than the flesh.

Players take the role of Dan Marshall, an American member of the team, and build trust with non-player characters through a combination of actions taken in firefights and responses to dialog prompts. Superior performance such as skilled headshots and well-tossed grenades can build unit cohesion, but it’s built in quieter moments as well. When teammate Faye Lee suggests that Dan must not care about fashion, players can respond in the affirmative. They might tell their teammate Charlie that they also enjoy reading or take time to acknowledge Cain’s regret at the loss of his comrade Jean. These interactions can be done through button prompts, but the game also features a voice recognition system that allows players to answer squadmates’ questions through an exhaustive list of voice responses. This system is where Binary Domain embraces a transhumanist perspective.

Whether the player is talking to one of their human teammates or responding to Cain, the interactions are functionally identical. Trust is built through the same behaviours; you save characters on the battlefield or you empathise with each character, engaging with them as individuals. It doesn’t matter whether or not they are composed of flesh and blood or gears and metal. While Dan struggles to get over his hatred of “scrap-heads,” a feeling many of his teammates share, the gameplay speaks loud and clear. Cain is just as valid as any member of the Rust Crew.

This dynamic is further expressed after the game’s central plot twist that Hollow Children are technically advanced enough to bear children. None of the main characters are Hollow Children, but Faye Lee is one of their offspring. This revelation divides the Rust Crew, as throughout the game Dan and Faye have developed a romantic bond. In a climactic battle against dangerous robots and Faye, players are able to talk with Faye. The list of recognised voice commands includes a particular stand-out: 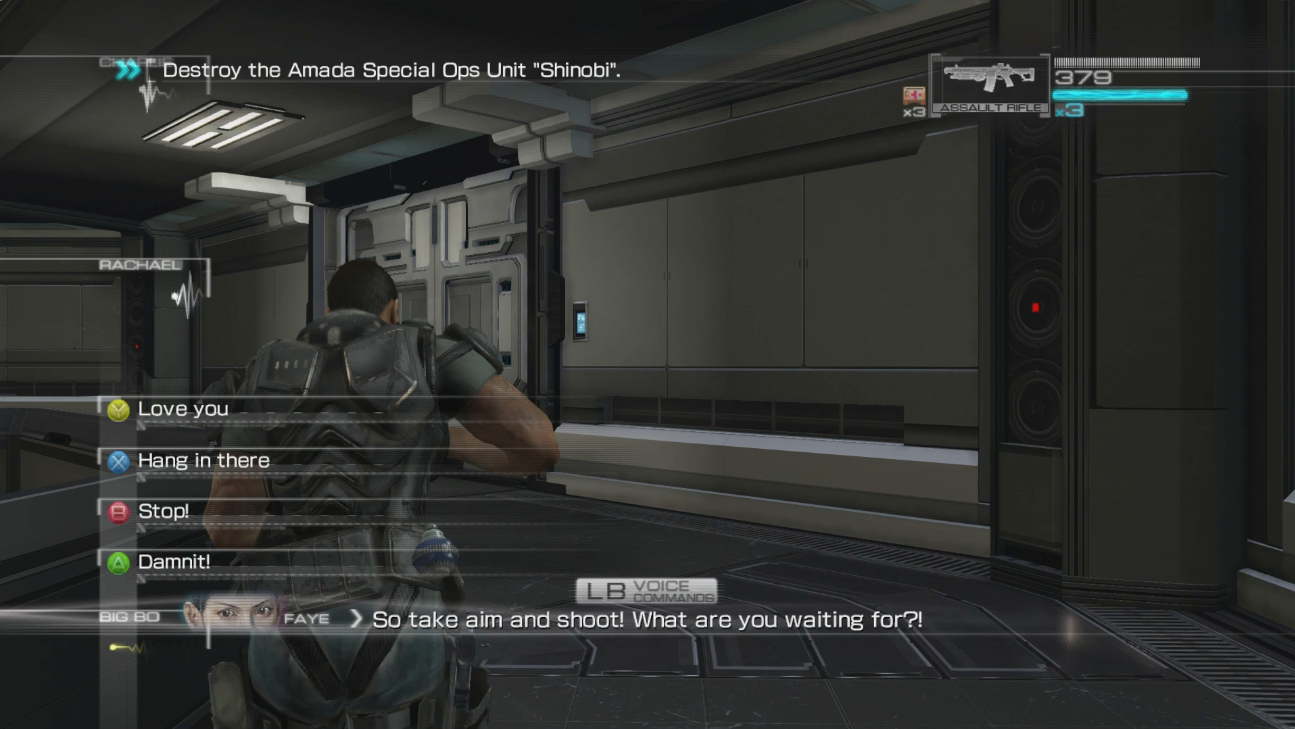 It is assumed that, be it through a genuine sense of empathy or a desire to act out Dan’s character, players would consider telling Faye they love her. What makes this moment resonant is not merely the emotional content of the narrative, but also the fact that players are speaking to an AI character. Binary Domain’s squadmates are not real people playing the game alongside you. Someone wrote their dialog, and another person implemented it. Another designer likely spent hours ensuring that the voice recognition could pick up specific words. Whether it is Faye or Cain or any of the human squadmates, the reality is that they are just NPCs inside a video game.

And yet, we talk to them and care for them. We protect them in battle and, in the heat of the moment, may even shout out that we love them.

When Rust Crew commander Charles Gregory protests that Faye is not human and that her existence is not life, she responds with a simple question: “It feels like life, Charlie, who are you to say it isn’t?”

Binary Domain has already answered that question. It has spent the entire game training the player to side with Faye’s perspective. The game’s systems never treat her differently, nor do they draw a separation between Cain and the rest of the squad. If you’re part of the team, you’re part of the team. It’s just that simple.