Brawlhalla is a rebellious platform fighter born of a genre dominated by exactly one game. Unlike that game, it didn’t have 15 years of loveable Nintendo characters to work with, or four iterations’ worth of fans. Instead, Brawlhalla is weird. It’s got a fighter made out of the stars and galaxies of space who fights with a rocket lance, and a mode specifically for throwing snowballs. It’s a serious fighting game for the platform brawler fans who want something fresh and, simultaneously, a crisp and welcoming introduction for gamers who haven’t yet dipped their toes into the genre.

Out today, Brawlhalla is a wickedly fun platform brawler with moxie. It’s free-to-play, so for zero pounds, anyone with Steam or a PS4 can compete locally or online with a rotating roster of six free characters. More characters can be unlocked by earning coins, which are doled out at the end of matches and after completing daily missions. For £16, players receive all 34 characters—referred to as legends—and every future legend, too. Brawlhalla has been in early access for over three years, during which its developers, AAA studio refugees, sharpened its competitive potential with the help of Smash Bros. fans. 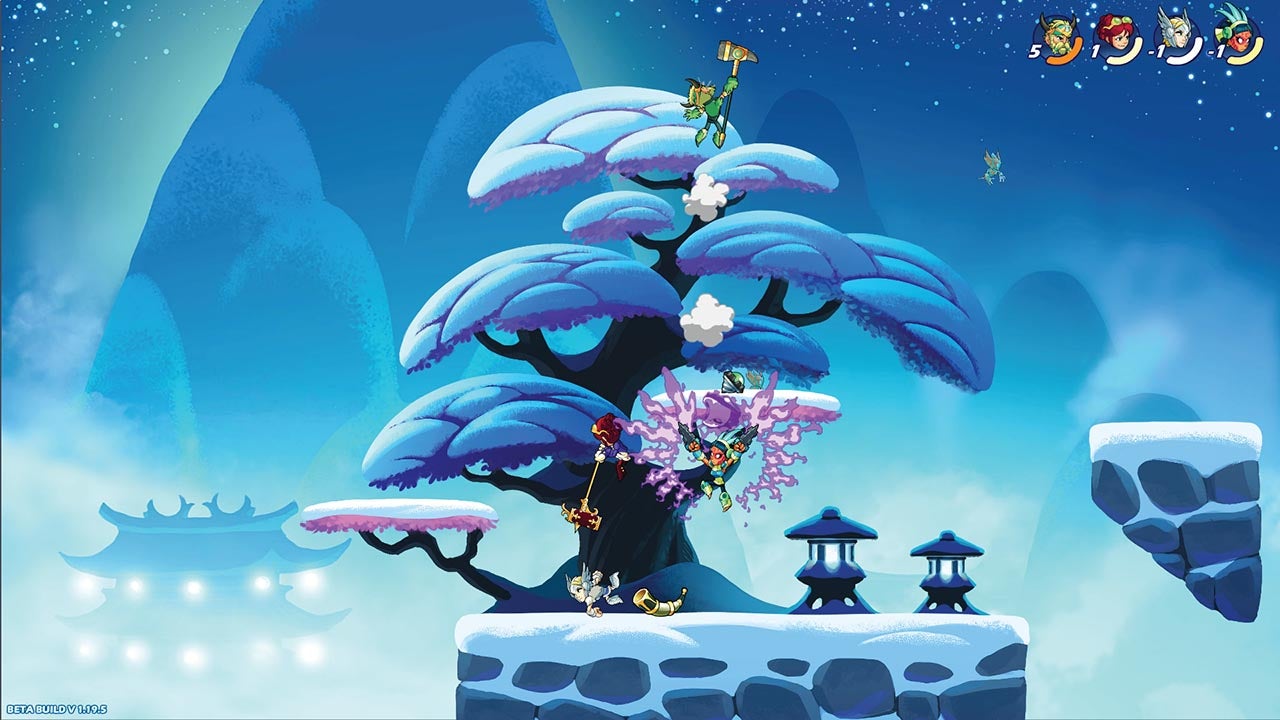 Brawlhalla’s fighters are all free-form, silly takes on character types across all media. On the game’s roster of fighters, there’s the freelance reaper girl Nix, who can rip open a portal and summon an army of souls. There’s the big-chinned Arthurian knight Sir Roland, who fights with a rocket lance. There’s a fox spirit straight out of some anime and Cross, a 1950s New York mobster. The variation is completely absurd. Its developers just sort of picked their favorite archetypes—Mayan witches, ninjas, and added more legends every few months until the roster ballooned.

Anyone who’s played a game or two of Super Smash Bros. will have the muscle memory for Brawlhalla. Players choose a legend and fight to knock each other off a stage, which is easier when a legend is more beat up. Legends can use light or heavy attacks. They can also dodge and dash. Knocking a legend off-stage earns players two points, while getting knocked out decks one. In the game’s main mode, the last legend standing wins, and whoever is depleted to zero loses. In another popular mode, whoever has the most points when the clock runs out wins. The mode I can’t get enough of is 1 vs. 1 “Strikeout,” in which I choose a new legend for each stock.

The modifications Brawlhalla made to the genre of platform fighters are effective and crowd-pleasing. Legends fight with weapons which fall from the sky. Each legend has two weapon modes—so, for example, Sir Roland fights with a rocket lance or a sword while Nix wields a scythe and a blaster gun. No two legends have the same weapon combination, but proficiency with Sir Arthur will ease players into any other rocket lance legend. That means, in a sense, that legends aren’t really characters outside of their extreme aesthetic differences—they’re sets of stats and weapon combinations. A dozen hours in, I’m still a voracious player despite the static movesets that come with fixed weapons. The weapon-forward design of Brawlhalla helps the game feel balanced. Outside of weapons, items are spartan: bombs, spike balls, mines, which can be thrown to trip-up opponents.

Brawlhalla’s best innovations to the platform brawler are its jumps and wall movements. Three jumps and nearly unlimited wall scaling make for fresh strategies. The buff in mobility means a lot of the high-adrenaline action happens off-stage, which, in Smash Bros., is a style of play reserved for more experienced players. Here, anybody can spike their enemy into the abyss, which makes for satisfying and daring off-stage pursuits nearly every game. At PAX East, a developer referred to this as “Super Saiyan combat offstage.”

With insane legend designs, no focus on combos and no advanced tech, Brawlhalla feels scrappy and rebellious. I have not encountered a tier of play that felt game-breaking. There’s a constant tension between serious and silly play, between no items vs. items, stock vs. timed matches, stages with bells, horns and whistles vs. barebones stages. Brawlhalla is a buffet plate. Its stages are pretty streamlined, but a few items drop throughout matches; the most common way of playing is a combination of stock and time. It’s balanced, fair and designed with tight combat mechanics and good-feeling jumps and dodges.

Matchmaking is swift and, if an opponent leaves, a well-trained AI quickly replaces them. I’m matched against both free-to-play players and experienced ones who purchased the game, which introduced new legends and styles of play to me, whetting my palate for more diverse competition. The guy who queues up with a decked-out werewolf was, in my experience, generally better than the guy repping the one-colour free-to-play legend of the week. Frankly, I welcomed it. It meant that, instead of getting my ass kicked by players who have trained with the werewolf fighter for three years, I saw my fair share of victories.

From what I’ve seen, there don’t seem to be pay-to-win mechanics, just increased customisability in look and combat. I’ve been playing with two copies, one provided by the publisher with all legends unlocked and another, a clean slate. The free version introduced me to my main, the valkyrie Brynn, and two other great legends, too. It also taught me which weapons I don’t like (damn you, rocket lance). Grinding away to earn coins on the free account can take a while, though: I spent three hours toiling away and I didn’t earn half the total gold cost of an inexpensive new legend. I’d definitely recommend paying for the full game if possible, though both versions are a blast to play.

Gold isn’t the only currency—there’s also Mammoth Coins and glory. Mammoth Coins are where players are going to be bleeding cash. They unlock cosmetics and taunts in the Brawlhalla store. On my unlocked account, I’ve gotten super into customising my favorite legends.The bull Teros’s mecha skin and Brynn’s “Fallen” skin are killer, and in a weird way, give me more ownership out of my brawler experience than I’d ever gotten out of genre. I just wish there were more ways to earn skins.

Brawlhalla is a dynamic take on platform brawler that feels good to play. It’s never going to replace the game that inspired it, but means that there’s another (non-Nintendo) game to play when I invite my friends over to hang on the couch. Also, it means that at long last, I can confidently pull off a spike in a platform brawler.