Let’s get the comparison we have to make out of the way: No, the Genesis Flashback isn’t as amazing as the SNES Classic. But it’s still pretty good, if you like the games.

While Nintendo is setting the world on fire with its 90s nostalgia trip, let’s say your 16-bit desires are more unconventional. Perhaps you enjoy your games with a bit more violence and/or hedgehogs. AtGames has you covered with the Sega Genesis Flashback HD, a £120 all-in-one console to be released 10 November. Besides being full of classic games, this Genesis does what Nintendon’t—it allows you to use your original Genesis cartridges and controllers. This feature is imperfect, but it’s a nice addition when it works.

You may have already heard some not-so-good things about the Genesis Flashback. AtGames sent out review samples in July to various outlets, including Kotaku. As we were putting together our coverage, a spate of unfavourable reviews hit—Gizmodo called it “hot garbage,” for example— citing wonky controllers and laggy gameplay. AtGames recalled the review units, saying they had mistakenly gone out with early, unfinished firmware.

Several weeks later, we received an updated version, on which this review is based. While not every issue with the Flashback HD has been addressed, the major ones have. The controllers work, and the emulation is no longer choppy. That means the system now fulfills its basic promise of letting you play accurate Genesis games on your HDTV. Hooray! 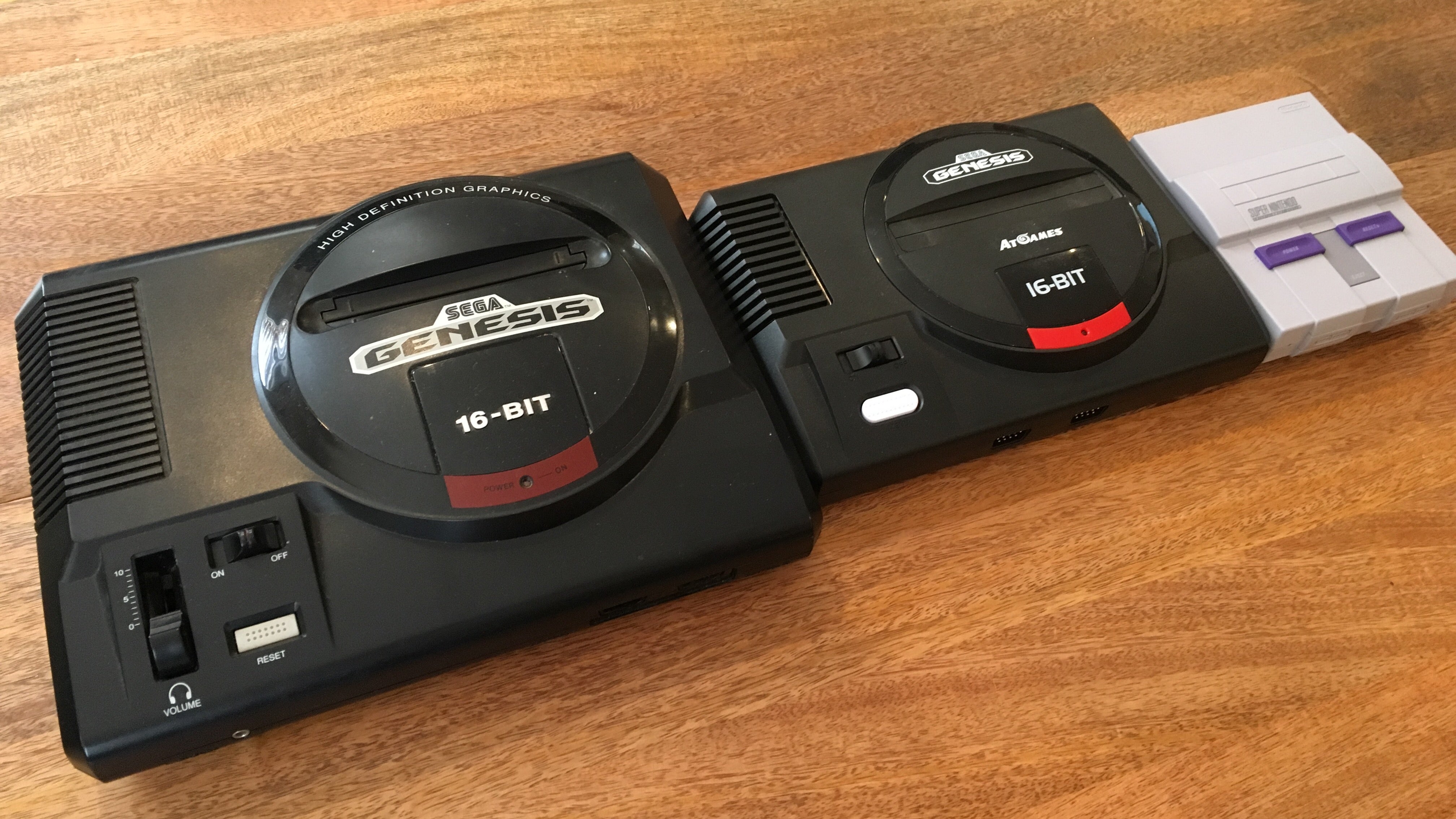 The Sega Genesis Flashback HD is smaller than an actual Genesis, but it’s also bigger than two SNES Classics put together. This is understandable, though, because of the actual functioning cartridge slot, which limits how small this thing could really be while still maintaining the classic Genesis proportions. It has an AC adapter (not USB) and HDMI out.

The unit includes two wireless controllers that each require two AAA batteries (not included). The design of these is based on, if not entirely 1:1 accurate to, the six-button Genesis controller that Sega rolled out around the same time that Street Fighter II came to its hardware. They feel a little light and hollow, but they work fine. A switch on the top of each controller lets you set them to control Player 1 or Player 2.

The Flashback has a Rewind function, although it’s not as elegant as the SNES Classic’s; it simply jumps back six seconds in the game and replays them automatically until you decide to jump in. This is done by pressing a dedicated Rewind button on the wireless controller. The controllers also have a Menu button that lets you bring up a menu overlay during gameplay, from which you can save and load your game in one of ten save slots per game, as well as turn on and off a single rudimentary “scanline filter.” This will also let you quit the game and go back to the system’s main menu without getting up from the couch, which the SNES Classic lacks. 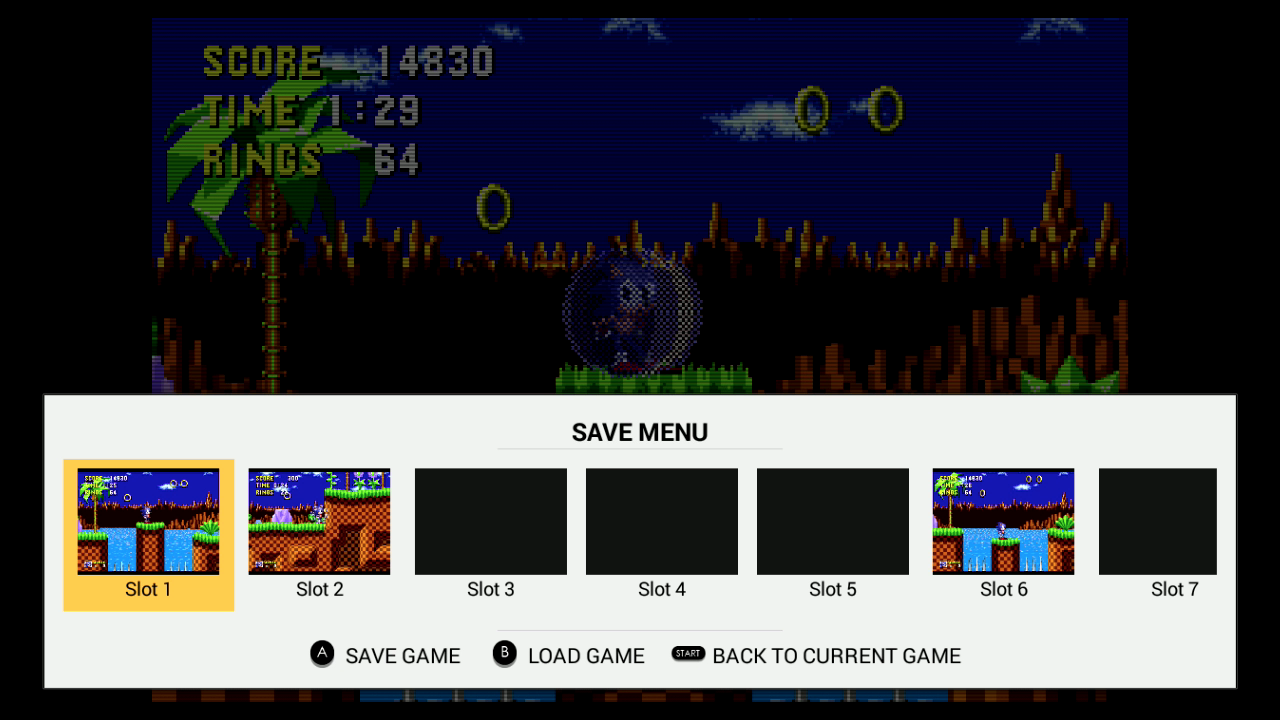 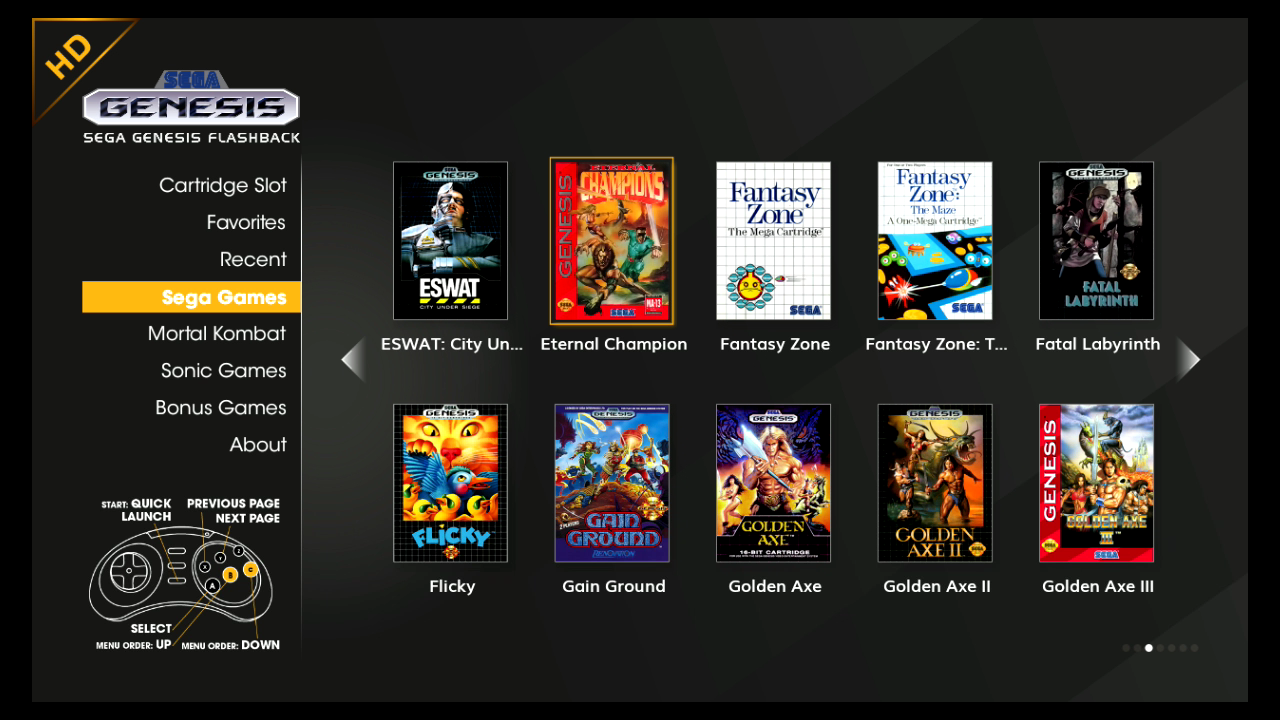 The system’s menu is where things start getting dicey. See the menu screen? Would you imagine that, to begin navigating your way down that menu from “Cartridge Slot” to “Favorites” and “Recent,” you’d press Up and Down on the D-pad? You fool. What you have to do is to press the B and C buttons on the controller. The rest of the menu functions are equally unintuitive, and you’ll likely press the wrong button many times even after days of playing. (Don’t accidentally hit Down on the D-pad when you have the sub-menu open, or you’ll be instantly booted out of a game!)

Flashback does let you play Genesis games off of your original cartridges. When you put a game in the slot and turn the system on, it will download the full game into memory and play it in the same emulator that the built-in games are played on, with all the same features—even save slots. But the compatibility is spotty. I tested it with a wide variety of games, such as:

In general, I found that unlicensed games did not work at all. Most of them simply never “dumped” to the memory when the system turned on, and the “Cartridge Slot” option stayed greyed out on the menu. Pier Solar dumped, but it crashed when I tried to run it.

On the other hand, games from all territories seemed to run just fine as long as they were officially licensed Sega products. The Lion King, Battletoads, and Bubsy all worked, regardless of what territory they were originally released in. The one licensed game that gave me significant issues was Dashin’ Desperadoes, which is a split-screen multiplayer game. The game ran fine up until the split-screen mode started, when everything glitched out. This makes me think the emulator in the Flashback doesn’t know how to handle that graphics mode.

Would I buy a Flashback HD to substitute for a standard Genesis? Absolutely not. The compatibility is far too low. But if you just have a couple of standard, licensed Sega games kicking around the house, you might find this added feature a nice bonus. 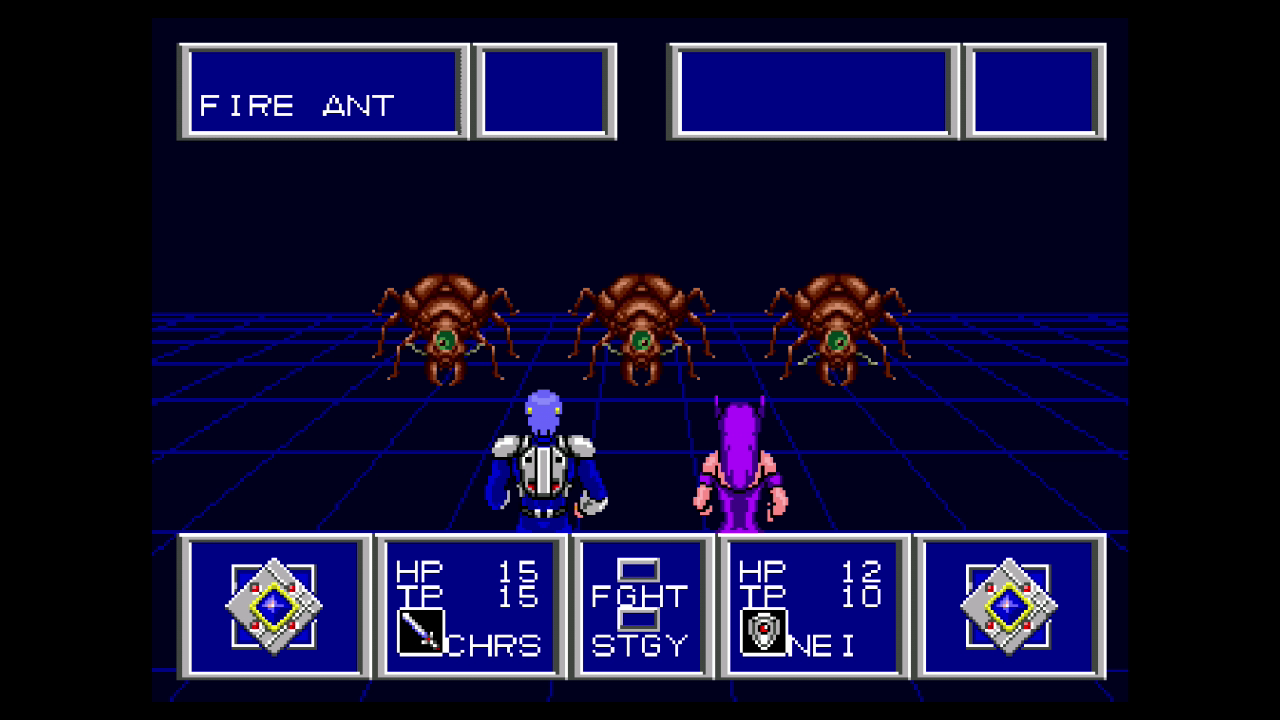 The box for the Sega Genesis Flashback HD says it contains 85 games. This sounds impressive and is legally true. But it does not contain 85 Sega Genesis games. It contains 45 Sega Genesis games, 14 Sega Master System games, 7 Game Gear games, and 19 random pieces of shovelware like Checkers and Air Hockey that you should never, ever play.

So really it contains 66 games made by Sega. That’s more than three times the games on SNES Classic, but where Nintendo selected a very careful balance of the very best games the system had to offer and also Super Ghouls ‘n Ghosts, AtGames’ picks of Genesis software is, shall we say, scattershot.

Here are the actual Sega games:

It’s either feast or famine with this game list. If a certain franchise is represented, they go all the way. If you’re a fan of a certain Mister Sonic T. Hedgehog, you will be very happy. Ditto if you want to dive deep into a Sega RPG series like Shining Force and Phantasy Star, or if you’re one of the last remaining diehard fans of Alex Kidd.

But otherwise, it’s a whole bunch of filler. I could have gone my whole life without playing Crack Down, Psycho Fox, Sword of Vermilion, or any number of other B-tier games on this system. And the Genesis versions of Mortal Kombat were not exactly the pinnacle of arcade-quality perfection, even if the first one did have the “blood code.”

This is not a selection of the best the Genesis had to offer. Gunstar Heroes? The entire Streets of Rage series? Castlevania: Bloodlines? MUSHA? Splatterhouse? I’m literally just looking at the list of games already released on Virtual Console. Perhaps AtGames is limited in what it is allowed to put on the system, but Sega should be at least a little embarrassed by this. It would be great to see the two companies get together and produce something that’s actually reflective of the very best games on the platform. The Sega Genesis Flashback HD has an irritating menu system and a haphazard selection of games. But it plays the games it does have accurately and pleasantly, which is a big step up for AtGames. Its previous Genesis hardware used far cheaper solutions, which caused the graphics and especially the sound to be notoriously terrible. This is not those products, thankfully. (Don’t accidentally buy that if you’re looking for this!)

I’d imagine a lot of Genesis fans will be disappointed that their favourites aren’t on here, but if you’re a big Sonic, Phantasy Star or Golden Axe fan looking to recapture that magic, this might get the job done for you.