Torn asunder by unknown forces and ravaged by corruption, the world of Hob is in desperate need of repair and rescue. Its nameless, silent hero’s quest to set things right is one of the most captivating and spectacular adventures of the year.

Having established its mastery of the Diablo-style isometric action RPG with the Torchlight series, developer Runic Games’ latest is an open-world action adventure. Hob is The Legend of Zelda by way of Ico, marrying the former’s exploration and progression with the latter’s quiet, otherworldly ambiance and penchant for puzzles. Yeah, little buddy. I don’t know what to tell you. The operation was a success? Be careful clapping.

Following an unknown catastrophe, Hob’s diminutive, cloaked protagonist is awoken from slumber by a lumbering mechanical creature. He’s tasked with figuring out how to fit the world back together. Well, first his arm is infected with corruption, amputated and replaced with a robot limb, but after that it’s time to get to work.

Unfortunately for our hero, the world of Hob is a puzzle that doesn’t come with a pretty box showing what it looks like fully-assembled. Aside from some warbling noises and gestures from an occasional mechanical companion and vaguely glowing icons on the game’s map, the hero doesn’t get a lot of direct instruction.

Once outfitted with a sword to kill enemies and a massive metal mitt, it’s up to the player to determine where to go and what to do. Their new arm is capable of busting down cracked walls, activating switches, pulling and pushing blocks and occasionally punching large stone structures into different positions to open up new avenues of exploration. As the journey continues, new abilities are discovered, which can also open up previously closed paths.

I often found myself wandering the fields and dungeons of Hob desperately searching for the one thing I needed to progress further. Somewhere there was a switch I hadn’t pushed, a combat encounter I hadn’t engaged in or an item I’d not found. At these times I was flummoxed, but not frustrated.

I don’t think I’ve fallen off a ledge and had to restart a platforming sequence so many times without throwing a fit. The running, jumping, swimming and climbing in Hob is so smooth and responsive, I don’t mind doing it more.

The unearthly beauty of the world doesn’t hurt either. From towering mechanical contraptions to lush forests overrun with bubbling purple corruption, Hob is gorgeous. With a wonderfully subtle soundtrack from Diablo composer Matt Uelmen, it sounds as good as it looks. 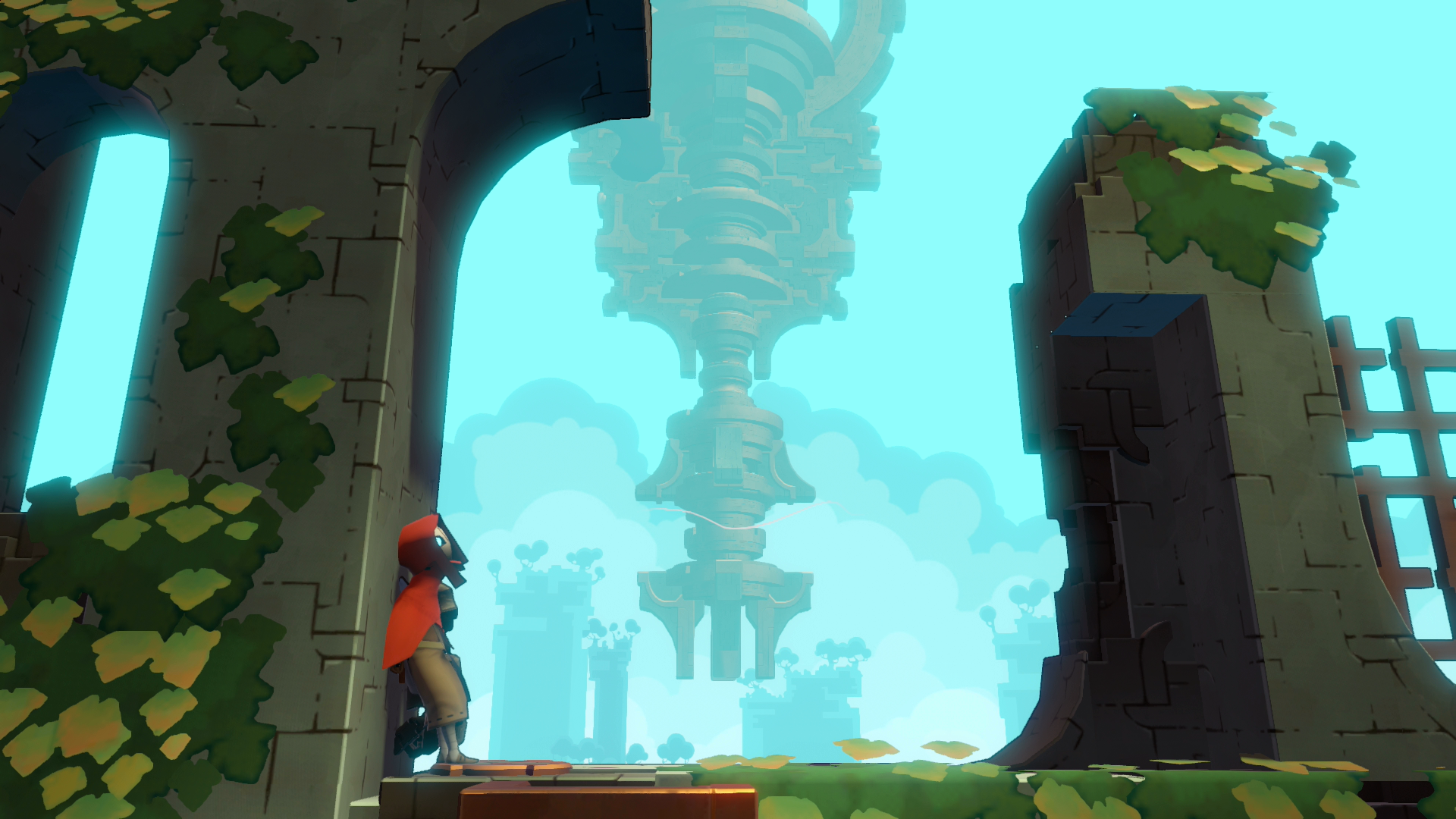 There are special scenic points scattered across the map that were specifically designed to flaunt its style.

That’s not to say the game can’t be frustrating. Playing on a PlayStation 4 Pro (with and without Game Boost on) I regularly encountered massive frame rate drops and slowdown. Any time the game’s camera pulls back, such as when our tiny hero rides a walking mechanical platform, the frame rate suffers. The problem also rears its ugly head during more heavily populated combat encounters, making an otherwise perfectly good mix of action RPG rolling, dodging and slashing a little less enjoyable.

Though battles against only a couple of opponents in non-busy environments aren’t bad at all.

The camera isn’t friendly when battles move to the corners of the screen, obscuring the action. I found myself stuck in the game’s geometry on several occasions (thank goodness for the “respawn” menu option) and the entire game crashed at least three times during my initial playthrough.

But these stutters don’t take away from Hob’s overall wonder. Moments like this make it all worthwhile:

That’s the first of one of Hob’s many major “wow” moments. A horn sounds, the ground rumbles and then a massive forest rises up. It gives players a teasing glimpse at what lies below the surface before crashing into place. After it settled, the frame rate of the game briefly went to complete shit, but I did not care. My god. From that moment on, Hob had my complete and undivided attention, technical hitches be damned.

It took me roughly ten hours to put the world back together, or at least together enough to reach the conclusion of the purposefully ambiguous story. A confrontation occurred and the credits rolled, which is as definite as Hob gets—the details are left up to the player, a vague narrative open to interpretation.

Were Hob a tightly-scripted action adventure that guided the player from point to point and told them exactly what was expected of them, it wouldn’t be nearly as magical an experience, and certainly not as personal. Making my own decisions (and my own mistakes) makes the impressive, world-changing moments feel like something I did. Good job, me.