When Nintendo foolishly licensed The Legend of Zelda to Phillips Media in the early 90s, the result was more than just Zelda: The Wand of Gamelon for the company’s CD-i console. Link: Faces of Evil is the action complement to Gamelon’s adventure game sensibilities. It eschews subtlety for a dungeon crawl-fest that is better left forgotten. This is no lost gem.

Link: Faces of Evil drops the famous hero in Koridai, a distant country seized by Ganon. A prophecy states that only Link can defeat the monstrous villain, so he journeys off to save the day. While Zelda: Wand of Gamelon’s title referred to a magical MacGuffin, Faces of Evil refers to Koridai itself. The land is dotted with massive dungeons in the shape of giant faces, each depicting a different foe. Link’s job is to explore all of these dungeons and slay the evil overlords within.

In many ways, Link: Faces of Evil and Zelda: Wand of Gamelon can be seen as precursors to the dynamic set by Capcom’s 2001 Game Boy Colour titles Oracle of Seasons and Oracle of Ages. Gamelon and Ages focus on exploration and puzzle solving, with Gamelon’s loose structure providing a charming sense of adventure in spite of atrocious gameplay. Faces of Evil, like Oracle of Seasons, is all about combat but the CD-i game can’t square the circle of the game’s horrible controls.

Link: Faces of Evil is a side scrolling action game that is concerned with clearing stages of enemies. While players are able to navigate from location to location via an in-game map, Faces of Evil often drives from one area to the next with limited need to complete sidequests for special items. Zelda: Wand of Gamelon often had players exploring areas multiple times but Link: Faces of Evil is much more single-minded. It’s all about forward movement through combat-filled dungeons, but this approach doesn’t work. Sensitive controls create numerous problems. Link is a jittery squirrel who panics at the slightest input. He jumps suddenly, stabs his sword frantically, and often tosses one more bomb than necessary. Levels are populated with swathes of monsters that swarm from all over, sometimes forever. Without useful controls, it is easy to get overwhelmed. Die enough times and you are booted to the map screen and must start the level again. 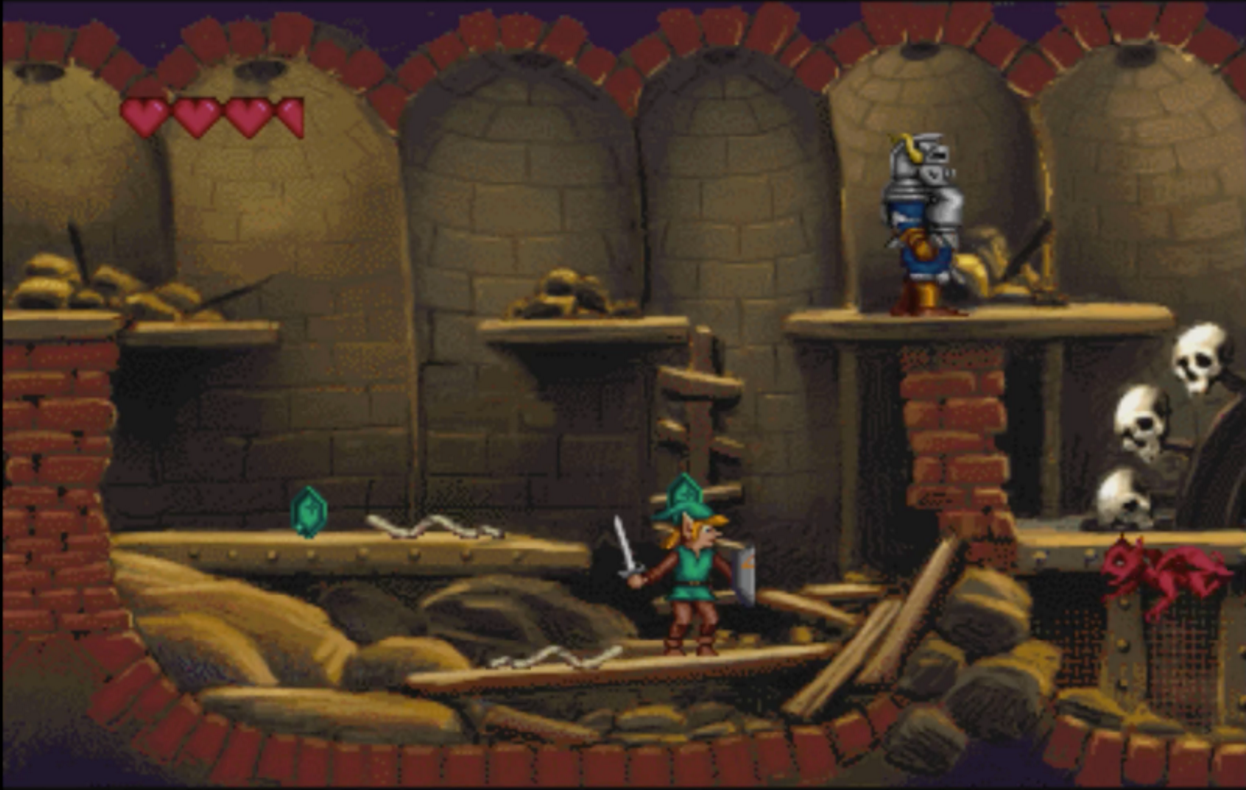 To add variety to the combat, Link: Faces of Evil has enemies drop elemental items. Cold enemies drop snowballs while enemies engulfed in flames drop fireballs that Link can toss around. These items are essential, as some foes can only be damaged by the items. Unless you’re psychic, there will be times you run out of these special items and face off against invincible enemies. As a result, a significant amount of gameplay time is spent returning to levels and farming enough items to proceed.

Bombs, ropes, and lantern oil must be purchased from shops to clear obstacles and help with navigation. If you run out of lantern oil, rooms will turn pitch black and impossible to explore. In the worst cases, there won’t even be enemies to knock Link back to the world map and you will fumble through the dark for minutes trying to find the exit.

These complications intersect with boss fights that often require far more precision than possible. Whereas Zelda: Wand of Gamelon tasked players to find special items that could instantly defeat foes, Link: Faces of Evil futilely aspires to something more exciting. The game expects you to have action-filled fights with its bosses, tense contests where you’re jumping and slashing at the daunting dangers before you. It doesn’t happen. Take the encounter players will have with armoured knight Militron, which is the most absurd boss in the game. He must be defeated by attacks that hit his head, all while he tosses magical fire that deals severe damage. There are no invulnerability frames in Link: Faces of Evil and he can kill you in seconds as a result. The only way to succeed is to spam sword beam attacks and pray they hit their mark. Getting hit means losing your ability to shoot sword beams and dooms you to failure. It’s among the worst boss fights in video game history and emblematic of how much the combat’s reach exceeds its grasp.

Koridai feels like a hostile and dangerous setting but this never seems like an intentional design choice. A reserved colour palette creates a gloomy and depressing game world. With less focus on personal quests or hunting down items for NPCs, Link: Faces of Evil is as a lonely experience. It feels more like an extended stay in the Dark World of the great Super Nintendo Zelda game A Link To The Past rather than a swashbuckling tale of high adventure. Link fights a gluttonous cyclops, encounters characters warped by Ganon’s magic, and turns down a devious attempt from Ganon to join the dark side. All of this plays out in cartoon cutscenes that, while sometimes charming for their subpar quality, also feel out of place in the game’s dark setting. It is jarring to walk through a creepy corridor of packed with skulls and grasping Wallmasters to be greeted by a bouncing harlequin pigman.

There is no silver lining to be found here, just an uphill march through a pointless adventure.

You can watch my playthrough of Link: Faces of Evil here.