Neo Yokio is a Funny but Flawed Critique of Capitalism

Netflix’s original series Neo Yokio waffles between being an indictment of capitalism and a celebration of wealth. While it’s charmingly written, I’m confused about what it wants to say about the wealthy and their pursuits.

Neo Yokio was created by Vampire Weekend’s Ezra Koenig and premiered last Friday on Netflix. It has a star-studded cast featuring Jaden Smith, Jason Schwartzmann, Jude Law as a robot butler and, to my delight, The Kid Mero and Desus Nice from Vice’s Desus and Mero. It’s an anime about people with money who are prone to melancholy and live in an alternate version of New York that is under constant threat of demon attacks. Nouveau riche demon hunter Kaz Kaan, voiced by Jaden Smith, is mourning the end of a relationship at the start of the series. His sulking sessions are often interrupted by his Aunt Agatha, who demands that he actually work for his money.

For anime fans, it references and parodies a whole host of classic shows, but rather than comment on nostalgia, it’s preoccupied with rich people and the pursuit of material objects. Kaan is a dumb, sometimes likeable kid, but he’s also entirely preoccupied with The Bachelor Board, a public ranking of the most eligible bachelors in Neo Yokio. He’ll do anything to retain his status—except actually do jobs for money. He’d rather play field hockey with his friends Lexy and Gottlieb or shop for new suits. As the show goes on, Neo Yokio grows condemnatory of his shallow worldview. As he loses his status and becomes more and more obsessed with staying in his privileged social standing, his friends call him out for his selfish behaviour, to the point of directly calling him a misogynist for how he treats the women in his life.

Neo Yokio is often deftly written. It has a subtle, wry sense of humour that humanises its characters while also making them seem incredibly stupid. Arcangelo, Kaan’s biggest rival, gets this treatment most regularly. At one point Kaz Kaan runs into him at their favorite suit shop, and Kaz exclaims, “Do you live here or something?” Arcangelo replies, with utter sincerity, “I wish I lived here.” 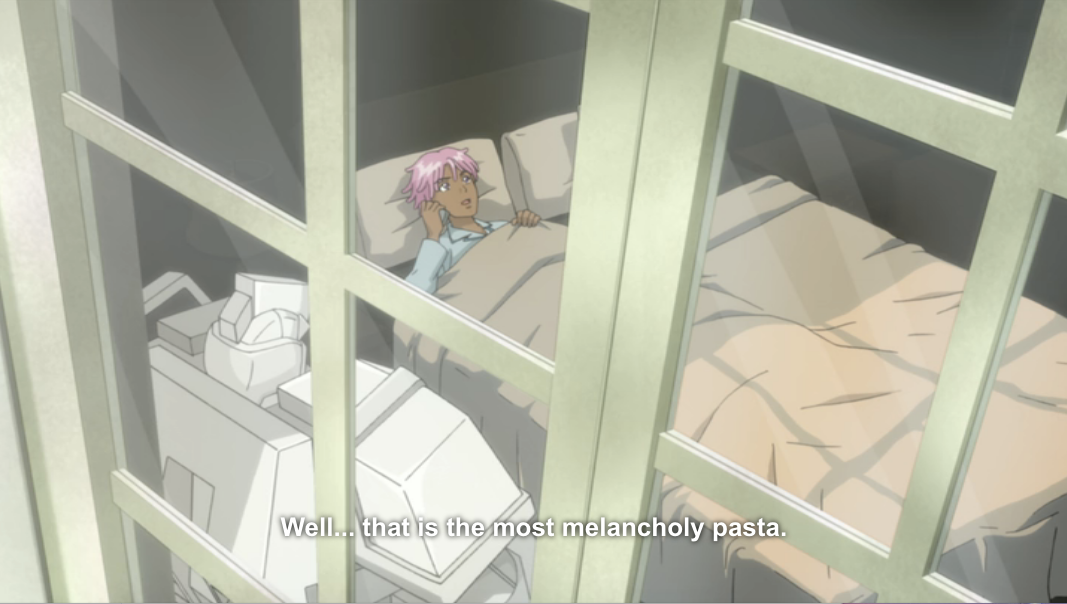 Often I found myself laughing out loud at Kaan’s over the top self-absorption. At one point he says he’s too sad to get out of bed until his aunt offers him squid ink fettuccine, which he declares “the most melancholy” of pastas. But for all its attempts to take down rich culture, Neo Yokio loves the opulence of it. Halfway through the season, Lexy and Gottlieb invent a cocktail called the Caprese Martini. When characters like Kaz or Arcangelo chase bizarre trends, Neo Yokio frames those characters as frivolous, but Lexy and Gottlieb are always cut more slack. Kaz Kaan even gets to be their mascot, the Caprese Boy, and it’s adorable. Still, Lexy and Gottlieb suffer from many of the same afflictions as Kaan: They are image-obsessed womanisers. But they, and other citizens of Neo Yokio are likeable, and it’s here when I get confused about what the show is trying to say about the wealthy and their struggles.

Neo Yokio doesn’t quite do the work of unpacking how the pursuit of material objects and social status emotionally stunts its characters. Kaz Kaan suffers emotional setbacks and learns lessons about chasing status, but at the end of the day he’s still drinking Chateau Lafitte in a cafe on the upper floors of a submerged World Trade Center (which in this universe was never destroyed). There are no poor people in their lives, nor any middle class, and Kaz’s loss of social status is framed by the show as just as bad as the plight of the hypothetical working class. The only person we see in the show who seems to come from a impoverished background is pop star Sailor Pellegrino from North Cackalacka. It turns out she is literally a demon who was attempting to possess Damien Hirst’s sculpture “For The Love Of God,” which the show says is perhaps the greatest work of art, ever.

Neo Yokio treads a line between ironic detachment and honest social critique that makes it hard to interpret at times. If everything is ironic, does it reveal some kind of sincerity? Or does the underlying truth of ironic statements only make them more ironic? Is it a joke that an image-obsessed rich person would say that a diamond-encrusted skull is the greatest work of art of all time, or is it still kind of true despite that joke? 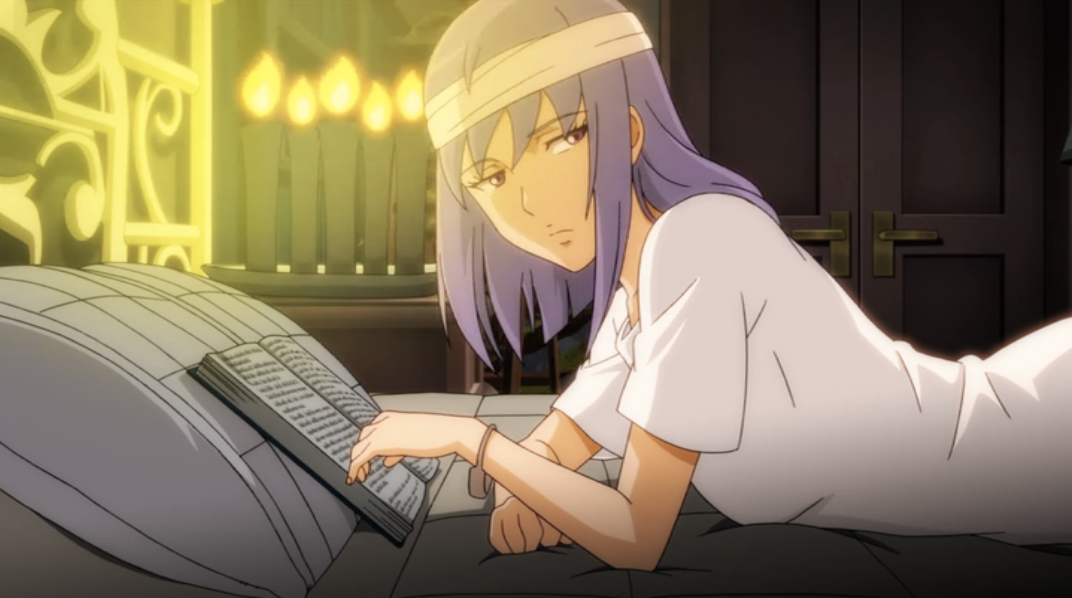 There are oppositional viewpoints in Neo Yokio, but that doesn’t help one get a better understanding of its worldview. Socialite Helena Saint Tesero is by far the most outspoken critic of the culture of Neo Yokio—other than the demons who threaten the city—and even though her critique of capitalism is compelling, it is just as superficial as Kaan’s love of suits. In the first episode, Kaan saves Saint Tesero from possession, and in the next he goes to visit her in the hospital with the gift of a “big Toblerone.” At the hospital Saint Tesero declares that she’s quitting her job as a fashion blogger and in fact finds the whole culture of Neo Yokio disgusting.

Kaan replies, “Okay, okay, I get it. You had a profound experience. You got possessed and now you think you’re better than all this, but come on. At the end of the day, you’re still a rich girl who lives in a giant townhouse in the Sea Beneath 14th Street.”

Later on Kaan gets his comeuppance for being dismissive of the concerns of the women in his life, but it doesn’t change the fact that he is right about Saint Tesero’s sudden change of heart. Saint Tesero, voiced by real life fashion blogger Tavi Gevinson, approaches her newfound socialism as another trend. Her fans, dubbed the Helenists, take up her new uniform of a hospital gown and bandages. Each time Kaan visits her she’s added another accoutrement to her uniform of disaffection. At one point she declares flamboyantly to Kaan that the outside world is bullshit. “I’m never leaving this room again,” she says.

Neo Yokio does eventually come down on the side of condemning capitalism, but only after it luxuriates in the nice things that capitalism can produce. In Neo Yokio’s version of New York, Long Island City is a decrepit, cramped slum with the upper class running extravagant Formula 1 races down its narrow streets. The rich are so desperate to cling to what’s theirs that they continue to live in neighbourhoods that are completely underwater, and the underclass are absent from their lives until they appear as literal demons. In the very last episode, Kaan races through Queens and ends up in a wrong turn where he is assaulted by the residents there. “Can’t you see we’re dying down here?” they yell. This moment of realisation for Kaz, and the audience, that there is a whole class of people in Neo Yokio that they have never encountered would have more weight if the show wasn’t just as invested in suits, cocktails and elegance as Kaz is. Kaz is the Caprese Boy, the number one bachelor, a magistocrat—a buffoon, but at times a loveable one. By the end of Neo Yokio, he has started to realise that the nice things he has surrounded himself with won’t make him happy. But to the people in the slums of Long Island City, or the demons he banishes, “nice things” don’t matter as much as human dignity.