Vava Mechanical Gaming Keyboard Review: Not Bad For a Budget Board

There are a lot of big-name peripheral manufacturers making mechanical keyboards, but a search for the term “mechanical keyboard” on Amazon yields a ton of keyboards from companies you’ve probably never heard of. Like Vava, makers of the relatively good £59 no-name mechanical I’ve been typing on for the past week.

At this point in my exploration of mechanical keyboards I’ve typed on boards from most of the well-known, established brands. While the switches, designs and features differ, I basically know what to expect from a Razer, Corsair, Logitech, Filco, Ducky, Varmilo, Vortex and the like. I had absolutely no idea what to expect when asked to try out a keyboard from Vava, a company established in 2015 to create audio devices that is now creating lamps, dehumidifiers, dash cams and milk frothers. 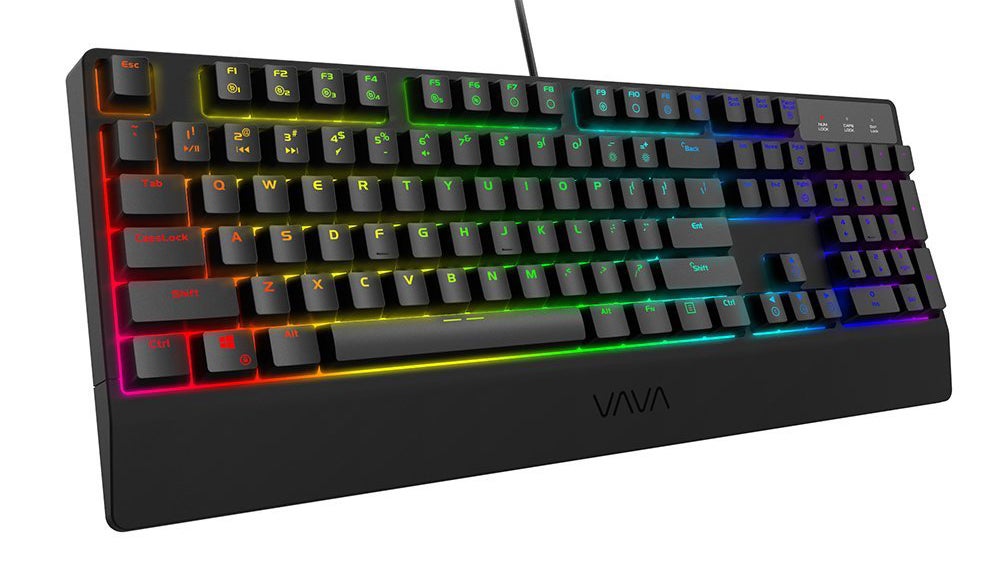 The Vava mechanical keyboard has no name. The company only makes the one, so I suppose a distinction isn’t all that important from its standpoint. The product page for the keyboard lists it as “Vava Mechanical Gaming Keyboard with 16.8 Million RGB Colours & 104 Keys.” Their branding might need a little work.

As described, Vava’s mechanical gaming keyboard does feature customisable RGB lighting capable of reproducing 16.8 million colours, with UV coated caps with translucent legends to let the light shine. It’s a full-size, 104-key board with full rollover, which means it’ll register a press no matter how many keys are being held down. 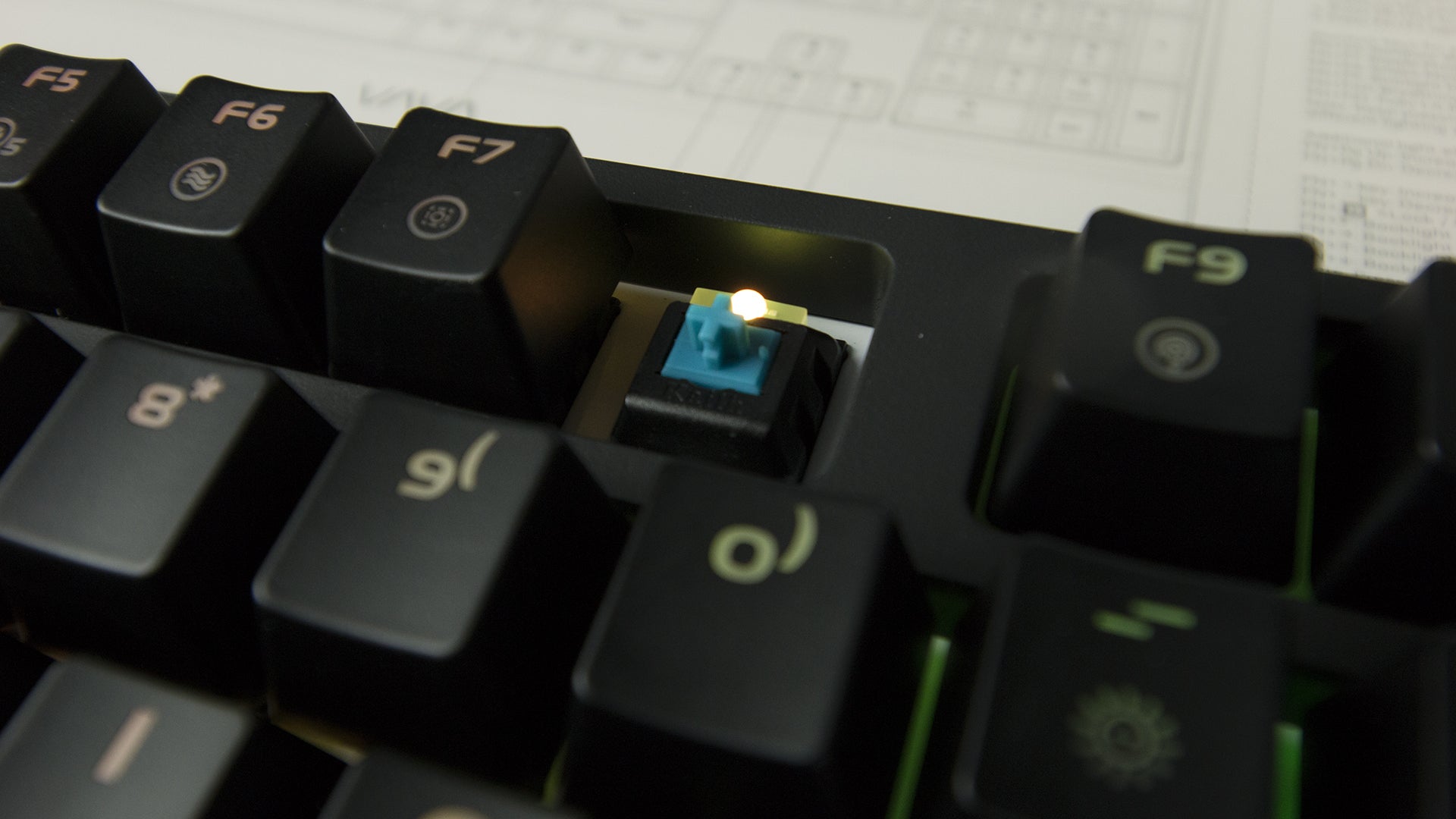 The switches are Kailh blues, clicky and slightly weightier than Cherry MX blues. It’s a pretty loud board.

It Works Just Fine: I have to admit I was a little worried that a keyboard from a less established brand would somehow be inferior. I’ve been using the Vava for a week now, and I’ve not run into a single major issue with its performance. Some of the materials used in its construction aren’t the greatest, particularly the keycaps, but it’s performed the tasks I put before it—gaming, writing articles, dodging beverages—admirably. 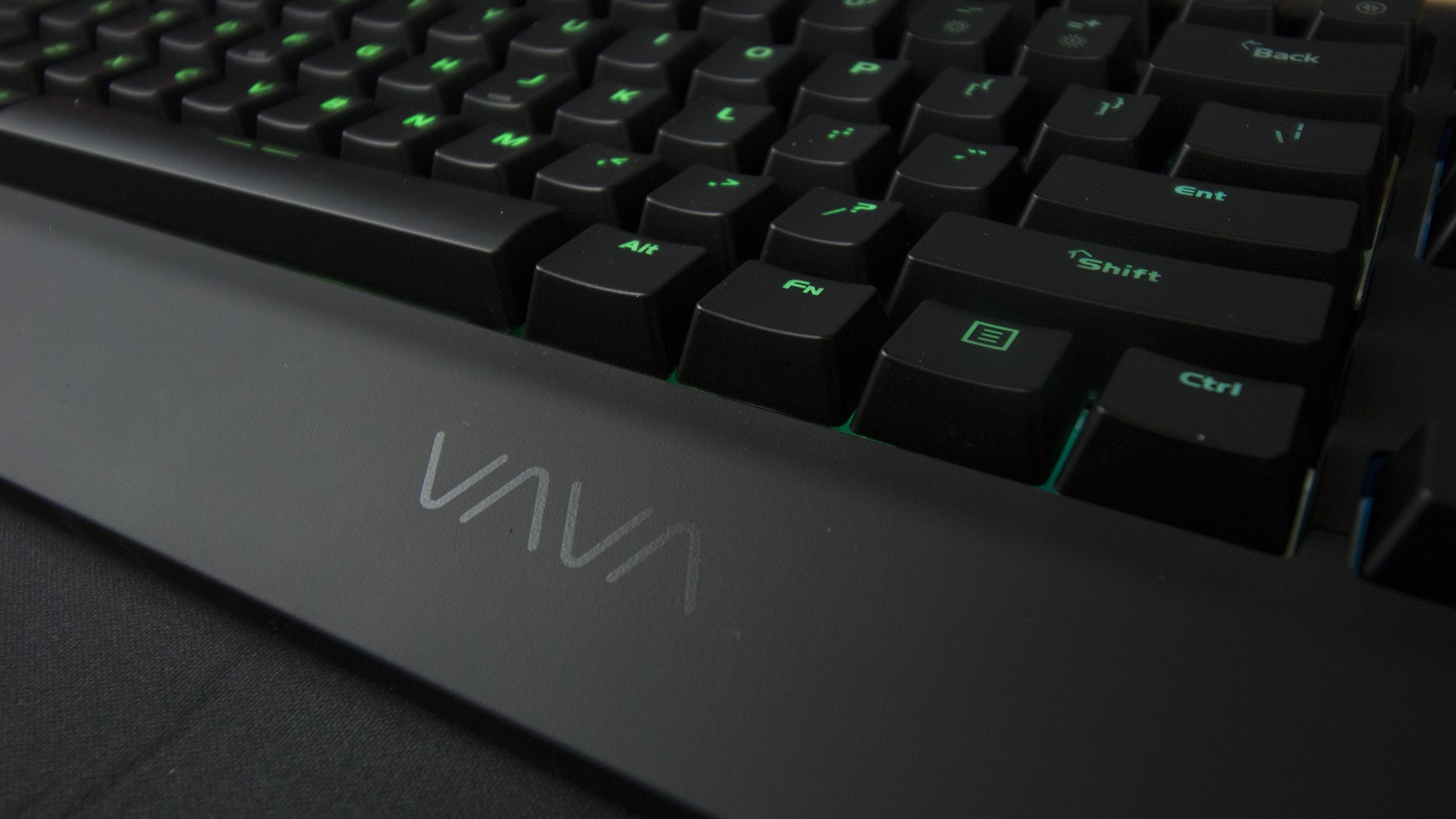 Pretty Solid: The Vava board features a basic plastic case over metal plate design, and it comes together quite well. The board stays in one spot under the most furious of typing, and I don’t get any rattle or shake. The underside features three different channels to run its braided USB cable through, which is a lovely feature. It’s a well-designed and craftier keyboard. 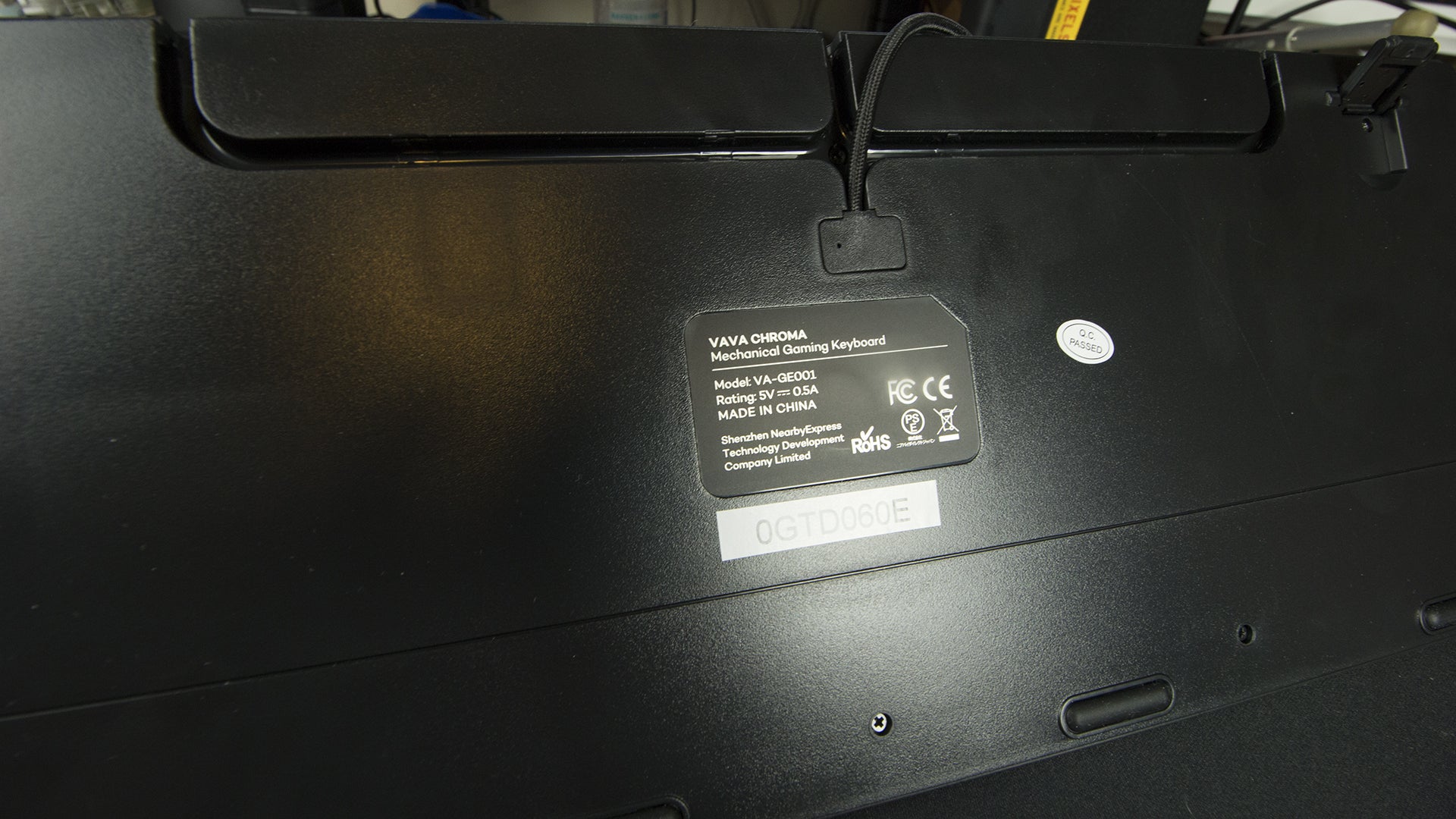 Looks like it says Vava Chroma on the back, but Chroma is taken.

The Pretty Lights: Not only does the Vava feature bright and colourful RGB lighting, users can modify the lighting on the whole board or a single key on-the-fly with simple keyboard controls—there’s no external software necessary. There is a nice selection of pre-programmed effects, but the real kicker is the ability to program and save five customised lighting profiles directly to the board. 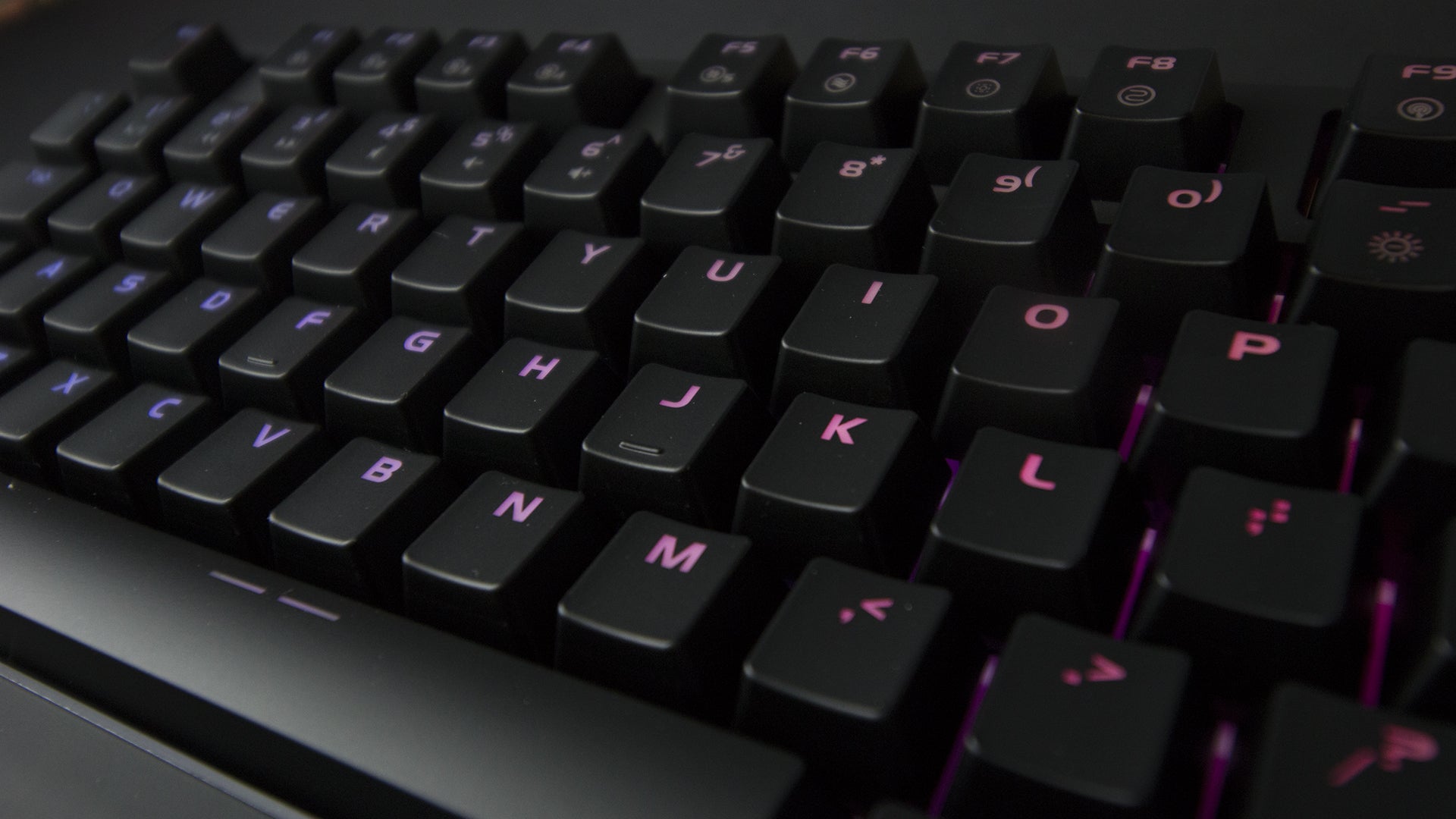 And while I have my reservations about the quality of the included keycaps, they are really great at letting the light shine through.

Not A Fan Of The Caps: Now that I’ve mentioned not liking the keycaps included with the Vava a couple of times, let me tell you about how I don’t like the Vava’s keycaps. As lovely as they are when the light shines through, they’re thin and they feel really cheap. 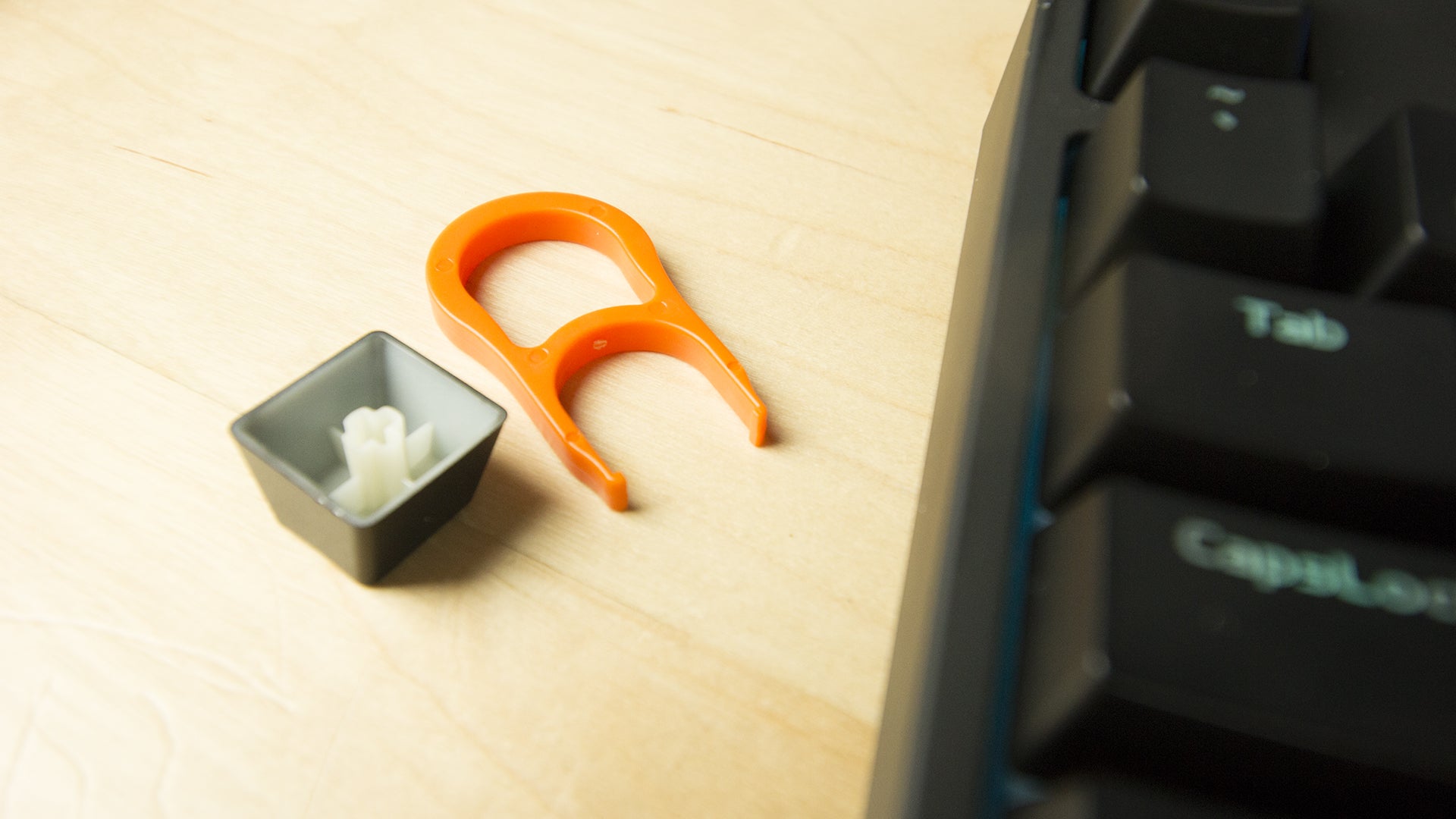 On the plus side, it’s a great excuse to shop for better keycaps. Vava’s even included a keycap puller in the box, as if they knew.

Stop Calling It Ergonomic: Not a mechanical failure or flaw, but this image Vava is using to promote its mechanical keyboard is rubbing me the wrong way. 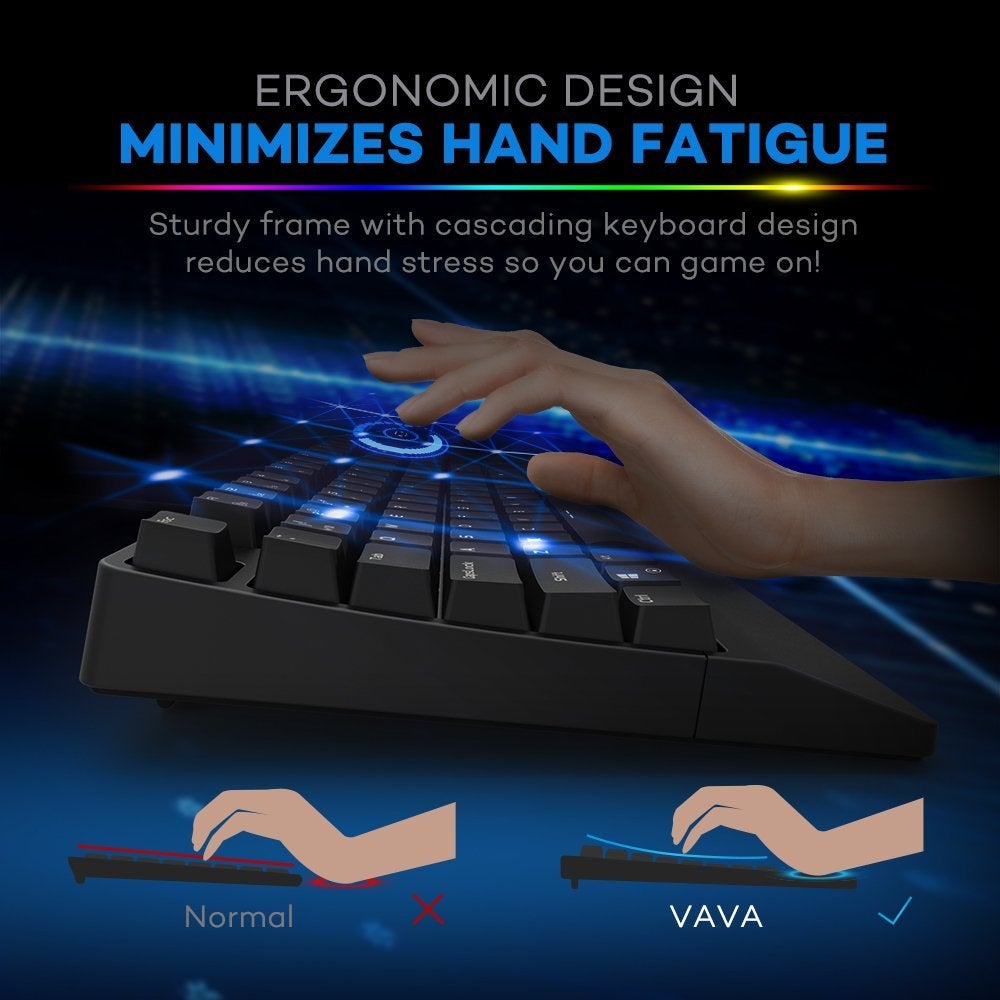 The “cascading keyboard design” refers to the way the keys form a sort of curve from row to row. They show an image of “normal” flat keys next to Vava’s curved profile keys with a friendly blue tick mark indicating that the latter is better. Of course it’s better. The keys are standard OEM profile, a sculpted shape used by most major mechanical keyboard manufacturers.

An ergonomic keyboard design generally involves the keys being arranged in such a way as to reduce wrist and shoulder fatigue. This is just a standard keyboard layout.

Since Vava’s mechanical keyboard features OEM profile keys atop MX compatible Kailh switches, there’s a whole world of keycaps waiting to replace the ones that come with the unit. First let’s swap out the WASD with some textured FPS caps from HyperX, which Kingston’s gaming arm has recently started selling separately. 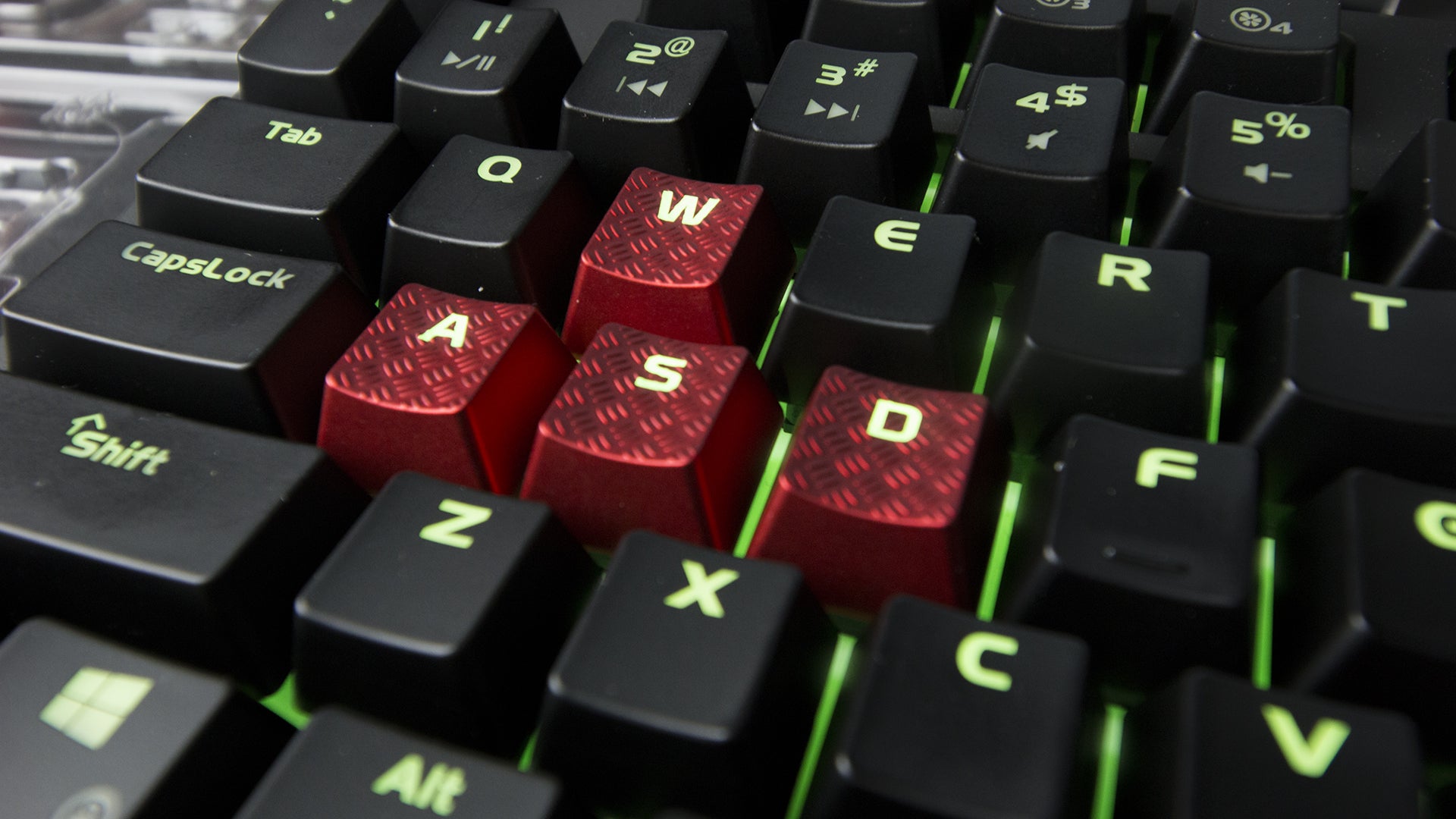 Nice. Now we’ll add some translucent-topped caps with side-printed legends I picked up off Aliexpress, and turn the lights down low. 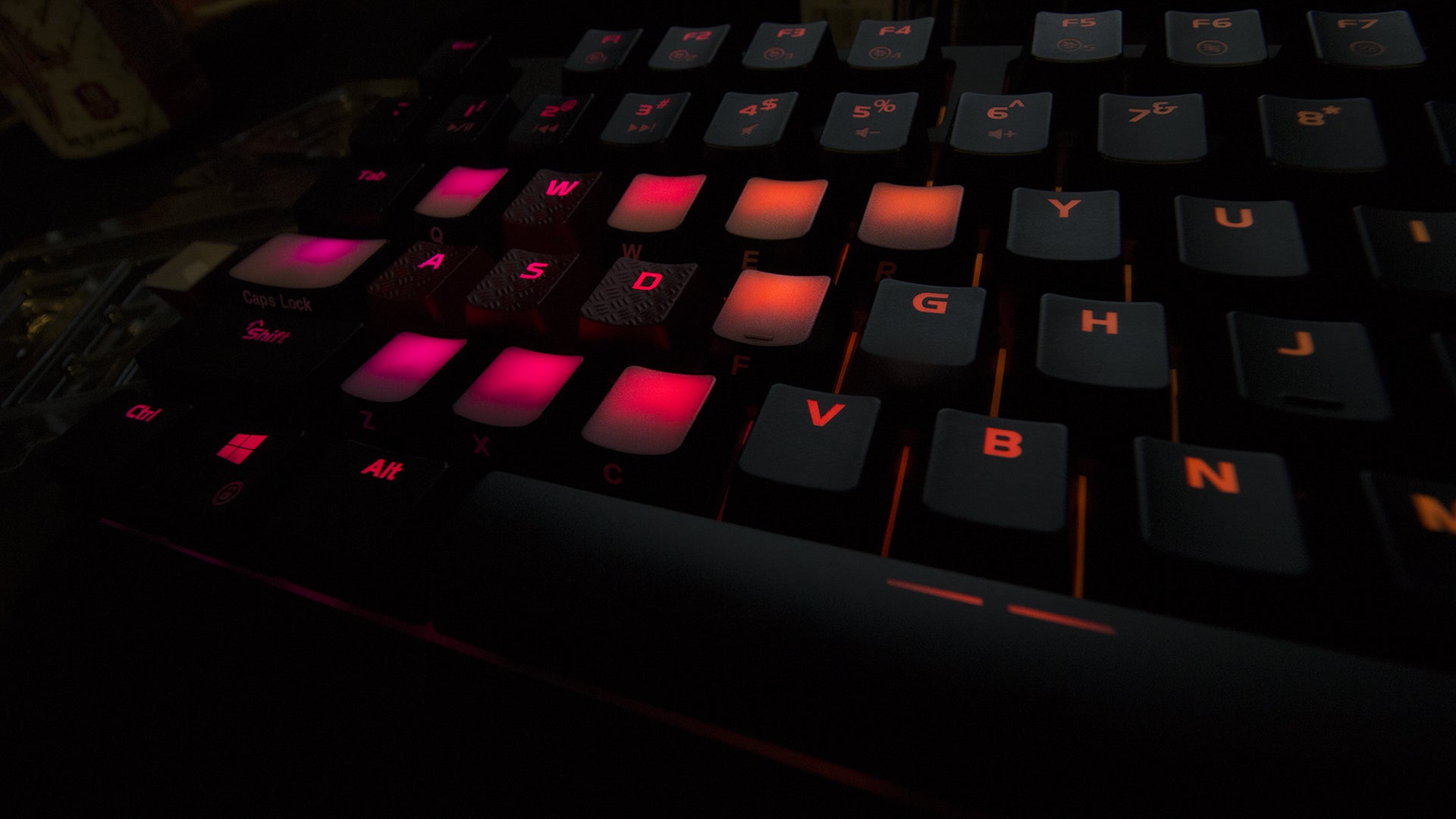 Oh yeah. Still pretty cheap, but shiny. You get the idea.

No one is going to come into my office, look at my desktop setup and excitedly gasp, “Oh cool, you’ve got a Vava,” and that’s fine. As it turns out, a company doesn’t have to have a huge booth at CES or its logo on the sleeve of a professional esports team to make a perfectly good mechanical keyboard. Vava’s “Mechanical Gaming Keyboard with 16.8 Million RGB Colours & 104 Keys” is glowing, clicking proof. It might not have some of the bells and whistles found on big name boards or a cool model designation, but it delivers a lot of quality and functionality for under £60.

Not too shabby, Vava. Might have to try one of those milk frothers.