Ark is Going Full-On Sci-fi in Aberration, Its Next Major Expansion

By Matt Wales on at

Ark: Survival Evolved hasn’t even been out a week in its official Version 1.0 form but that hasn’t stopped developer Wildcard from unveiling the game’s second major expansion.

Following last year’s controversial, desert-based Scorched Earth paid-DLC, which was released before the game even hit 1.0, Ark’s newest expansion is called Aberration. It’s set for release later this year, and moves away from the game’s usual prehistoric-with-a-dash-of-fantasy theme to full-on, Avatar-style sci-fi.

Aberration unfolds on the broken ark that made a sneaky, perplexing background appearance in the dramatic end-game sequence that Wildcard added at launch. Community members have been speculating about it all this week. Top notch speculating there, community! The Aberration ark’s malfunctioning environmental systems, says Wildcard, have created a harsh, unwelcoming world for brave survivors to traverse, one battered by earthquakes, radiation exposure, and gas leaks.

It might be pure hell on the surface, but stick your head underground and Aberration looks like it will be rich with exotic biomes, flora and tameable fauna. As the announcement trailer makes clear, we’re well out of dinosaur territory now, with Aberration’s wildlife taking more inspiration from James Cameron than Jurassic Park.

There are a few lingering shots of the phenomenal-looking Rock Drake—a gliding lizard thing that can camouflage itself completely, and which I cannot wait to stick impolitely to the walls of neighbouring bases—plus the massive Cave Crustacean. There’s also a Lantern Pug, which basically appears to be a cheery torch. Aberration’s apex predator might be the Nameless Queen which, says Wildcard, can “impregnate your foes with a horrifying reproductive chest-burster.”

The studio says the expansion will introduce over 50 new craft-able Engram items, most of which have a militaristic flavour about them: there are hazmat outfits, charge lanterns, explosive rounds, batteries, glow-sticks, and rail-guns. Oh, and did I mention the rock climbing, zip lines, and wingsuits!? Wildcard is upping the action, and there are hints that Aberration will tie in more closely with Ark’s recently introduced Tek Tier end-game content. Element, the hard-to-acquire resource that powers many of Ark’s desirable high-level sci-fi gizmos, will apparently feature heavily in Aberration, with Elemental chambers, and ferocious Element-infused creatures known as the Aimless making an appearance. 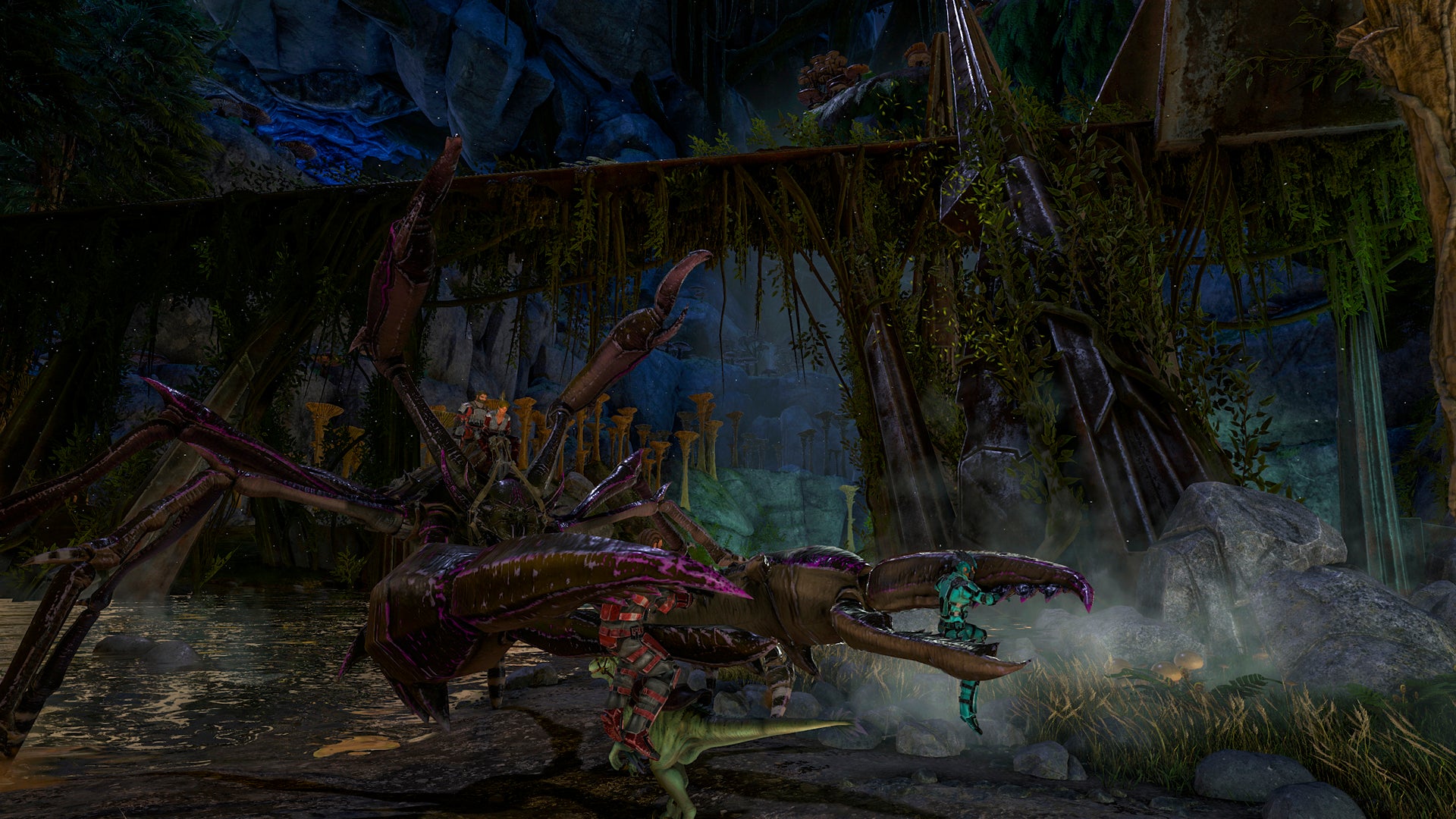 It’s certainly sounding like Aberration will offer something a little closer to sci-fi horror than you’d ordinarily see hanging out with Gary the otter down by the river on Ark’s original Island map. That’s good news. As exotic as Ark’s semi-official Ragnarok and The Center maps are, they don’t play substantially differently from the Island. Regardless of the drama around last year’s Scorched Earth, it offered a significantly more focussed, refreshingly different kind of challenge, and if Aberration does opt for a blend of alien wonder and action-horror, then it could also be a boost for the game.

Aberration will be available on PC, Xbox One and PlayStation 4 this October either as a standalone or as part of the game’s season pass. The latter gives all-in access to Ark’s previous Scorched Earth expansion, the newly announced Aberration, and a still-secret third expansion that I’ve just decided should be a world full of majestic, flying bums. Season pass owners will get two exclusive items immediately: the Aberration Helmet, and the Aberration Sword. Which is basically one set of Aberration Balls away from being a full Aberration Dong.