Gen Con's Surprise Hit Was a Board Game About Photosynthesis

Before last weekend’s US tabletop gaming convention Gen Con, I was skimming lists of the weekend’s most anticipated games and seeing the same-old, same-old: a feudal Japan card game, a fantasy role-playing campaign—but a ubiquitous outlier kept catching my eye: Photosynthesis, a game about growing trees. Halfway through Gen Con’s first day, attendees had greedily snapped up every one of publisher Blue Orange’s over one thousand copies.

That a forest-planting game had skyrocketed to the top of everyone’s “must-buy” list surprised me, especially when in competition with Gen Con’s flashier and more traditional sword-and-sorcery titles. But after spending some time with Photosynthesis, its allure became immediately apparent. It’s rare that a board game’s mechanics perfectly reflect its theme; often, it seems that designers could have costumed their gameplay idea in any sort of outfit, and it would lose nothing except perhaps marketability. Photosynthesis is not like that. 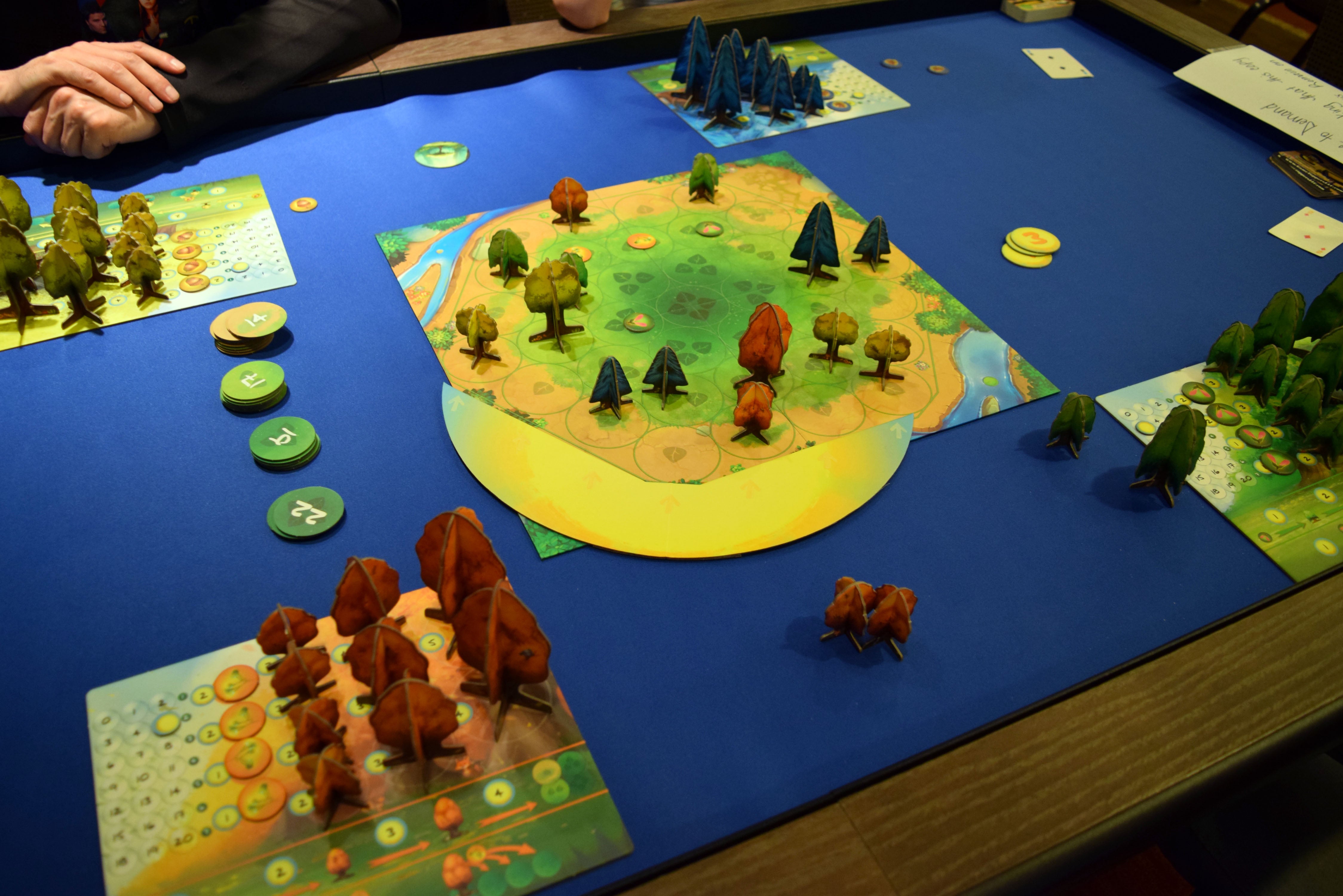 It works like this: four players compete over whose trees absorb the most light. Each round, which represents a tree life cycle, has two phases: photosynthesis, when trees generate light points, and the life cycle phase, when players can grow taller trees. Trees evolve from seedlings into towering canopies, which necessarily cast shade on smaller trees and steal their light. The more light a player’s trees absorb, the more light points they have to spend on more seedlings and tree upgrades. Toward the middle of the board is the richer soil, and if players end their trees’ life cycle there, they gain more points. All the while, the sun revolves around the board, changing shadows’ direction.

There’s no dissonance between what Photosynthesis is about and what it does, which makes learning the rules satisfyingly intuitive. The game’s currency is sunlight, which is converted into energy. And a primary-school level of science know-how asserts that taller trees require more energy. If you’ve ever been in a forest or are simply capable of abstract thought, you know that taller trees cast shadows on shorter ones, which is a crucial mechanic for foiling opponents’ tree life cycles—but to be strategic, you have to plan ahead for where the sun will be when you will need sunlight the most. There is no clutter in Photosynthesis’s gameplay. 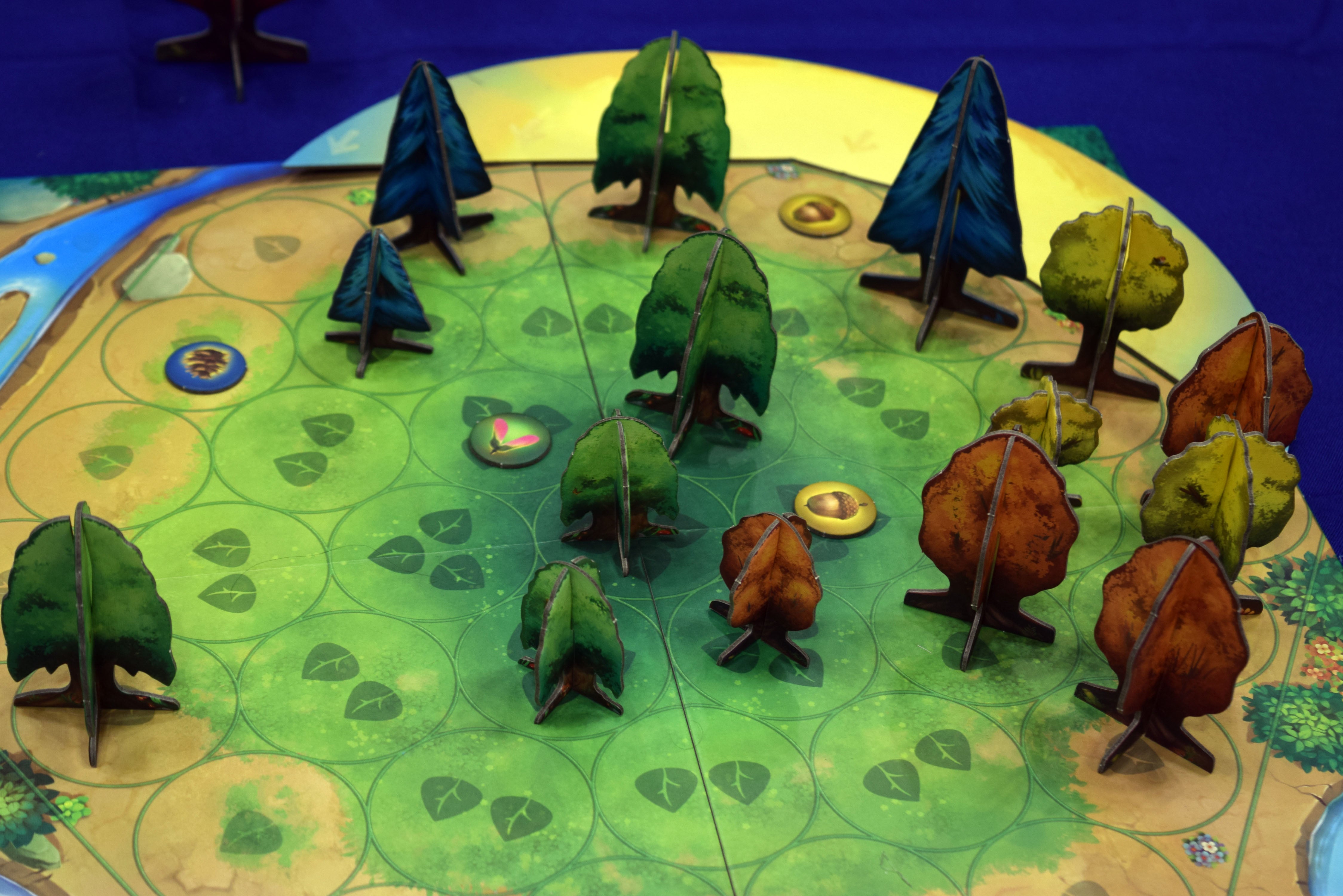 Although that gameplay is instinctual, Photosynthesis is deep. It’s got a chess-like quality where, because of the sun’s rotation, players must think several moves ahead. In two brief play sessions, I was exposed to a variety of strategies ranging from fastidious sunlight conservation to the offensive approach of growing the tallest trees the quickest. The game invites experimentation with its easy-to-learn mechanics.

Much of the hype surrounding Photosynthesis was because Gen Con attendees viewed it as a—I’m so sorry—breath of fresh air away from themes of clan warfare, medieval political intrigue and jewel trading that, frankly, might as well be mix-and-matched amongst some of the top popular games. Everything about Photosynthesis feels clean and whole. Playing on the show floor, several onlookers would wander by, intrigued by its vivid yet understated art and fresh interpretation of resource management mechanics.