Night Trap, the FMV game that US senators once called “sick” and “disgusting,” is now available in a spruced-up edition on PlayStation 4 and PC, 25 years after its original release on Sega CD in 1992. There’s even a few special, delightfully cheesy, bonus gifts.

Before getting to the nitty and the gritty of the 25th Anniversary Edition, though, we need to travel back to where it all began, to a time known as “the 80s,” when the toy company Hasbro was developing a VCR-based gaming console called Control-Vision, which would be able to quickly swap between multiple video tracks to create an interactive fusion of movie and game.

Night Trap, the first Control-Vision game, involved vampires invading a home in search of blood. As Hasbro was in the market of selling to children, they were concerned about the game featuring “reproducible violence,” said James Riley, the director of a new documentary about the game. Thus the vampires became “Augers,” loping, toothless vampire-wannabes who use devices called “trocars” to drill into the necks of their victims because they can’t bite.

After several teenage girls go missing, the police call in the Special Control Attack Team (S.C.A.T.), who discover and hack into a series of traps and a surveillance system throughout the house. Together with undercover teen agent Kelli, played by former child star Dana Plato, you infiltrate the estate and take control of the cameras and traps.

Night Trap was developed over six months in 1987, with a budget of $1.5 million ( £1.17 million) and 16 days spent shooting 35mm movie footage. But Hasbro canceled the Control-Vision in 1989. Night Trap got a new lease on life thanks to the Sega CD a few years later, which could handle its video-based gameplay.

But no one expected the controversy. In December 1993, senators Joe Lieberman and Herb Kohl led a Senate Committee hearing on video game violence that focused largely on Mortal Kombat and Night Trap, calling the latter “trash” tantamount to child abuse. “Instead of enriching a child’s mind,” Lieberman said, “these games teach a child to enjoy inflicting torture.” The committee averred that Night Trap featured gratuitous, gory, sexualised violence against women at the hands of the player, none of which was in the game and all of which made it patently obvious that none of them had actually investigated it for themselves.

Kid-friendly retailers Toys R Us and Kay-Bee Toys pulled the game from their shelves two weeks before Christmas, but as often happens, sales increased anyway due to the controversy. In January of 1994, Sega voluntarily removed it from the market completely. Later that year, a video game rating system was implemented and Night Trap returned to Sega CD, granted a Mature rating by the newly-formed ESRB. The game was also ported to Sega CD 32X, Panasonic 3DO, MS-DOS, and Mac.

As the years flew by, Night Trap became little more than an odd, mostly-forgotten footnote in video game history...until 2014, when Digital Pictures tried and failed to raise money for an HD remaster via Kickstarter.

In 2016, an anonymous five-minute video of someone playing the game on a smartphone appeared on YouTube. It was soon revealed to be the work of Tyler Hogle, a developer who had been contracted to port other games by the publisher Digital Pictures to mobile, and decided to work on Night Trap in his spare time. The video created some buzz and Hogle got in touch with Tom Zito, who was enthusiastic about the idea of a re-release. The original source code no longer exists, but director James Riley provided Hogle with timed master footage. Hogle played the 1992 game several times to learn the action cues and, as the one-man development studio Screaming Villains, produced Night Trap: 25th Anniversary Edition. 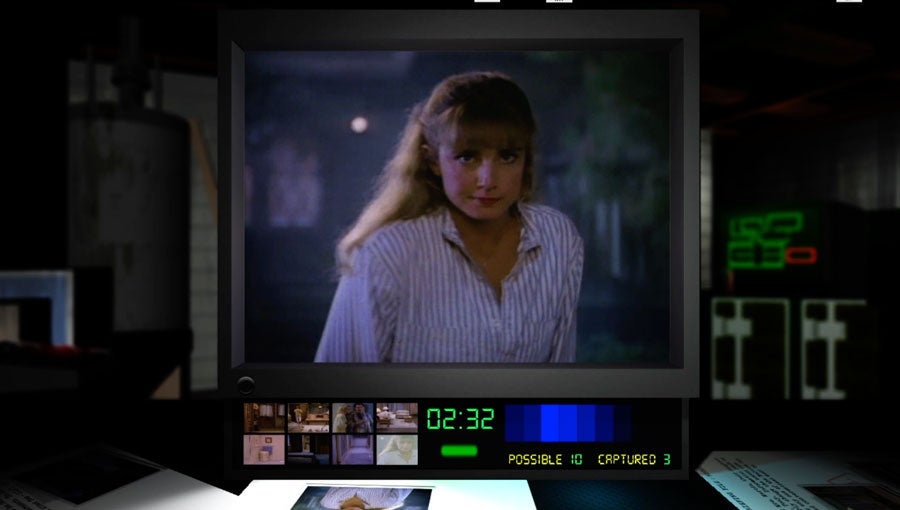 All of which brings us to a time known as “now.” Is Night Trap worth all the celebration, or should it have remained an historical curiosity?

The critics of yesteryear weren’t wrong in calling the gameplay limited and repetitive. There are eight cameras in and around the house, and you switch between each video feed watching for Augers. A flashing light bar will change from green to red when one of them is near a trap, and you press a button to spring it. There are revolving wall traps, bed traps, and the obligatory holes in the floor (presumably the dead Augs pile up and fester in the basement).

There are plenty of ways to find yourself fired from S.C.A.T., and in this economy, losing your job is no joke. Any of the girls get killed? Game over. Too many Augers shuffling around the house? Game over. There’s a colour-based security code that changes from time to time, and if your traps aren’t set to the right colour, they won’t work. The changes are spoken aloud by the Martin characters, so you’d better hope you’re listening when one of them says “Darling, go in the basement and change the Auger code from blue to yellow.” It’s a lot of timing, memorisation, and often an exercise in frustration.

That said, it’s also enjoyably addictive. A full game lasts around a half an hour, but it’s easy to spend a few hours saying “One more try,” starting again, and aiming for perfection. With six endings, there’s a fair amount of replay for such a limited game.

While the gameplay will be familiar to anyone who’s played any earlier iteration of Night Trap, there are enough additions to keep even seasoned vets on their toes. Footage deleted from the original version have been restored and inserted back into the game, including a new opening scene and a new character death sequence.

There is a new user interface, but you have the option of changing it to the overlay from past versions. This adds a layer of difficulty, for in the 90s the room icons were static images and you could only see what was going on in a room by selecting it. In 2017, the icons have dynamic, real-time thumbnails, so if you see movement, you know there’s something going on. The game looks as good as it’s ever going to considering the source material; even the occasional instance of VHS static only adds to the 80s atmosphere.

Completing the game unlocks “The Basement,” a theatre mode that allows you watch the full content of the storylines that occur during the game. I know how it sounds: you have to beat the game to see the story! But it’s a terrific addition, quelling my biggest complaint about the game: with so many feeds to watch and upwards of 100 Augers to catch, you simply can’t stop to watch a conversation between two characters. Talk about frustrating: I had to click away from this amazing scene to trap some dopey, garbage bag-wearing pseudo-vampires.

But wait! Night Trap: 25th Anniversary is a gift that keeps on giving. Play a perfect game and you unlock a playable version of Scene of the Crime, the brief, never-released VHS prototype that led to Night Trap’s development. A lite-horde mode called “Survivor” is included, where Augs appear in random spots in waves and you try to catch as many as possible. As if that’s not enough content, there’s even a couple of documentaries in the package.

Night Trap will certainly appeal most to anyone with a fondness for B-grade horror movies along the lines of Slumber Party Massacre. It’s got the requisite stock characters, corny dialogue, big hair, and crop tops. The game is full of bizarre moments, whether it’s a car full of teenagers gleefully singing “Row, Row, Row Your Boat” or a member of the vampire clan shooting lightning from his fingertips. And of course let’s not forget the poor toothless Augs. Night Trap: 25th Anniversary is more than a worthy celebration of a piece of video game history, it’s a love letter to it.

And should you ever wonder how much video games and society have evolved since Night Trap earned an M rating in 1993, here’s a good indication: this “disgusting” game is now rated T for Teen.