Inspired by the old-fashioned typewriter and designed with luxury in mind, the Azio Retro Classic is a mechanical keyboard sporting rounded backlit keycaps, a zinc aluminum alloy frame and a genuine leather base. The nameplate says “Elegantly Fierce.” It’s not wrong.

Last year Azio introduced the MK Retro, a lovely little typewriter-inspired keyboard. You may have caught a glimpse of one in our recently-published mechanical keyboard video. Available in a wide array of colors (I need the black and pink), it’s a charming and unique device that draws the eyes and hands. 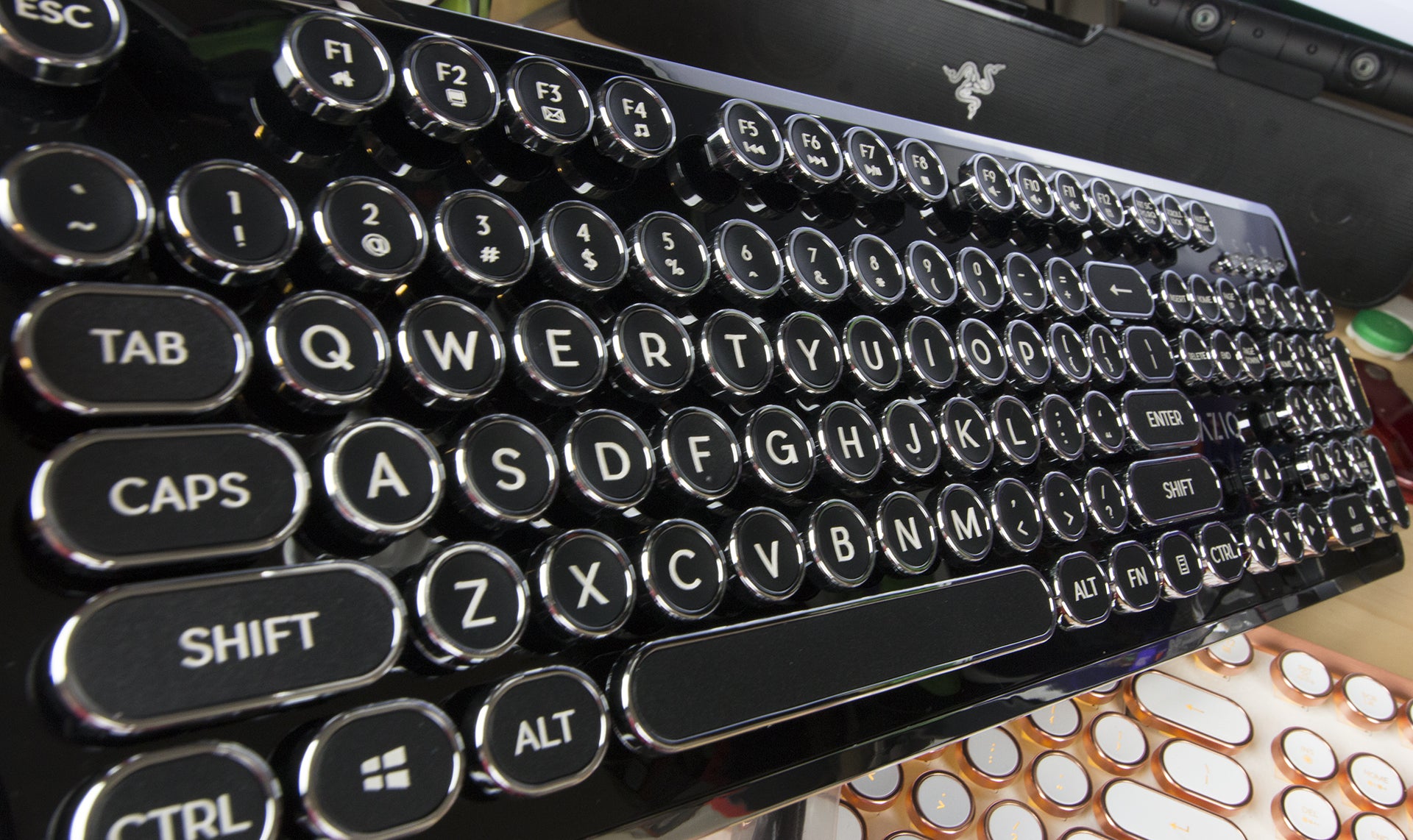 The MK Retro also went a little overboard with the font size.

It’s nice, but Azio wanted to make something nicer, and so the Retro Classic was born.

The Retro Classic takes the MK Retro concept to the next level. The polished plastic top plate of the MK became genuine leather. The painted plastic frame is now a zinc aluminum alloy plated with either a chrome or satin copper finish secured with rivets. The keycaps, while still plastic with an electroplated metallic finish, now feature a shine-through element, with custom mechanical switches to allow the light to shine through the stem, providing even illumination.

These improvements and upgrades over the MK Retro mean that the Retro Classic not only looks vintage, it feels (and smells) vintage as well. It’s a weighty, shiny input device that would look perfect at home on the desk of a future-noir detective. 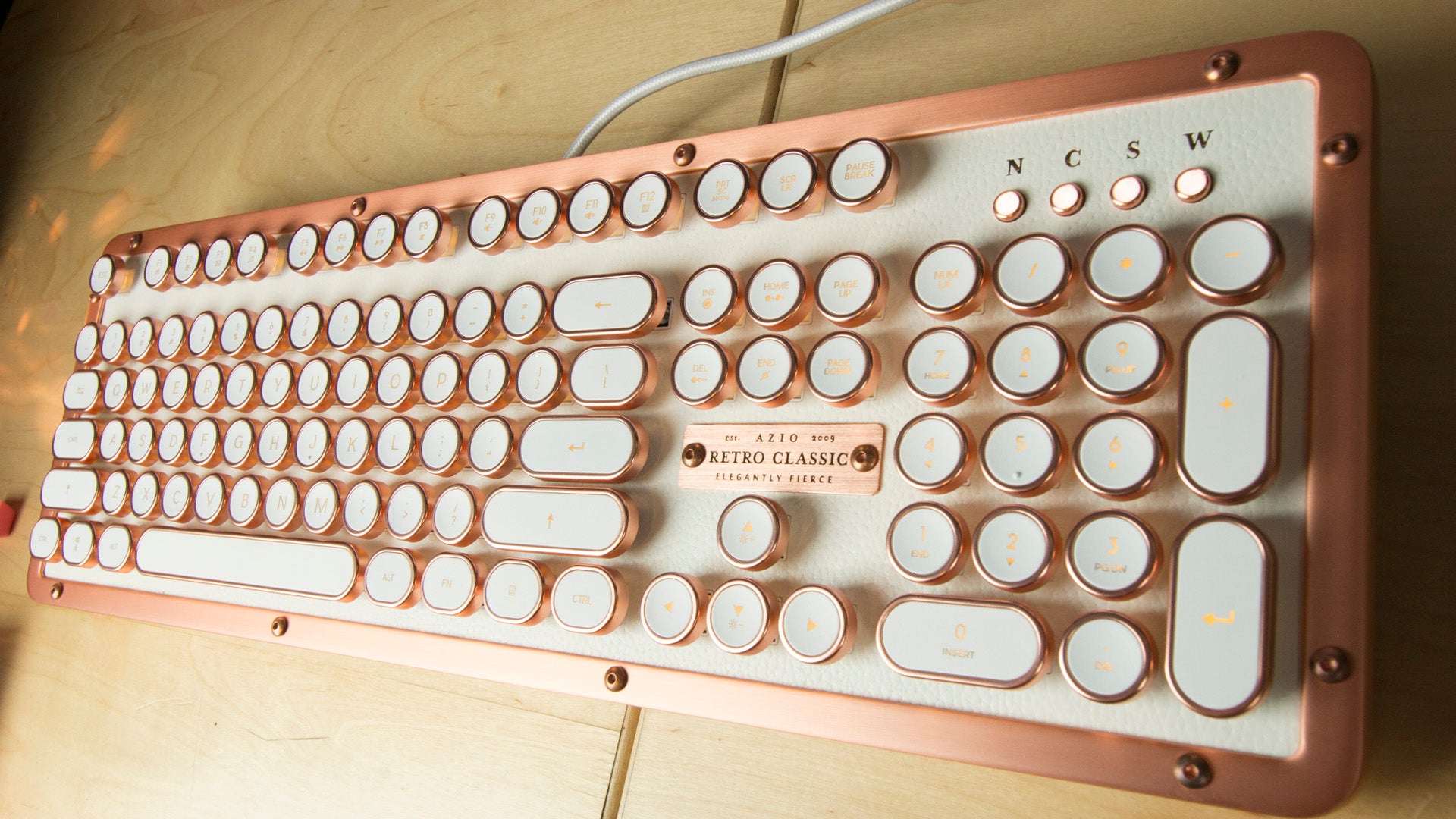 Azio is currently winding down a successful Indiegogo campaign for the Retro Classic, where it’s offering all three colors in both wired and Bluetooth varieties. We’re reviewing the wired Posh (white and copper) model.

Well Just Look At It: I mean really, look at it. The color scheme on this particular unit might not be up your alley, but this is a damn pretty marriage of new tech and retro design. 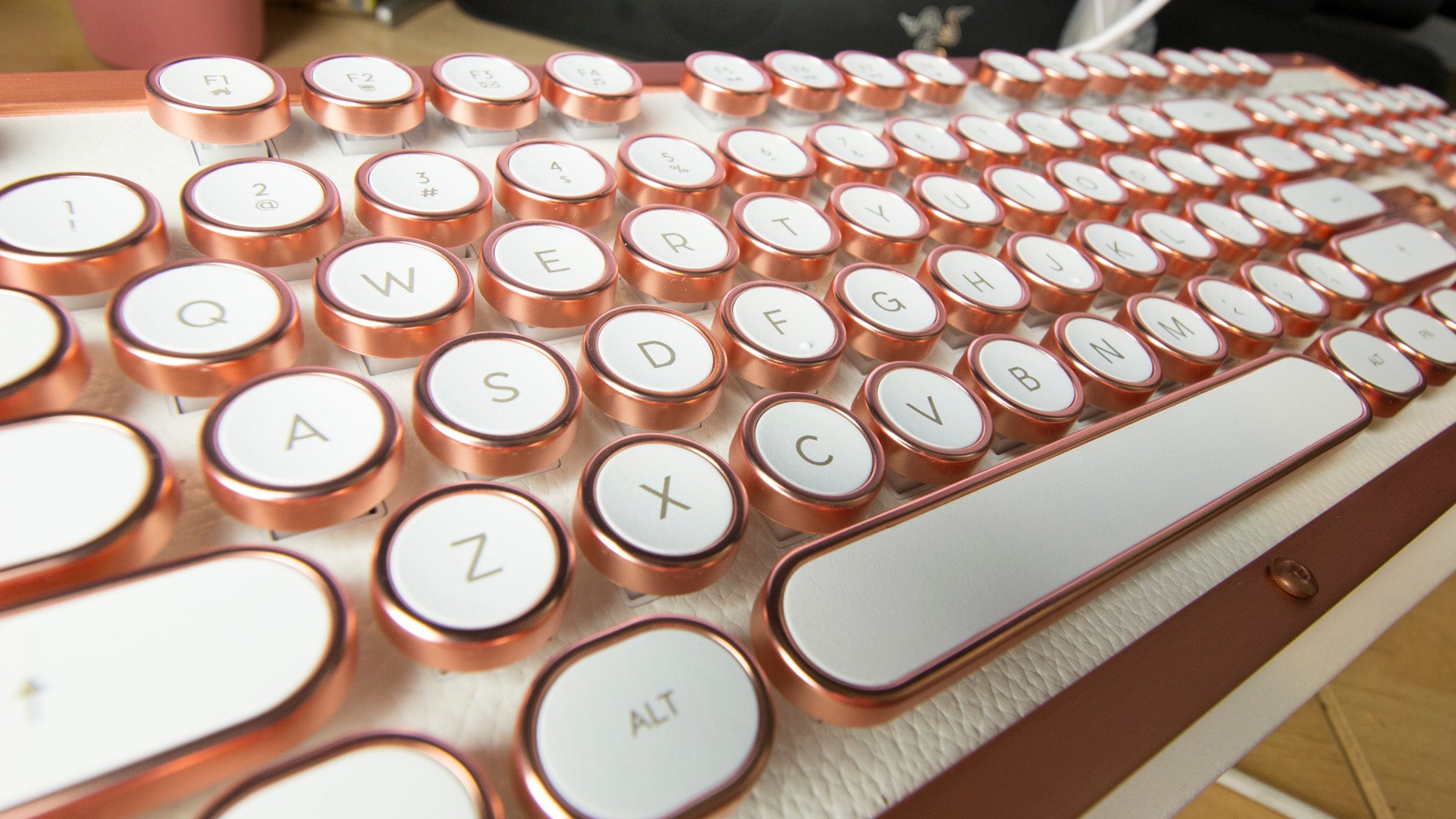 Of course beauty is in the eye of the beholder, so you might hate it. I dig it very much. I think it’s keen. I am rapidly running out of period slang. Gee whiz.

Sturdy As Hell: The zinc aluminum alloy frame of this thing is not going anywhere, and with the broad rubber feet (with a clever twist-to-raise mechanism on the rear set) the board is not going to shift on your typing surface. 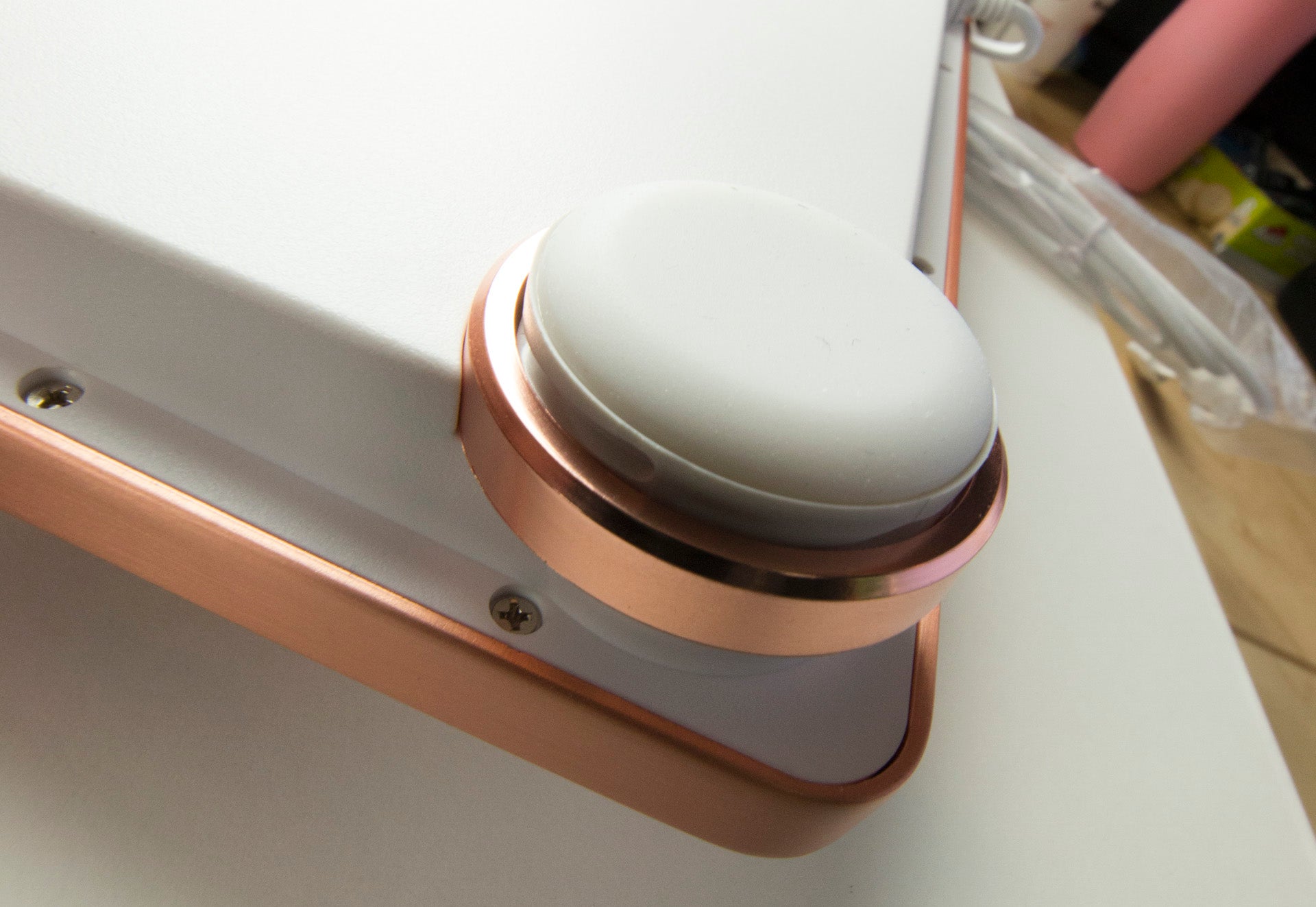 I do worry the white rubber is going to pick up dirt. Maybe I should just keep my desk clean.

So Metal: Speaking of that frame, it’s so shiny and pretty, like a freshly-minted penny.

The alloy used for the frame will not rust, but over the years through normal use and wear it should develop the scuffs, bruises and other marks that give well-crafted metalwork character. I’m looking forward to it.

Smell That Leather: If you are firmly in the ‘animals should never, ever be used for anything other than hugs’ camp, you will hate the plate cover of the Retro Classic. It is real leather, taken from a real animal, cut and placed on this keyboard for the enjoyment of typing people. 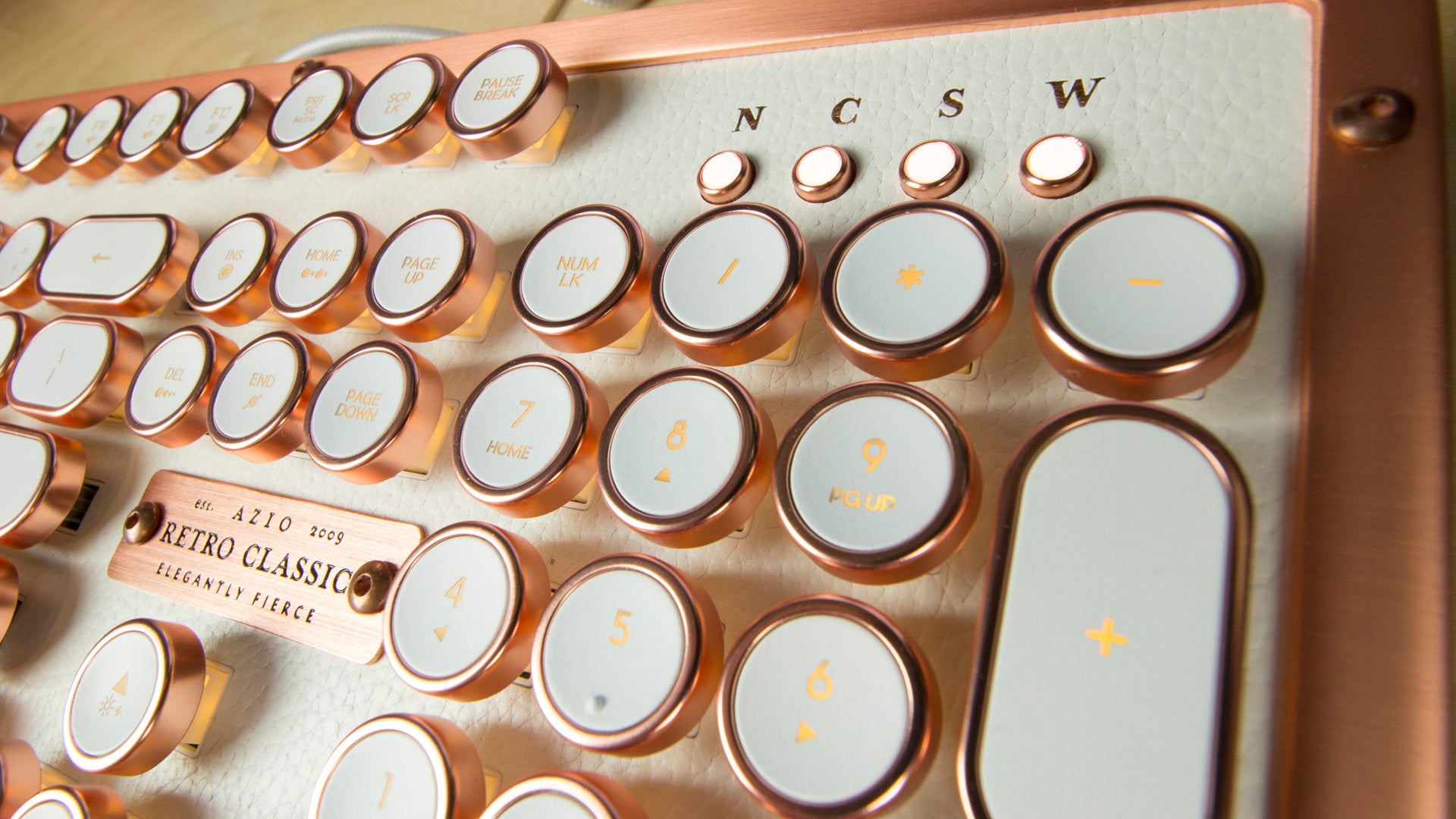 Me? I have never spent so much time sniffing a keyboard. Or running my fingers across the non-key bits. This is some swanky shit right here, folks. That said, it is leather, so if you are messy around your keyboard, you are bound to screw this one up.

Clicky Switches: The Retro Classic’s switches look weird, but they’re actually just a modified version of Kailh’s clicky blue switches. Instead of the standard MX-compatible stem, these feature a hole in the middle to allow the keyboard’s backlighting to shine through the caps. 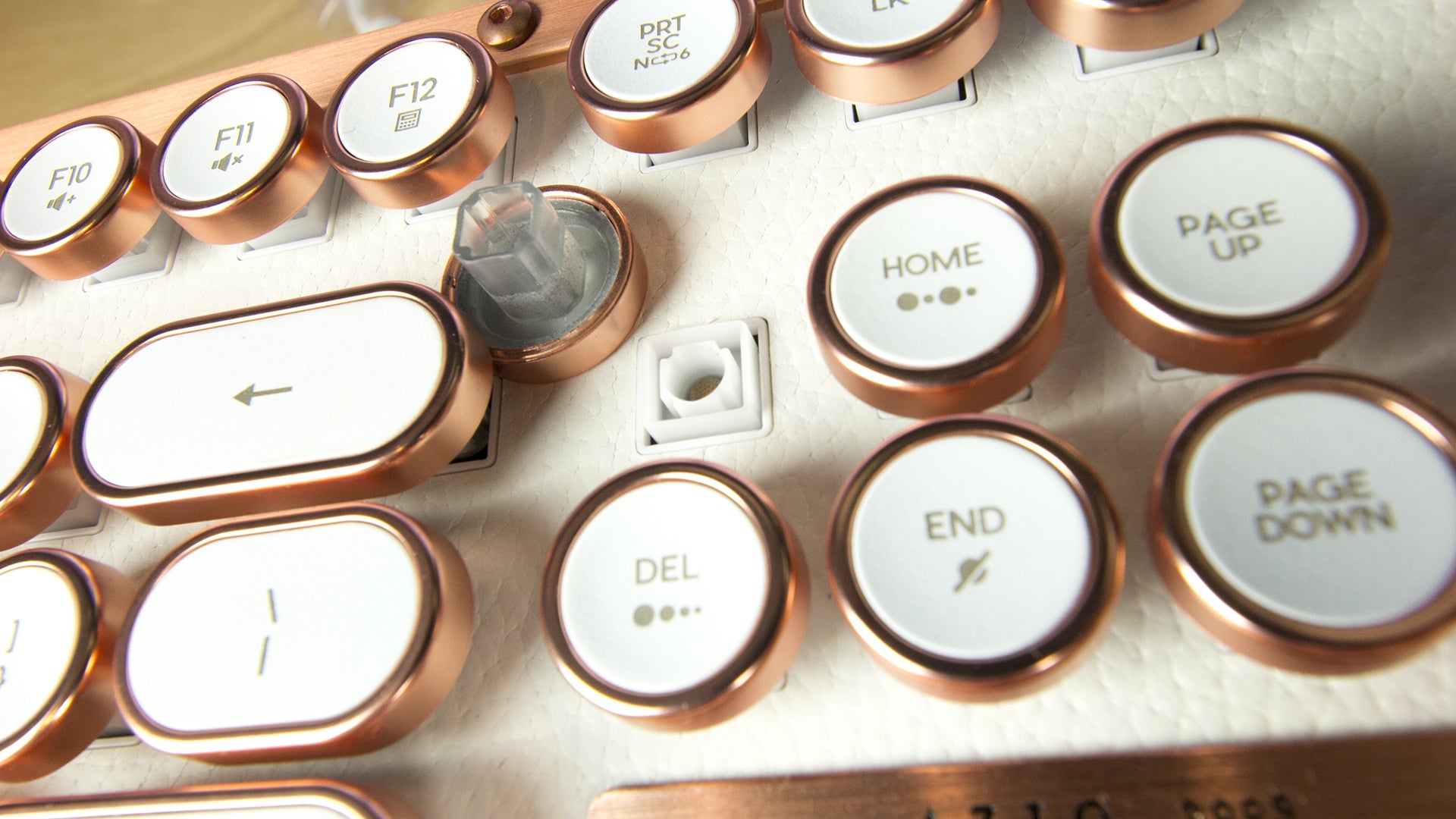 The switches feel nice and relatively smooth. The unique design (similar to Kailh’s line of “box” switches) also means these switches will be much more resistant to dust and other gunk than standard MX compatible switches. 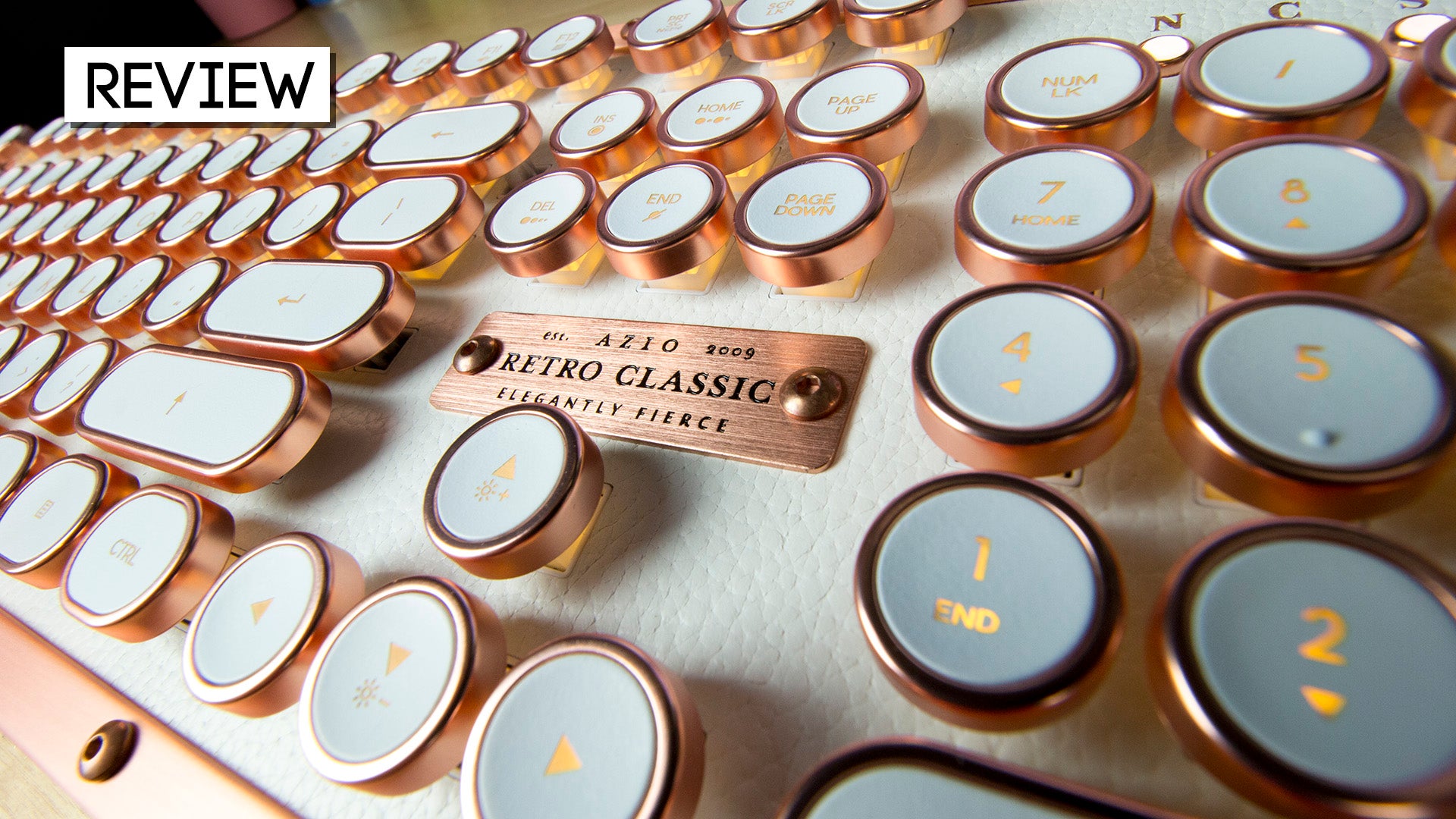 The Caps Are The Weakest Link: They keycaps on the Retro Classic look nice, but there’s something cheap-feeling about the plastic here. Part of that’s because of the flat, rounded design—they’re not going to feel as sturdy and solid as, say, a set of thick PBT keys. It’s also the fact that they’re sitting on top of real leather and gorgeous metal. 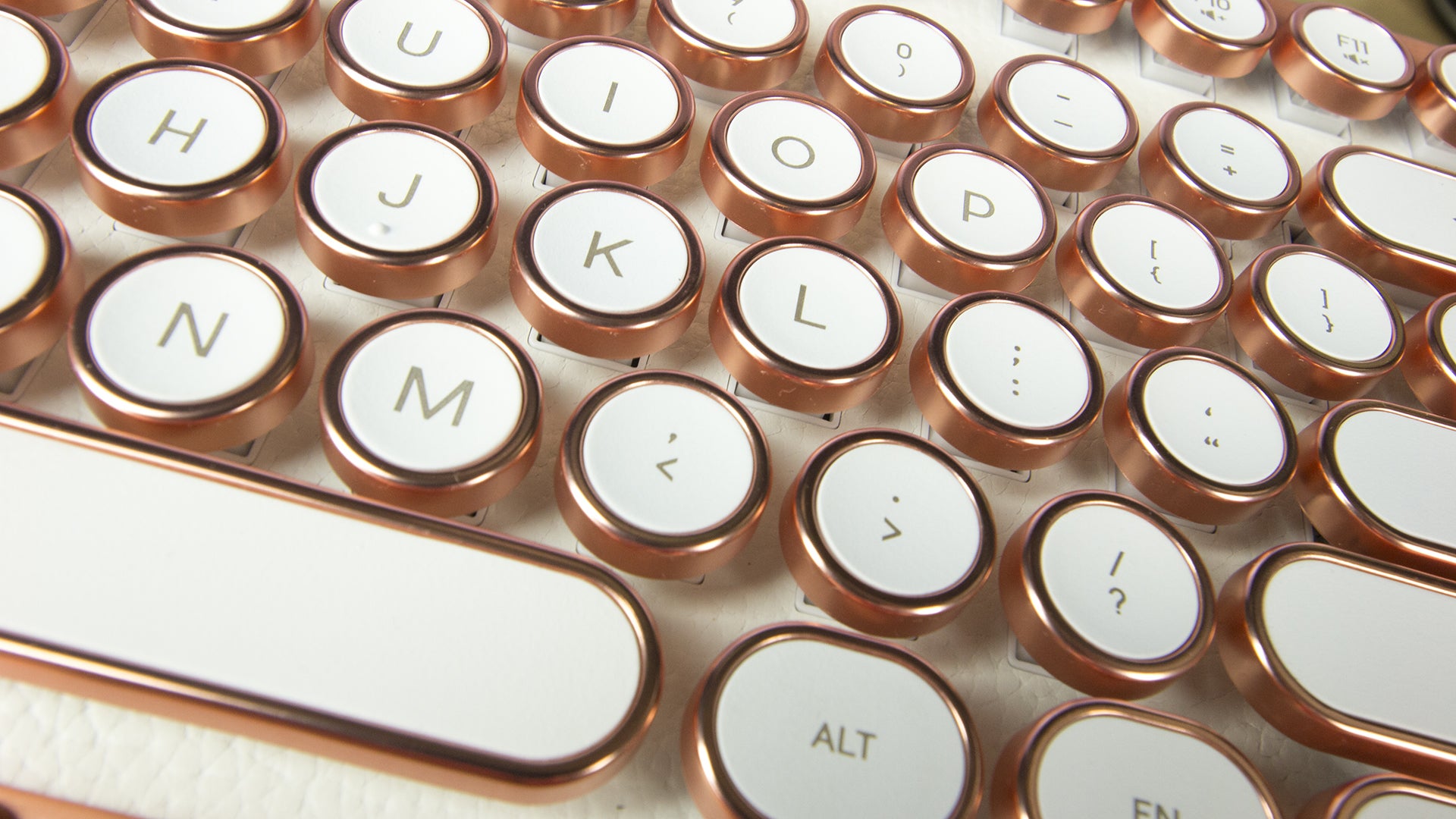 The solution would be to go with metal caps, though the weight would seriously shorten the life of the switches. The plastic keys are probably Azio’s best bet here.

Amber LEDs: Turn off the lights and the Retro Classic looks like something our of a Deus Ex game, which I suppose isn’t a bad thing. 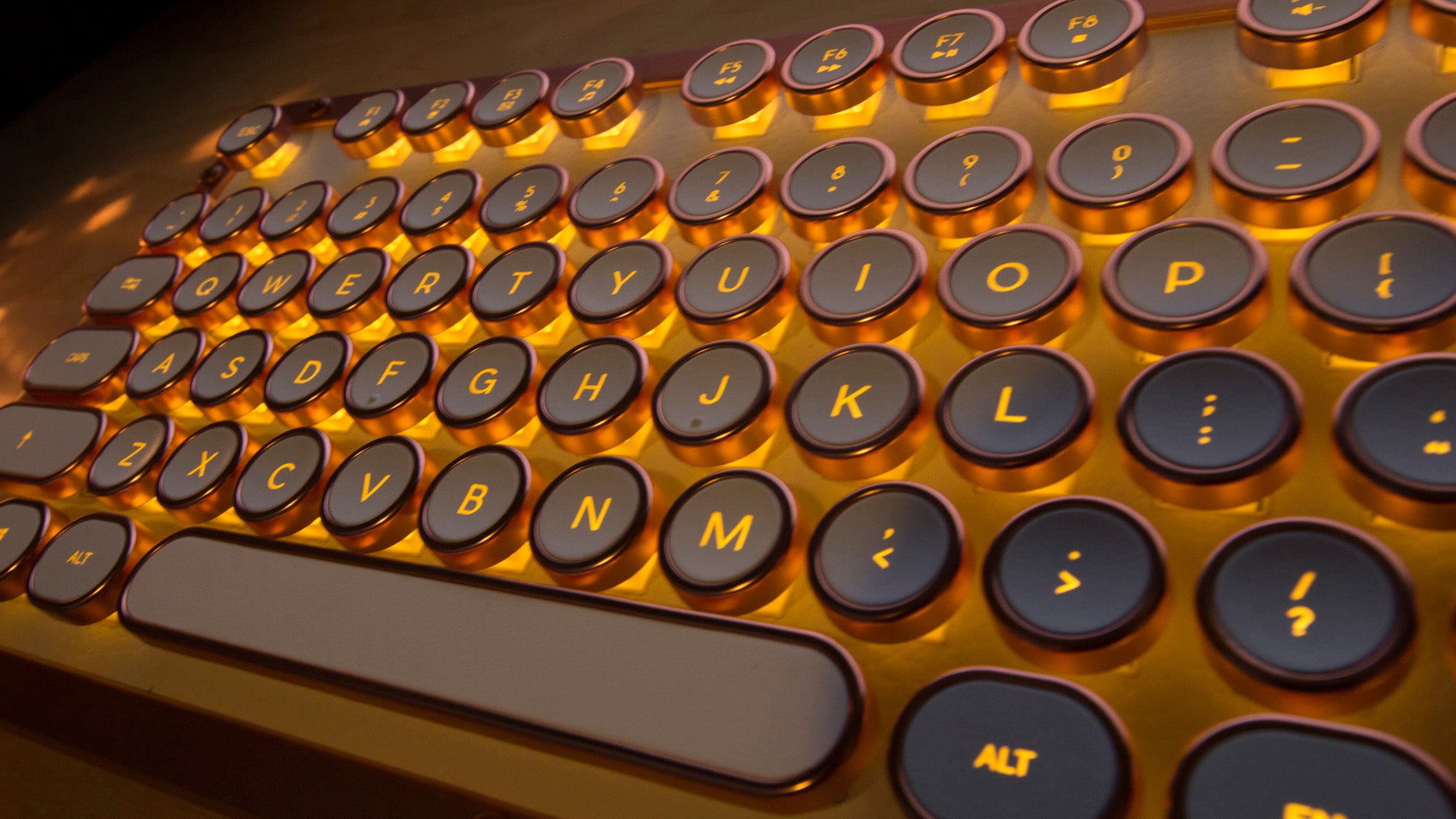 There’s just something about this golden light mixed with the copper tones of the metal that puts me off. I bet it looks great on the black version of the board. Oh well, I can always turn them off.

Did you see those switches? You’re not replacing these keys with anything other than a different set of these same caps (I bet black would look nice on this, now that I mention it).

One has to assume that if you are buying a keyboard like this, you’re buying it because of how it looks anyway. It’s actually nice not having to worry about redecorating. I just like having the customisation section in my keyboard reviews.

The mechanical keyboard world is largely a world of understated rectangles covered with squares and smaller rectangles of varying colors. Azio’s Retro Classic (and the MK Retro before it) proves that there’s still room for circles and curves amidst all the sharp angles. 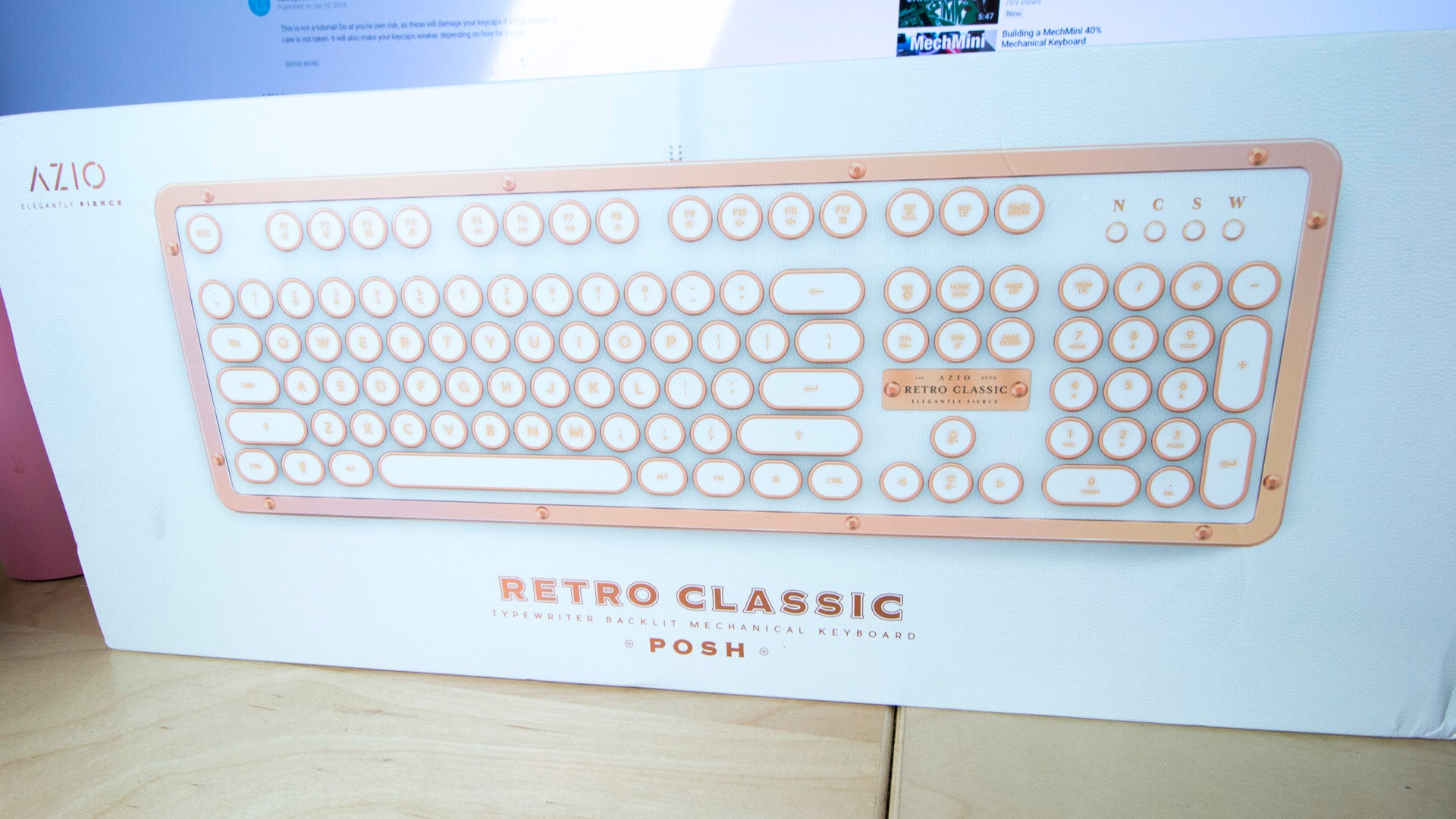 Not only is it all fancy, it’s also more approachable to keyboard users who have yet to fall in with the mechanical crowd. My wife, who at best tolerates my keyboard enthusiasm, took one look at the Retro Classic and asked if she could use it when I am done with it.

Now that I think about it, she doesn’t even have a computer, doing all of her online stuff via tablet or phone. Great. Now I have to buy her a PC. Thanks a lot, Azio.