Maybe you’ve been to Japan or plan on going. Perhaps you recently moved here, or it could be that you’re simply interested in the country. Japanese manners can be complex and filled with all sorts of intricacies that are tricky to navigate. The following tips can help.

What makes manners in Japan such a potential minefield for even Japanese people is that there are high expectations placed on how one should act. It’s not that there is simply a correct way, but there is an expected way.

The good news for foreigners is that Japanese people don’t really expect too much! The expectations are so low that Japanese people sometimes compliment foreigners if they can use chopsticks or say a few simple phrases. However, if you do show a level of proficiency in the language and the culture, then obviously you will be graded less on a curve and more will be expected of you. This can be both challenging and exhilarating, as well as stressful.

As long as you’re not being an arsehole, walking on tatami mats with your shoes on, bothering other people, or breaking the law, the vast majority of Japanese people will be obliging. Basically, if you act like you do at home (I’m assuming you’re a nice, responsible person!), then you should be fine.

But let’s say you’d like to dip your toe in the world of Japanese manners and make an effort to delve deeper into the culture. Great! Here are some helpful tips and relatively easy manners to guide you on your way.

- If you got to public bath or a hot springs, do not wear a bathing suit. In some countries you wear swimwear in the hot springs, but in Japan, you get naked with strangers.

- Wash your body before you get into the bath. Don’t dunk your head under the water in the bath or splash about. Once you get out of the bath, if the water has therapeutic qualities, it’s not recommended you hit the showers again.

- In Japan, people bow when they greet others or say goodbye. They bow during ceremonies or when class starts or ends at school. They bow at Shinto shrines. If you don’t live in a culture with bowing, you might be surprised at how much of it happens in Japan.

- There are several different angles at which people are supposed to bow. Unless you work in an office or in the service industry, you can probably get by with a 15 to 30 degree bow.

- If you are not sure or comfortable with that, a slight head bow should suffice in informal situations, which, if you are on vacation, will be most of your interactions.

- When bowing, keep your hands at your side (or thereabouts) and keep your back straight. For a more in-depth look at bowing, Tofugu has a handy guide.

- When someone gives you a business card, receive it with both hands. Likewise, if you give someone your card, do so with two hands.

- After you get the business card, look at it momentarily, because that’s more respectful than simply stuffing it in your pocket. If you are meeting with someone at a table, keep their business card on the table next to you where you can see it. Do not forget it when you leave.

- Do not write on people’s business cards. It’s considered rude.

- Do not pull apart disposable chopsticks with your teeth. It’s seen as uncouth.

- Do not stick them in the middle of a bowl of rice. It looks like a Buddhist funeral ritual in which chopsticks are left standing up in a bowl of rice. As you can see in this photos from Yahoo! Japan, the rice is tightly packed and perfectly spherical, explaining why in Japan rice is not served to living people like this. 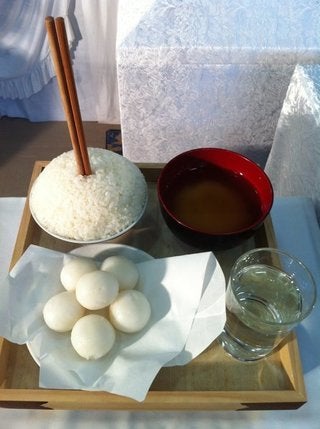 - Do not lick your chopsticks. This is called “neburibashi” (ねぶり箸), which means “licking chopsticks.”

- Do not stab your food or point at things with your chopsticks.

- Do not pass food directly from one set of chopsticks to another. The reason is related to another Buddhist funeral ritual: After a body is cremated, the family picks up the bones with chopsticks and passes them directly to another family member, from chopstick to chopstick. These bones are placed in an urn.

- If you can’t use chopsticks, it’s okay to ask for a fork or spoon.

- Pour other people’s drinks. If you are eating or drinking with others, stay aware of their drink levels. If you’re drinking beer or sake, offer to pour their drink. They will pour yours in return. This is also true for non-alcoholic drinks like tea and water. The reason why this is considered good manners is that it shows you are paying attention to others.

- Clean your plate (even all those little bits of rice). In some cultures, it’s okay not to eat all your food. In Japan, it’s frowned upon.

- Don’t eat or drink on the train. This only pertains to subways or urban trains, which are crowded. You might spill your drink or the smell of your food might disturb others. People do eat and drink on the bullet train and during long rural train rides. Stations sell what are called “eki ben” (駅弁) or “station bento.” Buy one, some tea or alcohol and enjoy your trip!

- Before you eat, put your hands together. Everyone will say “Itadakimasu.” You can, too! It literally means “I humbly receive,” but as Tofugu points out, it’s also compared to “Let’s eat,” “Bon appétit,” or “Thanks for the food.” After you finish eating, put your hands together and say “Gochisou sama” or “Gochisou sama deshita.” Simply put, it means “Thank you for the meal” or “That was a feast.”

- For whatever reason, if you somehow end up serving Japanese people rice, do not pack it tightly into the bowl, forming a perfectly spherical top. As mentioned above, this is how rice is prepared for the deceased at funerals.

- If you visit someone’s house, take a small gift. Cookies or cake typically go over well. If your host drinks, liquor is good. Small souvenirs from your home country could be good, too. Japanese people tend to give each other things they can use: soap, towels, and the like.

- Whenever you give people something, make sure that it’s in a bag or a box. Wrapping culture is pervasive in Japan: You’ll buy individually wrapped cookies that are put into a box that is then wrapped and then put into a paper bag. Your wrapping doesn’t have to be complex or ornate; in a pinch, the bag the item came is is fine. Getting gifts that aren’t wrapped or in paper (or even plastic) bags won’t offend anyone, but it’s typically not done.

- When you get a gift, or when you receive anything, use both your hands to take the item.

- Thank you notes are not necessarily expected, but they are appreciated, especially in today’s Japan where there is less and less of the written word. If someone is especially kind during your time in Japan, a small gift might be an appropriate way to say thanks. Don’t worry about writing it in Japanese. The gesture is of gratitude is universal, and if you live abroad, most Japanese people still get a kick out of getting international snail mail or postcards.

- Take them off inside. Right as you step inside houses or buildings, there are entrance areas called “genkan” (玄関). Here you will take off your shoes. Make sure your shoes are lined up together side by side. If there are small lockers, put your shoes in them.

- After you take off your shoes, there will sometimes (but not always) be slippers. Put them on. If you go into a room with tatami mats and have slippers on, take off your slippers before entering. You can only walk on tatami with bare or stocking feet, because slippers and shoes can destroy the mats.

- Don’t wear socks with holes in them while in Japan. People will notice. If there are small children nearby, they will point it out. Repeatedly.

- Cover them up, if possible, out of politeness. Summers are brutal in Japan, so that might not be doable or realistic during that season. If you are meeting someone in a business or rather conservative setting, however, do keep them covered. Those who work in the entertainment industry, sports, or the arts will get a pass. Generally speaking, foreigners get a wider berth regarding tattoos than Japanese people do, but prejudices still exist. (More on Japanese tattoos here and here.)

- It’s “arigatou” or “arigatou gozaimasu.” If those are too hard to say, just say, “Thank you.” People will understand because “san kyuu” (サンキュー) is an English loan phrase meaning “Thank you.”

- You do not tip in Japan, and it’s not expected.

Visiting a Shrine or Temple

- Shrines are Shinto. The rules are more complex at shrines than at Buddhist temples. For instance, at shrines, you clap when greeting the deity, but at temples there isn’t clapping. For more on what to do at shrines, the Japan National Tourism Organization has a helpful guide.