Razer’s Blackwidow line has been carving out spots in best mechanical gaming keyboard lists for years now. And why not? It’s got a striking look, it’s all sorts of programmable, it’s got USB and audio pass-through and some of the finest RGB lighting in the business, if you’re into that sort of thing. Introduced in January of this year, the Blackwidow Chroma V2 is all of that with a free wrist rest and a move from the horrible proprietary Razer font (an upside-down L is not an R) to something nice and legible.

The other big change that came with the Blackwidow V2 is the introduction of a third color of Razer key switch. They’ve had the clicky greens and the tactile oranges (Tactile Oranges is the name of my REM cover band). Now we have the linear yellow switches, smooth keys with short actuation points.

Here’s Razer’s clicky green switch. Comparable to Cherry MX blue switches, when the key is pressed the slider encounters brief resistance before snapping free, creating the clicking noise. Tactile keys, like the Razer orange or Cherry MX browns feature the bump without the snap, providing a bump that is more felt than heard.

Instead of a pronounced bump, a linear switch’s slider is sloped, providing increasing resistance as the key is pressed as opposed to a click or bump. While this makes linear switches quieter in general, the lack of feedback also means it’s easier to bottom the key out, leading to even more noise. 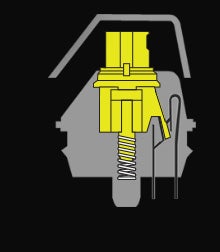 The Switches Are Nice: With a feel that’s somewhere between Cherry MX reds and blacks, the switches have a very nice play to them. Smooth and never scratchy, though I do get a little bit of spring noise from time to time. Not enough to drive me insane, but enough to remind me that springs are a thing. 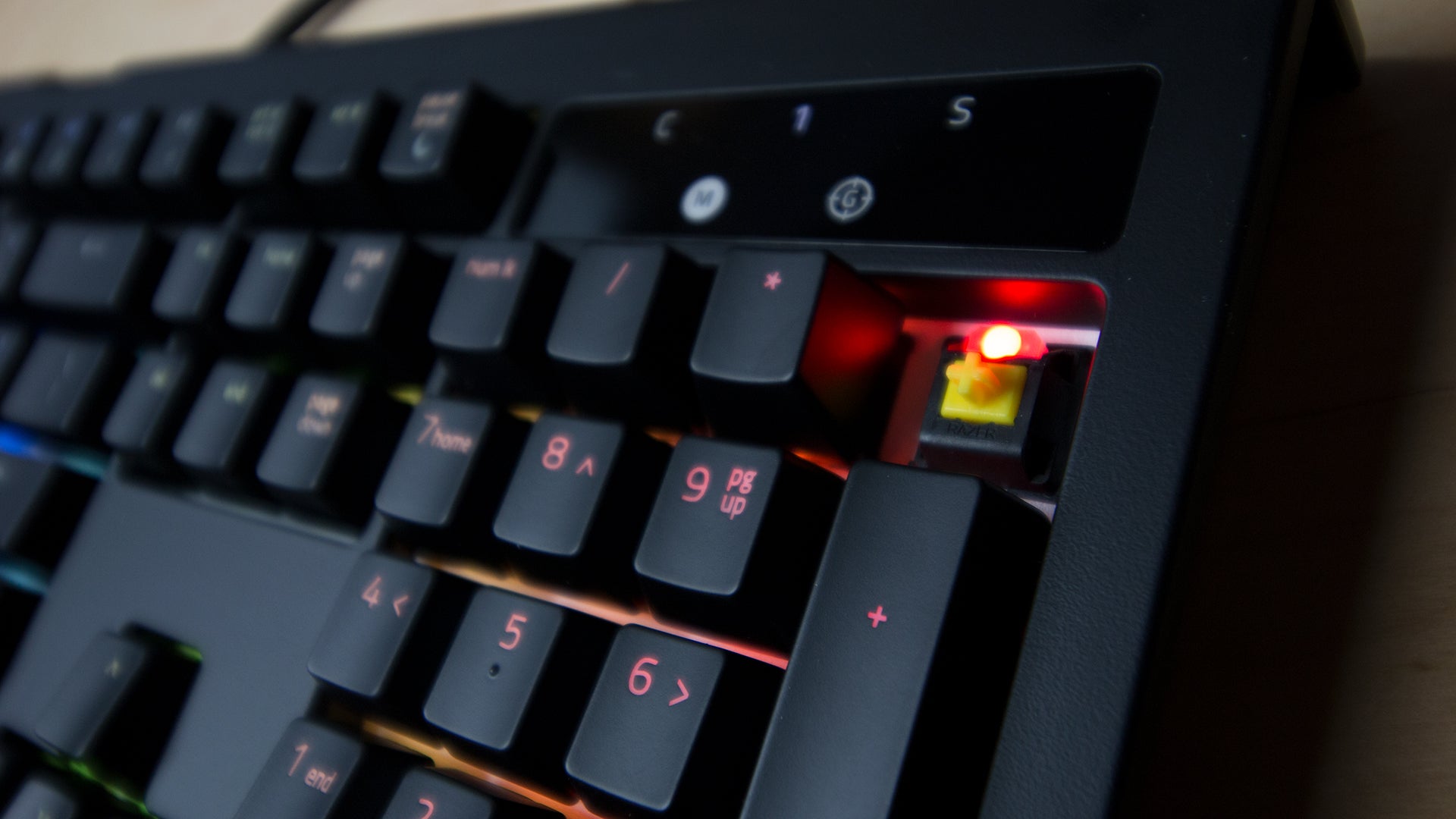 It’s A Nice, Solid Board: The Razer Blackwidow Chroma V2 will not crumble apart in your hands when you touch it, even if you touch it very hard. If it does crumble apart, then you’ve touched it too hard. Stop touching things so hard.

All The Programmable Stuff: You want macro keys? You’ve got five dedicated macro keys. You want to create custom profiles tied to particular programs and save them on the cloud so you can download them to whatever computer you are playing on? Knock yourself out. Razer’s Synapse software is some of the friendliest in the gaming keyboard market. 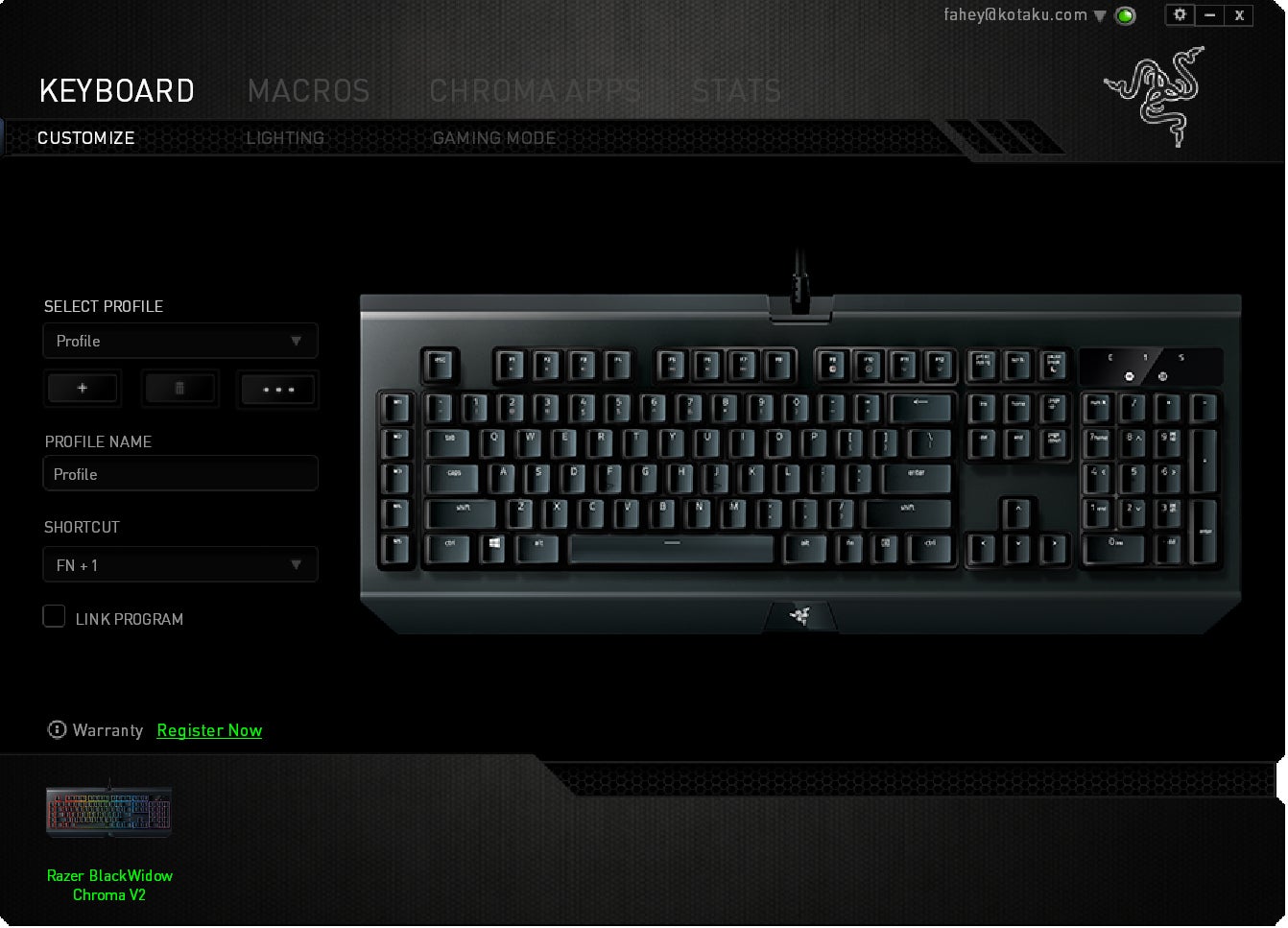 That Chroma Lighting: I mean, we have to talk about the Chroma lighting, right? You wouldn’t get a keyboard called the Blackwidow Chroma without the lighting being a concern. It’s quite nice. All the colours, all the modes, different brightness settings. More and more games are coming out with custom Chroma settings that use keyboard lights to enhance the gaming experience, which is fun. 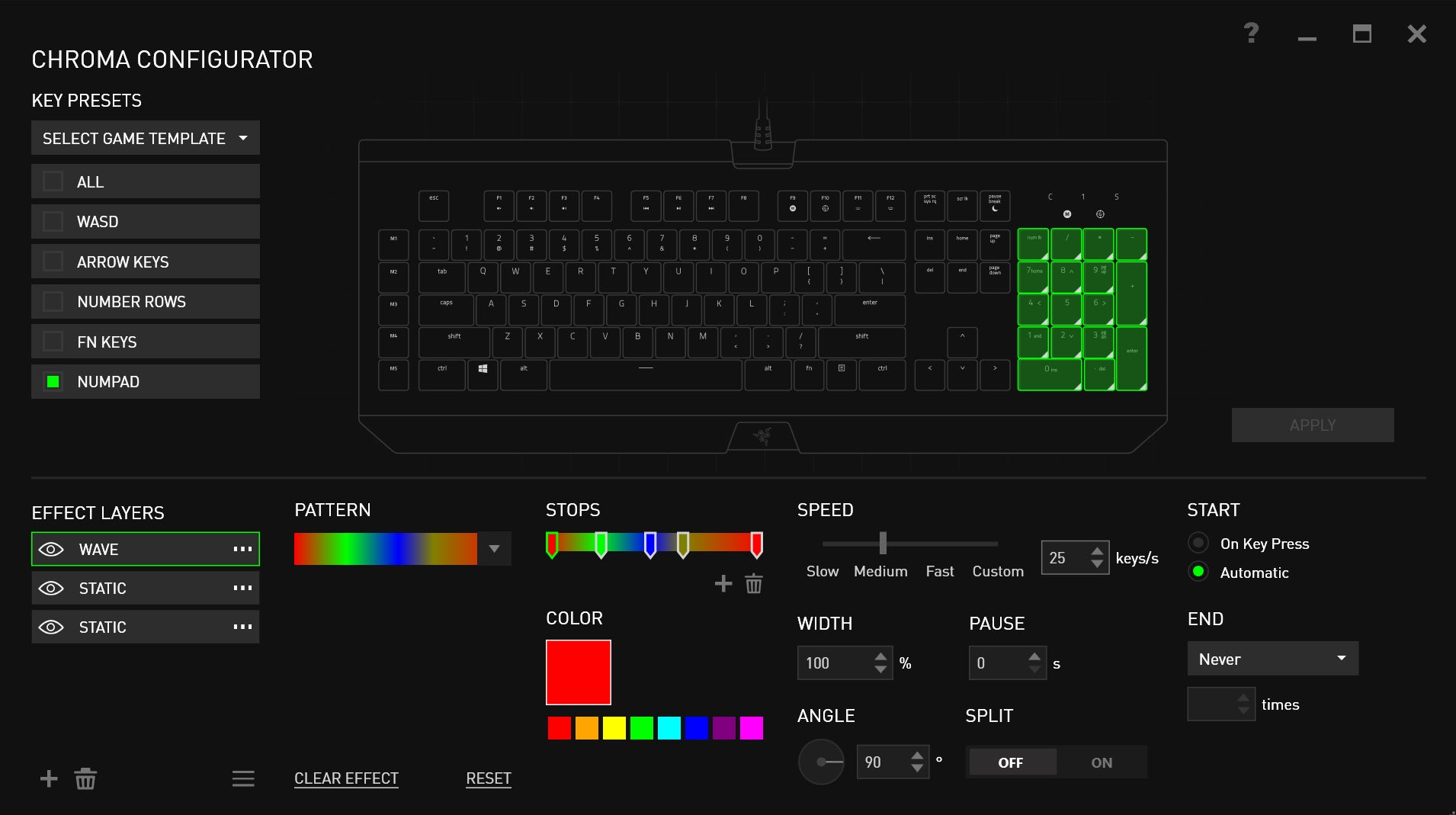 Why buy an expensive set of replacement keycaps when you can completely customise the colour of every light on every key? Because buying keycap sets is awesome, that’s why. Still, you can do this.

Free Wrist Rest: Not just a free wrist rest, but a free wrist rest with a faux leather feel that’s quite comfortable and attaches to the front of the system with magnets so you don’t have to bother with little plastic hook bits. 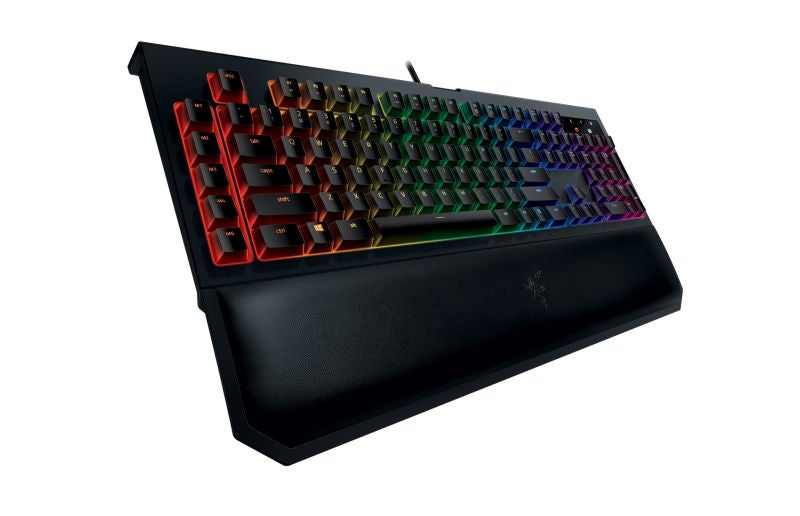 I know, real keyboard enthusiasts don’t need magnets. I type violently. I can use the help.

Everyday Typing: I was on the fence about linear switches for typing before using the Razer Blackwidow Chroma V2 with yellow switches for a week and a half. I like the feel, but my typing tends to go out the window due to the lack of feedback. Coupled with the shorter actuation distance of the yellow switches, my error rate has gone through the roof, sending me running back to more tactile keys like Razer’s orange switches.

This Damn Cable: I do appreciate USB and audio pass-through, especially on a gaming keyboard. Headset, mouse, done. But when I need a cable at least three times the thickness of a normal braided cable to do that, maybe not. 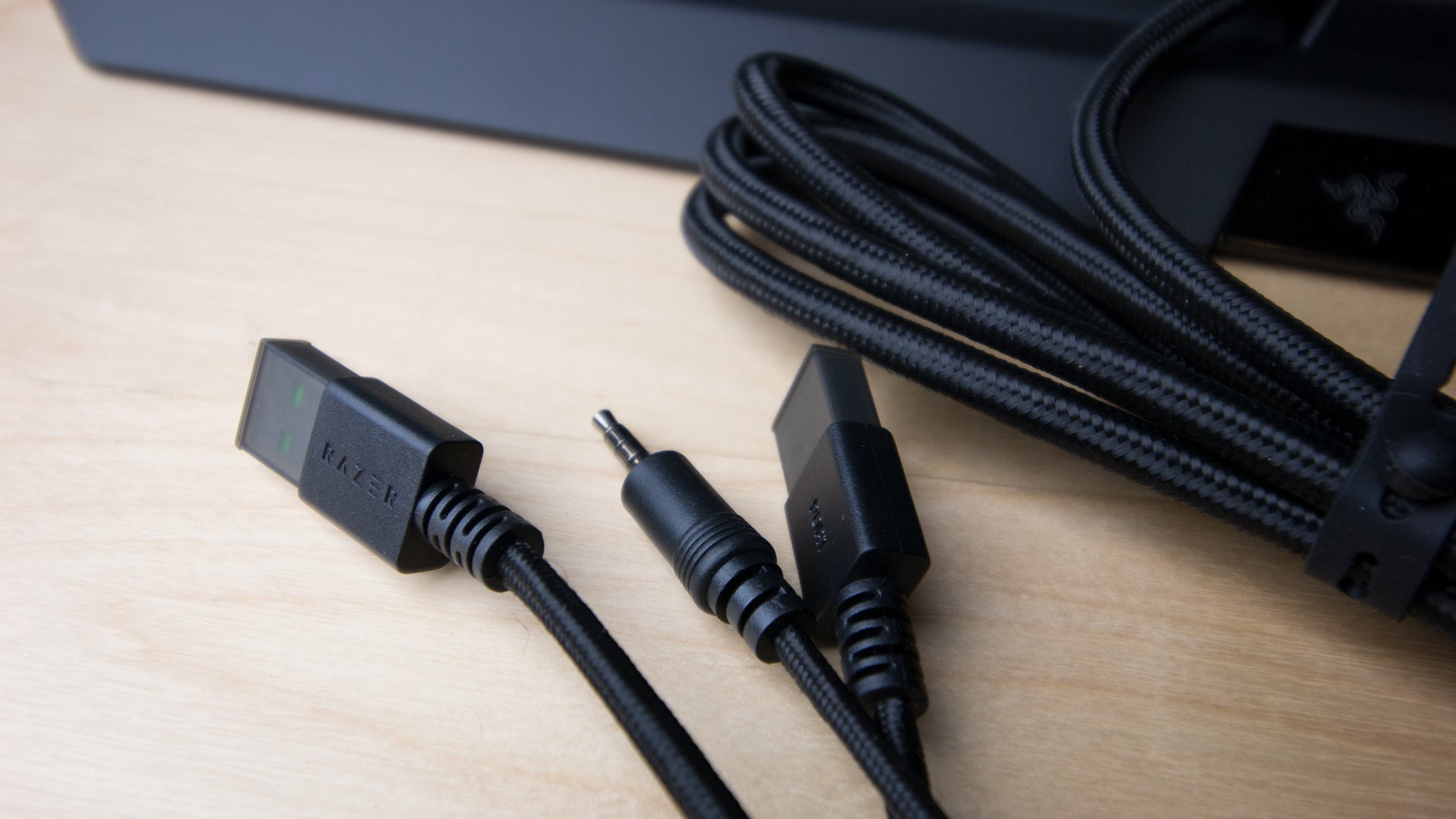 I am not saying they should do away with the feature completely. Maybe make the cable detachable and give the option of using the pass-through feature or not. The keyboard cable is the most prominent thing on my desk next to the keyboard itself, and it annoys the hell out of me.

The Razer yellow switches, like all the Razer switches, feature the same cross-shaped stem as all the Cherry MX style switches, so the sky is the limit as far as keycap choices go. The bottom row features a 6.0 space bar layout with single key-sized function, windows and menu keys. The only thing to worry about is the five macro keys along the side. Maybe get some blanks for those. Or maybe some nice artisans. 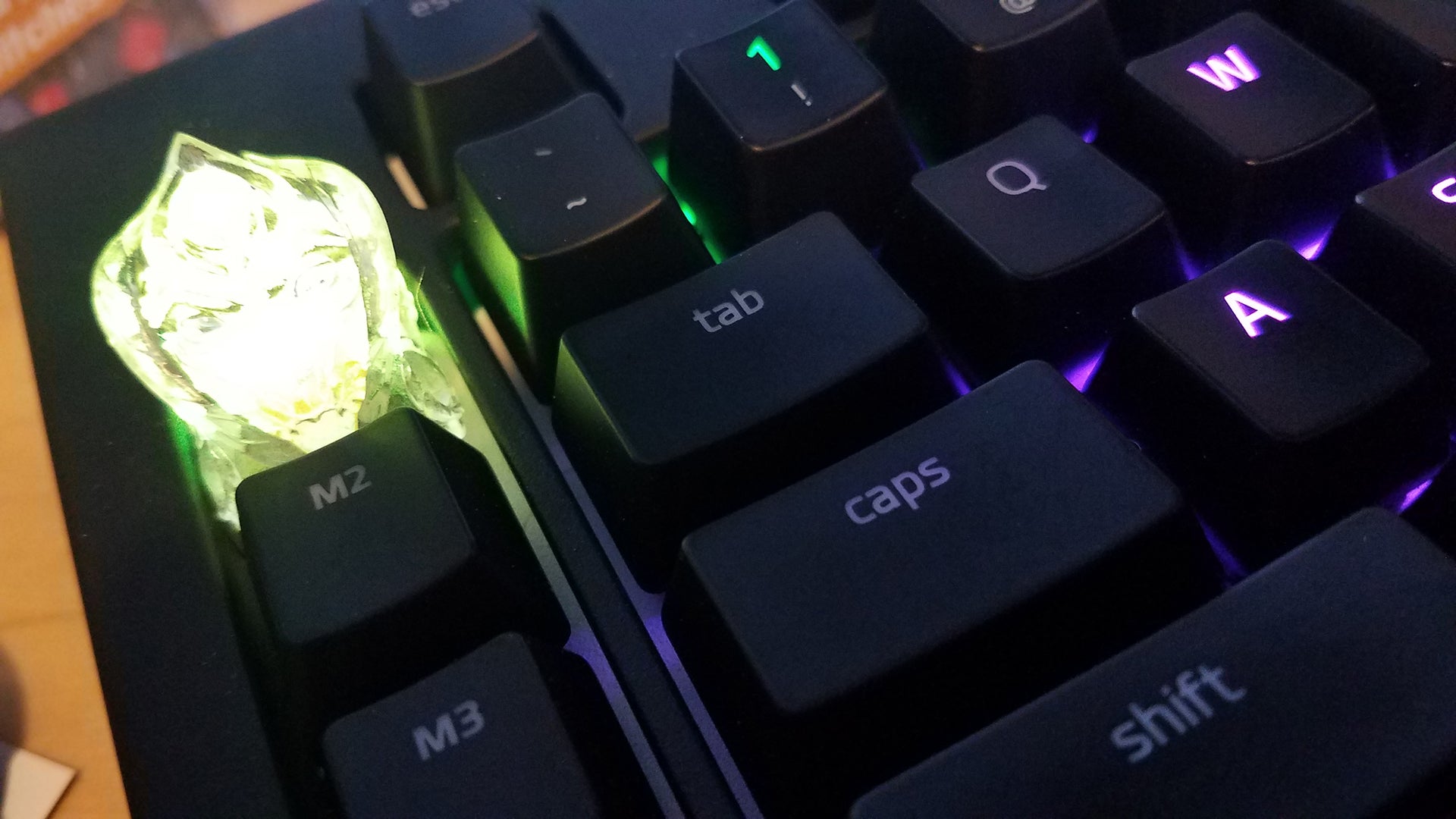 Oh, and if I were you I would go for shine-through keys. You’re paying for that Chroma, you might as well get the most out of it.

The Blackwidow Chroma V2 is a fine gaming keyboard, packed with the essential and non-essential features gamers look for in a means to feel superior to people exclusively using gamepads. The question is which switch to pick for your purposes.

As a person who writes about video games and snacks for a living, I require a combination of fast and accurate typing and enough gaming performance so it looks like I vaguely know what I am doing. That’s Razer oranges or MX browns. The Razer yellow switch is built for people who turn on their computer to play games and then turn it off when they are done. Or just leave it on and walk away to get a sandwich. They aren’t composing soliloquies, or if they are they are using a quill and parchment like a civilised person.