The Tattoos Of Yakuza

In Japan, tattoos and the yakuza often seem inseparable. Not every gangster has a tattoo and not everyone with a full bodysuit is a gangster, but when pop culture depicts the underworld, anti-heroes come fully inked. Case in point, the Yakuza games.

Skin deep, they are not. But the same goes for Japanese tattoos, which have a long, complex history that connects them to so much of the country’s culture—even, if mainstream Japan often wants little to do with them.

[Image: paladinlord47] This is the “tebori” or “hand-poked” method. Today, most tattooers practising tebori do the initial outlines with a tattoo machine because it’s easier to pull straight lines and then do tebori for colouring and shading.

What makes Yakuza’s tattoos especially fascinating is the care and attention they’re given, seen by the fact that Sega brought in Horitomo to do designs. Plus, throughout the series, Yakuza’s developers have used tattoos to provide characterisation or highlight the relationship between friends—or enemies.

In Yakuza 0, for example, we see Kazuma Kiryu and Akira Nishikiyama with sujibori, the non-coloured in outlines of their tattoos. Their tattoos, and, for that matter, their stories are just getting started.

[Image: cninr] In the upper right of Dojima’s koi fish tattoo, there is a tattooer’s seal for the artist to sign the work. Colour is typically inked last once the piece is completed.

In my book Japanese Tattoos: History*Culture*Design, which I co-authored with Osaka-based tattooer Hori Benny, I write about many numerous motifs, getting more in-depth about the country’s tattoo tradition. But let’s take a brief look at some of Yakuza’s characters and their ink.

The koi symbolises strength and bravery. The fish is closely connected to the dragon, because there’s a legend about koi swimming up the Yellow River in China, passing through the rapids known as the “Dragon’s Gate,” and turning into a dragon.

As with Kiryu’s dragon, this is piece is done in the nukibori style, meaning it is sans background. Also, the design shows an ascending koi, which, thematically in the Yakuza storyline, underscores the character and his relationship to the franchise’s protagonist. 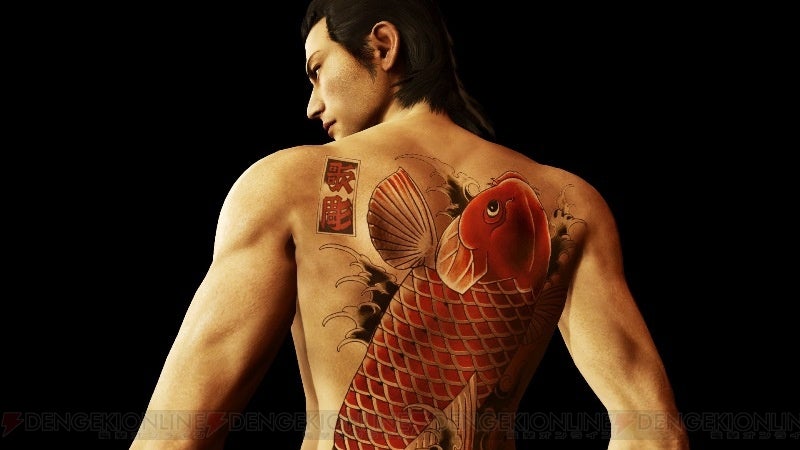 Dojima’s back piece depicts Fudo Myoo, an intimidating defender of the Buddhist faith. His name means “Immovable Wisdom King,” sitting upon rock throne. The sword represents knowledge and power, while Fudo Myoo binds evil with the rope in his left hand.

Fudo Myoo is surrounded by flames, which represent cleansing. In Esoteric Buddhism, there are cleansing fire purification ceremonies to destroy negative energy during which this deity is evoked.

Majima has a large, fearsome white Hannya mask and a white snake. It’s unclear whether or not the mask’s “Hannya” moniker refers to the name of its original carver or to word “hannya” (般若), meaning wisdom. Depending on the angle from which they are viewed, Hannya masks can express different emotions. This head-on view, however, in Majima’s tattoo is particularly terrifying.

In Noh theatre, red Hannya masks are usually for lower class characters, while white ones are usually for upper class ones. White snakes, however, symbolise good fortune, and there are even Shinto shrines dedicated to them. Snakes emerge from hibernation in the spring, which is why they are often paired with spring blossoms that symbolise the beauty and fleeting nature of life. However, since snakes shed their skin, they were seen as immortal in the past, making a fascinating comparison between the short-lived blossoms and the seemingly eternal snake.

The layout of Majima’s tattoo is called hikae and covers shoulders and arms (depending on the wearer’s choice, the length of the sleeves can vary). “Deep” hikae designs will cover the breast, extending over the nipple, while “shallow” ones will not.

Notice how this underarms are not tattooed. There are two reasons for this: One, the inner arm is one of the most painful areas to be tattooed (along with the inner thigh), and two, in the past, criminals received punitive tattoos that covered the arm’s inner area. That’s why tattoo enthusiasts in the late 19th century would leave that section open, to show that they were not covering up punitive work. In short, this became a way to show one was tattooed out of free will.

Since then, it has become part of the basic layout vocabulary for Japanese tattoos. Today, some leave this area untattooed, while others do not for a variety of reasons, including simply aesthetic ones.

The protagonist of the Yakuza series, Kazuma Kiryu sports a dragon tattoo on his back. This design is a nobori-ryu (“ascending dragon”) motif, which is prevalent in Japanese tattoos. Kiryu’s tattoo does not have any background, and this style is called nukibori.

Dragons are one of the four legendary creatures in the Chinese tradition. They are believed to control water and rule the sea as well as the air. Japanese dragons are traditionally three-clawed (Chinese dragons have four or five claws), and in its grip, there is an orb with a bonji (sanskirt) character for the Year of the Goat as well as the Year of the Monkey on the zodiac calendar.

While this bonji also refers to Dainichi Nyorai, the chief deity in Esoteric Buddhism. Here, however, it’s for Kiryu’s birth year of 1968, which was the Year of the Monkey. It’s common to use bonji to represent such in Japanese tattoos, especially in dragon designs like this.

Of course a guy name “Taiga” is going to have a “tiger” (タイガー or “taigaa”) on his back! Puns aside, this character’s name is written as 大河 (“taiga”) in Japanese, meaning “great river.” The imported English word “taigaa” can be used to refer to the animal, but the traditional Japanese is “tora” (虎).

Tigers, however, are not native to Japan. The images and ideas of tigers arrived via Chinese art, so for Japanese people centuries upon centuries ago, these animals, while real, were as good as mythical.

Here, we see a typical depiction of a tiger on a rock surrounded by bamboo. The rock represents strength as does bamboo, which is known for both toughness and flexibility. It was also thought that only a tiger could penetrate a dense bamboo forest.

There are way more tattoos in the Yakuza games, and the attention and care given to them helps not only to bring the world to life, but the characters themselves.

In case you missed it, do check out Kotaku’s review of Yakuza 0.