For years now, the latest console generation has been coasting on the idea that more raw power means better games. The PS4’s newest exclusive game, Horizon: Zero Dawn, is the rare game that delivers on that promise.

Awe over sheer technical wizardry and its ability to transport you into a new world. Awe over discovering gargantuan mechanical dinosaurs and gradually uncovering the mysteries of a lost civilisation. Awe over the fact I have never seen so many kickass women in a first party big-budget game, much less this many people of colour in key roles. I often found myself pausing the game just to marvel at it all.

Horizon: Zero Dawn is a third-person action game that tells the story of a relentless young woman named Aloy, who, for reasons unknown, was cast out of the Nora tribe at birth. Instead of accepting her fate as an outsider, Aloy dedicates her life to combat and survival training. Her goal is to participate in a Nora ceremony known as The Proving, as custom dictates that anybody who wins the trial can ask for whatever they want. Aloy intends to find out the truth of her parentage and why she was never given a chance to be a real part of society.

From there, the game sprawls out into a post-post-apocalyptic wonderland of mechanised beasts, ancient ruins, and societies that have lost their knowledge of the old world. The intrigue is immediate in Horizon: Zero Dawn, expertly woven by former lead Fallout: New Vegas writer John Gonzalez. At first, that story was my lifeline, giving me a thread to follow in an open world with an overwhelming number of things to do:

As I explored the terrain before me, I saw a different seduction take hold, eventually compelling me to explore each and every icon on the map. Horizon: Zero Dawn is actually a game about hunting, and your marks are a kingdom of vicious metal dinosaurs:

Each monster has a preferred territory and comes equipped with its own strengths, weaknesses, and attack repertoire. Initially armed with nothing more than a bow, arrow, and spear, you must take on each Goliath before it tears you apart. Horizon: Zero Dawn usually gives you a few options for any given encounter.

Perhaps you are the roguish type who prefers sticking to the shadows, killing your enemies one-by-one without arousing suspicion. Maybe you like to override your foes, making them fight against each other. I preferred running headfirst into my encounters, unloading my ammo however I could—if it hit my target, great! This quickly invited disaster. Horizon: Zero Dawn requires precision and planning, asking you to consider your mark before taking it on. Using a technology called a “Focus,” you can scan your enemies to learn about vulnerabilities, allowing you to direct your attacks with purpose. There is some trial and error involved in learning what makes each creature tick, a quality reminiscent of Monster Hunter.

Horizon’s interlocking combat systems shine once you learn how to prepare for encounters. Before setting off on a quest, I would hunt small game to craft health potions and collect materials for traps. Scoping out the land, I would set up a proximity mine here, or an electronic tripwire there, all in anticipation of my target’s movements. Once I gained enough currency to afford it, I also considered the most appropriate weaponry.

It’s much easier to hit flying enemies by tying them down with a “Ropecaster,” for example, whereas close-combat guns help thwart rushing T-Rexes. Each weapon has its own feel, and while they are all enjoyable to use, I preferred the simplicity of the bow and arrow. Taking aim, pulling the bowstring back, and releasing each individual shot is tried, true, and classic.

Having the ability to infuse weapons with elemental affinities adds another dimension, allowing you to detonate metal canisters with fire shots or freeze your target with ice. Horizon might be an action game, but it requires the mind of a tactician.

Each kill grants Aloy XP, and each level gained grants you skill points. Skill points can be used to unlock new abilities for combat, such as increased damage or the ability to fire multiple arrows at once. I’m fond of the “concentration” ability that slows down time, allowing you to pinpoint specific parts of enemy armour for added advantage. Admittedly there are so many options for approaching combat that I sometimes forgot make use of them until I hit a new wall in difficulty.

Horizon’s story insists that Aloy is an extraordinary woman who does whatever it takes to save the day, but the writing characterising her does not convey that as effectively as the heat of combat. Sometimes, I could feel my heart racing as I made Aloy duck and wave against seemingly impossible odds. In a particularly memorable encounter that took hours for me to grok, I took down an enormous rock worm that had been terrorising a nearby town. At the end, Aloy stood above its smoking carcass. It was dead through the sheer force of her—and my—will. I found myself catching my breath.

The first time you take down any of the game’s creatures is usually remarkable. That novelty fades after repeated encounters with those same types of monsters later in the game. The main Horizon storyline ramps up by throwing more of the same at you, a strategy that technically heightens the difficulty while robbing the mechs of their distinct flavour. Still, the dinosaurs are by far Horizon: Zero Dawn’s crowning achievement, and I found myself exploring new areas of map in the hopes of encountering something I had not seen before. By comparison, fighting humans, which is something players will do a lot, is boring and unwelcome. Unfortunately, Horizon’s main quest relies on those human encounters too heavily. I found myself taking refuge in the sidequests just to avoid other people.

Traversing the world is treacherous, but fortunately Aloy is very nimble. You might draw a comparison to Tomb Raider or Uncharted as you climb structures of dubious structural integrity, or spelunk ruins and “Cauldrons” with hidden treasures. Actually, Horizon seems to borrow mechanics liberally from many other games. The dialogue system feels a little Mass Effect, for example, in that your choices are accompanied with intention icons, and sometimes, there are even future consequences for your decisions. Then there’s the Focus vision, which you can use to investigate scenes more closely, Batman-style. Guerilla Games implements these systems solidly, but none reach the heights of the combat mechanics. They get the job done. 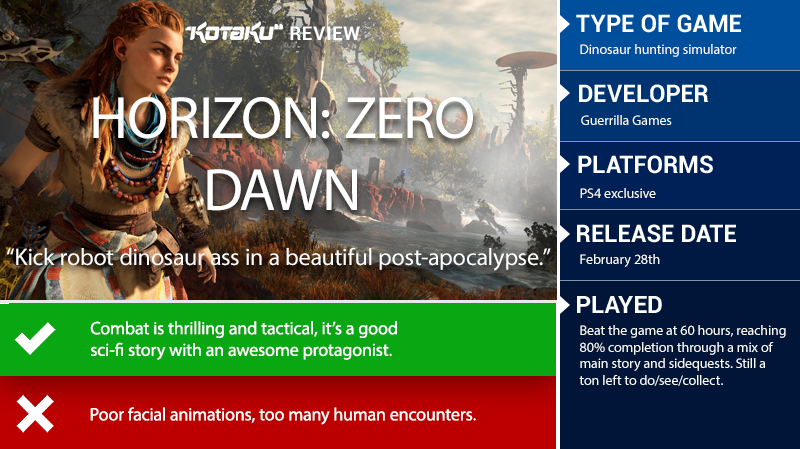 Horizon does shake up one familiar design trope. Many open world games include towers that you must climb to expose the surrounding area, and while those are present in Horizon, a tower in this game is an actual wandering dinosaur.

The game builds an interesting sci-fi world. Even though I anticipated a few of the game’s plot developments, Horizon kept me hooked through believable, flawed characters who live in a world they do not fully understand. It’s curious to hear people theorise about the way the old world used to work: you have tall tales woven around objects like coffee mugs, and religious beliefs formed around technology that seems indistinguishable from magic. It also helps that Horizon’s mix of high-tech and low-tech makes for a killer aesthetic that is further accentuated through the game’s distinct tribes.

The aesthetic richness of the world is undermined by a lack of interactive diversity. I was always thrilled to find new settlements, especially given given the painstaking detail of each individual building block, but I wanted to do more in them. Towns and cities felt more like static dollhouses where I only stopped to save and stock up on supplies. I couldn’t really interact with anybody outside of a few key characters in a meaningful way, nor did Horizon provide locale-defining activities to enjoy. Individual cities feel distinct from each other only in an abstract way, when characters describe the politics going on in the background. You might learn, for example, that one city is currently at war or on the verge of collapse, but you don’t really see or feel any of that while walking through its roads or talking to its citizens. Everything is just a springboard for you to get back into the world to kill dinosaurs, and thankfully, that’s where the game shines brightest.

Instead, where Horizon blew me away was in the majestic and untamed beauty of its canyons, mountains, and open fields. I often found myself booting up Horizon’s robust photo mode just to take stock of it all. This generation has seen its fair share of gorgeous games, sure, but the artistry at work here is staggering. The mere act of walking through this lavish world is enough to make me fall in love with individual rocks and clouds. Horizon provides a compelling case for how, in the right hands, computing power can be leveraged to bring a setting to life. Each area feels distinct and lively through a combination of art direction, and the unique dinosaurs roaming the biomes.

Unscripted moments where different entities would clash with one another in unexpected ways added to the sense of wilderness. Sometimes, I’d stumble upon humans fighting against errant dinosaurs,or watch as robots turned on each other. I observed robotic vultures pick apart the body of another robot. During another segment, I racked my brain trying to figure out how to sneak by some human enemies, only to have a titan unexpectedly swoop from the sky and wreck everyone’s shit. Problem solved! Horizon is at its best when it upends my expectations like that.

At the start of Horizon, most people underestimate Aloy, considering her to be a despicable outcast or nothing more than a pretty face. Aloy’s consequent adventure, then, is a fight against the societal rules and expectations that kept her cloistered for so long. At its heart, Horizon: Zero Dawn is more than just a game about killing giant robot dinosaurs: it's the story of a determined woman who works twice as hard as anybody else just to be accepted. Horizon is the story of a lot of women, really, and the ways in which they reclaim, rebuild and become worthy of an unruly world.

Horizon is not what you may have expected from Guerilla Games. For years, the studio has been Sony’s Killzone factory, churning out first-person shooters set in a grim world. With Horizon, the studio is finally let loose to show us how much more they’re capable of, and what they’re capable of is jaw-dropping.