Razer Blade Pro 2016 Review: The Top Of The Thin Line

Since the 2011 debut of its first super-skinny gaming laptop, Razer has supplemented the Blade line with models either smaller or less expensive than original. Starting at £3,499, the new Blade Pro bucks that trend, resulting in Razer’s the most impressive desktop replacement yet.

PC gamers laughed when the original 17 inch Razer Blade debuted at with system specs easily surpassed by larger, cheaper gaming notebooks, but the Blade wasn’t about power. It was about finding a balance between performance and portability, sacrificing more robust components in order to achieve a game capable system that was under an inch thick.

That balance struck a chord with consumers, and the Blade line began to grow. In 2013 the 17 inch model became the Blade Pro, the base name going to a new 14-inch system that was thinner than Apple’s Macbook Air. Earlier this year Razer debuted the Blade Stealth, an even smaller, skinnier system aimed at the Ultrabook crowd.

Where the original Razer Blade was an exercise in compromise, the 2016 Razer Blade Pro is about seeing how much power can be stuffed inside of a 17 inch wide, 11 inch deep, .88 inch tall aluminium housing without killing anyone. Thanks to engineering know-how, recent advances in computer graphics technology and Razer’s willingness to say “fuck it” to what most might consider a reasonable price tag, the 2016 Razer Blade Pro packs an remarkable amount of gaming goodness into these cramped confines.

The 2016 Blade Pro is a gaming laptop Razer is aiming at being the ultimate desktop replacement machine.

On the outside, it’s the lovely black aluminium housing that’s defined the Blade line since its debut. The sides are festooned with USB 3.0 ports, a Thunderbolt 3 port, a SDXC card reader (bonus points) and a HDMI 2.0 input, perfect for connecting a VR setup.

Moving to the bits of the system we regularly interact with, the 2016 Blade Pro marks the debut of Razer’s new ultra-low-profile mechanical keyboard switches. The screen is a 17.3 inch IGZO multi-touch 4K panel with support for Nvidia’s G-Sync technology. 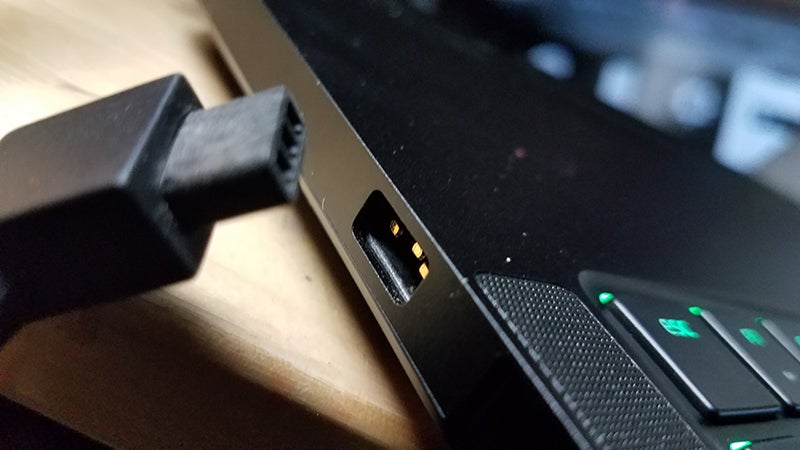 The most noticeable feature change between the new Blade Pro and previous models is the scrapping of the LCD-powered Switchblade interface in favour of a more traditional multi-touch touchpad. Above the touchpad sits a set of multimedia keys and a prominent scroll wheel.

The insides of the 2016 Razer Blade Pro may be led by the Intel Core i7-6700HQ quad-core processor, but the star of the gaming show is the mobile version of Nvidia’s GeForce GTX 1080, AKA the best a gaming laptop can possibly get at the moment. Keeping one of these from getting too hot is a chore on much thicker notebooks. In order to handle the heat, Razer developed the world’s smallest vapour chamber cooling system. This is just a thing Razer engineers do.

The new Blade Pro doesn’t skimp on the other interior components, either. The system comes standard with 32GB of 2133MHz DDR 4 memory, the most ever offered in the line, and solid state drive storage starts at 512GB, configurable up to 2TB. each option consisting or two drives in Raid 0 configuration.

Speaking of pushing limits, the largest capacity lithium ion battery a passenger may carry on an aeroplane is 100 watt hours. The capacity of the Blade Pro’s built-in battery is 99 watt hours.

The version I am reviewing came with the 1TB option, raising the price to £3,799. Plus tax, I guess.

This is about as powerful as a gaming laptop this size is going to get.

What I Did With It

I played a batch of benchmark-friendly fare—Dishonored 2, Watch Dogs 2, Overwatch and the like. I also logged some hours in virtual reality with my Oculus Rift.

Normally it’s just games and general use when I review a Razer Blade system, but with the 2016 Pro I found myself watching a lot of movies and television, for reasons I will explain once we get to that part of the review. Patience.

Gaming Performance: Here is a laptop with a 4K screen that can be used for more than streaming videos. The 2016 Razer Blade Pro won’t have players whipping through their entire PC game library in gorgeous ultra HD at 60 frames per second, but less demanding fare like Blizzard’s Overwatch easily quadruple their pixels and maintain a relatively steady 60 FPS.

Watch Dogs 2 running at 4K Ultra on the Razer Blade Pro. A screenshot proves nothing, I just like 4K screens.

On the opposite end of the spectrum we have Watch Dogs 2, a much more demanding title. At 4K on Ultra settings, the new Blade Pro keeps it a little under 30 FPS. Lower graphics settings enhance performance—I found it perfectly playable on High.

Maxxed out Doom ran in the high 50s at 4K. The Division benchmark gave me high 20s. Dishonored 2 varied wildly, as it does, but kept thing well above 30 at all times. I didn’t bother with Metro: Last Light, because I am tired of explaining what a dick that benchmark is.

Dialling down the bells and whistles by varying degrees, the 2016 Razer Blade Pro can play just about anything at 4K and hit at least a 30 frames per second average, and if you’d rather not compromise your settings, there’s always 1920 x 1080.

Portable Virtual Reality: The new Razer Blade Pro works like a dream with my Oculus Rift. I just plug in the headset and sensors into the USB 3.0 ports, slide in the HDMI cable and I am good to go. It’s granted me the ability to share virtual reality with my friends and family without having to invite them into my messy home, and that’s priceless.

Look How Skinny This Thing Is:

Seriously, look at it. I don’t even have to type a paragraph explaining this.

Display: The 2016 Blade Pro’s 17.3 inch IGZO 4K display is one of the best displays you can put on a laptop. Colours are rich and vibrant, blacks are deep and dark. The panel features 100 percent Adobe RGB coverage, which is great for folks looking to spend a little time editing photos and videos during gaming breaks. It’s so pretty I constantly find myself wanting to touch it. Then I remember it’s also a touch screen, and I touch it more. I am not ashamed.

This time around, Razer’s got a pair of speakers set to either side of the keyboard, along with a pair of thin speaker ports on either side of the housing, and they sound amazing. While waiting for my batch of testing games to install I streamed Max Max from Steam (don’t ask why I own movies on Steam) and the rich soundscape blew me away. We’re talking tangible bass from this sleek little number.

Clicky Keyboard: Outside of awkwardly cramming a full-sized keyboard awkwardly onto an already over-sized laptop, it’s hard to find a gaming laptop with the delightful clickiness of mechanical key caps. Razer’s solution to this issue was to make their own ultra-low-profile mechanical switches, because of course it was.

A thing of clicky beauty.

Once you get used to the low travel distance, a factor necessary for the switches to exist, typing on the new Blade Pro is a delight. It’s a light clicking, loud enough for the user to enjoy the response without annoying folks in the next room. I like it.

Touchpads to the Right: I will admit that even after a week of regular use, my hand still attempts to tap the naked centre area below the Blade Pro’s keyboard, but for the most part I’m comfortable with the unit’s generous multitouch touchpad where it is. It’s not dedicated gaming mouse, but I don’t find myself reaching for an external peripheral as quickly as I normally do with standard laptop touchpad configurations. Plus it has a lighted border, powered by Razer’s Chroma tech.

You could even say it glows.

Best of all, it’s not the LCD screen with customisable LED buttons that used to come on the Blade Pro line, meaning I don’t have to mess with configuring everything, my right hand is never covering a display and the laptop uses less power overall.

Not A Big Fan, But Loud Ones: The 2016 Razer Blade Pro features small, downward-facing internal fans that love to make themselves heard under heavy loads. It’s not as noticeable during louder games, but in those quiet moments it comes seeping through, like a heavy wind through a forest of dead trees. In case that seems like a poetic way to put it, imagine me trying to recreate the whooshing fan noise with my mouth while writing about it, because that’s exactly what I was doing. Whooooosh.

Feel The Heat: While never hot enough to burn, the area between the monitor and keyboard gets mighty toasty during gameplay. It can be kind of pleasant while playing with the laptop in the bathroom on a cold December morning (I don’t know why they keep sending me these things), but extended play with the laptop on your laptop can get quite heated.

Razer has done a good job of keeping the heat isolated to the one area, but I need something besides fan noises in the what I didn’t like section.

There are gaming laptops that offer similar or better performance at a lower price. Those laptops aren’t .88 inches thick or housed within a unibody aluminium shell, and they certainly don’t weigh 3.5 kilos.

Since Razer’s 14 inch laptop took over the Razer Blade name, the Razer Blade Pro felt like it was losing its gaming edge. Recent models felt more like workhorses than high performance machines, aimed at professionals looking for a colourful way to create custom macros for Autocad.

That feeling is gone. This motherfucker right here, you guys. This is the shit.

Abandoning silly ideas like LCD trackpads and affordability, Razer went all-out with the 2016 Razer Blade Pro. It’s got a jaw-droppingly gorgeous display, a revolutionary keyboard, desktop quality sound and the power to readily outperform any laptop with a similar form factor. This is the finest portable gaming PC Razer has produced, worthy of taking over the dusty spot where a gaming desktop once sat.

They should all probably quit now. Go home, be with their families. Their job here is done.