The Last Guardian: The Kotaku Review

If waiting seven years for the third game from Ico and Shadow of the Colossus creator Fumito Ueda has taught us anything, it’s patience, which is exactly what’s needed to see our young hero and his massive catbird companion through to the end of The Last Guardian.

Originally announced in 2009 for a planned release in 2011 on the PlayStation 3, The Last Guardian suffered various delays and setbacks, leading to speculation that the project had been canned entirely. The game finally resurfaced last year, now a PlayStation 4 title with a release date of October 2016. One final delay later and here we are. The Last Guardian is a real game, with a box and everything. 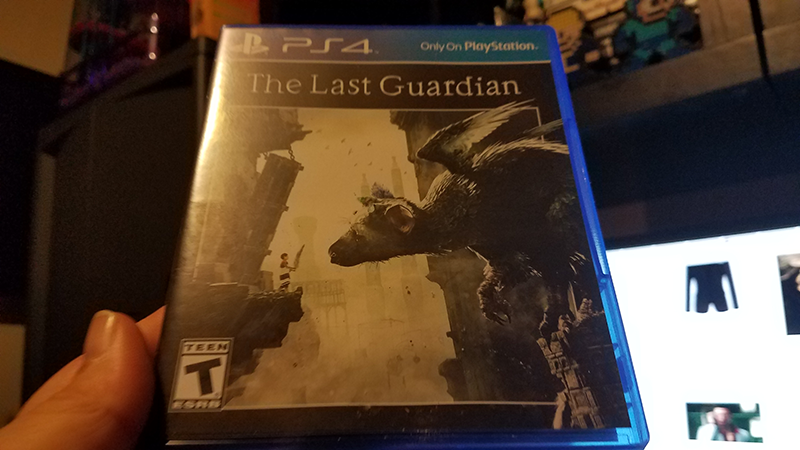 Holding a feather is not something you do in this game, so consider this art a game case exclusive scene.

Considering development began in 2007, that means Team Ico has spent nine years creating The Last Guardian. Normally a development cycle that long might indicate sweeping changes made to the game between its debut and release, but not here. What we saw in 2009 is essentially what we’ve been given in 2016.

As explained by game director Fumito Ueda following the 2015 E3 re-reveal, the game he and his team were building demanded too much of the PlayStation 3 hardware. In 2012 the development shifted to the PlayStation 4, the newer console’s additional power used to finish the game without compromise.

What we’ve wound up with is very much a Team Ico game. Bloom lighting pleasantly washes across crumbling ruins slowly being reclaimed by nature. The sparse musical score lies dormant, awaiting moments of tension or dramatic import to make itself known. The protagonist is a young boy who must make his way through a sprawling fortress riddled with mysterious inhuman enemies using a combination of platforming and puzzle-solving skills. The Last Guardian could very well have been Ico 2, if not for its massive co-star.

The Last Guardian opens with our human protagonist waking on the floor of a massive cavern with no memory of his arrival. Beside him, taking up a substantially larger patch of cave floor, is a gigantic horned and feathered house cat. The boy calls this legendary creature Trico (or “Turiko”). Realising the beast is wounded and hungry, the boy scavenges a few barrels of food, pulls broken spears from its hide and removes the chain binding it to the cavern floor. From that point forward, the pair are nigh inseparable.

At first their interactions are basic. Trico follows the boy as he explores. Sensing some hidden food, the creature sits in front of a high ledge, allowing the boy to clamber up its body, Shadow of the Colossus style. After freeing the food the boy finds a passage hiding a shield covered with glowing symbols. Using that shield to focus sunlight on an obstacle activates Trico’s lightning-firing tail, obliterating the obstruction and allowing the pair to pass.

And everywhere the little boy went, Trico was sure to go.

As the game progresses, so does the relationship between beast and boy. When stone soldiers begin to appear, threatening to drag the boy into some strange netherspace, Trico defends his friend ferociously, tearing into the enemy. When the battle ends it’s the boy’s turn to calm Trico’s fury with calming belly rubs (or whatever-he-can-reach rubs) and heal his wounds.

Then things get complicated. Nearly two hours in, I gained the ability to issue commands to Trico.

As with many aspects of the game, these instructions are purposefully vague.

By holding down the R1 button and either moving or pressing buttons, I was now able to suggest where Trico might want to move or jump or whatnot, should he feel so inclined. It was at this point it became readily apparent that my cat-bird thing wasn’t like other video game companion characters. For better and for worse, Trico has a mind of his own.

Before this point, gameplay was relatively simple. Enter a room, find the way to the next room. If Trico can’t follow, find the means to allow him. If enemies are present, determine how to get Trico into their proximity. If you see a lever, pull it. Pretty simple stuff.

Once commands become available, Trico’s artificial intelligence comes out to play, and it doesn’t always play nice. Following the gameplay demo shown at E3 2015, Fumito Uedo explained that the demonstration had to be prerecorded, as the AI couldn’t be expected to behave in a stage demo-friendly manner.

Sometimes Trico is perfect. He’ll see the ledge I want it to jump to, recognise my character’s hopping motions, and leap gracefully through the air, small boy clinging desperately to his back. That’s a good Trico, making me feel like we’ve reached a new level of understanding.

Other times he’ll make a warbling noise, maybe sniff at the wall I want him to hop over. Maybe, in the middle of a series of complicated jumps, he’ll turn around and go back the way he came. Or perhaps I’ll spend five minutes trying to make it jump to a new area, mistake the creature’s reluctance for misdirection on my part, only to have him immediately make the jump once I’ve spent another five minutes exhausting all other possibilities. That’s a bad Trico, slowing an already leisurely game to a plodding crawl. Good thing we had all of that practice being patient, right?

The unpredictable AI can make for some frustrating moments, but that frustration only enhances the illusion that this strange cat-beast is a living thing. I am not irritated with a video game. I am irritated with my large feathered friend.

In an unearthly castle filled with sinister animated armour, accompanying a small boy with single-tone skin and simple features, Trico is the most realistic creature in The Last Guardian. He moves like a real animal. His feathers shift with his skin as he pads along. Before he jumps he shifts weight between his back legs and hunches down like a cat. When I clamber atop his head and pet between his ears twitch appreciatively.

And the award for most realist cat-bird-creature anus goes to . . .

The fantastic creature’s relative realism helps cement the bond between him and the player’s in-game avatar. Through my 13 hour play through of The Last Guardian I found myself comforted by Trico’s presence. Despite his bouts of mercuriality, I counted on the beast.

The relationship isn’t without its downsides. Being a tiny human often riding atop a massive creature doesn’t do the game’s camera any favours, especially in tight confines. There were moments on our journey where attempting to locate the boy on Trico’s back using camera controls resulted in either a face full of feathers or a completely black screen. Between that and occasionally getting knocked off of platforms by his scaly bird feet, it pays to be mindful of the cat-bird’s position at all times.

The Last Guardian is a slow and thoughtful game. The player spends most of their time opening up paths for Trico through platforming and puzzle-solving. While the boy becomes slightly more active in battles as the game progresses, his main concern is making sure his companion can reach their easily-avoidable enemies in order to swat them down. Should the boy be captured, escape is just a rapid button mashing away.

The remainder of The Last Guardian’s challenge lies is getting Trico to do what you want him to. After describing the creature control ups and downs to a coworker who hadn’t played the game, he said it sounded horrible. But he didn’t know Trico like I know Trico. Time and time again the magnificent beast saved my life, risking his own to remain by my side. The lengths Trico goes to demonstrate his dedication are inspiring. If he wants to spend a couple of minutes sniffing a tower, who am I to deny him?

Eschewing the spare storytelling of previous Team Ico games, The Last Guardian’s plot unfolds in a series of easily digestible cutscenes. It’s a dark fairy tale that probably isn’t quite what anyone expected, but ultimately serves to make the friendship at the core of the game even more remarkable. The Last Guardian is about two lost souls becoming one, and the strength and joy found in that conjunction.

Who could say no to that face?

As with any relationship, there is work involved. Trico and the boy might not always see eye to eye and they aren’t always heading in the same direction, but with understanding and patience the bond they share is sure to stand the test of time.