No Man’s Sky is getting better. The game that left so many people feeling burned back in August may still not live up to the prior months of hype, but yesterday’s patch makes big changes that anchor the game by finally allowing players to build a home among the cosmos.

When No Man’s Sky came out back in August, it was easy to feel lost. The game was vast but shallow, and it didn’t give players much to hold onto. There were few tangible goals beyond crafting more jet fuel. The more planets one uncovered, the less each discovery seemed to matter.

The “Foundation Update”, as the the developers at Hello Games call it, was pushed out to PS4 and PC players on Sunday. It is the first substantial update, arriving after several months of total silence from the game’s developers. Their first major update is a whopper. You can read the full patch notes here, though the term “patch” doesn’t quite feel like the right word. You can watch a video rundown from the developers here:

Most notably, the Foundation Update adds a full base-building system, along with the ability to construct permanent navigation waypoints on planet surfaces and freighters that you can buy and bring with you from system to system. It also gives you three different game modes: the standard way we’ve been playing, a challenging survival mode where resources are limited and you’re expected to die over and over, and a free creation mode where you don’t have to worry about resources or money.

I spent a few hours yesterday playing the updated game on PC, and am impressed so far. I’ve mostly spent time playing my existing game in standard mode, though I spent long enough in survival and creation modes to get a sense of what they’re about. You’ll have to start a new game to try those new modes, and given that I’d become attached to the planets I’ve discovered and named, I mostly wanted to stick with my existing game.

Above all else, the Foundation Update adds anchors to a game that often felt so ephemeral that it might float away. When I reviewed No Man’s Sky, I found that it was a hard game to like. My progress in exploring the universe rarely felt satisfying and permanent. I numbered my planets as I named them. I kept from traveling too far. I backtracked. I stood still. Even then, as hard as I held on, it often felt like my toehold in this infinite galaxy was moments from crumbling away.

After the update, you can have a real, honest-to-god home base. After you make one, it identifies a planet as your home planet. You can drop waypoints and navigate back to them from the far reaches of space. Those additions offset the existential looseness that No Man’s Sky had at launch. No longer do your adventures feel written in sand—you can now plant a flag that even the stiffest tide won’t wash away.

After a few hours with the update, here’s what I’ve found.

Resources seem more scarce across the board

Several times in the few hours I played, I found myself marooned on a planet without enough Plutonium for my ship to take off. This almost never happened to me before, and it seems that resources are far more limited and spread out even in normal mode. I get the sense there’s some plutonium on every planet, but it’s much harder to find, which so far has helped every planet feel more distinct. No longer will you land and immediately see the same fields of blue, red, and gold resources. You’re gonna have to hunt for them. It slows down the pace of the game, but I don’t mind that so far.

Above: The new UI quickbar.

The tweaks to the UI are nice

No Man’s Sky still has a weird user interface, but you can now access a quickbar that lets you charge up your various pieces of gear without retreating to the inventory menu. This makes it easier to, say, recharge your starship shields in the middle of a dogfight with pirates, and saves time when your multi-tool or hazmat suit run out of juice. I’ve noticed some other, smaller tweaks as well — for instance, you can now scan individual planets, which gets you a report on what resources you can find there. You can also make the HUD all but disappear with the touch of a button. All good things.

Yes, you can still time your melee attack straight into a jump in order to lunge forward and skip across a planet’s surface. Yes, it’s still one of the most weirdly satisfying, cobbled-together video game moves of 2016. Thanks, Hello Games, for not removing it.

You can keep playing during the Journey Milestone screen

It is now possible to interact with the game while the letterboxed “Journey Milestone Complete” notification is in progress. Thank god.

Some of my planets have changed

I talked a lot about Moon Drago, Greenpeace and the Cube Forest in my review, and it was interesting to return to those planets after the patch. I found that several of them had changed. Farmville still has a lot of animals, but I could no longer find Ted Cruz among them. I can’t locate a few of my planets, though I could just not be looking in the right place.

Most noticeably, the Cube Forest has completely changed. That planet was covered in Vortex Cubes, which let me mindlessly farm them and make huge profits early in the game. After the patch, the planet has been nerfed. It’s now a barren wasteland. 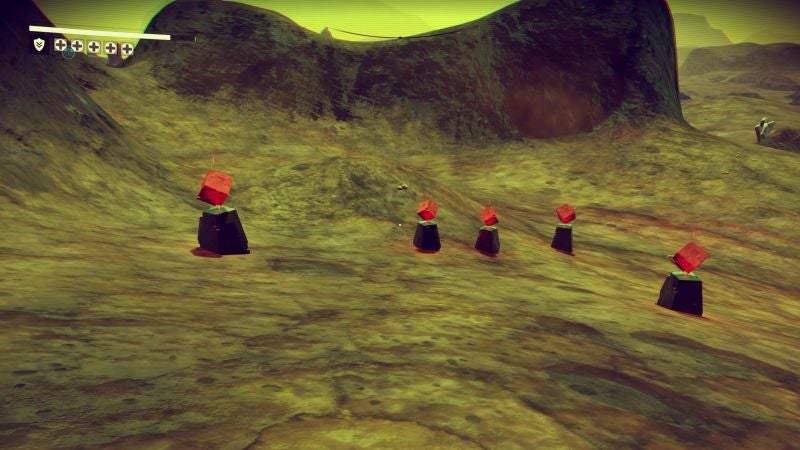 Above: The Cube Forest back when I played in August. Mmm, so many cubes.

Above: The Cube Forest now, after the update. Totally barren, not a cube in sight.

It could be that Hello Games has nerfed planets like The Cube Forest, since their comparative wealth led players to farm them to the exclusion of other, more enjoyable activities until they broke the economy. If that’s the case, I understand the change, even as I’ll miss that planet dearly.

I died almost immediately after setting out from my starting area. This isn’t really what I want from No Man’s Sky, but it’s certainly a more engaging and demanding way to play. It forced me to rely on more of my toolkit, and to use the newly craftable tech like save points and signal boosters, which help you save your progress and find resource depots. I have a feeling some players will really like survival mode.

Creative Mode is another nice option.

It’s also nice that there’s a mode that lets you freely buy, upgrade, and craft whatever you want. You also don’t have to worry about getting killed by anything. That makes it much easier to quickly upgrade your ship and storage, and to get started right away on base building. I like the balance of the standard mode best, but at first glance creative mode seems like a good counterpart to survival mode.

The base building tool is surprisingly easy to use

I’m not a big fan of most of No Man’s Sky’s interface or interaction tools, so I was surprised by how much I like the base crafting tool. It’s a lot easier to use than, say, the jacked-up settlement crafting in Fallout 4, though crafting itself is much simpler here than in that game. Once you’ve claimed a suitable base, you simply select the addition you want to make from the quickbar, place it, and press “A”. Deleting additions is just as easy.

The new teleporters are handy

Every base has a teleporter that allows you to jump out to your system’s space station, where you can trade and recruit workers to staff your base as it expands. The teleporter is one more nice quality of life improvement that greatly reduces the time it takes to get a base up and running. It’s the sort of extra feature that embodies how the Foundation Update goes beyond what it might have been. I can easily imagine a version of this update that made us constantly fly back and forth between our base and a space station; it’s nice that Hello Games took the time to add this feature.

The first freighter I found warped into my system as I mined a nearby asteroid field. (Finally, those fleets of large cruisers are more than window dressing.) It was pretty cool to fly aboard a non-space station vessel in orbit and make my way around. When I found the pilot, they said I could buy their services for seven million credits. Damn! If they hadn’t nerfed The Cube Forest I could’ve come up with that in less than an hour, but it’s gonna take me quite a while longer now. Something to shoot for, I guess.

You can send messages out into the abyss

At any point you can make a communications station, which lets you write a short sentence and send it out to other players. I’m a big fan of this idea, and hope the developers continue to add this kind of passive, asynchronous multiplayer stuff to the game. I don’t really need to explore a planet alongside a friend, but it’s nice to know they’re out there.

It looks a bit nicer

This is a little thing, but the new antialiasing method makes the game look noticeably cleaner to me, at least on PC. The lines on space station interiors are improved, with fewer jaggies. I also like the new motion blur effect, though I’m sure plenty won’t like it. In general, the game looks a tad sharper than it did.

Aliens now hang out in groups

This might be my favourite little change, but you’ll now find groups of aliens hanging out on space stations. Some of them are the garbled encounters you had in the game at launch, others are workers you can recruit for your bases. It’s nice to see aliens hanging out and socialising, and makes the game feel a surprising amount less lonely.

The Foundation Update is a more complete, far-reaching addition than I was expecting, particularly given Hello Games’ radio silence since August. It makes me hopeful about the future of No Man’s Sky, given that Hello Games describes it as “the first of many free updates”. My sense after a few hours is that while it adds depth and allows players to anchor their game with a new degree of permanence, the Foundation Update will ultimately fall short of remedying the broad, shallow aimlessness that left so many cold back when No Man’s Sky came out.

I also sense that that this game’s overarching lack of focus couldn’t have been addressed or “fixed” by any one addition or patch. If this update is anything to go by, No Man’s Sky may gradually become fortified over time as Hello Games adds more systems, features, and modes. It’s a confident step forward. Hopefully the first of many.