The lengthy notes detailing the changes in The Division’s big 1.4 patch last month did not mention the removal of a computer-controlled character who sobbed incessantly. But 1.4 removed her from the Ubisoft game, by popular request.

“Feedback from the community was that players found the weeping ‘annoying,’ so she was removed,” a Ubisoft spokesperson confirmed to Kotaku over email. They said it was the developers’ decision.

As problems go, The Division’s weeping lady was not a damaging one. She didn’t make the game’s shooting less fun, didn’t enable cheating, and didn’t contribute to the difficulty imbalance that so crippled The Division that the developers postponed some DLC to overhaul the entire game. But in ripping The Division apart, the game’s creators at Massive also took time to address some issues that weren’t detailed in 1.4’s 6,400 words of patch notes. One of those issues apparently was this lady. 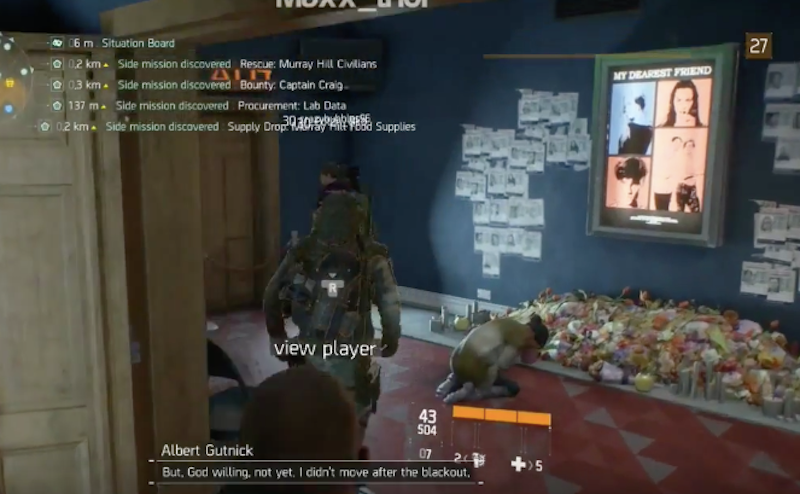 More of the weeping lady, who you can briefly hear around 11:30 of Maxx_thor Game’s YouTube video, screencapped above.

We don’t know the weeping woman’s name. We just know that in a location called the Grindhouse, a movie-theater-turned-survival-shelter, she spent all of her time on her knees sobbing. When players walked to the back of the Grindhouse, there she was, forever curled into a ball, forever weeping. The Grindhouse is quiet, but her crying could be heard down its back hallway.

In the fiction of the world, the weeping lady’s despair made sense. The Division is set in a New York City that’s been ravaged by a biological weapons attack. A lot of people have died.

Given the structure of video games and how non-player characters usually behave, she made sense too. Her job wasn’t to, say, sell newspapers or beg for food to add flavour to the world. Her job was to be noisily sad and do so, like many a game character, while locked in her spot, performing her role.

Since launch, many Division players have complained about her. A GameFAQs thread from last spring titled “The most important thing they need to patch” delivered the punchline: “That damn woman crying continuously in The Grindhouse safe house. Shut up!!” A popular post on 1st April on the game’s Reddit forum entitled ”Poll to Remove the Mourning Lady who cries a lot from the Grindhouse Safe House” was upvoted at a rate of 83%.

Typing this out, the complaints sound harsh, but those who played the game before the 1.4 patch and got to the Grindhouse will likely remember the sounds of constant sobbing. It was distracting, if not necessarily severe enough to mandate deletion. Last March, a player on the game’s official message board noted that were loading their character into the Grindhouse, right beside the weeping lady, right before jumping into the shower: “Could not hear the TV from the shower, and I like long showers. My neighbour however, could hear my TV, and now he thinks I’m some sort of monster that mistreats his wife/girlfriend/significant other. Thanks UBISoft.”

After a rough several months of fan complaints about game balancing issues, The Division’s developers spent the summer more consistently communicating with fans, outlining lots of changes they would bring to the game. Despite that, as best Kotaku understands, they never hinted that they’d remove the weeping lady. Then, once 1.4 hit in October, fans sent their characters to the Grindhouse and discovered a shocking quiet. “They removed the crying lady from the Grindhouse!” a Redditor noted in a thread with an unsurprising 95% upvote rate.

...and she’s gone. This is how the Grindhouse looks after patch 1.4

Indeed, she’s gone. We asked Ubisoft about it, wondering if perhaps there was also a technical reason for her removal. Online, some had speculated that users of lower-end PCs might have gotten stuck on the weeping woman’s character model when loading into the Grindhouse. Players who fast-travel into or respawn inside that safe house load in right near her, and if her model loaded more slowly than the rest of the scene, maybe players were getting caught on her or registering her as an invisible wall. But, no, as readers can see from what Ubisoft told us, she was just sobbing too much.

There are probably poetic things to say about this, about game designers’ ability to end unending sadness. But, really, we’re just seeing game developers remove one of the many, many aggravatingly repetitious non-player characters from games. There’s probably plenty more that developers can patch out, unless, for you, they’re part of the appeal of these virtual worlds.