The Terror of Returning to Animal Crossing After Nearly a Year

Before the Welcome amiibo update dropped earlier this week, I hadn’t played Animal Crossing: New Leaf in seven months. I was nervous to go back in. Would my town be in shambles? Would everyone have left?

In an act of kindness, Isabelle didn’t guilt me over abandoning my town, Dogma, when I returned. Instead, she told me that Dogma had been weeded in my absence. 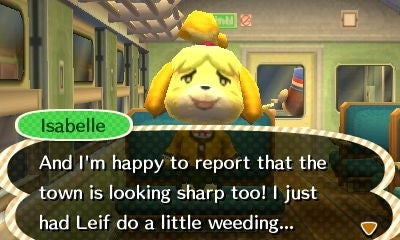 I didn’t realise how much I had missed my town. I still remember all the villagers, my grove of foreign fruits, which fossils I had and didn’t have. The game missed me, too. Mint, a cheerful mint green squirrel that I love dearly, told me never to leave for that long again. I wrote her a letter later that night, apologising for leaving her behind. 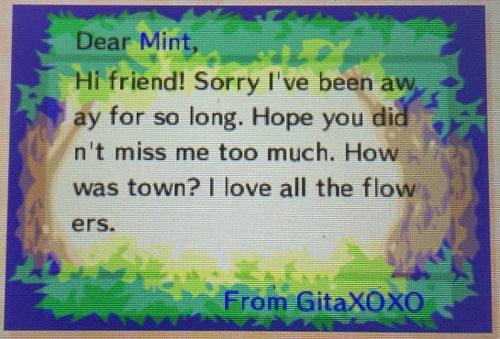 Dogma isn’t the biggest or the fanciest town. I have an unfinished bridge and my main street hasn’t been totally filled out. I am an awful mayor. If I had to run for re-election I’d be fucked.

My favourite villager, Tangy, moved while I was away. I know I have no one to blame but myself, but I wrote her so many letters and gave her so many presents. Couldn’t you have just waited a few more months to say goodbye? Mostly, though, my villagers were happy to have me back. Scoot, an energetic duck, even had sent me a present while I was gone. I, meanwhile, had forgotten he existed. 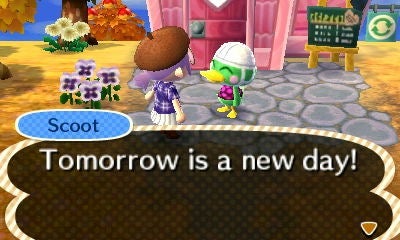 I made a checklist of the letters I needed to write, to make sure everyone felt appreciated. Maybe it would convince some stragglers to not move. When Mint requested a new piece of furniture for her house, I ran back home right away to give her the ranch tea table I wasn’t using, update be damned.

Before I could wallow in nostalgia, Isabelle introduced me to some of the new mechanics in the update, such as the Cat Machine and MEOW coupons. MEOW coupons are a new currency for the game, and which you receive for completing the new Town Initiatives. Once you’ve completed your quests, you head to the Cat Machine to pick them up. MEOW coupons can either be exchanged for bells at the post office or spent at the campground. 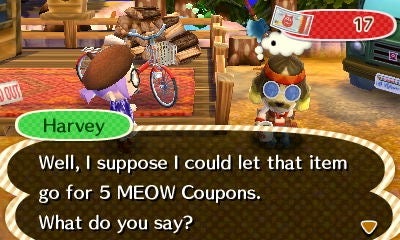 The cutesy nature of the Cat Machine and MEOW coupons are almost too much. Yes, they’re both acronyms, and yes, there’s cat stuff all over the menu screens. Animal Crossing is twee by nature, but this is too much. I couldn’t quite catch what MEOW stood for, but it’s in the vein of love and togetherness and mutual understanding. Look: just call it money. It’s just a different kind of money.

That kind of hippy dippy shit would bother me a lot more if the Campground wasn’t so nice to spend time in. You can exchange MEOW coupons to the rotating cast of villagers camping in RVs to order their furniture, or give them to Harvey, a new character with a small shop. I love Harvey: he just wants to chill out and hawk his wares. While there’s not much to him, his design is expressive and if you visit him throughout the day he’ll find different ways of puttering around. In the morning, he’ll be relaxing with a cup of coffee. At night, he’ll light a bonfire and play the tambourine. 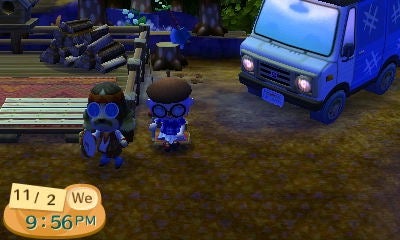 You earn MEOW coupons through finishing Town Initiatives, short quests you’re probably going to do anyway. Over the weekend I’m tasked with catching 20 fish, and before that I picked up a few coupons by going to the Island and completing a tour. I gave some coupons to Harvey today for a new table to put a lamp on. After being away for so long, I couldn’t resist redecorating. A quaint little room full of plants for a quaint little village. 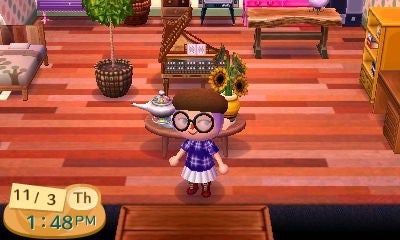 The rest of the features will get rolled out over a period of a few days — I didn’t meet Wisp, the genie who introduces the amiibo support, until this morning. When I tapped my Splatoon amiibo, he turned, briefly, into an inkling. Or, well, sort of. Presumably this will look better with Animal Crossing amiibos rather than ones from other games. 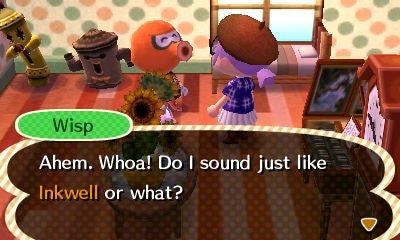 I don’t know what to tell you Wisp.

I didn’t realise that you could only use him once a day, so when I asked him to give me a gift rather than play a game I regretted it. He gave me a scale, and I gave that scale to the resale shop. What are you, Wisp, my mum?

I should be frustrated that I won’t see Wisp until tomorrow, but I find that I like how the new features filter out. Animal Crossing is a leisurely stroll, not a sprint. After a fishing for a few hours I started humming the Kink’s “Village Green Preservation Society,” to myself. God save the village green!

Animal Crossing: New Leaf hasn’t been radically changed. It’s still the same game, and a part of me wishes that there was just a new Animal Crossing instead of an update to the old one. At the same time, the nature of the Campground, the Town Initiatives system and MEOW Coupons is compelling enough to make me want to check back in on my town. Here’s to hoping I won’t leave my town to ruin again.