Shannon I., 23, didn’t want to leave her Baltimore hotel room. For months, she had been looking forward to Otakon, Baltimore’s annual anime convention, and especially to cosplaying Takumi from Fire Emblem Fates. Trimmed in fur, embellished with red string and topped with a white wig, Shannon’s cosplay was impeccable. She had been striving exactly for that effect over course of five days, “waking up and doing nothing else but sewing,” she told me at Otakon last weekend. When I found her, she was with her little sister Kimberly, curled up in a far-flung corner away from the crowds.

“This morning, I didn’t want to put this costume on,” Shannon said. “Maybe it shouldn’t matter to me, but this is not a black character.”

Shannon, like her sister and other black cosplayers interviewed at Otakon, cited her race as a barrier to entry into the cosplay community. It’s not that the cosplay community isn’t welcoming to people of colour—it’s one of the most liberal subsets of the anime and video game communities, a place where craftsmanship and enthusiasm are warmly celebrated. Rather, self-doubt—the internalised fear that, when you put on the skin of your favourite character, your own skin will breach the aesthetic fantasy—can prevent black cosplayers from feeling at ease in cosplay.

Otakon drew over 20,000 anime and video game fans to Baltimore, a city that’s two-thirds black, 50% higher than the US national average. There, visibility for people of colour in the nerd community is strong. But despite the city’s racial makeup, black cosplayers interviewed still felt the internal pressure of marginalisation within the so-called nerd community.

“It’s a lot of internal back and forth,” Kimberly, 20, told me. She was dressed as Rinkah from Fire Emblem Fates, red-eyed with fur cuffs. A chieftain’s daughter, Rinkah is a proud, fierce fighter, qualities that appealed to Kimberly, generally more quiet. For the last six years she’d been cosplaying, Kimberly chose characters whose outfits were more concealing, like Candela from Pokemon’s Team Valor and Katara from Avatar: The Last Airbender. Rinkah, however, wears a cropped tube top, showing off her canonically pale stomach and arms.

“I can look good,” Kimberly said, “but I won’t look as good as someone with a lighter skin tone cosplaying this character.” Cosplayers who enjoy having their picture taken—frankly, most of them—can feel like their crafting efforts were for naught if con attendees don’t recognise who they are. 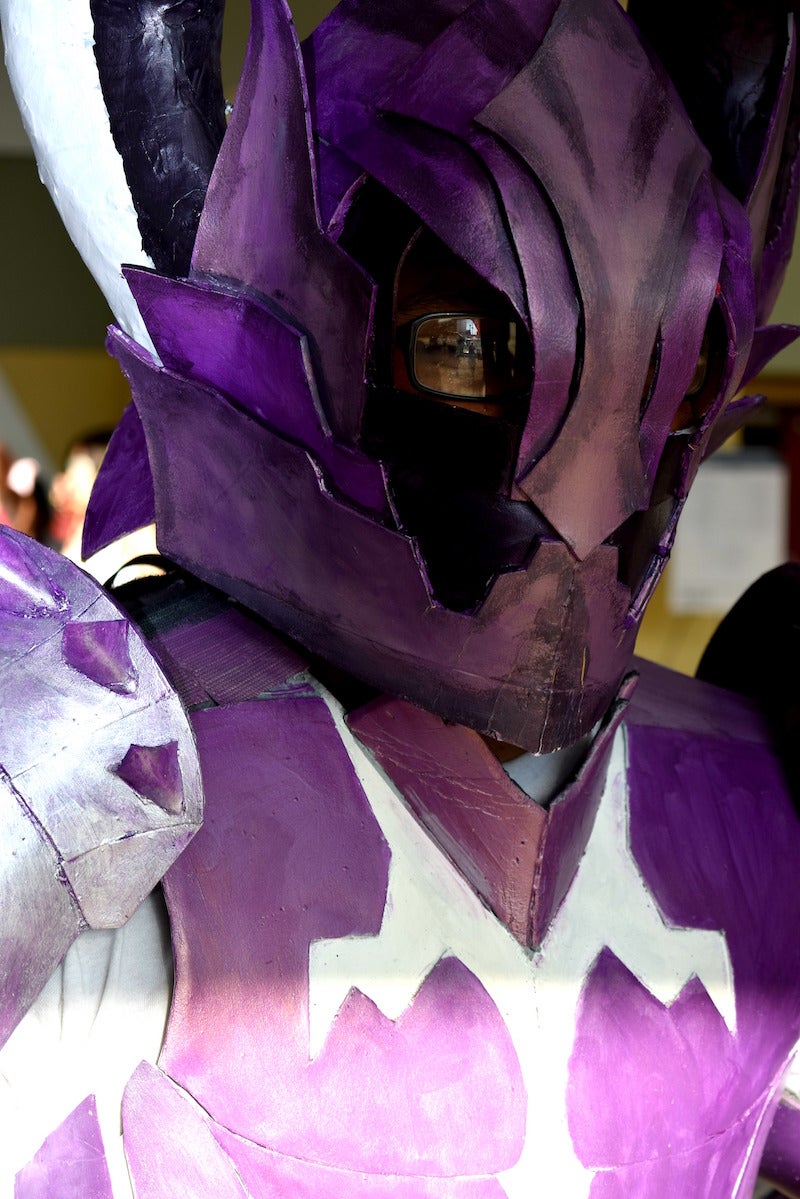 Full-body cosplay allows Marcus C., 26, to stay recognisable. Marcus is a remarkably talented cosplayer who crafted an entire Monster Hunter armour set for Otakon, the culmination of his 7 years of experience. During our conversation, at least three onlookers took him aside to photograph his aubergine-coloured armour set, which included a helmet.

“Any character who wears masks or full armour, I can get away with,” he told me. When asked whether that’s a function of race, he told me, “It’s definitely a hang-up, I’m not gonna lie. I tend to not make things about race, but sometimes, I’m considering a costume, but then it hits me that it might not be received right.” He doesn’t blame onlookers for failing to register his character, thrown-off by differences in race, but accounts for that possibility by letting his outfit speak for itself.

Marcus, like Kimberly and Shannon, cosplays more characters from video games than anime, citing the Japanese cartoons’ dearth of people of color (notable ones including Anthy from Revolutionary Girl Utena, Michiko from Michiko to Hatchin, Afro from Afro Samurai, Mila Rose from Bleach, Geretta from Hunger X Hunter and Karui from Naruto). As kids, many of us grew up with Dragon Ball Z’s Mr. Popo, a dark-skinned slave with puffy red lips; despite the fact that he was not intended to be African-American, he was recoloured blue for American television.

Japan’s population includes fewer than 1% minorities, so the visibility of people of colour in anime is contending against some harsh demographic realities. The popularity of American television abroad could help boost black representation in anime (and has, to some degree). But Juan R. 22, a black cosplayer, explained that American making its way over to Japan doesn’t always portray people of colour in the best light:

“The issue is how Japan sees American culture,” he explained. “Even in American shows, people of colour aren’t main characters a lot of the time. And if you’re in Japan and you’re just going by American television, you’re going to assume there aren’t a lot of minorities in America.” 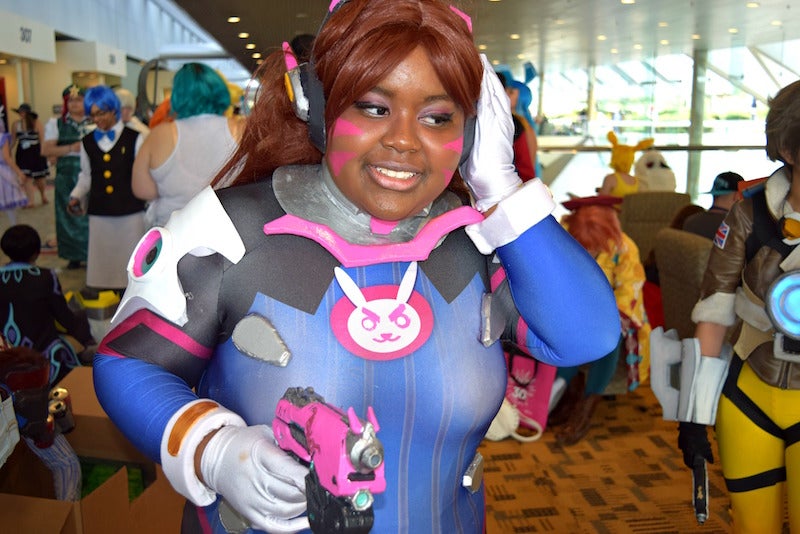 I was wandering around the food area, munching on some stale “Tokyo fried chicken,” when I ran into Sola-Heike, 19, cosplaying Dva from Overwatch, a Korean competitive StarCraft player. She wore a full-body Dva suit, complete with hand-painted armour around her neck and arms, as well as a pink gun and headset. Her eyeshadow even matched her gun. When we sat down outside a cafe after her outside photo shoot, I asked her about history cosplaying.

“I’ve been doing a lot of video game characters recently,” she said. “Once, I was Judal from [the anime] Magi, whose skin is pale. I thought I was doing a really good job, but someone on Tumblr said, ‘Oh, Judal’s been out in the sun too long and ate too many apples.’”

Sola-Heika says she tries to brush off self-doubt, but when she was younger, internal anxiety about how her race would affect her cosplay game made her feel uneasy. In the impending 6 years, she’s picked a lot of darker-skinned video game characters to cosplay, like Aveline from Assassin’s Creed or Red from Transistor, but says that the options are woefully limited. Lately, when she chooses white or Asian-reading characters, she feels the need to go all out with costume design to make up for the racial differences:

“I’ve been worried I don’t look like the people I was cosplaying, so I had to be 20 times better at craftsmanship. I think that’s how a lot of black cosplayers feel,” Sola-Heika said. When she cosplayed Transistor’s Red, she made the costume sparkly, to better compete with cosplayers who look more like the character. That way, Transistor fans would acknowledge her hard work. Often, though, she’d been overlooked, despite her painstaking effort. It’s fine, she reasons. She’s just in it for the fun. 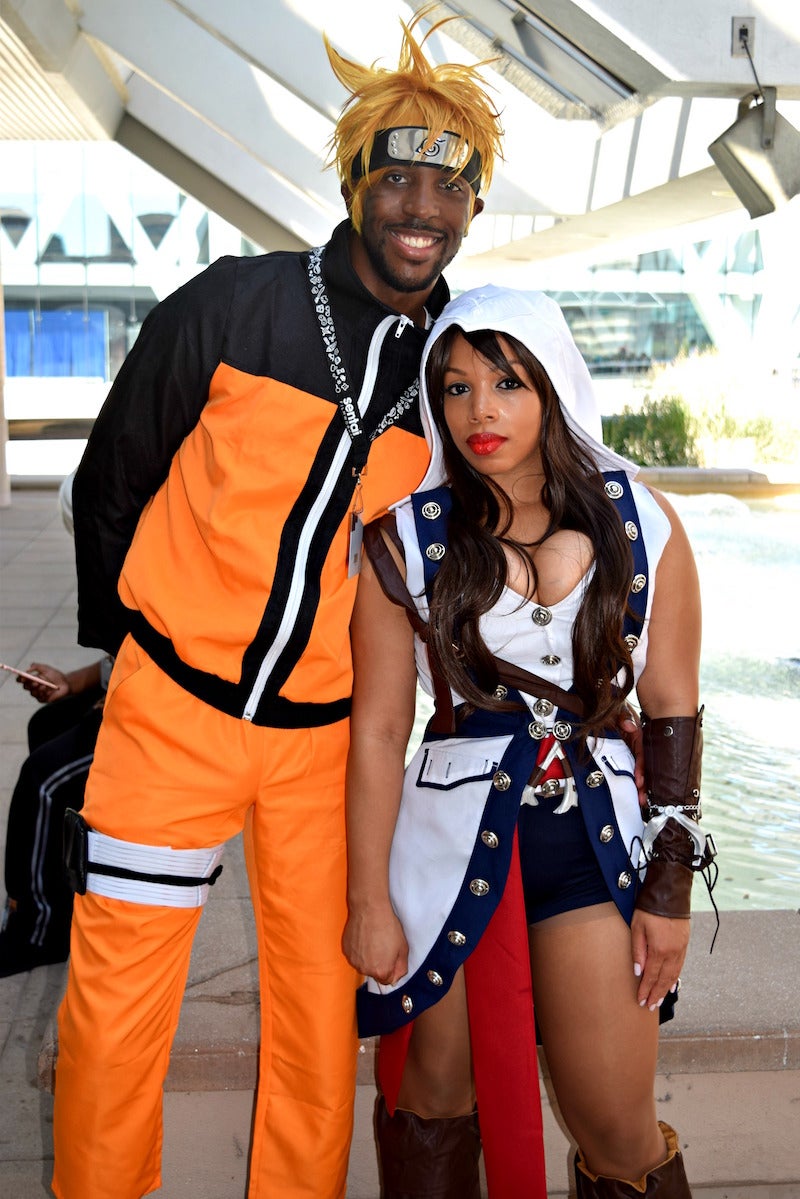 Tavis Snell and Kiya A. Photo by Cecilia D’Anastasio

For Shannon’s part, the fear of her achievements being unsung mired her to her hotel room Saturday morning of Otakon. “I was like, ‘I don’t think I should wear this,’” she told me. “I wanted people to acknowledge the work I put into this character. I just want people to look at me and think, ‘She did a good job,’ and not, ‘The person wearing that is the wrong skin colour for that character.’” When no one says anything to her when she’s cosplaying, her neuroses take over. I knew it. I shouldn’t have done anything at all.

“If Shannon hadn’t done this, I wouldn’t have been as inclined to come to Otakon,” Kimberly said. “If it wasn’t for her, I don’t know if we’d be going to any conventions at all.”