In the years leading up to the much-hyped release of No Man’s Sky, which launched yesterday, director Sean Murray talked several times about players being able to spot one another in the wild. So why hasn’t that happened yet?

Yesterday, two No Man’s Sky players found that they were in the same region of the game’s massive universe, and they both live-streamed their attempts to meet up. Yet no matter what they tried – meeting near a planetary outpost, meeting on a space station, meeting in space – they just couldn’t see one another. At one point, one of the players realised that he didn’t have PS Plus, so he logged off and signed up for Sony’s premium service — still nothing.

This seemed to contradict the claims Murray had made while hyping up the game on press tours, such as this exchange on the Stephen Colbert show:

Colbert: Do we ever get to see ourselves?

Murray: No. You don’t see yourself, so the only way to know what you look like is for somebody else to, you know, to see you.

Colbert: Can you run into other people, other players in the game?

Murray: Yes, but the chances of that are incredibly rare, just because of the size of what we’re building.

In other interviews, Murray repeated that same point several times, telling media outlets that it’d be unlikely for two players to see one another, but that it could definitely happen.

So what was going on? One thing that was clear, while watching players Psytokat and SadCactus stream their encounter, was that they were both in their own instances of the planet. When one player paused the game by entering the menu, the movement of foliage paused with him. When one player tried destroying terrain with a grenade launcher, the other player couldn’t see it.

Some have theorised that Psytokat and SadCactus were impeded by server issues. Others think that despite Murray’s claims, it’s just not possible for players to see one another. And Murray, even while acknowledging the encounter on Twitter, has yet to clear things up: 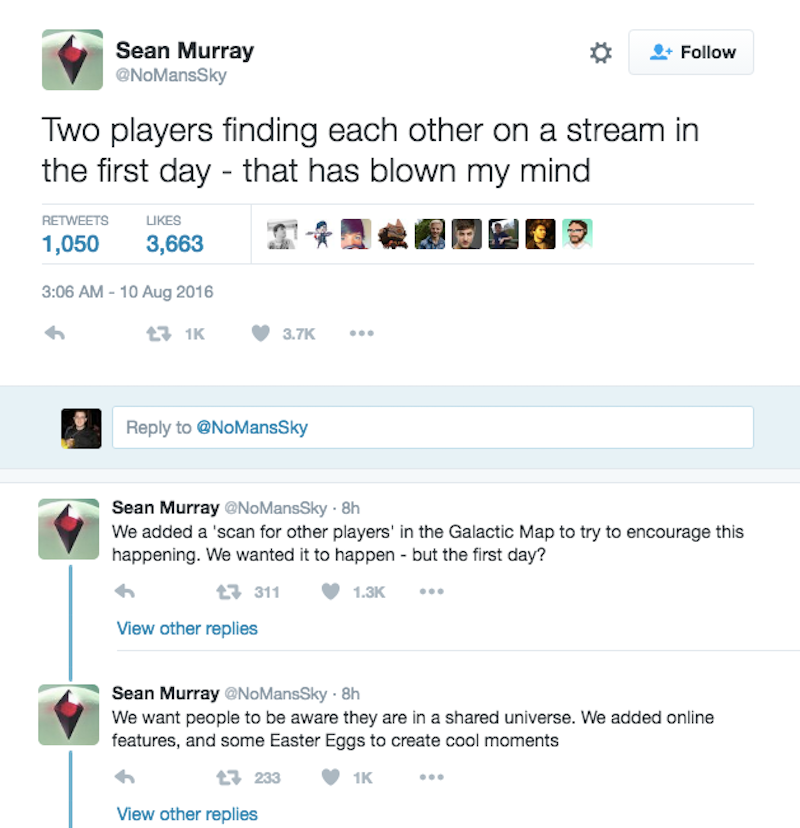 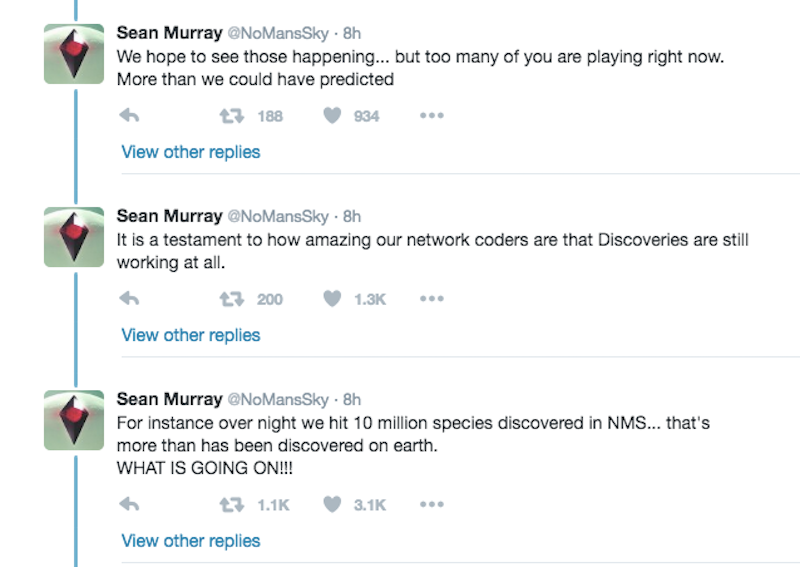 For No Man’s Sky players, this is very frustrating. Does this feature no longer exist? Did it ever exist in the first place? Is it going to be added later? Was it broken because of server overload? Or did Psytokat and SadCactus just miss an important step in the process? As with previous No Man’s Sky PR snafus, some clarification would be very much appreciated, even if the answer is as simple as “we wanted to make it happen, but couldn’t”.

Murray and Hello Games have not returned a request for comment.