About 2,000 Overwatch fans are currently hard at work deciphering the game’s latest clue about the unreleased hero Sombra. Yesterday, Blizzard published a video announcing their Summer Games seasonal event, which, Redditors think, surreptitiously holds new hints about Sombra, allegedly a hacker hero whose name translates to “Shadow.” A day later, these “Game Detectives” have yet to unravel the mystery.

Sombra has been teased for the last few months. In early July, Overwatch’s Game Director Jeff Kaplan told Kotaku reporter Nathan Grayson that “Sombra will let people know when she wants more to be known about her.” Most recently, at the end of the hero Ana’s July 19th developer update video, a few lines of static translated into a QR code that fans converted into the voice line, “Was that easy? Now that I have your attention, let’s make things more difficult.”

That mystery took four hours and seven steps to resolve. Yesterday’s mystery is still opaque, but we’ll update when the Game Detectives figure it out.

What they have found is enigmatic and involved. On the PC trailer for the Summer Games, Tracer jump starts a race, leaving a trail of text in her stead. When deciphered using the Base64 cipher, a new code emerged, prefaced by the word “salted.” This indicates that this new code is, again, encrypted. To decrypt it, the Game Detectives will need to find its “key,” essentially a password.

From the Game Detectives Wiki

Later in the video, the Game Detectives discerned what they believe to be a set of directions and letters associated with certain Overwatch maps. For example, 30 seconds into the video, the word “West” and a downward-pointing arrow are visible behind the hero Symmetra in Watchpoint: Gibraltar. 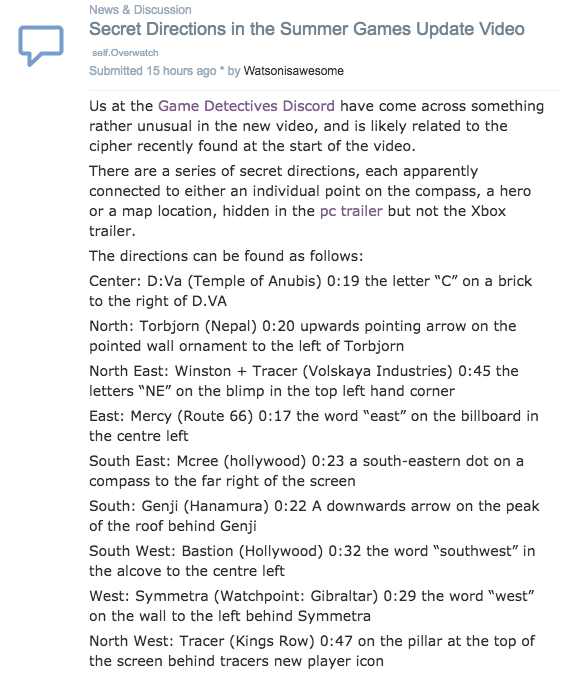 Currently, various theories ranging in viability are flying around (trolling has been reported in the Game Detectives’ Discord chat, feeding off fans’ enthusiasm). We will update when the truth is unearthed.