The Mum Who Moderates Her Daughter’s Rowdy Twitch Chat

“No boobos showing no me watching.”

“Where are ure nipples?”

In fact, a counter on Raihnbowkidz’s channel estimates that her breasts have been mentioned in Twitch chat nearly 30,000 times. Until recently, Raihnbowkidz wore a double push-up bra, highlighting her cleavage for her audience. Viewers would pay real money to have their commentary of her read out loud, much of which was deliberately offensive. Criticisms of her body or gameplay were bolstered by targeted, personal attacks meant to get a rise out of her. Variations on the word “slut” were a common refrain in Raihnbowkidz’s Twitch chat, which, one day, included her mother.

“At first, I was surprised,” Maureen Jomha, 52, remembered when I spoke with her on Skype earlier this week. “She was what you’d call a ‘boobie streamer’, where you’d attract viewers to your stream — trolls — who come to harass or hit on female streamers,” she said.

Jomha is now one of her daughter’s most dedicated Twitch moderators, tasked with keeping Raihnbowkidz’s chat in line so it continues to abide by Twitch’s Terms of Service. And, even after consistently witnessing complete strangers sling some of the most shocking and offensive language possible against her daughter, she is also one of her Raihnbowkidz’s most lenient mods, enforcing the streamer’s “Come at me!” approach to trolls.

Growing up, Raihnbowkidz was one of the more troublesome of her siblings. Jomha said she was forced to be a disciplinarian at times when her daughter would sneak out. Sometimes, Raihnbowkidz would skip school. When she left for college, she barely spoke with her mother for the first year.

“I’m very conservative myself,” Jomha explained. She was raised Catholic, but later converted to Islam when she married her husband. Modesty is her personal preference. Raihnbowkidz never hid the stream from her mother, but understandably didn’t invite her to participate.

One day, unbeknown to Raihnbowkidz, Jomha navigated to Twitch and searched for her daughter’s channel. What she saw was her daughter entertaining a mostly male audience by playing video games in low-cut shirts, making witty gameplay commentary and laughing off trollish comments about her body. When Jomha read the chat, she was shocked to see what viewers were saying to her daughter. For about a week, she lurked on the stream, before, Jomha said, she began to “make myself known in chat”. 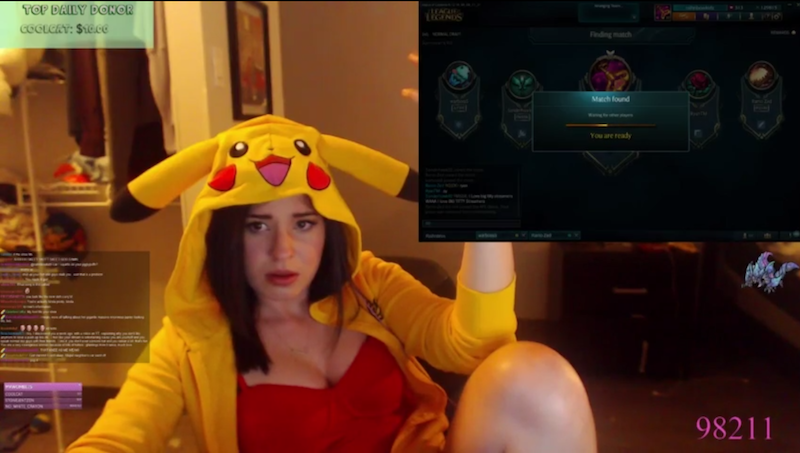 At first, Raihnbowkidz didn’t believe that it was her mother. Of course somebody would impersonate her mum in her Twitch chat. Soon, though, Raihnbowkidz came to understand that her mother was actually there. She actually thought it was funny. Jomha kept watching and participating, bit by bit beginning to respond to trolls and fans in the chat. Raihnbowkidz liked her mother’s commentary and eventually promoted her to moderator.

“We can have more open conversations about things now,” Raihnbowkidz said, “because I’m so crass on stream. That barrier isn’t really there. We can talk about pretty much everything.”

(Raihnbowkidz stopped “boobie streaming” last year because it was taking attention away from her gameplay — she is a Gold 5 League of Legends player. She also just didn’t like watching herself do it.)

Last year, a big League of Legends streamer named Gross Gore featured the still-boobie-streamer Raihnbowkidz on his stream. She earned herself thousands of new fans, one of whom was the ardent Gross Gore himself. To his army of viewers, he referred to Raihnbowkidz in turns as both “beautiful” and a “slut”. When Raihnbowkidz rejected Gross Gore’s advances, his followers flooded her stream with vitriol. Gross Gore was subsequently banned from Twitch for harassment, perhaps on an unrelated matter.

His followers’ comments to Raihnbowkidz, though, were not the kinds of things anyone’s mother should have to hear about her daughter. “GOLD DIGGING WHORE” was a popular line. In the intervening months, Raihnbowkidz has been DDOSed, told to kill herself and called a slut repeatedly.

Although the drama with Gross Gore was an emotional blow to Raihnbowkidz, according to Jomha, the streamers’ response to day-to-day trolling, which she still regularly receives, is humour and satire. When viewers comment on her boobs, she rolls with it. When they tell her she’s bad at games (she’s not), she laughs and agrees. Some say she even invites it. It makes sense; Raihnbowkidz has made subscribing fans out of haters many times over.

“Trolls are a part of the internet environment, you’re cool to burrow here if you would like,” Raihnbowkidz’ Chat Guidelines read, “[b]ans are pretty hard to achieve, if you do get banned its based on the mods discretion. If you do decide to troll, please be creative so it is at least something worth reading in chat”.

As a chat moderator and mother, Jomha’s instincts are to protect her daughter, which, in her capacity as mod, is well within her right. She can time out the harassers, slow their ability to post or even ban them. But Raihnbowkidz maintains that, as an advocate for free speech, viewers should be able to say whatever they want to her. Her only caveat is that she doesn’t allow racism.

After a few days watching her daughter gracefully and satirically combat some of her viewers’ cruder comments, Jomha’s protective instincts waned. She began to understand her daughter’s approach to trolling.

“I was really quite fascinated by her strength and humour. The way she handled trolling won people over, including myself,” Jomha said. “I don’t need to feel protective of her.” What she thought were ad hominem attacks against her daughter, Jomha said, aren’t “hurtful to her. She doesn’t take it seriously. It’s the internet. It’s anonymous. 99% of it isn’t meant. They’re trolling!”

Now, Raihnbowkidz describes her mother as “the most lenient [mod] . . . she got what I was doing”. Once, Jomha had an entire conversation with a viewer about her daughter’s right to show cleavage on screen.

Sometimes, Jomha herself gets trolled. Viewers ask how it feels to be the mother of a whore.

“I’d say, yes, well, I’m a whore too, so she learned well!” Jomha joked. It’s a kind of humour that was alien to her until she became indoctrinated into the world of Twitch streaming. “I learned that the most effective way to deal with hate is with humour.”

Raihnbowkidz has tried to install League of Legends on what her mother refers to as her “dinosaur computer”, but failed. Jomha doesn’t play games, but modding her daughter’s Twitch chat has opened her up to the idea. In the process, she’s also opened herself up to parts of her daughter’s life that most mums don’t get to see.

In Jomha’s eyes, her Raihnbowkidz’s confidence and humour is what has won over even her most vitriolic trolls. It’s what won her over, too. “She’s very free with herself. I’m not comfortable like that. But it works for her and that’s who she is. I don’t see it that way, but I get it, and I love her to death.”