Playing D&D Online Is About To Get Easier

Everything is getting uploaded, including stalwart meatspace occupant Dungeons & Dragons. Today, Roll20, an online “virtual tabletop,” announced its partnership with D&D to offer the the pen-and-paper RPG’s licensed content on their digital platform. Although D&D intellectual property is already accessible on popular digital RPG platform Fantasy Grounds, D&D’s Roll20 collaboration is the latest in the game’s quest for accessibility and social play.

Roll20 is an in-browser tool for long-distance online role-playing. A sort of all-in-one role-playing service with over 1.6 million users, Roll20 wraps up character sheets, dice, maps, rules and other adventuring materials into one simple platform. It even calculates stats and dice rolls for players. Roll20 users can use the video chat feature to talk on-screen, but there’s also a sidebar chat, so the Dungeon Master can whisper secrets to specific players.

Broadening the game’s accessibility beyond hobby shops and friends’ basements, strangers can also join each other’s online games if they don’t have a local Dungeons & Dragons group.

Recently, Dungeons & Dragons been taking great pains to make the game more palatable to new players, streamlining gameplay and emphasizing the game’s social aspect. Before the release of D&D’s 5th edition in 2014, publisher Wizards of the Coast, a subsidiary of Hasbro, opened up the game to player input. By popular demand, the game’s designers untangled D&D’s famously idiosyncratic ruleset, paving the way for a more socially-focused role-playing experience.

Back in edition 3.5, to pull off a grapple attack, players would provoke an attack of opportunity; add together their base attack bonus, strength modifier and special size modifier; make a melee touch attack; and then succeed in an opposed grapple check. The grapple mechanic became a sort of inside joke, a measure for D&D know-how. Now, in 5th edition, a grapple check is just a melee touch attack and a player’s strength versus a monster’s.

(Once, when I went to buy a Dungeon Master’s Guide at a hobby shop, the cashier quizzed me on D&D 3.5’s grapple rules before selling me the book. That guy sucked.) 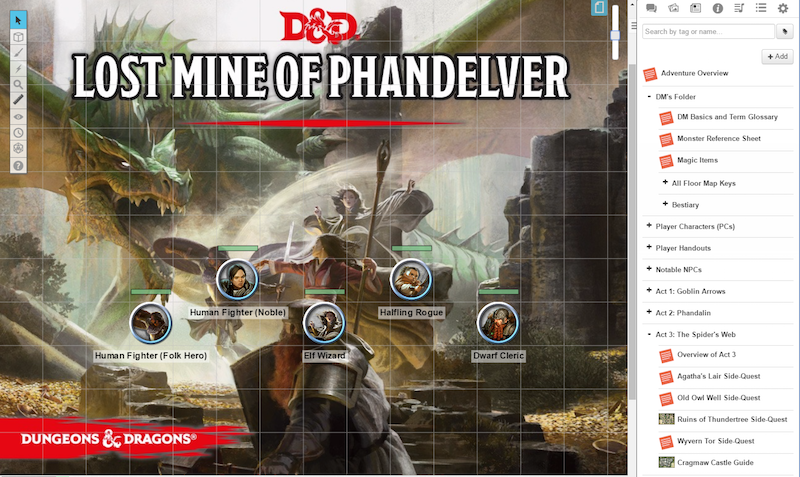 By design, role-playing—what really makes the game worth playing with other people—is now front-and-centre, since the actual ruleset is more easily digestible. 5th edition’s new “Backgrounds” section gives players bonuses for thinking through their backstories. More models for women, people of colour and various body types have been included in the Player’s Handbook, representing people who may have felt alienated from the game’s past incarnations. Also, the Dungeons & Dragons Adventurers League, an “ongoing official organised play campaign,” facilitates in-person role-playing events and has proven to be quite popular for newbies.

Roll20’s partnership with Dungeons & Dragons is the game’s next step toward becoming easy-access. In my mind, Dungeons & Dragons has historically been a bit of a boys club, entrance to which was limited by knowing players IRL who can indoctrinate others. And it’s not just me—the other day, when I spoke with Dungeons & Dragons’ 5th edition lead designer Mike Mearls, he described initial barriers to entry he confronted for a game he now designs:

“When I was a kid growing up, I didn’t really have anybody to play D&D with. During the summers, I didn’t have a car, so I couldn’t meet people and play games with them. I had actually recorded the movie Mazes and Monsters, that anti-D&D movie from the ‘80s with Tom Hanks, I would actually watch that movie again and again and again just to watch them play the fake RPG, just so I’d have exposure to people playing Dungeons & Dragons.”

Roll20’s software, which in 2012 earned nearly $40,000 worth of backing on Kickstarter, capitalises on technology’s ability to bring people together and cut away tedious crap. Now, acclaimed beginner’s adventure Lost Mine of Phandelver is available in full on Roll20 for $20 (£15). Players have access to floor maps, a bestiary, magic items, a term glossary, NPC information and plot overviews. I’ve found that this campaign is a good way to introduce new players to the game, but is a little too classic for my taste in terms of its plot and world-building.

In September, Storm King’s Thunder, which is now available for pre-order, will be released for Roll20.

Mearls added that, while playing face-to-face is ideal, “If you’re in a situation where you can’t find other people to play D&D with, playing remotely does help people fulfil that desire, gives them a positive quality of social connection with other people they wouldn’t otherwise have.”

So if you don’t have any dice-rollers within reach, or you’ve always been a little D&D-curious, log onto Roll20 and see whether you can best the Lost Mine of Phandelver.