Independence Day: Resurgence Is Worse Than Bad. It's Boring

By Patrick Klepek on at 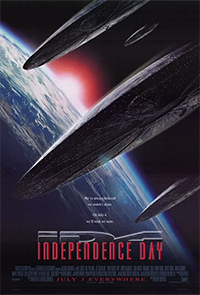 I even had one of the film’s iconic posters, the image above, on my wall for...well, let’s say way too long, OK?

My obsessive youth was the 90s, and in the past few years, it’s become Hollywood’s ripe new target for reboots and sequels. Your time will come, youngsters. Jurassic World wasn’t exactly a good film, one that will stand the test of time, but compared to Jurassic Park III, it was a decent dinosaur flick. (My nostalgia has high standards.) I’m not sure what to make of bringing back Power Rangers, but hey, I like Elizabeth Banks? And like Jurassic Park, I’ve read about Independence Day sequels for what feels like decades. (In this case, it’s true. They really have been trying to make a sequel to Independence Day ever since it came out.)

I genuinely enjoy Independence Day. The jokes still land, the arrival of the ships still inspires a sense of dread, and now married, the scene where Whitmore says goodbye to his wife for the last time chokes me up.

For a film about shit blowing up, the characters are shockingly well-developed. (There’s even a progressive scene where an adult dancer defends their craft!) That’s what differentiates these films: are you only there for the expensive special effects? Given it’s tough to watch Independence Day for the effects now, what holds the film together is rooting for everyone to save the day, even though you know they will.

(I still yell “Welcome to Earth” every. single. time.)

Resurgence brings back many of the main players from the original film, in addition to a slew of new ones. The story ends up servicing neither, jumping through ridiculous narrative hoops to justify their existence. You somehow end up caring less about the characters you once loved and scratching your head at why you’re supposed to invest in everyone else.

One of the original film's charms was how humanity outsmarted the aliens. Sure, the idea that an advanced civilisation would use our satellite system but not realize it was accidentally communicating their plans is a leap, but it felt authentic enough. The film conveyed a sense of craftiness on humanity’s part that was endearing. (It still bothers me that the film portrays the US as the only country with any ideas on how to fight the existential threat, a criticism the sequel does try to address.)

None of that’s in Resurgence. The humans aren’t clever, they’re lucky. They win because the plot demands the story come to an end, not because the characters earned the right to live on. To make matters worse, the final moments of Resurgence are basically an ad for a third film.

The ending to Independence Day, however, is delightfully cheesy.

It was always going to be tough to make a sequel to Independence Day. The fun of an alien invasion film is—surprise!—the invasion. It’s hard to make that surprising a second time, when the humans already know the aliens exist. Do I really want to see another film where they fight the aliens on their own turf? Not really. I’d probably still go see it, though.

(Side note: I would totally watch a film about how humanity left a bunch of tribal groups to deal with a region infested with alien refugees, the most interesting subplot the film has to offer.)

I could keep going, but the film doesn’t deserve it. Though I’d kept expectations for Resurgence low, it still fell beneath my basement-level hopes. Sequels are rarely better than the originals, but at the very least, they can be a fun time at the film. I should have taken a nap instead.