After a breakdown in relations with Konami, after travelling the world to find the right engine, after hundreds of cryptic tweets and endless pictures of food, Hideo Kojima has finally lifted the veil on his new game, his first in a post-Konami world. The response to the reveal trailer has been largely positive, albeit with one Metal Gear Rex-sized caveat: nobody has a bloody clue what it’s actually about.

Is it about time travel? An oil crisis? Will Norman Reedus be naked for the entire game? No one has any answers yet, but if there is one thing we have in abundance, it is theories. Tonnes and tonnes of theories. And as this is Kojima we are talking about, no theory is too outlandish. Here are four of the most interesting.

The Perversion of Nature Theory What’s in a name? While Death Stranding is an obtuse title, it could also be telling. The term ‘Cetacean stranding’ describes a phenomenon whereby aquatic marine mammals strand themselves on a beach and often die due to dehydration from the lack of salt water. In a simplistic view, it’s fish trying to live on land, and thus, the perversion of nature.

In the trailer, we see a beach awash with carcasses. Redditor SomeRandomme posits the idea the ocean could be a representation of The Primordial Soup – the theory that suggests that life started out in water around 3.8 billion years ago following a combination of chemicals from the atmosphere. Only in this instance, the Soup isn’t the bearer of life, it’s the taker. Again, this is the perversion of nature.

There’s a crossed scar on Reedus’s abdomen. One of the theories is that it’s a caesarean section scar, yet another inversion of the natural way of things. But I’d like to take it one step further: what if, in the hopes of repopulating this decaying planet, Reedus’s insides have been replaced with some sort of nanotechnology to create new offspring? That would explain the blackened umbilical cord tying Reedus to the child: it’s a mechanical device synthesised to help feed and grow new life. 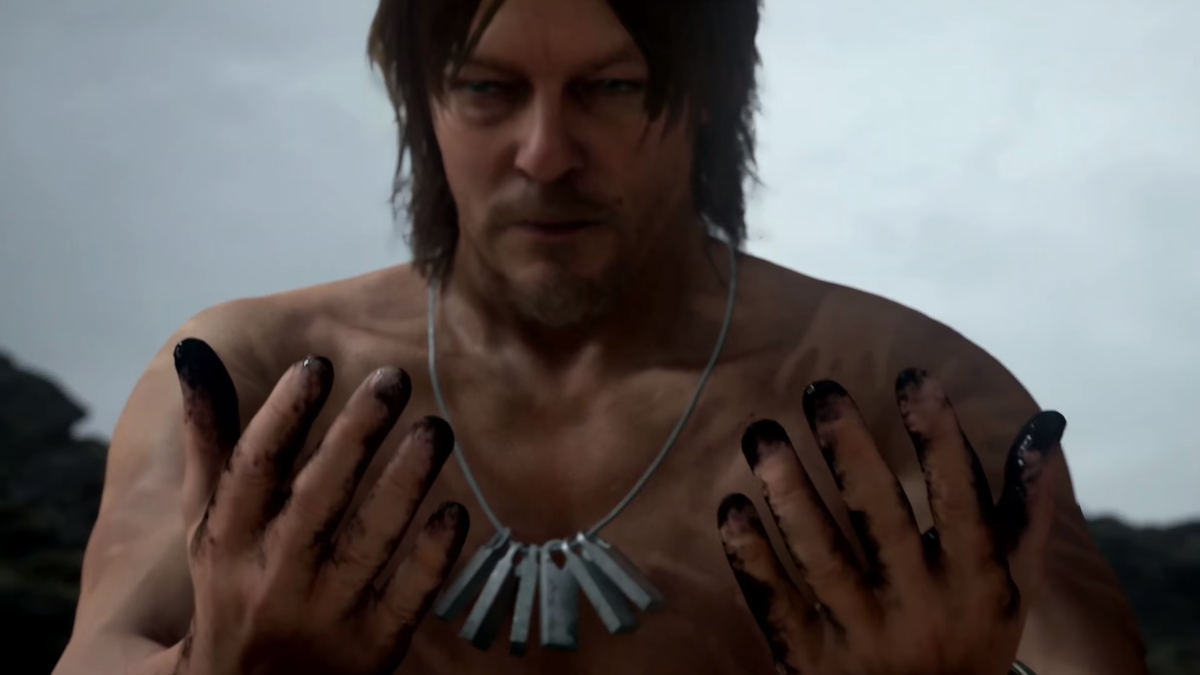 Kojima loves his coded messages with secondary meanings. In Metal Gear Solid V: The Phantom Pain, there’s a mission called Déjà Vu in which the player removes Metal Gear logos from walls and ceilings. Upon removing the first logo, these words appear: “You might be able to remove the markings, but the memories will never disappear…” That quote is, most think, a direct commentary on the way Konami removed Kojima’s name from all of the Phantom Pain promotional artwork.

Keeping that in mind, what if the trailer for Death Stranding isn’t actually a trailer for a game, but another coded message?

One of the first images we see in the trailer is a naked and exposed Norman Reedus surrounded by death. This isn’t literal, but what if death is a metaphor for being burnt out, or for the death of a legacy? As in, the Metal Gear legacy?

A few frames later we see Reedus tied to a baby. Metal Gear was, and always will be, Kojima’s baby; something he was tied to, something he loved, but also something he could never escape. Nowadays Kojima is free of his baby (or was the baby unexpectedly torn from him?). Kojima was unshackled, free to enter a new world (the beach), to spread his legs for the first time in years and explore. What if the hands on Reedus represent all the different people trying to get a piece of Kojima? What if his nakedness represents his vulnerability? 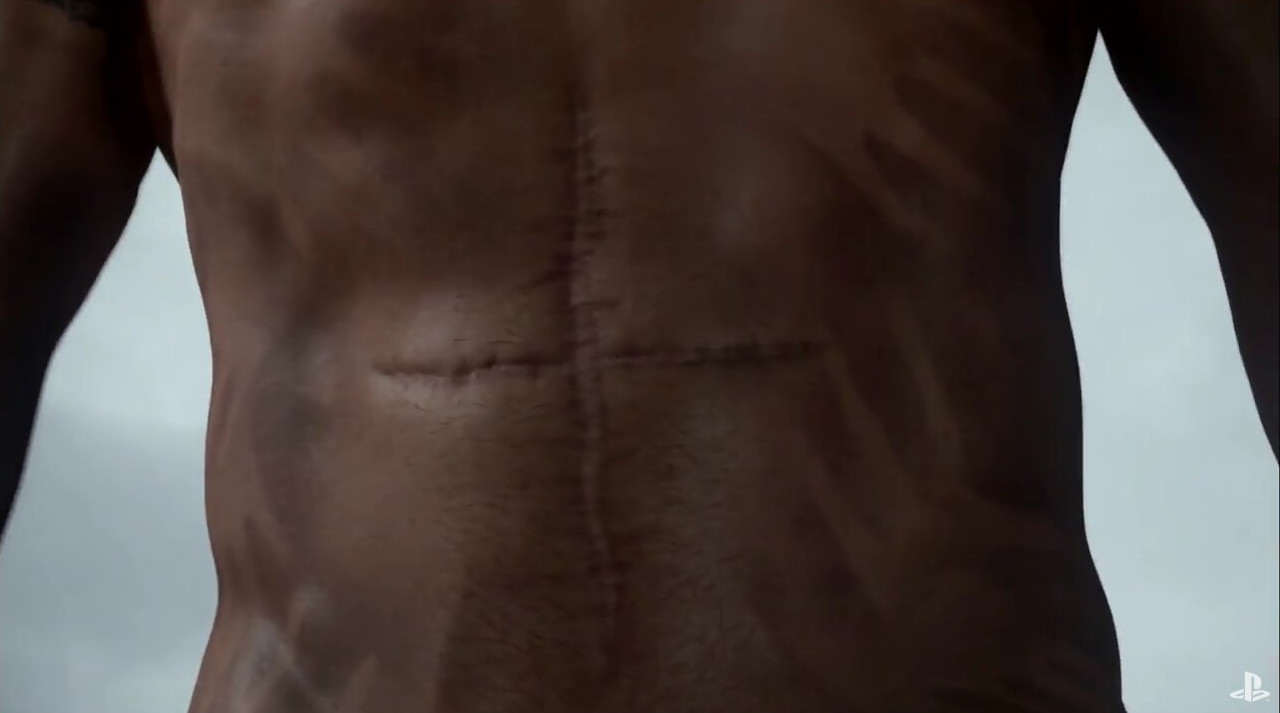 The trailer opens with a passage from William Blake’s poem Auguries of Innocence, taken from The Pickering Manuscript. The poem, while written in no particular order, features multiple paradoxes which all end the same way: in the coming of a great evil. Blake was renowned in The Romantic Age as not only a fighter for equality between the rich and the poor, but also for his (at the time) radical interpretation of Christianity.

Lines from Auguries of Innocence share a lot in common with the Death Stranding trailer. The opening quote of “To see a World in a Grain of Sand”, compares the world with a single piece of sand. To us, the world is the largest surface fathomable. But to God, the Earth is but a grain of sand nuzzled amongst even more sand. The idea here is that Reedus inhabits a world where a great evil has happened, a world where God’s wrath can be seen and felt for miles. Has God given up on this grain of sand in order to focus on a different grain, perhaps one not hell bent on its own destruction?

How does the baby tie into this? The answer is revealed further on in Blake’s poem.

“He who mocks the Infant's Faith

Shall be mock'd in Age & Death.

He who shall teach the Child to Doubt

The rotting Grave shall ne'er get out.

He who respects the Infant's faith

Blake believes all infants are born with faith – that faith is part of human nature –  and those who lead children away from the light are, essentially, damaging humanity in the process. Perhaps the baby represents Reedus’s faith? What if those tears are tears of joy at rediscovering one’s faith? Maybe the hands that stalk Reedus are those of a fallen angel; always reaching out, but never interfering directly? The stitched cross on Reedus’s stomach could be seen as an overt religious symbol.

You can see the trailer as a an interpretation or retelling of William Blake’s Auguries of Innocence through the art of video game. Do keep in mind: Blake brought Dante Alighieri’s The Divine Comedy (see: Dante’s Inferno) to life in watercolours. Is this Kojima doing the same with Blake’s work? God knows. Literally in this case.

According to a recent interview with IGN, Kojima says one of the strongest themes in Death Stranding comes from a short story by Japanese writer and playwright Kobo Abe.

Even though Kojima doesn’t specifically state which short story Death Stranding takes its cues from, a safe bet would be Abe’s 1957 play The Man Who Turned into a Stick.

The play itself is split into three parts. The first, The Suitcase, represents birth through the story of a locked suitcase said to contain a man’s ancestry. The second act, The Cliff of Time, focuses on a determined boxer who must win his next fight in order to stay in the game. It’s about life, or specifically, the meaning of existence.  The third and final chapter of the play, The Man Who Turned into a Stick, is where it gets interesting.

As the story goes, two people hanging out on a street corner are nearly hit by a short piece of sapling. The two proceed to toss the branch to one another until a man and woman approach them and offer to buy the branch off them. The man eventually convinces the two to sell the stick – for fear they’ll be turned into a stick. But in a twist to the story, we later learn the man is actually an agent from hell; the final theme of the ply is death.

Birth. Life. Death. If I were a betting man, if I had to run with only one theory, I’d say Death Stranding is about Birth (the baby), Life (Norman Reedus), and Death (stranding).

Who knows if any of these theories have any bearing on Kojima’s intentions: when you think you have an answer, Kojima has a habit of changing the question. But, if you’re looking for answers in the short-term, the many works of Kobo Abe may be the perfect place to start for anyone attempting to crack the Kojima code.