There are two endings in Uncharted 4, one right after the other. The first is fairly typical. The second is something I’m still getting over, days after I finished the game.

SPOILERS AHEAD. NOTHING BUT SPOILERS.

The first ending, the actual ending, is the one you get after wrapping up the escape from Danger Pirate Island. There’s a tense gameplay sequence (a gentler version of Resident Evil 4's finale) followed by a pair of fairly lengthy cutscenes where everyone pats each other on the back for a job well done and goes off into the night, happy and content that they’ll (hopefully) never have to boost anyone over a high wall ever again.

It’s good! We get some closure, some comedy, we get hints of further adventure from Sam and Sully, we get some more domestic bliss from Nate and Elena. If this had been where the credits roll, this would have been a very acceptable video game ending.

But then, surprise, we get more. A lot more. An epilogue! An honest to God epilogue. The cinematics fade away and the action cuts to a new location, with control suddenly and unexpectedly returned to the player. If you want a recap (or haven’t played this and don’t care), here it is.

It’s very easy to look at this epilogue sequence and think, OK, it’s cute but it’s also just like the intro to Last of Us (where you played as Joel’s daughter), only in reverse. Instead of setting the scene, it’s putting a bow on it. Same developer, same trick.

But it’s so much more than that. Uncharted is a series that fans have been living and loving for almost a decade now, and with this (reportedly) being the final game, at least for these main characters, there was a lot to tie a bow on. If Mass Effect 3's enduring legacy has taught us anything, it’s that long-running series in which fans become emotionally invested in characters and a narrative can have their good work almost entirely undone if you don’t get the end right.

Uncharted 4's epilogue is a brilliant way of addressing this, and every other video game ending that feels unsatisfying and under-cooked. I think the reason so many games leave you hanging at their conclusion is that too many are trying to close out a video game story using another medium’s methods. A game’s writing and characters may help draw us into an experience, but a game by definition is still an interactive creature. We learn as much by poking around in corners, exploring an environment and overcoming obstacles as we do listening to audio logs and watching cutscenes.

Books and comics and TV and movies render us passive, with a story simply presented to us. Games, on the other hand, let you live through your own adventures. 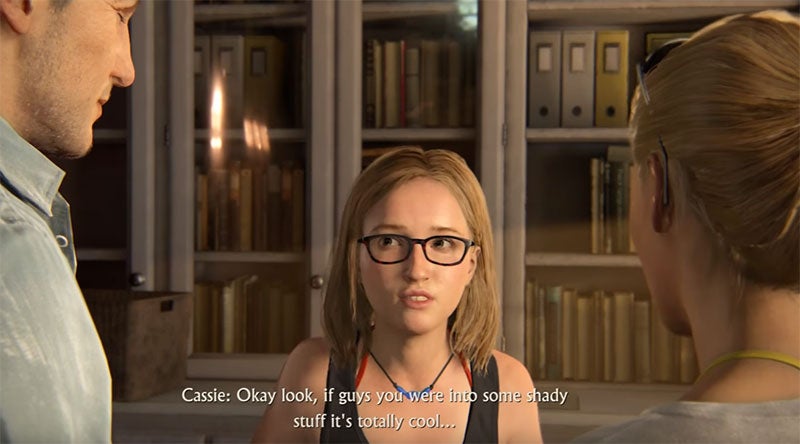 Uncharted 4 realises that this kind of interactivity should extend to its farewell. It’s like Naughty Dog found a way to make a whole little game out of those awesome “what came next” sequences that would always play during the credits of an '80s movie.

Set what must be 12-15 years after the events of Uncharted 4, we open to a scene that quickly lets us assume that we’re playing as Nate and Elena’s kid. A nice surprise, but that’s just the start. It’s what we do as Cassie Drake that makes this such a good time.

Left home alone, Cassie is free to wander the Drake household at leisure. With no cliffs to climb or South Africans left to shoot, it’s a wonderfully sedate experience, as we walk from room to room picking through the trinkets and keepsakes of a family’s life together.

She’s discovering Nate and Elena’s relationship in reverse. Cassie exists in the game as a mirror to our own experiences. While we know the pair as gun-toting tomb raiders, she only knows them as her loving parents. Cassie knows that for the last 15 years they’ve been touring the world as archaeologists and authors, but we’re left to slowly piece this together by thumbing through book covers and pausing at walls of photos.

By the end of the epilogue we’re mostly on the same page, Cassie aware that her parents did some wild shit before she was born, and us fairly clued in that the Drakes are now a very cool couple with a very nice house.

It’s a shared journey of discovery that’s just so fucking video games. Where else could you pull a stunt like this and have it actually work? Be able to link a half-empty photo album that another character encounters early in the game to the same album (now filled out) over a decade later, and use it so masterfully as a story-telling device?

What I love most about it, though, is the way the whole epilogue is structured. Sure, on the surface it’s just a quaint little walk through a few rooms, doing little but tapping a button when prompted. But it’s also one last chance for exploration in Uncharted, at least as we know it. One last voyage of discovery into an unknown place, one last set of secrets to reveal.

Only these aren’t about pirate treasure or lost cities. These secrets are about a pair of rogues that we’ve grown to love over almost ten years of adventuring. And uncovering them doesn’t lead to gold and collapsing ruins. They lead to a fuller understanding — perhaps even a rounding off — of some of video gaming’s most relatable and endearing characters

It would have been so easy for Naughty Dog to screw this up, or to have least left fans thinking “meh” at the conclusion of Nathan Drake’s story. To have fallen back on the assumption that, even were they to be underwhelmed by the finale, fans would look back on four complete (five if you ever played Golden Abyss on the Vita) Uncharted games and remember the journey as a whole, not just the end.

But if Uncharted 4 is remembered for only one thing, it should be the power inherent in ending on such a high. I haven’t been able to get the game out of my head since I finished it, and whenever friends ask me if it’s worth playing (many, like me, were quite down on Uncharted 3), my mind doesn’t skip to trudging through Scotland or a tedious intro. It goes straight to that ending, and the way I sat motionless on my couch for an eternity soaking it up, and how it’s so rare and special that a video game — let alone a breezy blockbuster action series — can pack that kind of punch.