It's Time To Stop Being Salty About Bastion In Overwatch

For months now, some Overwatch players have insisted that one hero is too strong, perhaps even overpowered. Now that the game is officially out and the hero balance is more or less set, however, I hope we can all agree that the bellyaching is all bunk.

Meet Bastion, an automaton capable of turning into a sentry turret at will:

In the right hands, Bastion is a monster capable of wiping out entire teams, often stopping the payload in its tracks, or preventing enemies from getting a foothold on the objective. Bastion, in turn, has gained a reputation among less experienced Overwatch players who don’t know how to counter him:

Bastion practically became a meme for disgruntled Overwatch players, thanks to how often Bastion players get the ‘play of the game’ at the end of a round: 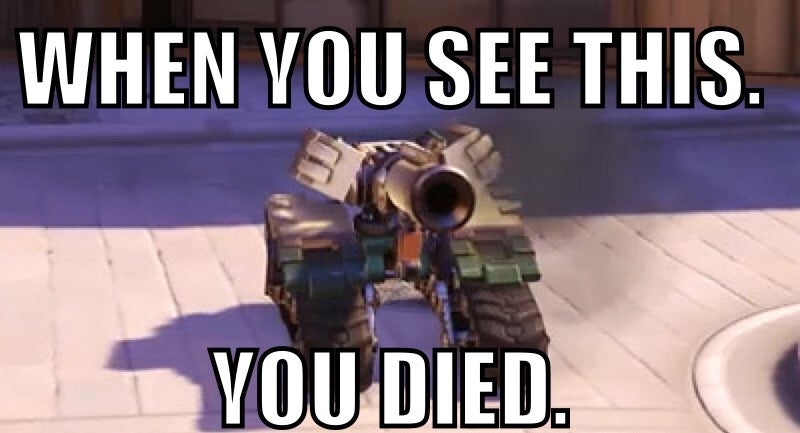 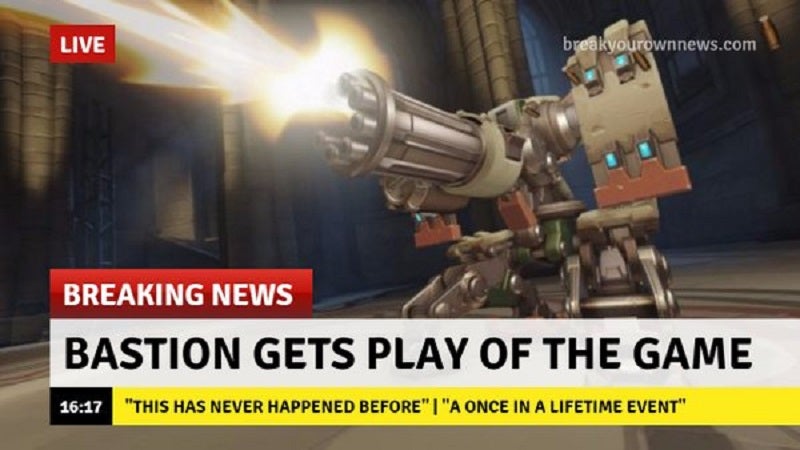 The sense that I got wasn’t just that players hate that Bastion is a good character. Rather, players dislike the idea that it is easy to be powerful with Bastion, even if you’re completely new to the game. Bastion is basically considered like the noob tube of Overwatch.

Blizzard is well aware of how players feel about Bastion, of course. The poor Overwatch support team has found itself endlessly repeating the same advice to frustrated players on Twitter, as you can see in the GIF to the left here.

Blizzard’s advice is pretty good, actually, as it acknowledges that Bastion isn’t overpowered— he’s just a hero that needs to be dealt with in specific ways. Basically, you need to change heroes midmatch to deal with Bastion, and that’s something that new players have trouble with, because it’s easier to stick with characters you already know.

If you go sniper, for example, you can easily pick Bastion off from a distance. And heroes like Genji is the closest thing that Bastion has to a hard counter, thanks to a deflect ability that can send Bastion’s bullets right back. Hell, smart players have even turned Genji into a counter meme against Bastion: 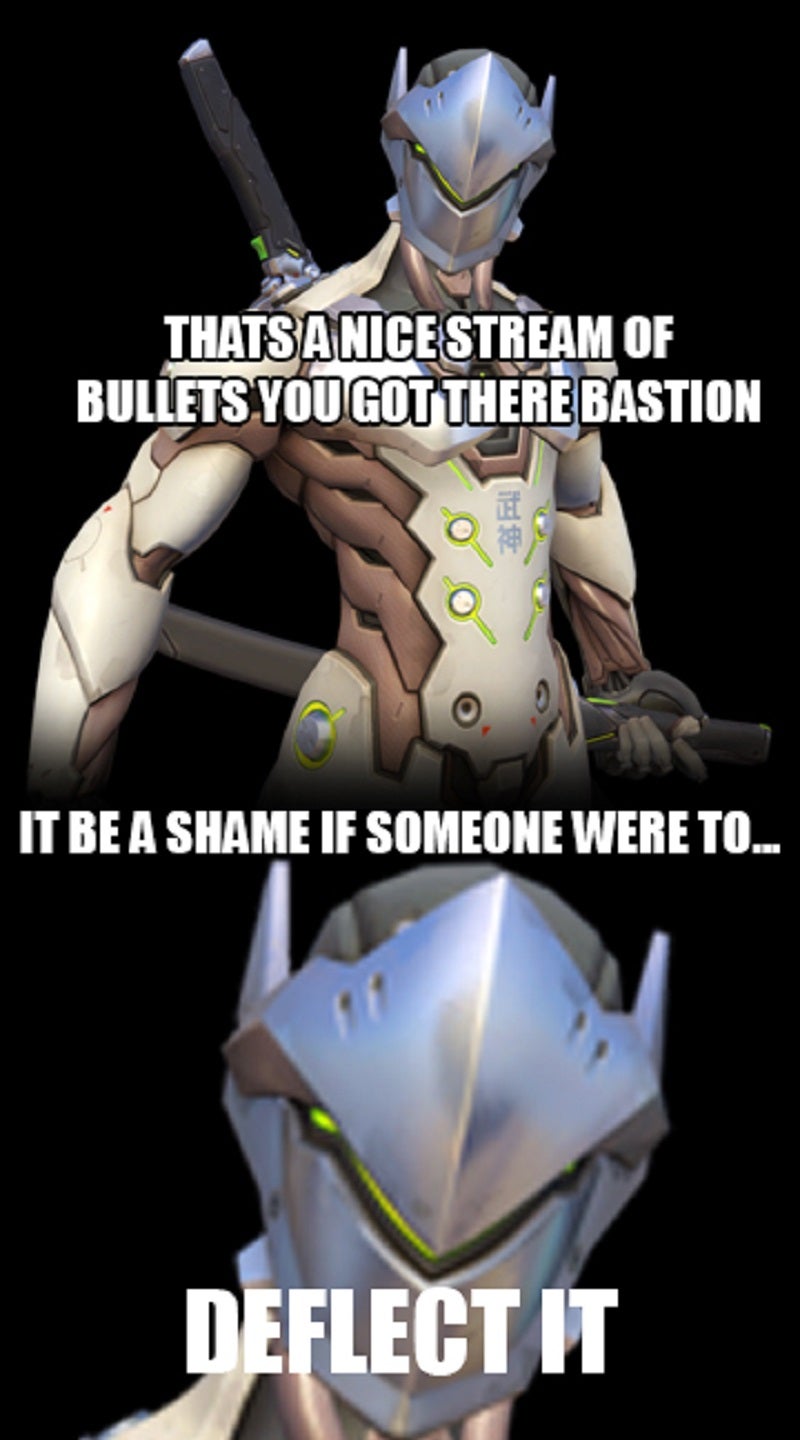 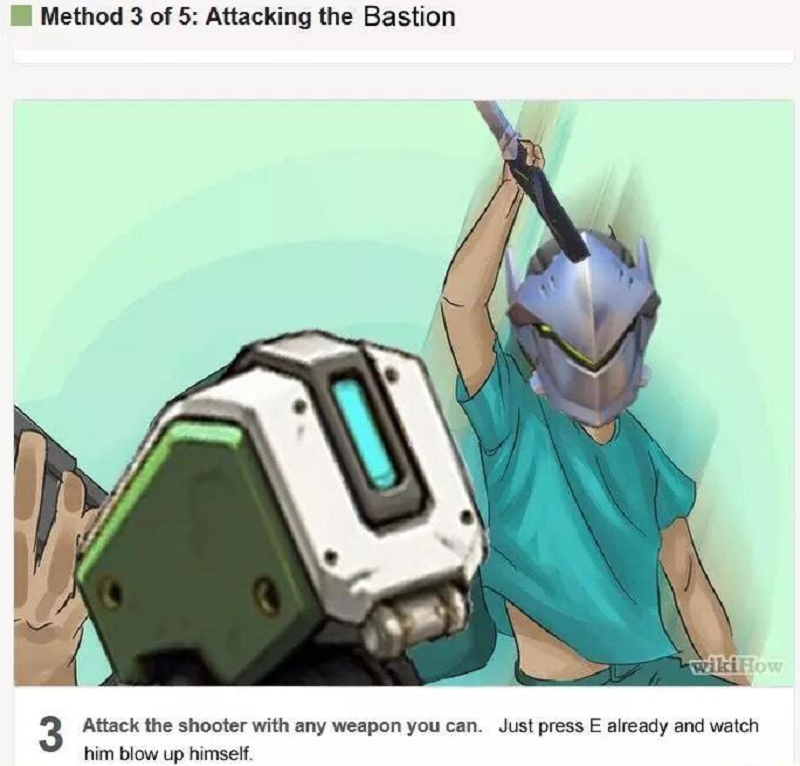 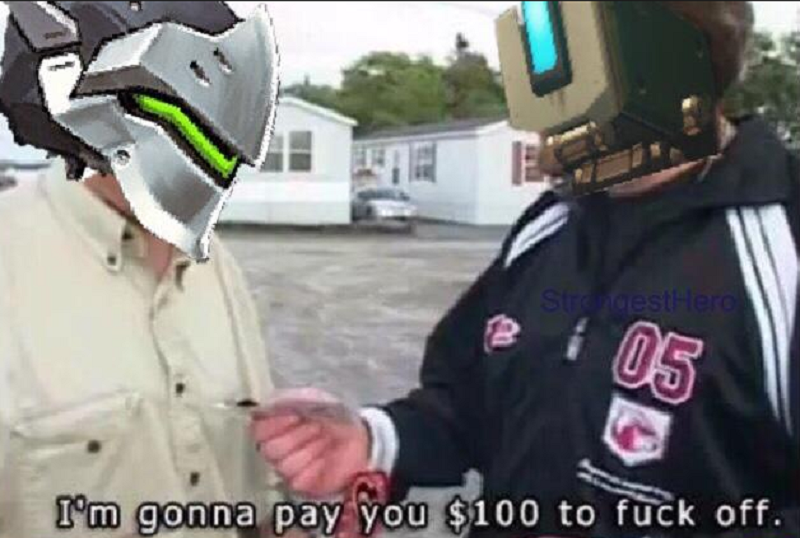 With teamwork, the possibilities to counter Bastion open up even further. A Reinhardt’s shield can help pave the way toward Bastion, and characters like Zarya and Winston also have useful shields in this regard. D.VA can boost around Bastion and get up close. Pharah can go up high and use vantage points to her advantage against a stationary Bastion. There are probably a bunch of other more creative solutions to a Bastion, too, but the point is that he’s not unbeatable. You just have to be smart and tactical.

I’ll be honest: when I started Overwatch, turrets kicked my ass. I would get angry at myself and the game for my poor performance, over and over again. So, I get it. But one of the biggest keys to success in Overwatch is familiarity and understanding of all the characters, not just the ones you think look cool. Every character is capable of being a powerhouse, and you need to be able to dynamically react to whatever people throw at you, not just Bastion. Unless you learn how to be flexible, you’re going to get stomped repeatedly in Overwatch.

The funny thing about getting comfortable with a game is, once you know how everyone works, every trick in the book will become slightly annoying if it is being used against you. Here’s a small sampling of the embarrassing thoughts that have crossed my mind recently while playing Overwatch:

That fucking dragon was nowhere near me, what the fuck!

WHY CAN NOBODY KILL THIS TRACER BY THE SPAWN, OH MY GOD.

Bastion is no longer the bane of my existence, but really, that terrible robot has just gotten replaced with damn near everyone else. Guess I better git gud!