I have never played a game like Offworld Trading Company.

If you go to buy it from a shop, it’ll be listed as a strategy game. If you read up on it, you’ll know that it was designed by Civilization IV’s Soren Johnson. If you look at a screenshot, you’ll see lots of little buildings and spaceships. Put all that together, along with the game’s name, and you’ve probably got a picture in your head of how Offworld Trading Company works.

Now take that picture and throw it in the bin. Because OTC is unlike anything you’ve ever played before, to the point where, even as I write this review, I still can’t quite get my head around the best way to explain it.

Offworld Trading Company is raw capitalism. It’s the open market expressed through gameplay. It’s a video game barely able to contain a thesis on space commerce that bulges at the seams.

To understand how it all feels, I first need to tell you how it all works. You scan the surface of Mars for resources, then build a central base. From there, you take control of individual tiles on the map that contain resources, the key thing being that you can claim any tile, regardless of where it is on the map, so long as someone else hasn’t claimed it first.

So there are no regions, no zones of influence, no borders. Just a mad dash for resources, limited by the fact you can only claim so many tiles before having to upgrade your HQ. Once you’ve got a few and the resources are coming in, that’s when the real meat of OTC kicks in.

You can see the market moving in real-time on the left. Notice the price crashing as I dump excess resources.

You’ll see that the left of the screen here is dominated by a live display of your economy. It’s something you spend 90 per cent of your time looking at, obsessing over inventory levels, market prices and your income flow. Shortages mean you’ll probably need to build new factories/facilities on a new tile, surpluses mean you can sell stuff off for cash.

And once the cash is coming in, we meet another way OTC breaks from the norm. Because this game is only about trade, you can’t win by killing your opponents, or winning them over in an election. In OTC, you have to buy your rivals over. Literally. Aside from some campaign missions, most times you play OTC, whether in skirmish or multiplayer, your goal is to build up enough cash to buy shares in the other player’s companies. Buy a majority stake in a rival and they become your property, providing a nice source of cash flow.

The risk, of course, is that other companies can do the same to you, so OTC games aren’t plodding exercises in exploration and mining. In keeping with the game’s unfettered depiction of capitalism they’re a race to exploit everything you can get your hands on as quickly as you can, while scooping up rivals in an attempt to grow your business and wipe out the competition.

It’s all so fast, which provides a strange kind of excitement, like somebody found a way to make the boring parts of traditional RTS games fun. You can adjust the speed of the game and even pause it (at least in singleplayer), but that’s the easy way out; it’s a lot more fun just letting the market run wild while you grab the reins and try not to end up broke and working for your enemies.

Look at those cute little spaceships.

It doesn’t take long to learn to play OTC, especially since it’s got a fantastic (and funny) set of tutorials. Once you get the hang of how the market works and how you claim tiles, you’re ready to go. And yet the game is still incredibly complex because of the possibilities of what you can do with what looks like a limited array of tools.

You basically have two things at your disposal in OTC: cash and resources. Your first instinct is to sell your resources for cash. And that’s OK! But for more advanced play, remember that this is an open market, and you’re competing against other companies, and each company is selling different amounts of different resources.

Flooding the market with glass may only make you a quick buck, but by driving the price down you may ruin a rival who is relying on it. Likewise, it may be tempting to sell off your food stockpiles since they’re worth so much money, but if you hoard it first you can drive the price up, at the same time depriving a rival who may be broke and unable to afford those steep prices, whether by accident (they don’t have enough water) or design (you can sabotage other player’s facilities).

Cash itself is also more flexible than it first seems. You use cash to buy things, duh. But OTC lets you go into debt, and in a rarity for video games, doesn’t really care unless things get really bad. So while you can always play the old-fashioned way, and wait until you’ve saved up enough money before making upgrades, you can always just write upgrades and builds and resources off as debt, build fast early and pray that your jump on the competition makes you profitable enough later in a game to pay it off.

There are complex and brutal principles at play here, so OTC smartly takes the comedic route in explaining them.

Like I said up top, OTC throws a lot of what you expect of a strategy game out the window. Instead of having time to make plans, you need to move fast. Instead of worrying about units you need to worry about market forces. Indeed, there’s little room for strategy at all; the circumstances of a game can change so often and so rapidly depending on the market that this is more a game about testing your reactions than any grand central plan.

It’s a fresh approach, and it challenges you in ways you don’t normally see in games like this. I can see a wide range of people digging this, from StarCraft II players who know their APM count to Anno and Tycoon fans who like to get down and dirty with a game’s economy.

But it also starts to feel a little shallow after a while. There’s not that much differentiation between the game’s factions, especially given the fact you don’t see stuff like animated leader screens or conduct diplomacy. And every game takes place on the same Mars, with the same resources. Even campaign missions that try to differentiate themselves from skirmishes end up feeling the same: you harvest and build enough stuff to buy more of something than your opponents. That’s it.

Coupled with OTC’s speed and a disappointing campaign mode (a dry series of linked missions which restrict the kinds of tech you can use) this makes games feel quick, disposable, maybe even forgettable. More like a fresh bout of Street Fighter or Call of Duty than a deeper, lasting strategic experience.

Lots of people might be cool with that! Maybe you’re lacking in time, or patience, and like the idea of a strategy game filling the same kind of space as a “one game then bed” kind of shooter or fighter. I couldn’t help but wish there was more to this, though; the developers have uncovered and almost perfected this amazing way of playing the market, but couldn’t find (or afford) a way to dig deeper and make a more substantial experience out of it. 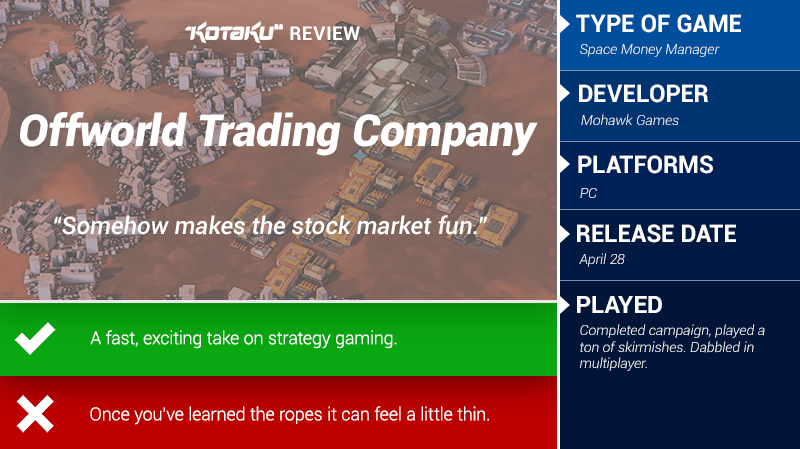 I’ve said before that 2016 is turning into something of a Golden Age for strategy games, with everything from Fire Emblem to XCOM 2 to Soviet Corps to The Banner Saga 2 being absolutely amazing refinements of classic design. OTC goes the other way, throwing out the rulebook and creating something truly new, but is just as worthy of praise for what it’s come up with.