Most fans know Garth Ennis as the co-creator of signature series like Preacher or killer runs on the Punisher. But he’s also written a slew of crackin’ good war comics as well. His next return to battlefield-centred sequential storytelling comes via the biggest military video game in the world.

Starting this fall, Dark Horse Comics will be publishing a five-issue called World of Tanks: Roll Out written by Ennis and drawn by frequent collaborator Carlos Ezquerra. The series takes place in the aftermath of the 1944 D-Day invasion of Normandy, focusing on the skirmishes between British and German tank crews. In the e-mail interview that follows, Ennis holds forth on what people get wrong about aerial dogfights, the difference between American war comics and which actor should play the leader of DC Comics’ most disgusting superhero team.

Kotaku: Your love of military history is pretty well-known but your war comics always feel like they’re meticulously researched on top of that. Can you remember anything that you came across while doing research that made you think you HAD to work it into a story?

Ennis: That happens with almost every history book I read whether it be some mind-bending incident or useful little detail. A good sampler would be Max Hastings’ book, All Hell Let Loose, in which I found something I wanted to write about on practically every page.

Kotaku: How familiar were you with the Wargaming franchises before taking on this work? What’s impressed you most about their approach to recreating military vehicles from decades ago?

Ennis: I probably know even less about modern wargaming than I do about computer games in general. But I was impressed by their attention to detail, particularly some of the research videos I found on YouTube. And I was glad they weren’t asking me to write nonsense: no tanks from different eras encountering each other, or tanks fighting giant robots or dinosaurs.

Kotaku: What do you see as the difference between old-school American war comics and their British counterparts?

Ennis: When I eventually read some American war comics—in my late teens—I found them very odd. There’s a weird hyperbole to stuff like Sgt. Rock that makes it pretty unrelatable to me. Even before you get into the viking princes or dinosaur islands, you’ve got this breathless, almost hysterical narration and tone that leaves me pretty cold. It’s also largely fantasy, almost the military equivalent of superhero stories. You get beautiful art by Joe Kubert and Russ Heath illustrating stories that end in bloodless fistfights between Easy Co. and German units. 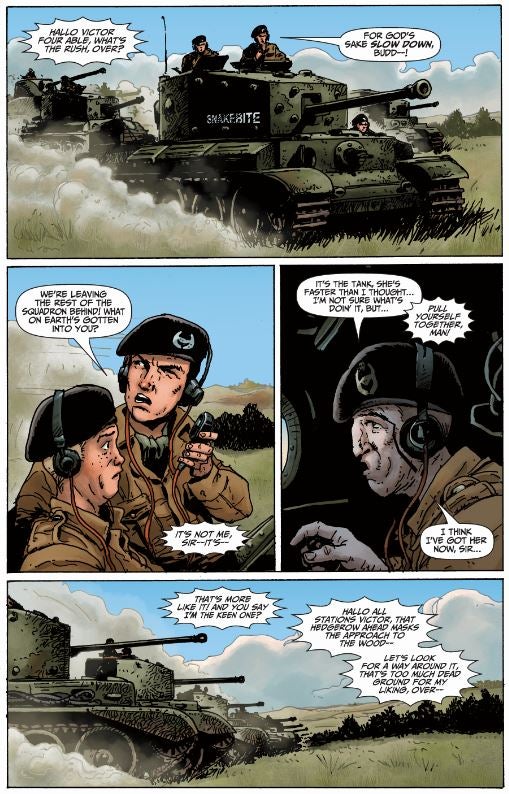 I suppose that, just like superhero comics, I came to these things too late in life and had no childhood nostalgia for them to aid my suspension of disbelief. By taking out a lot of the weirder stuff, I was able to produce a half-decent Enemy Ace story about twenty years back. But I’m much happier doing my own war stories. That kind of baggage just isn’t an issue.

As for British war comics, the ones I read as a kid varied wildly. Some were just as unlikely as their US counterparts, but in a slightly different way: that hysterical tone wasn’t really there, and what you got instead was a sort of steady mediocrity. Others were a bit better, with good concepts that were occasionally given a chance to shine. Then there was the really great stuff, all of it in Battle—Darkie’s Mob, HMS Nightshade, Johnny Red. And also in Battle was what to my mind is the greatest comic strip of all time- Charley’s War.

Kotaku: You’ve been taken up in the air on WWII-era aircraft for fun. Which models and what battles were they used in? What do you think are the biggest misconceptions that have been passed on about those flying machines?

Ennis: I’ve had a handful of flights in WW2 aircraft. There’s no denying it’s good fun, but the experience and insight you get from a flight in a Spitfire or P-40, or a Lancaster or B-17, is simply invaluable when it comes to writing war fiction. And, also, breathtaking.

If there’s one overriding misconception about aerial combat, it’s probably the comparison with a medieval joust or other single combat, with the pilot cast in the role of chivalric knight. In fact, it’s far more like an assassination; the idea is to sneak up on the opponent and kill him before he even knows he’s got company. Which, given the lousy visibility from all but the most modern fighters, was easier than you might think.

Kotaku: I was at the Preacher screening at South by Southwest and heard you cracking up during the pilot. Which part of it startled or entertained you the most?

Ennis: I think my favourite bit is when Jesse finally cuts loose and takes out his frustration on the bar full of rednecks.

Kotaku: Let’s say the muckety-mucks at Warner Bros get hit by lightning and decide to do an adaptation of Section Eight. What actor would you love to see play Sixpack?

Ennis: I think it has to be Mel Gibson, don’t you?